Accessibility links
Who Is Steve Scalise? Congressman Shot In Virginia At GOP Baseball Practice Scalise, a former systems engineer, served for 12 years in the Louisiana Legislature before being elected to the House. He was playing second base when he was shot in the hip on Wednesday. 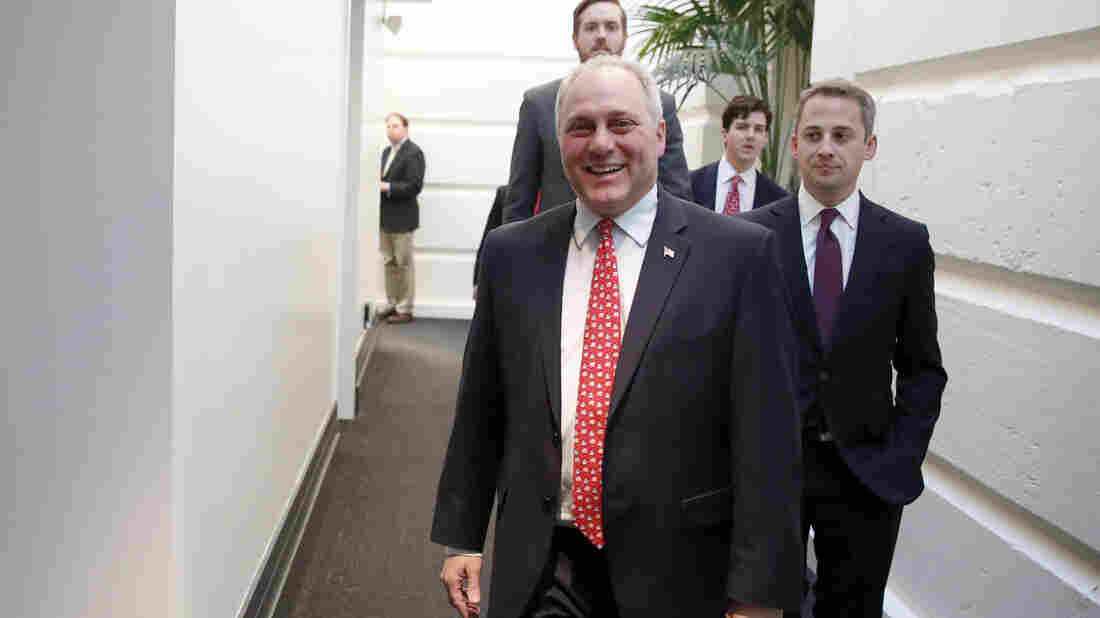 Majority Whip Steve Scalise arrives for a Republican caucus meeting on Capitol Hill in March. Scalise was playing second base at a congressional baseball team practice Wednesday morning when he was shot. Alex Brandon/AP hide caption 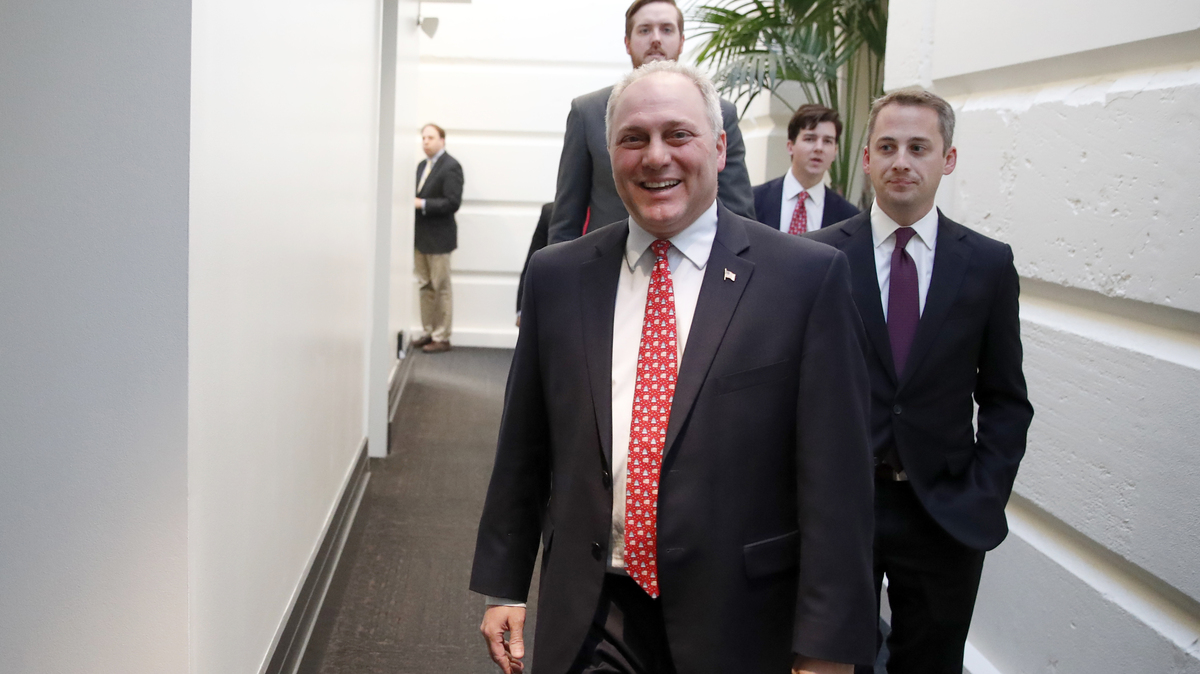 Majority Whip Steve Scalise arrives for a Republican caucus meeting on Capitol Hill in March. Scalise was playing second base at a congressional baseball team practice Wednesday morning when he was shot.

A shooting Wednesday morning at a baseball field in Alexandria, Va., left the third-highest-ranking member of the House of Representatives lying at the edge of the outfield with a gun wound to his hip. The shooter has died, President Trump announced.

Steve Scalise, the House majority whip, headed into surgery at a hospital in Washington at 10 a.m., according to a statement from his office. He remained "in critical condition" as of 8:15 p.m., according to a statement from the hospital, following a surgery and multiple blood transfusions, with more operations to come. The bullet that struck his left hip traveled across his pelvis, "fracturing bones, injuring internal organs, and causing severe bleeding," the hospital said.

When the shooting started earlier that morning, he was playing second base, his normal position on the congressional baseball team.

"All of a sudden, we heard a loud, what sounded like a gunshot, very loud and very close," Sen. Jeff Flake, R-Ariz., told NPR's Morning Edition. "[Scalise] went down and dragged himself off of the infield into the outfield about 10 or 15 yards and was laying motionless out there."

Rep. Brad Wenstrup, a doctor, plays on the team and was among the first out to Scalise to apply pressure to the wound, according to CNN. Capitol Police were also on hand because Scalise was present, NPR's Scott Horsley reports, and exchanged gunfire with the suspect. Two officers were wounded, and lawmakers and the president said the outcome would have been worse if they were not there.

At a press conference Wednesday morning, House Majority Leader Kevin McCarthy was "visibly emotional," according to The Washington Post:

"Asked about Scalise, McCarthy started to well up.

" 'I've known Steve since Young Republicans. Long before we ever served in the House,' he said before walking away."

Scalise is married and has two children. According to his office, he spoke to his wife by phone before going into surgery.

As a father, these are priceless moments I cherish. Happy birthday, son! #ProudDad pic.twitter.com/lUR9NLbQDV

A highly popular politician in Louisiana, Scalise, 51, represents the state's 1st Congressional District. He was elected in 2008 in a special election to replace Bobby Jindal, who had just been elected governor.

The former systems engineer got his start in politics at Louisiana State University, where he was twice elected speaker of LSU's Student Government Association. He served as a member of Louisiana's state Legislature for 12 years before being elected to the U.S. House.

The turning point in his career was a 2012 win that made him chairman of the influential Republican Study Group. He beat Rep. Tom Graves, R-Ga., who had been unanimously recommended by the group's founders prior to the election.

After his victory, Scalise told reporters that his goal would be to pull Republican leadership "as far to the right" as possible.

"There are going to be times when we disagree with our leadership, but ultimately, we've got to work hard to pull our leadership to the right," Scalise said, according to The Hill, "and to move a conservative agenda forward and unite as conservatives if we're going to get things done."

Two years later, he won the race for the House majority's third-highest position. Scalise ran for majority whip against Peter Roskam of Illinois and Marlin Stutzman of Indiana, after the former whip, McCarthy, was elected majority leader.

"Scalise was the more conservative voice many members have been clamoring for and he's from a red state," NPR's Ailsa Chang reported at the time.

What Is The Congressional Baseball Game?

Right around the same time, the congressman came under scrutiny when it was revealed he may have inadvertently spoken at an event organized by a white supremacist group when he was a state representative.

"I didn't know who all of these groups were and I detest any kind of hate group," he told the New Orleans Times-Picayune at the time. "At the end of the day, you are judged by your character. And look, I'm proud of my record of working to help people throughout my years of public service."

Louisiana has gone for the Republican presidential candidate every election since 2000. Even so, Scalise wasn't an early endorser of Trump last year. Once he committed, however, he stayed that way even as negative press rained down on Trump in the months leading up to the election.