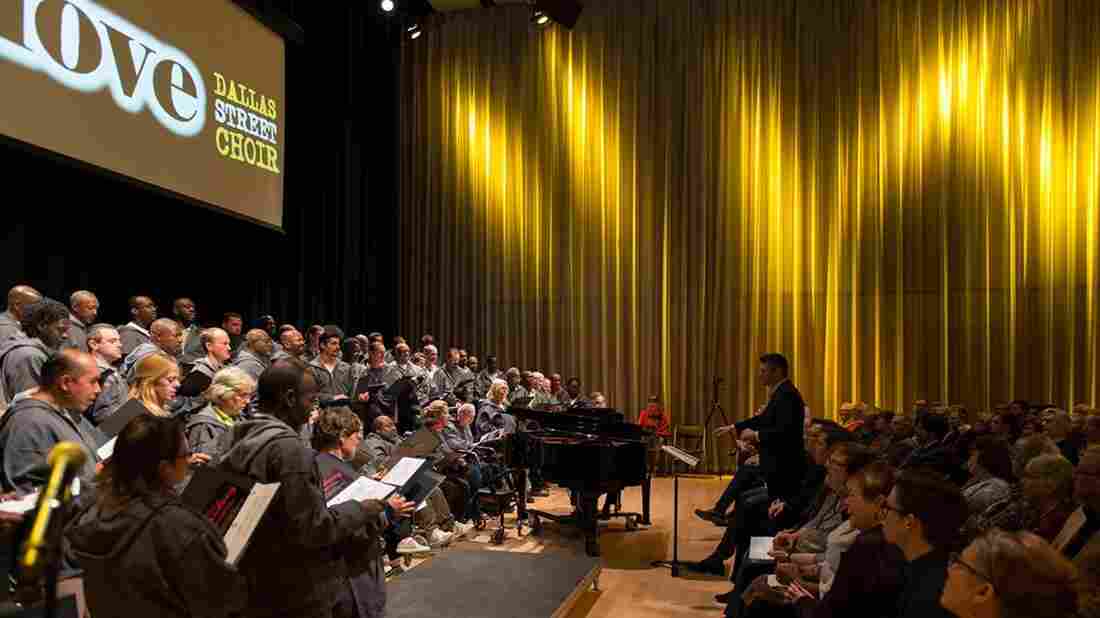 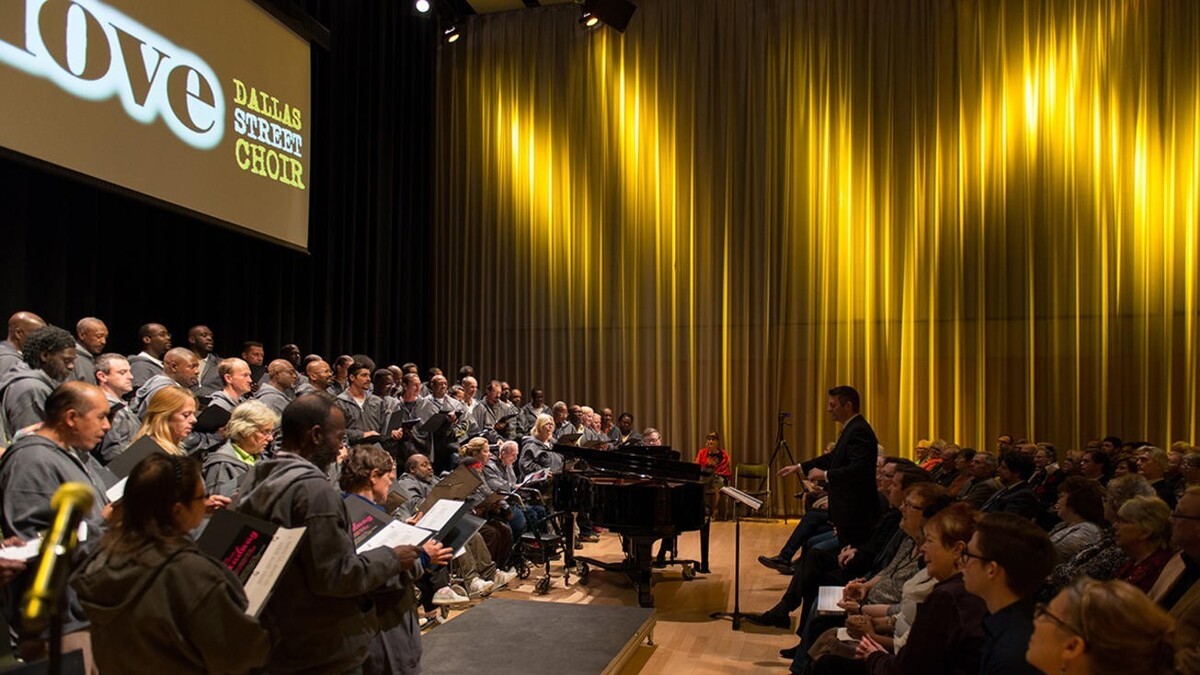 The Dallas Street Choir, whose members are homeless, performs at the Winspear Opera House. The choir has embarked on an East Coast tour that includes a stop at Carnegie Hall.

Three days before the Dallas Street Choir leaves for New York, its traveling members are assembled and listening intently to choir director Jonathan Palant. He makes an announcement about yet one more phase of preparation: haircuts at 12:45 for anybody who wants one.

When you're organizing singers who are homeless for a performance at Carnegie Hall, arrangements have to be particularly thorough. However, a glance around the room at the Dallas Stew Pot — the city's homeless shelter and the choir's rehearsal spot — quickly shows that no one in the Street Choir appears offended. The haircuts are one more piece of evidence that this performance is real, and that they're being taken seriously.

One Night Only: The Streets Meet The Opera House

The Dallas Street Choir is a group composed of the city's homeless. Though its lineup has varied over the years, over time it's become a more concrete unit, and 25 of its most dedicated singers — including some with mental illness and addiction issues — have been picked to tour the East Coast.

Its stop Wednesday night in New York is historic: Never before in its 126-year history has Carnegie Hall hosted a musical ensemble solely comprising performers who are homeless. And what's more: Tickets have been donated so hundreds of New York City's homeless, from all five boroughs, can attend.

The sound the Street Choir will bring to the hallowed venue is, Palant freely admits, "scrappy."

"We acknowledge that," the veteran choral director says. "But it's unbridled, passionate — filled with love and joy and uniqueness."

The Street Choir's sound is understandably rawer, Palant points out, because "you're teaching the most basic musicianship skills — loud, soft, slow, fast, long, short. You're teaching folks who have a hard time staying awake because they spent the previous night on a heating grate outside."

Deborah Scott is one of the singers who made the travel team. "There are so many professional singers that would kill to be on the stage at Carnegie Hall," she says. "Through the choir, I'm going places that I never would've imagined myself being a year or two years ago. Never. I'm so grateful."

For decades, Scott was a customer service representative for the transit authority in Houston. But after a downsizing, followed by divorce and a move to Dallas that turned out to be a mistake, Scott found herself homeless.

Though she's recently found a room with the help of professionals at the Dallas Stew Pot, she still returns for the Street Choir. Becoming homeless was a blow to Scott's self-esteem, but singing in the Street Choir has given her a reason to get up in the morning.

"We are coming together over our love of singing and our desire to show that there's more to being down and out and homeless than just sitting on the street corners all day," she says.

Scott and the rest of the Street Choir will be joined at Carnegie Hall by some of the brightest stars from Broadway and the opera. These include composer Jake Heggie, who has has arranged music and will accompany the choir on piano. Mezzo-soprano Frederica von Stade will join the singers again, after she performed with them in Dallas two years ago.

Heggie, whose opera Great Scott was next door at the Winspear Opera House, was in attendance that night in Dallas. "[My cast and I] were in the back row listening to this group of people who don't have a voice or face and we were all weeping," he remembers.

The Street Choir's performance reminded the celebrated composer of something he'd started to lose track of in New York City: why he started doing this in the first place.

In the audio, as in an earlier Web version of this story, the opera by composer Jake Heggie that was being performed at the Winspear Opera House is reported to have been Moby Dick. In fact, it was Heggie's opera Great Scott.