Accessibility links
2 Families Cruise Toward Catastrophe In 'Do Not Become Alarmed' Maile Meloy's novel centers on two families whose children go missing during an international vacation. Maureen Corrigan read it in two nights and says it's a "very smart work of literary fiction." 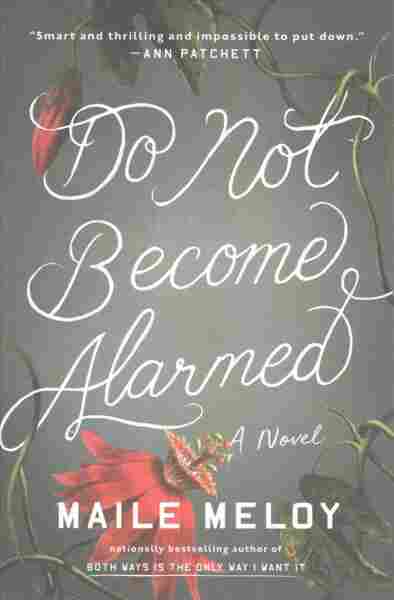 Do Not Become Alarmed

The title of Maile Meloy's new novel is misleading: Do Not Become Alarmed sounds like a suspense story. Granted, I did read it in two nights; but, while I'm a unapologetic fan of thrillers, Meloy's novel is something else, something trickier to characterize. I'd call it a very smart work of literary fiction that exposes how very thin the layer of good luck is that keeps most of us from falling into the abyss.

Meloy begins her book with an epigraph from Teddy Roosevelt that warns: "Americans learn only from catastrophe, and not from experience." The two American families at the center of this story think they're setting off for a cruise down the California coast to Central America, but, instead, they're in for a catastrophic learning experience.

Nora and Raymond are couple number one: she's white, he's black and a recognizable Hollywood actor. They have a little girl and an 11-year-old boy who seems to have a mild case of Asperger's Syndrome. Nora's cousin Liv and her husband Benjamin, both white, are the other couple, and they have a boy and a girl of similar ages.

Even before the massive ship lumbers out into international waters, we readers sense this won't be a lighthearted Disney family cruise. Flipping on the TV in his cabin, a bored Benjamin comes upon the ship's own channel, where employees of the cruise line are being interviewed and are surprisingly blunt about the grueling hours they put in every day:

"Why would they put this on the TV?" [Liv, asks when she comes into the room.]

"I don't know!" [Benjamin jokes.] Couldn't they find one cheerful kid who wants to see the world? Or that Ukrainian girl who's just happy not to be in Crimea?"

Meloy is intent on contrasting the "below decks" workers' first-hand knowledge of deprivation and danger with her privileged characters' relative sense of security.

The weaknesses inherent in insularity become more evident once the ship reaches Central America. The two husbands accept an invitation to play golf on shore, while the moms and kids sign up for a zip-line tour of a rain forest canopy. That plan is derailed, however, when their tourist van is hit by a car.

To pass the sweltering hours before help arrives, their guide suggests that the group trek to a nearby beach and swim. "You promise there's nothing dangerous in that water?" Liv asks the guide, who naturally reassures her.

But it's the water itself that's dangerous. As the moms doze in the sand, the tide shifts and the kids playing with inner tubes are gently carried off, up the river that feeds into the lagoon. When the moms wake up to an empty beach, their kids are already lost, deep in the jungle.

That's just the opening crisis of Do Not Become Alarmed, a title that's, of course, sarcastic. There is, indeed, much to be alarmed at in this world — especially in terms of the horrors that children everywhere are subjected to — and Meloy, without being heavy handed or voyeuristic, doesn't shy away from depicting those grim truths.

A parallel storyline chronicles the parents' agony as they wait for news of their missing kids. Stress fractures in the marriages widen, as the husbands and wives find all sorts of inventive ways to blame each other and themselves.

In the grip of fear, Nora, the white mom of the biracial kids, worries that she taught her kids to be too polite, too obedient, in order to fit into, for instance, the community of their white private school.

Nora tells her mother-in-law that she's afraid her two kids "are huddled somewhere being good, like I taught them ... [a]nd they won't take a chance. ... and so they won't be rescued. ... And it will be all my fault."

That's an unexpected moment in a novel that's filled with them. Meloy is such a deft writer that she keeps the adventure plot whizzing along even as she deepens our sense of the characters and the unfamiliar culture they have to navigate. You may (mistakenly) think that you don't want to enter the nightmare world of this novel, but Meloy makes you realize what a luxury it is to have that choice.

Read an excerpt of Do Not Become Alarmed