Accessibility links
Trump Answers Call From Hard-Liners On Cuba President Trump is imposing new restrictions on travel and trade with Cuba. Individual travelers may have to join tour groups. And business ties with the Cuban military will be sharply curtailed. 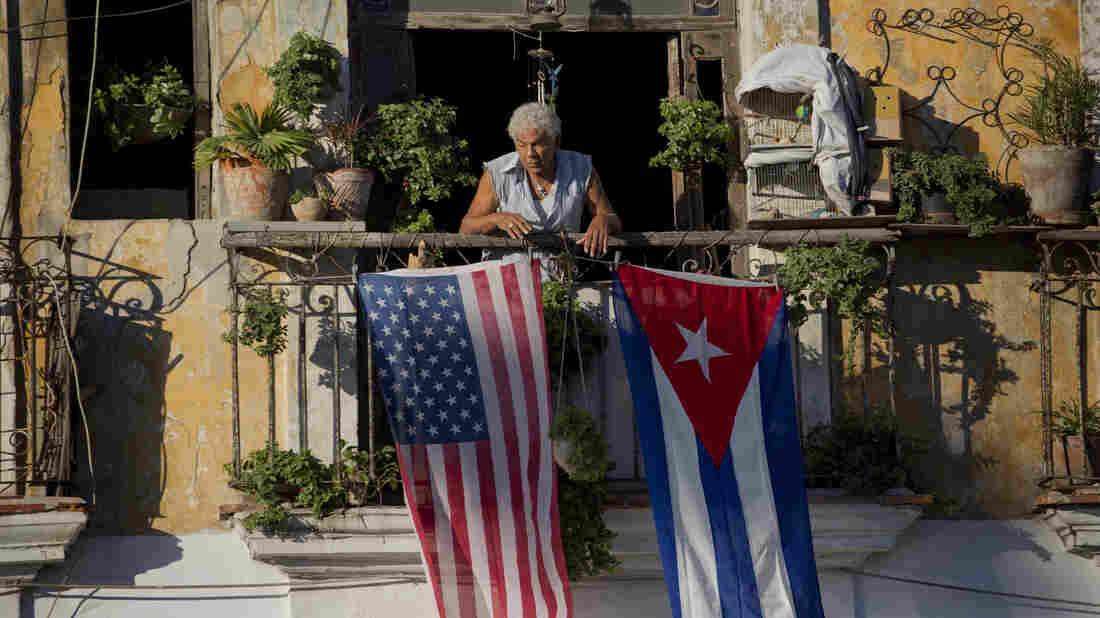 Javier Yanez decorated with U.S. and Cuban flags in Old Havana, Cuba, in 2014. President Trump is expected to reverse some of the easing in U.S.-Cuba relations that President Barack Obama initiated. Ramon Espinosa/AP hide caption 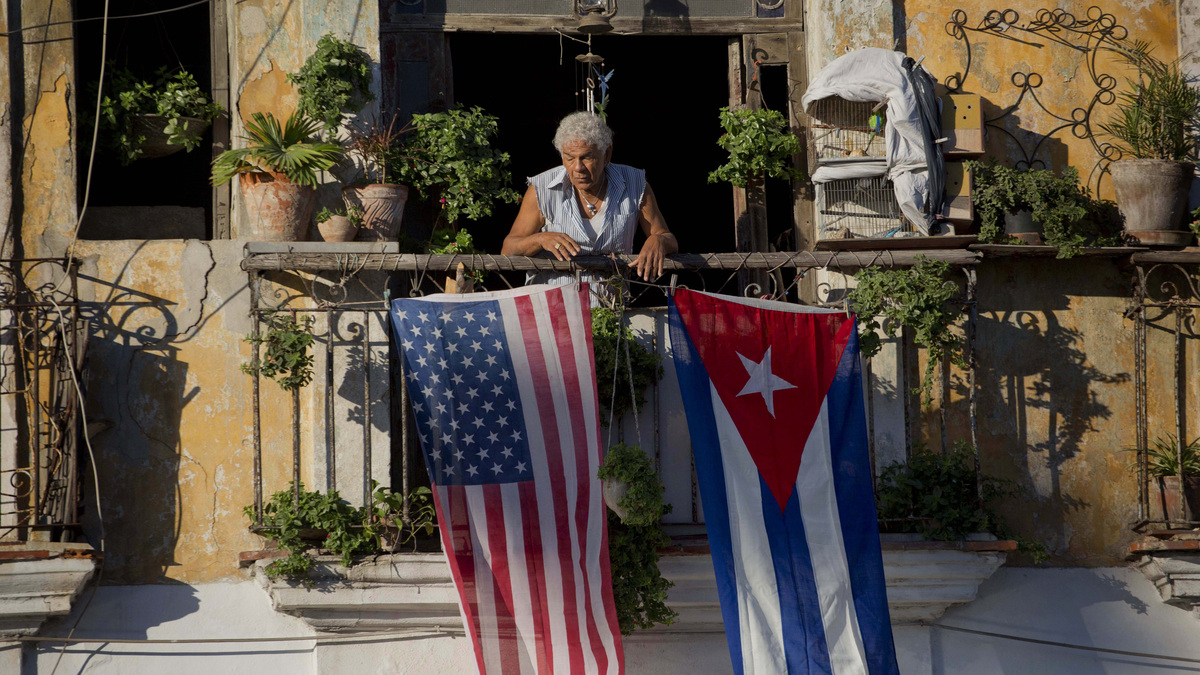 Javier Yanez decorated with U.S. and Cuban flags in Old Havana, Cuba, in 2014. President Trump is expected to reverse some of the easing in U.S.-Cuba relations that President Barack Obama initiated.

President Trump has announced new restrictions on travel and trade with Cuba, backtracking on the policy of greater engagement with the island pushed by his predecessor, Barack Obama.

"Effective immediately, I am canceling the last administration's completely one-sided deal with Cuba," Trump told a cheering crowd of Cuban exiles in Miami's Little Havana neighborhood. "Easing of restrictions on travel and trade does not help the Cuban people. They only enrich the Cuban regime."

Trump will not go so far as to sever diplomatic ties with Havana or shutter the U.S. Embassy, which reopened there in 2015. But he will impose new limits on commercial transactions that involve the Cuban military. And Americans will no longer be allowed to travel to the island on their own for "people-to-people" purposes, once the new rules are in place.

The new restrictions were championed by Sen. Marco Rubio and Rep. Mario Diaz-Balart, two Cuban-American lawmakers from South Florida. Both men were on hand when Trump announced the changes in a sweltering theater named for a veteran of the failed, 1961 Bay of Pigs invasion. Rubio accompanied the president on Air Force One.

"America is prepared to outstretch its hand and work with the people of Cuba. But we will not, we will not empower their oppressors," Rubio said.

The policy change fulfills a promise Trump made to Florida's Cuban exile community last fall. Although Trump lost the Miami area to Hillary Clinton by double digits, he credits support from Cuban-Americans with helping him eke out a narrow victory statewide.

Havana Now Has A Luxury Mall. But Who Can Afford To Shop There?

"You went out and you voted, and here I am," Trump said Friday.

The policy changes won't take effect immediately, so Americans with plans to travel to Cuba in the near future won't be affected. But as soon as new regulations are drafted by the Treasury and Commerce departments, they're likely to pour cold water on the burgeoning Cuban travel business.

Cuban diplomat Josefina Vidal told the Miami Herald that more than 600,000 Americans visited the island last year, a 34 percent jump from 2014. The trips were made easier by the resumption of scheduled commercial air service from the U.S. for the first time in decades.

By law, travel to the island from the U.S. is still generally limited to 12 authorized categories such as educational activity, humanitarian projects and support for the Cuban people. The Obama administration eased those restrictions by allowing visitors to merely declare their reason for going, with few questions asked. The new Trump policy will require greater documentation. And travelers seeking "people-to-people" contact will have to sign up with an organized tour group.

"They know exactly what they're doing and what they're trying to do is stop travel to Cuba," said James Williams, president of a lobbying group that advocates for greater engagement with the island.

The new policy will also prohibit most commercial transactions that involve the Cuban military.

"We will very strongly restrict American dollars flowing to the military, security, and intelligence services that are the core of the Castro regime," Trump said.

That could have far-reaching effects since the military touches almost every corner of the Cuban economy. Many of the big hotels in Havana, for example, would be off-limits to American visitors.

"There are about 50 or 60 Wi-Fi hot spots in Havana. And you can tell where they are because there are dozens of people crowded around there," said Carlos Gutierrez, a Cuban-American who served as commerce secretary in the George W. Bush administration. "That has also happened as a result of normalization and I just can't imagine backtracking on something like that."

Polls suggest most Americans support the liberalized policy toward Cuba pushed by the Obama administration. Even among Cuban-Americans in South Florida, nearly two-thirds want to lift the U.S. embargo. Trump's policy, however, is being steered by a handful of politicians — including Rubio and Diaz-Balart — who insist the best way to bring about reform on the island is renewed economic isolation.

"This is limited to perhaps as small as three voices in the U.S. Congress, certainly less than 10, suggesting a course of action that is not only not the best interests of the United States of America, but it's not the popular view," said Rep. Tom Emmer, R-Minn., one of seven House members who wrote to the president to oppose the changes.

The White House says it's willing to negotiate more favorable terms with Cuba, but only if the Castro regime allows free and fair elections and releases political prisoners.

Human rights advocates acknowledge that Cuba has made little progress in that area, despite the Obama overtures. But they argue, economic isolation didn't topple the Castro government either, despite more than a half-century of trying.

"We've had this new policy for basically two years. And we've already seen significant changes," said Williams. "Is it as much as we'd like to see? Absolutely not. And the Cuban government should do more. But the idea of returning to something that we know does not work doesn't make any sense."

"I think the evidence is modest but real that engagement contributes to a climate in which human rights can improve," said Geoff Thale of the Washington Office on Latin America.

Trump plans to preserve some of the policy changes made by Obama. Cubans who make their way to the U.S. without authorization will still be returned to the island, just like unauthorized visitors from other countries. And Americans who visit Cuba will still be allowed to bring rum and cigars home with them.