Accessibility links
Heartbeat Music: Parents Remember Their Son Through His Song Of Life Nate Kramer was a tall, quiet collegiate swimmer when he was diagnosed with leukemia. He died four years later. But during treatment he met a therapist, and together they played and recorded music. 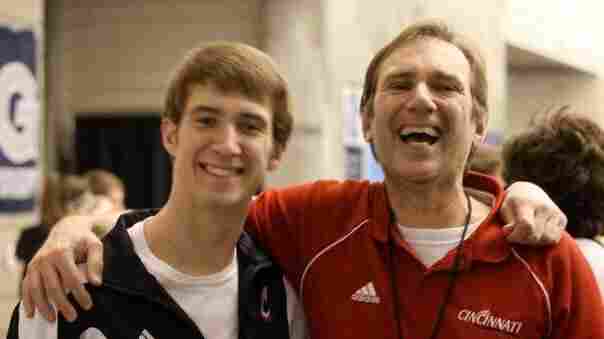 Nate Kramer was a tall, quiet college swimmer when he was diagnosed with leukemia. His father, Vince, says it was a difficult four years of chemotherapy, infections and operations. Courtesy of Vince Kramer hide caption 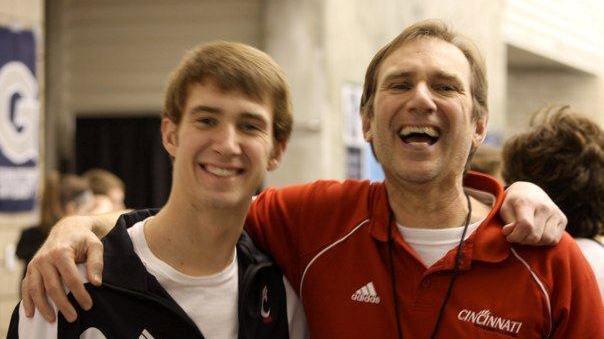 Nate Kramer was a tall, quiet college swimmer when he was diagnosed with leukemia. His father, Vince, says it was a difficult four years of chemotherapy, infections and operations.

Nate Kramer was a tall, quiet college swimmer when he was diagnosed with leukemia. His dad, Vince, says it was the beginning of four difficult years.

Nate battled through chemotherapy, a fungal infection of the sinuses, 30 operations, bone marrow transplants, a lung infection and the removal of his spleen. Vince says his son kept rallying back.

During these ups and downs, although his health was precarious, Nate started working with a music therapist from Cincinnati Children's Hospital named Brian Schreck.

"Brian would come over to the house," says Nate's mom, De Ann. "They would play music, they would record music. Brian was really teaching him to play his guitar."

Brian says Nate loved to play riffs by The Rolling Stones and Jimi Hendrix — but for the most part, Nate's parents didn't really know what Nate and Brian were recording.

As the years passed, Nate and Brian grew close. "I think Nate could talk to Brian about things that he didn't want to talk to us about because it would hurt us," De Ann says.

One day, Nate asked Brian about a project Brian had been working on. As part of his work as a music therapist, Brian had been recording the heartbeats of babies and children near the end of their lives, then layering the rhythmic pulses over melodies.

Brian asked Nate if he would like to record one, and Nate agreed. But Nate's father wasn't too keen on the idea of the heartbeat project. 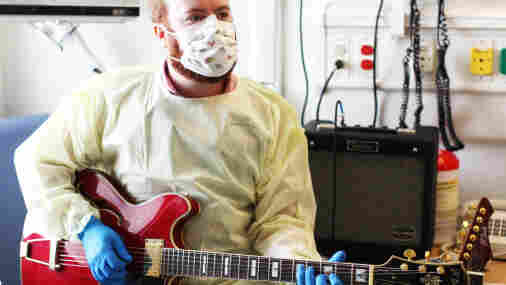 Music therapist Brian Schreck began working with Nate Kramer after he was diagnosed with leukemia. Together, they recorded a song of Nate's heartbeat layered over melodies. Courtesy of Brian Schreck hide caption

To Vince, it felt like giving up, and he wasn't ready for that — even a couple weeks later when Nate, then 26, was back in the hospital.

"He was doing very poorly, and I just actually asked ... 'Nate, do you still want to fight?' " Vince says. "And he said to me, 'Wanna fight.' That was the last words he said to me."

Nate couldn't talk after that. Five days later, his mom was up early with him.

"It was just the two of us, and I was laying basically on his chest and listening to him," De Ann says.

"[I] could still hear his heartbeat then; that afternoon he had passed."

After Nate died, Brian gave Vince and De Ann a couple CDs from Nate, but Nate's death was still too raw for them to press play. They sold their house with its painful memories, packed up their belongings and moved.

Just over a year later, Vince was at home. It happened to be Father's Day.

"I was rearranging my office, and I came across CDs that had a very unique — some sort of custom cover," Vince says.

When he plugged it into the computer, the first thing he heard was, "Happy Father's Day, old man. Love ya."

"It was Nate's voice," Vince says. "And I was like, 'What?' So then I listened to the next song, which was the heartbeat song."

Nate had made a CD for his mom, too.

"Hearing the heartbeat for me is very bittersweet because of the morning of the day that he passed," De Ann says. "But I would never give it up. How strong it sounds."

Vince says the CD will probably never leave his CD player. He has made about half a dozen spare copies of the CD.

"Nate had a very powerful, smooth, slow, rhythmic heartbeat," Vince says. "It's Nate. It's life. I cannot explain why it just sort of calms me down."