Accessibility links
Fact Check: Is Left-Wing Violence Rising? This week's shooting at a Republican baseball practice alarmed those who fear the left is becoming more radicalized. 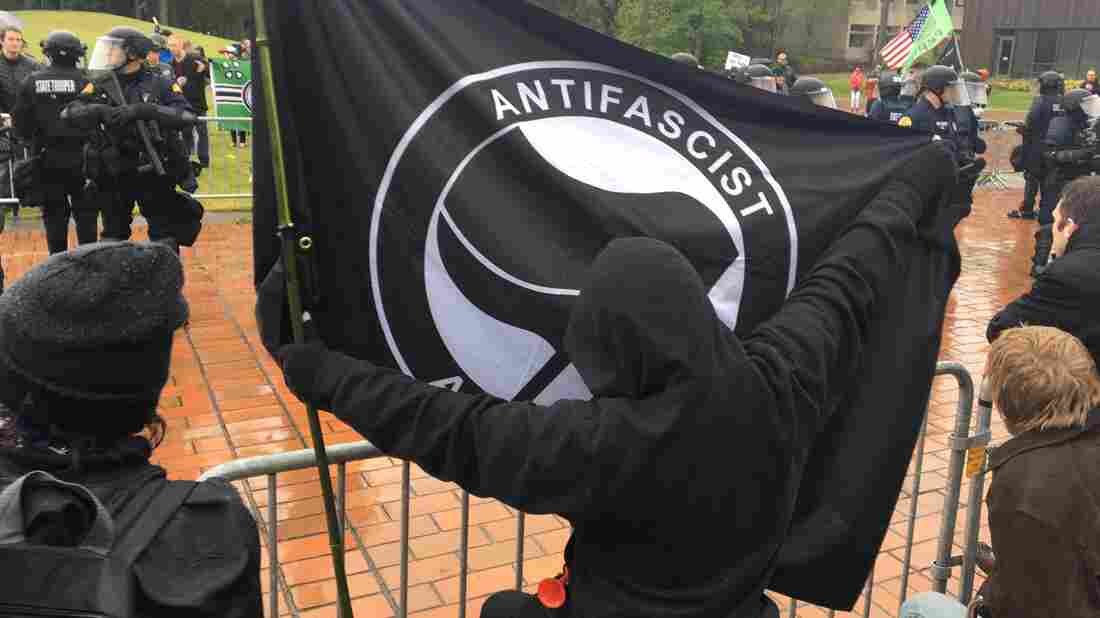 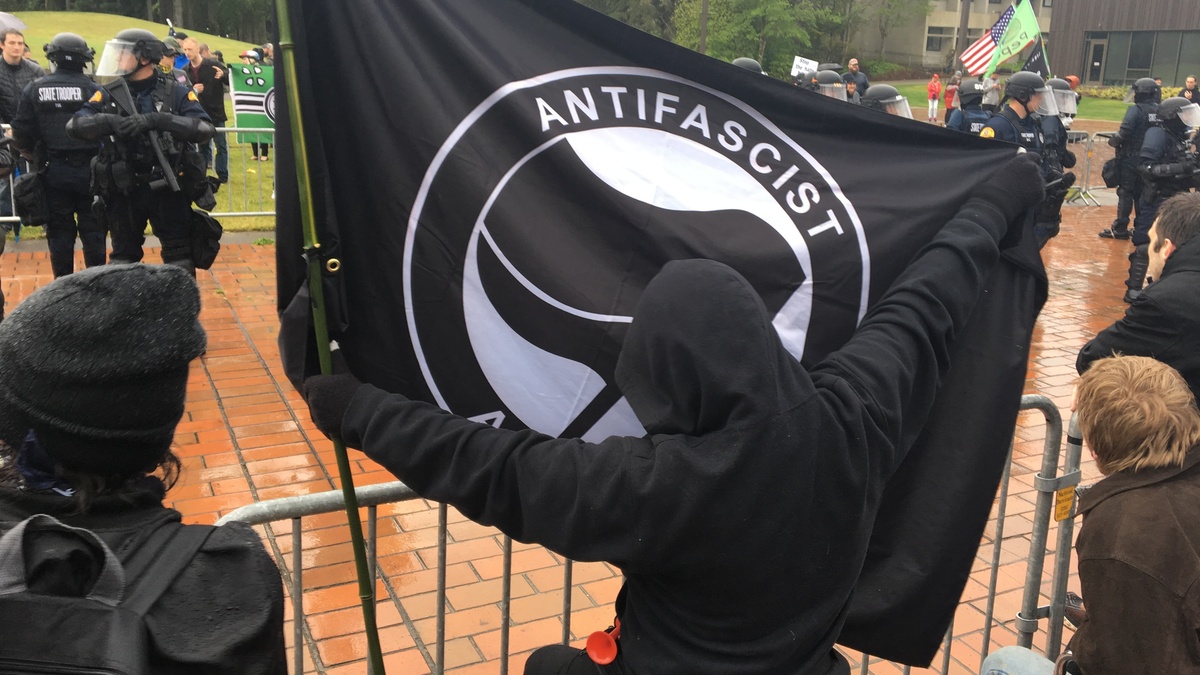 Right-wing protesters were met by a large number of masked, black-clad counterprotesters at The Evergreen State College Thursday night.

Some conservatives have seized on Wednesday's shooting of Republican Rep. Steve Scalise and three others as the latest example of what they see as rising political violence from the left. Fox News' Sean Hannity accused Democrats of "dehumanizing" Republicans, and the right-leaning Washington Times ran an editorial by a Tea Party activist that called leftist protests "the first skirmishes of the second American civil war."

But those who track extremism say that while there are a few far-left groups that raise red flags, their numbers remain small.

Much of the conservatives' anger has been aimed at "Antifa" — short for "anti-fascists." Antifa are loosely affiliated groups of mostly young people, mainly on the West Coast but spreading around the country.

They dress in black and wear masks when they confront right-wing groups; in the past few months there have been clashes or confrontations in Berkeley, Calif.; Portland, Ore.; and, just this week, on the campus of Evergreen State College, in Olympia, Wash. 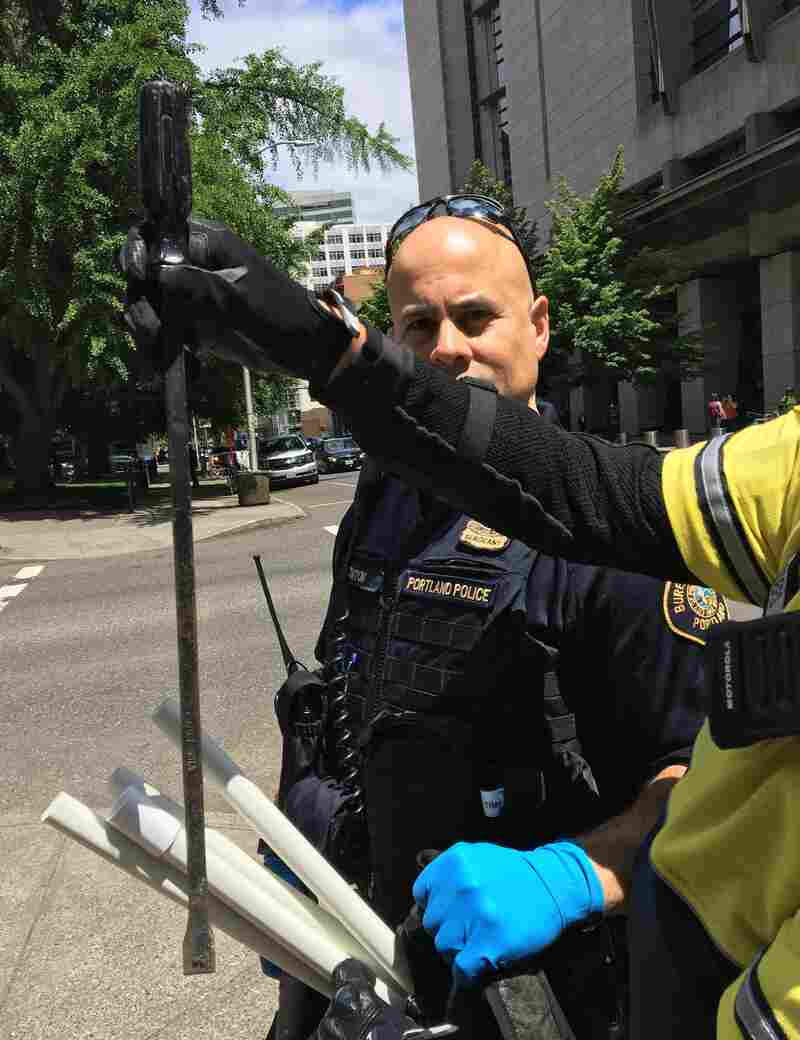 "The moment we got here, they started throwing rocks," says Joe Allen, one of the right-wing protesters who descended on the college Thursday to challenge what they see as its leftist ideology. They were met by a large number of the masked, black-clad counterprotesters. Allen says the Antifa have been harassing Trump supporters since Election Day.

"That night we went to downtown Portland to see what everything was like, and we got stuck on the bridge because [the Antifa were] stopping all traffic, hitting cars, jumping on cars, asking people, 'Who did you vote for?' "

A heavy presence of police in riot gear kept the confrontation at Evergreen State from escalating. The leader of the conservative protesters and the "Patriot Prayer" movement, Joey Gibson, was slightly injured — he said someone threw a can at his head. He later found his tires slashed. Witnesses say masked counterprotesters did it.

Antifa rarely talk to reporters and rarely give their names, at least not while wearing masks. But in online discussions they say the far-right activists are being disingenuous. They point to what they regard as the racism and white supremacist ideology of the other side. They say groups such as Gibson's only pretend to be interested in peaceful political protest and would attack minorities or leftists, given the chance.

"People are desperate," says one masked counterprotester, a student at Evergreen State who gave his name as Felix. "They see the government turning back to regressive Reaganomics and racist undertones and rhetoric, so once they start kicking 25 million people off health care, then you're going to start seeing riots."

The idea that some on the far left are openly condoning violence is a red flag for extremist group monitors.

"This is a dangerous game; people are going to die. No one's died yet, but it's just a matter of time," says J.J. McNabb, an expert on political extremism at George Washington University.

"These guys are odious, [but] attack them with words. Don't come in with sticks and nails in them," she says.

Antifa are not new. They're a latter-day version of the anarchists and "black bloc" groups who, over the years, have often challenged police and broken windows during May Day protests in Seattle and Portland. Their membership is hard to track, but it appears to be expanding beyond the West Coast. They are also embracing other leftist causes beyond just fighting white supremacists.

Still, their numbers are tiny in relation to the mainstream political left. And, say experts, it's misleading for right-wing groups to suggest that the Antifa are more violent than right-wing extremists.

"The far left is very active in the United States, but it hasn't been particularly violent for some time," says Mark Pitcavage, a senior research fellow at the Anti-Defamation League's Center on Extremism.

He says the numbers between the groups don't compare.

"In the past 10 years when you look at murders committed by domestic extremists in the United States of all types, right-wing extremists are responsible for about 74 percent of those murders," Pitcavage says.

You have to go back to the 1970s to find the last big cycle of far-left extremism in the U.S. Both Pitcavage and McNabb say we have been in a predominantly far-right extremist cycle since the 1990s — the abortion clinic bombings and Oklahoma City, for example. And, more recently, racially motivated attacks such as the one at a Sikh temple in Wisconsin, the mass shooting at a black church in Charleston, S.C., and last month's stabbings on a commuter train in Portland.

Still, Pitcavage says Wednesday's shooting attack on Republican members of Congress is a warning sign. He is especially concerned because the shooter apparently was not particularly extreme in his political ideas; his views were seemingly in the mainstream left.

"One act does not a trend make," Pitcavage wrote after the shooting attack. "But I am concerned that, in this highly polarized and divided society, more people who have stances that fall within the mainstream, on the left and right alike, may consider political violence an attractive option."