Accessibility links
'The Changeling' Is, Itself, A Changeling Of A Book Victor LaValle's story of a rare book dealer whose life is torn apart after his wife commits an act of violence and vanishes is by turns enchanting, horrifying, infuriating and heartbreaking.

'The Changeling' Is, Itself, A Changeling Of A Book

'The Changeling' Is, Itself, A Changeling Of A Book 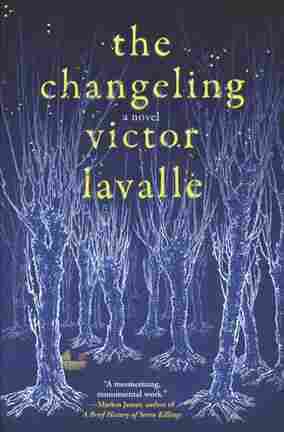 I keep wondering how I'd feel about The Changeling if I'd started by reading the flaps, and let someone else build the box into which to pour my reading experience.

As it was, my only clues about the kind of book it would be came from the title and Yuko Shimizu's intriguing cover art. I'm fluent in folklore. I know what changelings are. As I started reading, I began to think this would be a fantasy novel in the style of John Crowley's Little, Big, where everything is fairies but no one talks about the fairies and the fairies are long loping metaphors for generations' worth of relationships with enchantment.

As with Little, Big, I was frequently startled by The Changeling's piercingly beautiful insights into parenthood, childhood, adulthood, but uncertain about whether the growing dislike I felt for the protagonist was deliberate on LaValle's part or not. I was completely absorbed by his thorough character sketches, his moving reflections on race and growing up black in New York, his deep, specific focus on the minutiae of parenting an infant — but I was stunned that a book that could move me to tears by page 7 ("Parenthood is a story two people start telling together") could also ask me to like a man who doesn't take no for an answer, who cuts wishes from his wife's wrist.

But as it happens, this book is a changeling too, and accomplishes a deft, complex bait-and-switch almost halfway through.

Here is more or less what most synopses I've seen of The Changeling say: Apollo Kagwa is a rare book dealer and new father, in love with his wife, Emma, and their infant son Brian, named after the vanished father who haunts Apollo's dreams. But when Emma commits an unspeakable act of violence and disappears, Apollo's left grasping at the threads of his unravelled life, following them through a labyrinth of strange characters, mysterious islands and haunted forests, all occupying the same space as the five boroughs of New York City.

This is accurate — but the experience of reading the book is something else. The storytelling gets compressed and decompressed at various points like the air in a bellows, stoking the fire under the story, burning away its disguises and sending it shrieking up the chimney. That unspeakable act of violence feels like it happens in the middle of the book, not at the end of the first act (Chapter 30 of 102, in fact). And that first act has at least five distinct, sequential stories in it. Which is not to say that the book is slow — it's riveting — but trying to hold its shape in my head is like trying to look straight at the Pleiades.

There is so much in The Changeling I want to talk about without quite knowing how to start. I loved that this was a novel of black people in New York loving each other and enduring together. I couldn't read Apollo cradling his son without thinking of Moonlight's Barry Jenkins saying that he'd never seen a black man cradling a black child on film, or one black man cook for another on film. I loved seeing Apollo's relationship with his mother, his best friend Patrice, his sister-in-law, his wife's friends — and realizing that, in contrast to most books, people's ethnicities were mostly marked or remarked on if they were white.

By turns enchanting, infuriating, horrifying, and heartbreaking, 'The Changeling' is never less than completely engaging.

I do have quibbles with the book: some literary sleight-of-hand that felt like trickery more than pay-off, some plot questions unanswered, and a desire to have quite a lot more of Emma's perspective. The dislike I was feeling for Apollo shifted and vanished as the book showed its hand, but I kept imagining a shadow-book following my reading, the whole story from her point of view. That said, I loved what was there: a profound relationship with her sister, supportive co-workers, and a heartbreakingly perfect confrontation in the denouement kept the book balanced on the knife's edge of its themes.

By turns enchanting, infuriating, horrifying, and heartbreaking, The Changeling is never less than completely engaging. It plays with memory, fairy tale, and the stories we tell each other about ourselves; it walks around the walls we build of our stories — whether out of family memorabilia or photos on Facebook — and probes them for holes. It's a book that makes me want to seek people out to talk about it, to share together our own stories of reading it.