Accessibility links
Book Review: 'Arabia Felix: The Danish Expedition Of 1761-1767,' By Thorkild Hansen Of the scholars who set out on a 1761 quest to Yemen, only one came back alive. But don't let their looming doom distract from the drama in Thorkild Hansen's hybrid of history, fiction and travelogue.

In The Refrains Of 'Arabia Felix,' A Reminder: Often The End Is Just A Start

In The Refrains Of 'Arabia Felix,' A Reminder: Often The End Is Just A Start 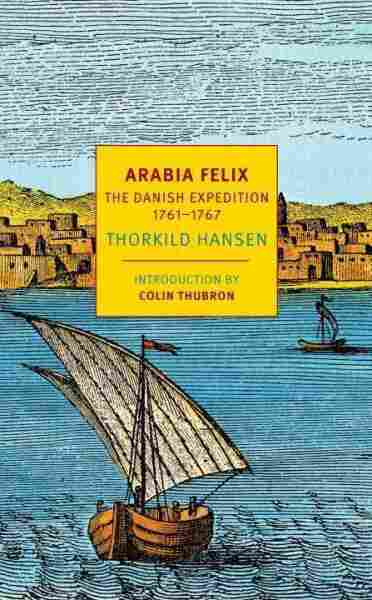 This trip is not going to end well.

That much is clear from the outset in Arabia Felix. The book — first published by Danish novelist Thorkild Hansen in 1962, later translated into English by James and Kathleen McFarlane, and now out in a new edition — flirts with the ambiguous boundaries between history, fiction and travelogue. But almost from the very beginning, it is unmistakably firm on one point: Just about every one of the bright young scholars who undertake the ambitious scientific expedition at the heart of the book is going to die.

Yet at the outset of the actual trip, in 1761, the Danish financiers behind it could scarcely have had higher hopes. This quest to uncover the empirical truths behind the Bible in Arabia Felix — "Happy Arabia," or Yemen, as it's known today — was to be King Frederick V's chance to make his own splash in the era of the Enlightenment. It was to be a testament to humankind's capacity to make sense of the worldly and holy at once, by gratifying "simultaneously two of the greatest obsessions of the age — the great interest in science, and the enthusiasm for foreign and particularly Oriental lands."

Trouble is, humankind — as it's wont to do sometimes — got in the way.

Out of the journals, illustrations and correspondence the unfortunate expeditioneers left behind, Hansen cobbles together a narrative as concerned with the men themselves as what they sent back — the scientific contributions that are also partly memorials to the disaster, when they even survived at all. Hansen's account dances in the ample daylight that separates these would-be scientific heroes: There's the cold, abrasively uncompromising botanist Forsskål, for instance; the scheming philologist von Haven, who might be another Iago if he weren't so damn lazy; and Niebuhr, the survivor and beating heart of the book, whose achievements did have some lasting value. Between these three men, and occasionally a few interlopers, Hansen triangulates a rich study of all the little human failings that erode our big ideas.

Though Hansen clearly feels affection for his subjects, he also feels no hesitation in slyly poking fun at their foibles.

At the same time, he keeps his sense of humor about it. Though Hansen clearly feels affection for his subjects, he also feels no hesitation in slyly poking fun at their foibles (and no one more so than von Haven). After an extended passage from a diary, he will chip in a line or two of snark or sarcasm — like a congenial wink from the director to the audience: Don't we both know better than those guys on stage?

For, despite the humor, it's tough at times to avoid the book's kinship to drama — namely, ancient tragedy. Like an Oedipus Rex, we know the way this one ends already; after all, it can be tough to call it a spoiler if the ending already lives in a Wikipedia entry. And Hansen only bolsters this connection, pointing out the sad refrains he hears in the young men's accounts, like their wistful observations of young women that seem to surface every time they depart a city.

"It almost seems as if the same girls are reappearing," Hansen writes, "entering upon the scene like a Greek chorus to mark an entr'acte."

Hansen has refrains of his own. With a favorite phrase — "we can picture" — he and his able translators repeatedly call upon us to conjure scene after scene from the dustbin of history: a rare balmy evening on the Atlantic, a troupe of girls dancing barefoot on the sand, a bitterly painful request from one member of the expedition to another. These moments lurk between the lines of diaries that might otherwise have made for dry reading; in Hansen's words, they take on the weight of the living.

It can be tough sometimes to root for these guys. Their failings can be deeply frustrating to watch, and their astute observations are matched only by their blithe obliviousness — to the plight of the slaves around them, for example, or the colonial blind spots most of them bear.

But then, that's part of the "double chord" that Hansen mentions at one point, that quietly plays throughout this book. There are, at all times, two separate strains playing at once: the hopes for the expedition and the foreknowledge of its fatal end, and the sympathies for each man and their ever-present frustrations, their discoveries and what they sacrificed to make them.

And always, the two sides to the impossible question driving both author and expeditioneers from the book's front cover onward: Why Arabia Felix? Why, after it has eluded so many and brought woe to so many more, is the land they're seeking called "happy" — and why, in the end, do they seek it?

A previous version of this review misstated Thorkild Hansen's nationality as Norwegian. In fact, the author was Danish.