Accessibility links
Book Review: 'Democracy In Chains,' By Nancy MacLean Nancy MacLean's book stretches back to 19th century Vice President — and ardent secessionist — John C. Calhoun to find the roots of modern libertarianism, which she calls a threat to democracy.

'Democracy In Chains' Traces The Rise Of American Libertarianism

'Democracy In Chains' Traces The Rise Of American Libertarianism 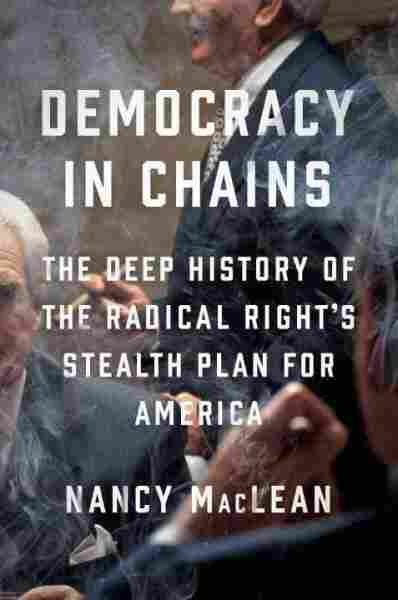 The Deep History of the Radical Right's Stealth Plan for America

Editor's note, Aug. 28: NPR is aware that questions were raised about Nancy MacLean's scholarship after the publication of Democracy in Chains. We've addressed the issue in an Ombudsman column, which you can find here.

Obscuring census data to give "conservative districts more than their fair share of representation." Preventing access to the vote. Decrying "socialized medicine." Trying to end Social Security using dishonest vocabulary like "strengthened." Lionizing Lenin. Attempting to institute voucher programs to "get out of the business of public education." Increasing corporatization of higher education. Harboring a desire, at heart, to change the Constitution itself.

This unsettling list could be 2017 Bingo. In fact, it's from half a century earlier, when economist James Buchanan — an early herald of libertarianism — began to cultivate a group of like-minded thinkers with the goal of changing government. This ideology eventually reached the billionaire Charles Koch; the rest is, well, 2017 Bingo.

This sixty-year campaign to make libertarianism mainstream and eventually take the government itself is at the heart of Democracy in Chains. It's grim going; this isn't the first time Nancy MacLean has investigated the dark side of the American conservative movement (she also wrote Behind the Mask of Chivalry: The Making of the Second Ku Klux Klan), but it's the one that feels like it was written with a clock ticking down.

It's grim going; this isn't the first time Nancy MacLean has investigated the dark side of the American conservative movement ... but it's the one that feels like it was written with a clock ticking down.

Still, it takes the time to meticulously trace how we got here from there. Charles and his brother David Koch have been pushing the libertarian agenda for more than 20 years. A generation before them, Buchanan founded a series of enclaves to study ways to make government bend. Before that, critic and historian Donald Davidson coined the term "Leviathan" in the 1930s for the federal government, and blamed northeasterners for "pushing workers' rights and federal regulations. Such ideas could never arise from American soil, Davidson insisted. They were 'alien' European imports brought by baleful characters." And going back another century, the book locates the movement's center in the fundamentalism of Vice President John C. Calhoun, for whom the ideas of capital and self-worth were inextricably intertwined. (Spoilers: It was about slavery.)

Buchanan headed a group of radical thinkers (he told his allies "conspiratorial secrecy is at all times essential"), who worked to centralize power in states like Virginia. They eschewed empirical research. They termed taxes "slavery." They tried repeatedly to strike down progressive action — school integration, Social Security — claiming it wasn't economically sound. And they had the patience and the money to weather failures in their quest to win.

As MacLean lays out in their own words, these men developed a strategy of misinformation and lying about outcomes until they had enough power that the public couldn't retaliate against policies libertarians knew were destructive. (Look no further than Flint, MacLean says, where the Koch-funded Mackinac Center was behind policies that led to the water crisis.) And it's painstakingly laid out. This is a book written for the skeptic; MacLean's dedicated to connecting the dots.

We are, 'Democracy in Chains' is clear, at a precipice.

She gives full due to the men's intellectual rigor; Buchanan won the Nobel for economics, and it's hard to deny that he and the Koch brothers have had some success. (Alongside players like Dick Armey and Tyler Cowen, there are cameos from Newt Gingrich, John Kasich, Mitt Romney, and Antonin Scalia.) But this isn't a biography. Besides occasional asides, MacLean's much more concerned with ideology and policy. By the time we reach Buchanan's role in the rise of Chilean strongman Augusto Pinochet (which backfired so badly on the people of Chile that Buchanan remained silent about it for the rest of his life), that's all you need to know about who Buchanan was.

If you're worried about what all this means for America's future, you should be. The clear and present danger is hard to ignore. When nearly every radical belief the Buchanan school ever floated is held by a member of the current administration, it's bad news.

But it's worth noting that the primary practice outlined in this book is the leveraging of money to protect money — and the counter-practice is the vocal and sustained will of the people. We are, Democracy in Chains is clear, at a precipice. At the moment, the first practice is winning. If you don't like it, now's the time to try the second. And if someone you know isn't convinced, you have just the book to hand them.