Accessibility links
Bill Cosby Sexual Assault Case: What Does Mistrial Mean In Court Of Public Opinion? On this Father's Day, NPR's TV critic Eric Deggans analyzes the impact of the mistrial in the sexual assault case against superstar comic and philanthropist, Bill Cosby — once known as America's Dad. 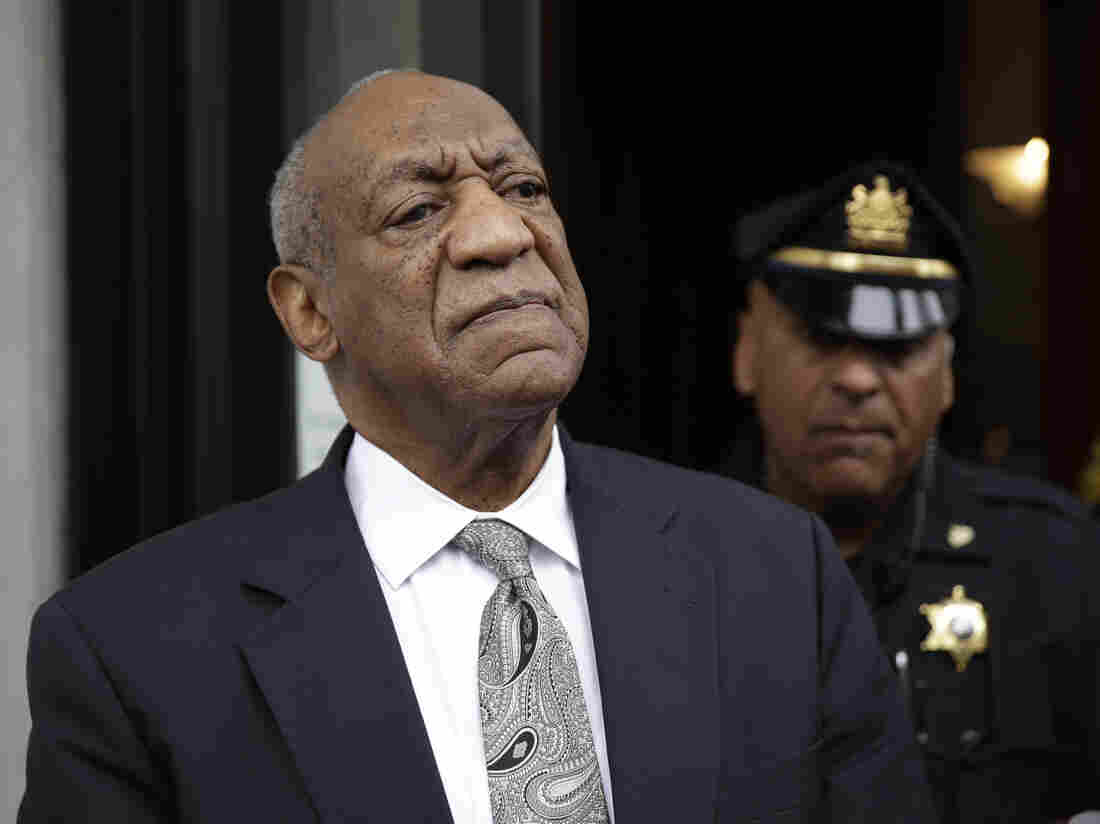 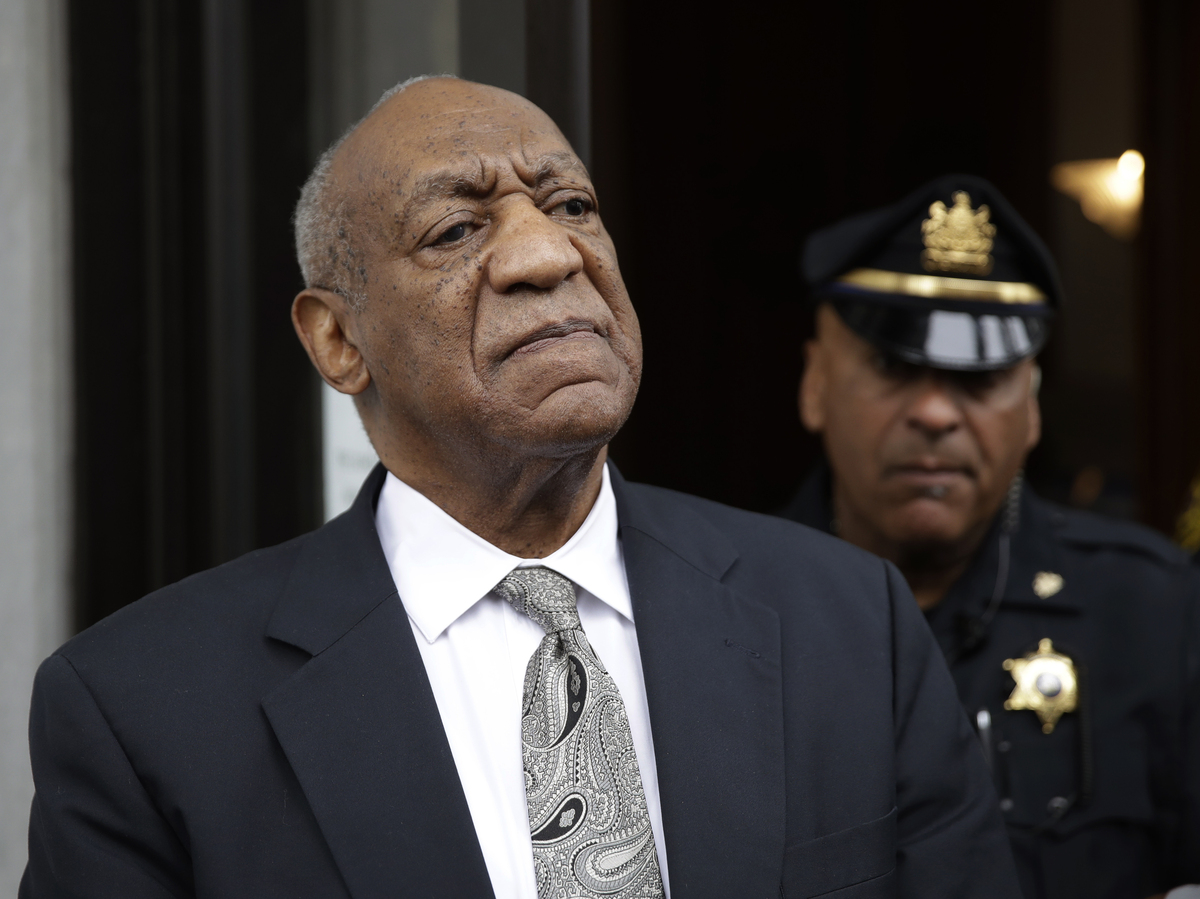 Bill Cosby exits the Montgomery County Courthouse after a mistrial was declared in his sexual assault trial in Norristown, Pa., Saturday.

It's a depressing question to ask on a Father's Day weekend: What does it mean that a superstar comic and philanthropist once "America's Dad" just saw his prosecution on sexual assault charges end in a mistrial?

The trial against Bill Cosby ended Saturday, when a deadlocked jury was unable to reach a verdict on three counts of aggravated indecent assault after several days of deliberations. Until and unless the jurors speak, we won't know if just one or two of them declined to convict or if there was more widespread disagreement.

[T]he verdict shows, once again, how difficult it is to convict a celebrity of serious criminal charges, especially in a case that boils down to taking one non-famous person's word over the celebrity's account.

Prosecutors have already said they will retry Cosby and people on every side of the issue have used the outcome to argue their cause — from advocates for rape victims concerned that other victims won't be believed to those, including Cosby's wife Camille, who say the jurors resisting conviction stopped an unfair process out to ruin a successful man.

I think the verdict shows, once again, how difficult it is to convict a celebrity of serious criminal charges, especially in a case that boils down to taking one non-famous person's word over the celebrity's account.

But it also reveals something else: How the court of public opinion can overlook scandal in one pop culture moment, only to deliver a very different verdict in another, later, time. And Cosby isn't the only powerful man to recently find his legacy ground into the dust over a similar dynamic.

Cosby's defense against Andrea Constand's allegation that he drugged and raped her in 2004 was that they had consensual sex. His deposition testimony in her civil suit revealed the man who has a bestselling book about fatherhood had procured Quaaludes for the purpose of having sex with women who were not his wife.

Given that he has been married to Camille Cosby for 53 years, he seemed to be admitting an awful truth to defend himself against even worse accusations.

These charges were first reported in the press many years ago; Constand filed a lawsuit against Cosby in 2005 when prosecutors at the time declined to file charges. Her lawyers lined up 13 other women who were ready to testify on similar allegations of being drugged and sexually assaulted by Cosby. Some of them talked to the press, even after Constand settled her lawsuit.

But the public's reaction back then was much different. It was as if we all decided to undergo a massive case of cultural amnesia at once, shrugging off the case with little public outcry. As a story on the website Gawker put it a few years ago, "Basically, nobody wanted to live in a world where Bill Cosby was a sexual predator. It was too much to handle."

And the world seemed to move on — until a joke by comic Hannibal Burress calling Cosby a rapist became a viral video in 2014, inspiring one of his accusers to write an op-ed column for the Washington Post, which brought an avalanche of new allegations.

When those allegations against Cosby were pulled back into the light nearly 10 years later, the public had a much different reaction. Media outlets scrambled to speak to women who alleged he had abused them; 35 of them posed for the cover of New York magazine. A sitcom deal with NBC vanished, and TV outlets pulled reruns of The Cosby Show.

We had reached a moment where those who allege sexual assault are believed more readily, particularly in the court of public opinion. Women seemed less inclined to accept a world where they have to tolerate harassment and worse from bosses and power brokers. And social media gave a voice to people who might have been overlooked before.

Doubt that notion? Then consider the recent fate of Fox News Channel founder Roger Ailes and former Fox News star Bill O'Reilly. Both men saw allegations of sexual harassment and lawsuit settlements rise from the past and smash their current careers. Ailes, who died in May, was ousted from the cable channel built in his image; O'Reilly followed, after the New York Times reported on settlements with five women totaling about $13 million.

And even though Donald Trump was elected president after audio surfaced of him seeming to admit to sexually harassing women, it was perhaps the biggest speedbump in his campaign – the only scandal that looked like it might actually reduce his popularity with his base.

Cosby has felt the sting of changed attitudes in another way; how people view his criticism of poor black people as somehow being enablers of their own problems with poverty and oppression. The comic's words advising young people to pull up their pants and stop committing petty crimes as an antidote to persistent inequality reminded me of my parents' generation and their approach to survival in an often racist world.

I don't think they ever expected white America could be fair enough to elect a black man like Barack Obama president. So the way to survive is to keep your nose clean and never give the system an excuse to come after you. That perspective was summed up in the title of Cosby's 2007 book, Come On, People: On the Path from Victims to Victors.

But there is less patience now for that rhetoric, derided as "respectability politics." As yet another police officer was acquitted Friday in the questionable shooting of a young black man, Philando Castile — sparking hundreds of people to protest in Minnesota — it seems that keeping your nose clean isn't enough.

But it's tough to imagine another major corporation lining up to work with Cosby again. His career is likely over, with decades of philanthropy and role modeling washed away by the star's own admission that he cheated on his wife many, many times, and allegations from dozens of women that he did far worse.

For those convinced of his guilt in Constand's case, that's not likely to feel like justice. But in a world where money, power and celebrity still buy exemption from quite a lot of rules, a guilty verdict in the court of public opinion may be the best outcome possible.

At least, until a little more time passes.