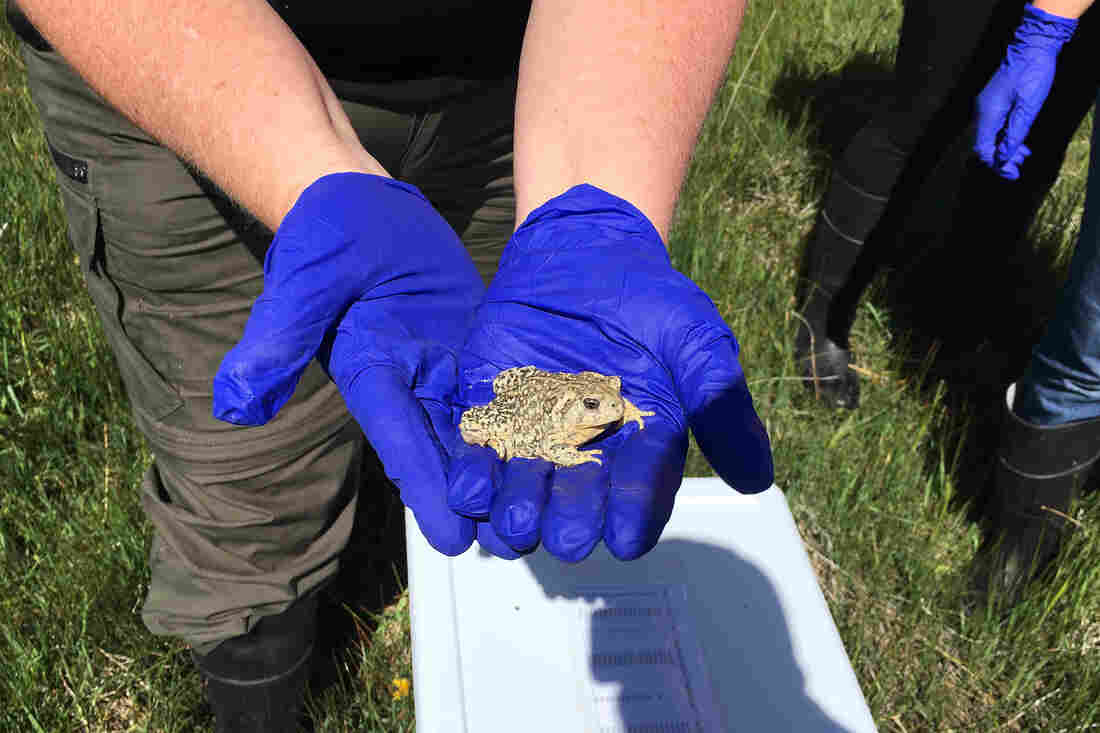 The Wyoming toad population in 1985 totaled 16. Today, there are 1,500 and it remains as one of 12 endangered species in the state. Cooper McKim/Wyoming Public Radio hide caption 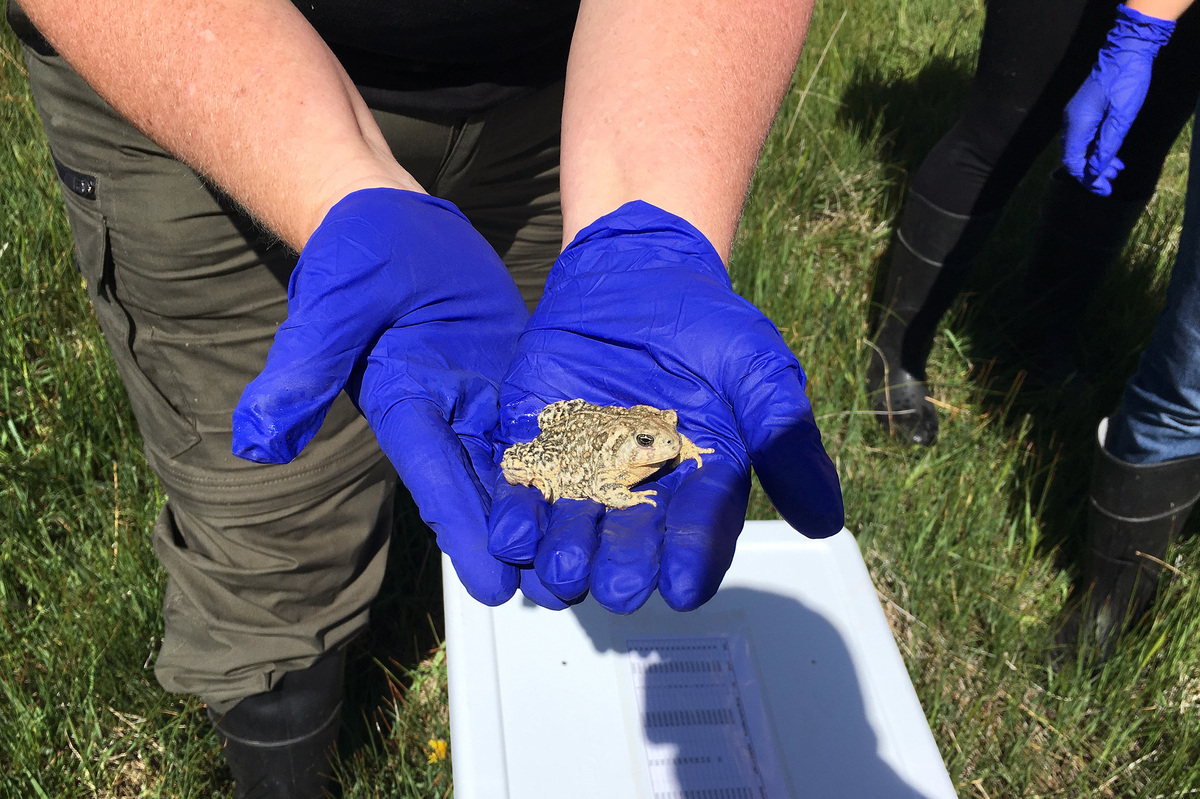 The Wyoming toad population in 1985 totaled 16. Today, there are 1,500 and it remains as one of 12 endangered species in the state.

The Endangered Species Act is facing a growing number of calls for significant changes. Momentum in Congress and in western states is building to give states more of a say when making changes to the landmark regulation that protects about 1,600 animal and plant species, and their habitats.

Back in 1985, there were only 16 of these palm-sized amphibians left at the Mortenson Lake National Wildlife Refuge in Laramie, Wyo.

Today, thanks to a 30-year collaboration between the state, federal agencies, landowners, non-profits and the University of Wyoming, there are about 1,500 Wyoming toads.

Sharon Taylor, who did her Ph.D. on the endangered toad's decline, arrived at the refuge with her two daughters earlier this month to help reintroduce about 250 toads back into the wild with a group led by Dough Keinath, the recovery coordinator with the U.S. Fish and Wildlife Service. This was one of five sites around Laramie where scientists released a total of 853 toads that came from a captive breeding site in Saratoga, Wyo.

Down at the lake shore, Taylor knelt next to her two daughters as her 11-year old daughter Christina released one of the brown, warty toads into the lake. Without stopping, the toad raced straight toward the water's center.

"Look at him swimming!" Taylor said to her daughter. "You've now released an endangered species."

As to when the Wyoming toad – one of the state's 12 endangered species – will be taken off the list, Keinath says it will take a long time.

But often, it is a political question. The Endangered Species Act is credited with keeping 99 percent of listed species from crossing over into extinction. Still, critics contend it's ineffective, burdening local wildlife managers with excessive federal oversight and leading to long-running legal battles to get species off the list.

One solution say critics: Give states more power over their endangered species. Chief Game Warden Brian Nesvik, of Wyoming's Game and Fish Department, says the state's work with the grizzly bear is one example.

"By all biological and scientific measures, grizzly bears have been recovered in Wyoming since 2003. And to this day, after being delisted once and relisted again, they still remain under federal protections ... the goal is not perpetual federal management," he says.

Congress is stepping up its own efforts, too. Since January, 28 pieces of legislation were introduced to change the act.

Sen. John Barrasso, R-Wyo., who's also a doctor, says only three of every 100 species are healthy enough to be de-listed.

"As a doctor, I will tell you if for every 100 people I put in the hospital only three recovered enough to come out, I would lose my medical license!" he says.

Barrasso has held two Senate sessions to discuss "modernizing" the act, but that's a term the conservation community finds troubling. 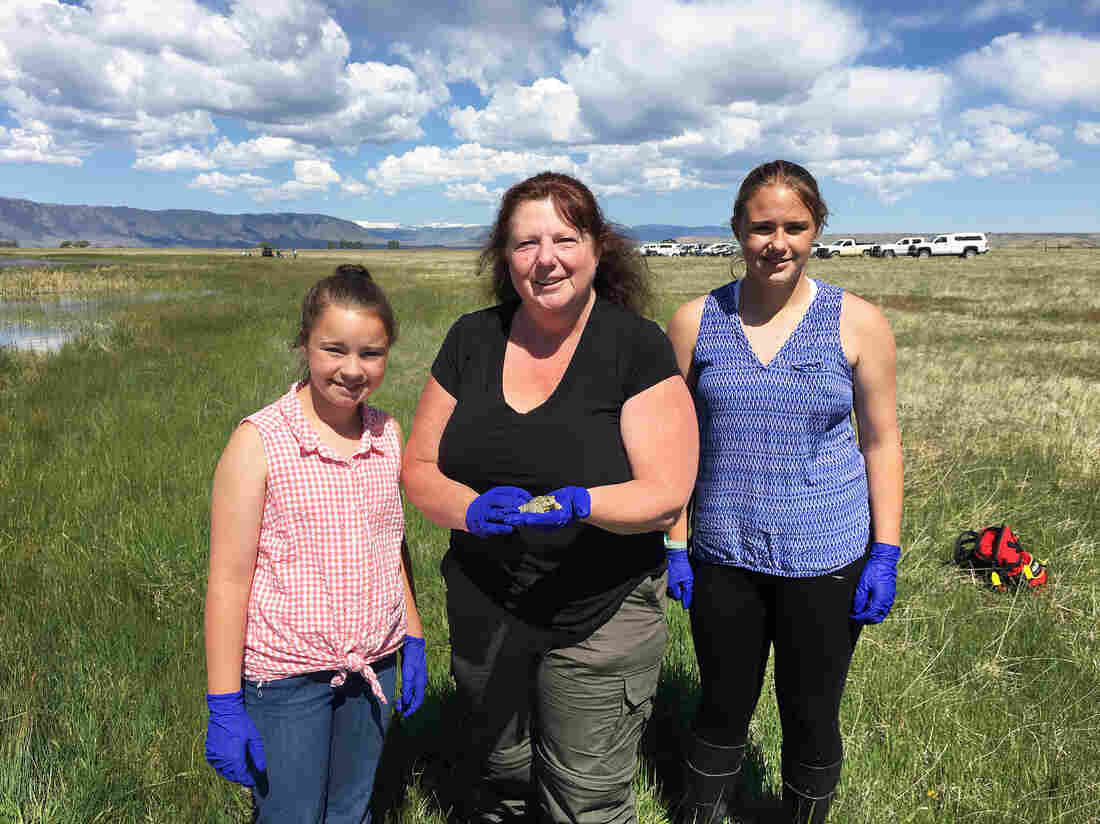 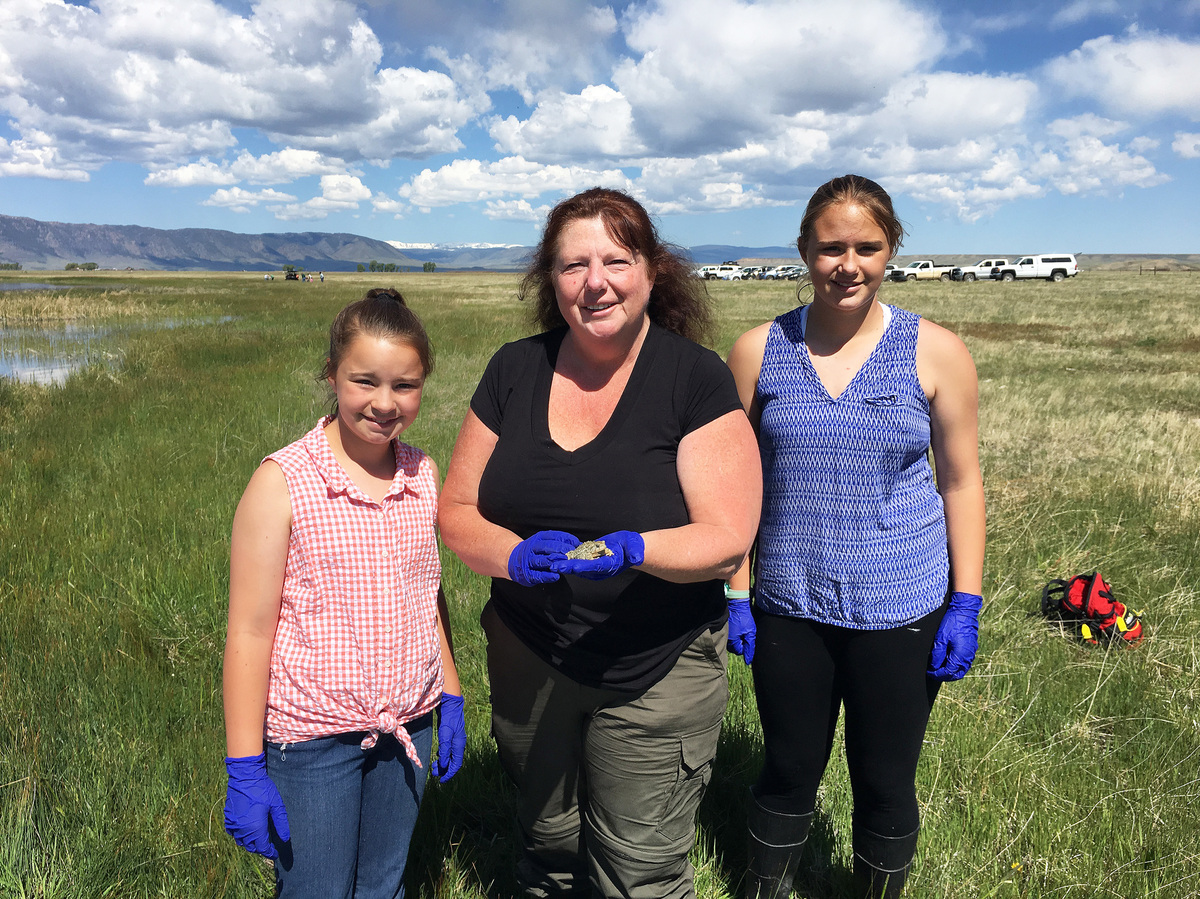 Sharon Taylor, with her daughters Christina (left) and Katelyn (right), were part of a group that reintroduced 853 Wyoming toads into the wild at Mortenson Lake National Wildlife Refuge in Laramie, Wyo.

"I think these calls are entirely disingenuous. Modernize when it comes from the likes of Matt Mead ... is a euphemism for: gut protections for endangered species," says Noah Greenwald, the endangered species director at the Center for Biological Diversity.

Greenwald says species like grizzly bears may be recovered at a local level, but that doesn't mean they recovered nationally. And he says, the Endangered Species Act is meant to be a last line of defense.

Greenwald also takes issue with the complaints about the act. He says species like grizzly bears may be recovered at a local level, but that doesn't mean they're recovered nationally.

Greenwald says the act is an insurance policy for when states fail to protect their species.

"The states have primary jurisdiction over wildlife within their boundaries," he says. "The fact that species get listed reflects that they weren't able to manage that."

He also says states simply don't have the expertise or funding to properly protect their species.

And even with federal and state support, recovery just needs time. Take the Wyoming toad.

Back at Mortenson Lake, Taylor got emotional when she remembered reintroducing toads there for the first time more than 20 years ago when they were still on the brink of extinction.

With tears in her eyes, Taylor said, "seeing all carcass after carcass when they were dying. And we were down to 50 animals ... it's just phenomenal to be out here doing this."

More than two decades since Wyoming toads were reintroduced in this national refuge, scientists say they still need to watch closely to see how many can survive on their own.

Cooper McKim reports for Wyoming Public Radio and for Inside Energy, a public media collaboration focused on America's energy issues.