Accessibility links
'Bigger Than The 6th': Voters Head To Polls In Georgia Race That Hinges On Trump The contest between Democrat Jon Ossoff and Republican Karen Handel has obliterated spending records. A win for the Democrats would be a blow to President Trump, but the race remains incredibly close.

'Bigger Than The 6th': Voters Head To Polls In Georgia Race That Hinges On Trump

'Bigger Than The 6th': Voters Head To Polls In Georgia Race That Hinges On Trump 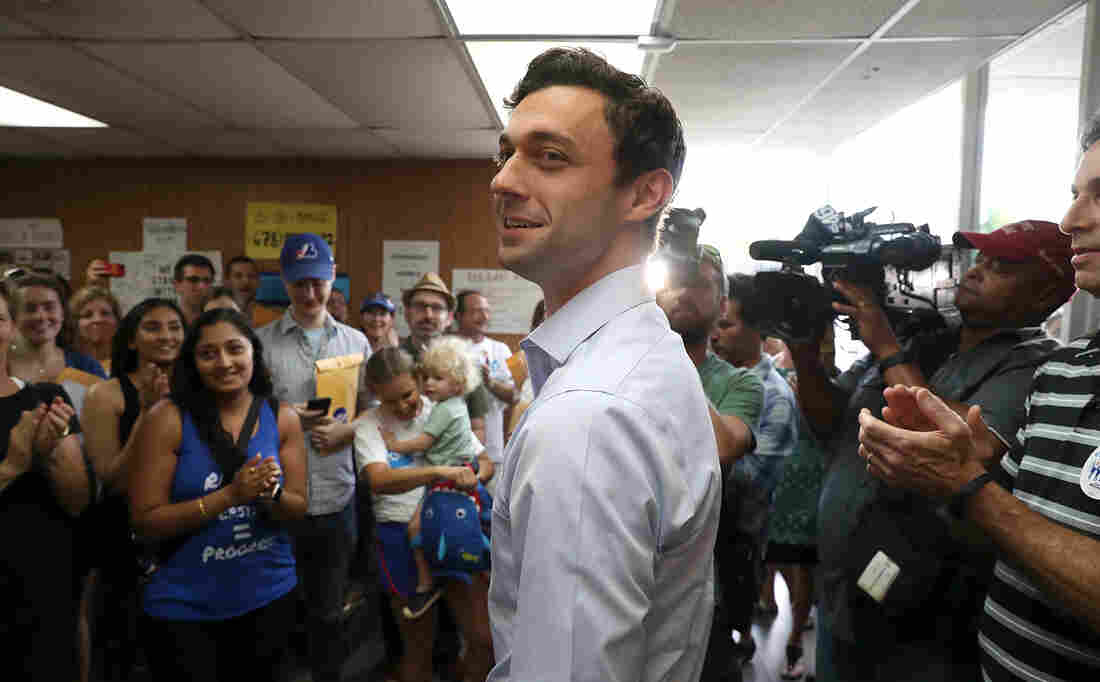 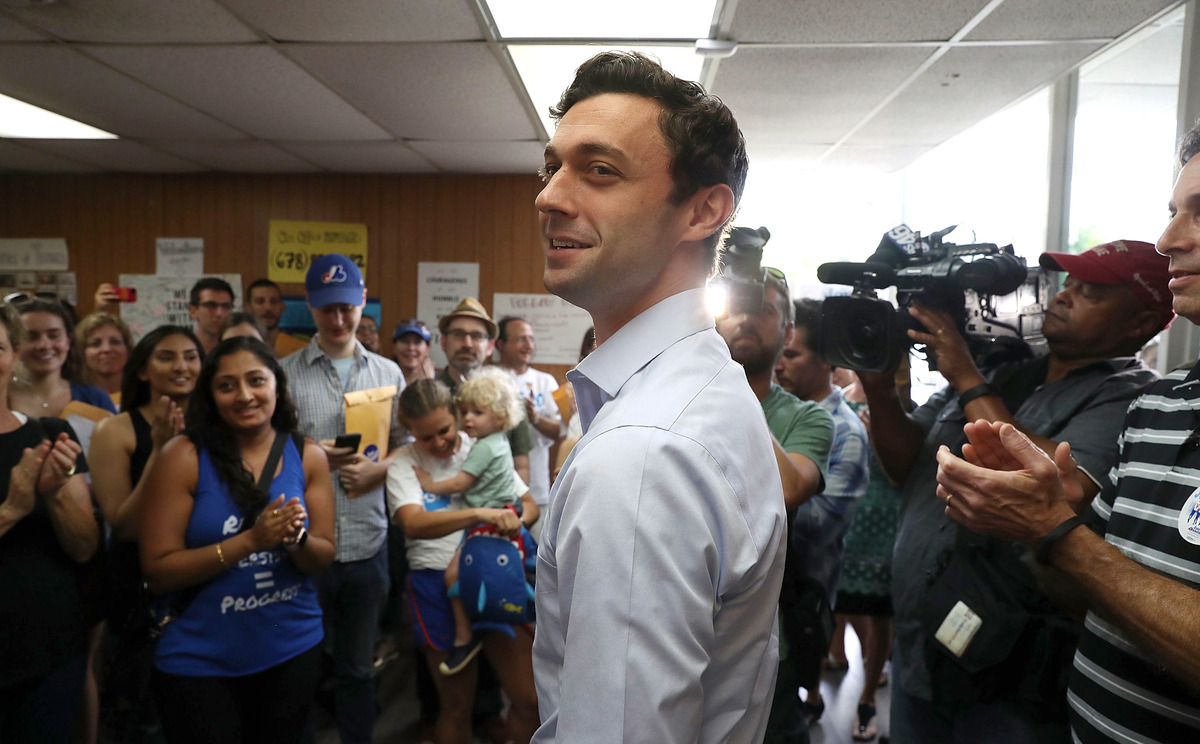 Democratic candidate Jon Ossoff visits a campaign office in Chamblee, Ga., to thank volunteers and supporters on Monday, as the special election for Georgia's 6th Congressional District winds down.

It was supposed to be an easy win for Republicans.

But the more than four-month-long bitter special election fight in Georgia's 6th Congressional District has been anything but simple. Democrat Jon Ossoff and Republican Karen Handel are locked in a tight contest that has obliterated spending records, with tens of millions pouring into the critical contest in the northern Atlanta suburbs with major national implications.

Democrats in Georgia and across the country are hoping a victory on Tuesday by Ossoff, a 30-year-old documentary filmmaker and former congressional aide, would send a message to President Trump and the GOP-controlled Congress.

"It's bigger than the 6th," said Holly Simmel, a volunteer for the Ossoff campaign, who admitted to neglecting her job to spend more time canvassing.

Trump and Republicans in Congress need to take notice, Simmel said, hoping that an upset by Ossoff would portend a coming Democratic wave in the 2018 midterm elections.

GOP races to fend off an upset

Republicans know the stakes are high and are calling the race a "must win."

"I do feel that it's a referendum on Trump. ... I think it's that pivotal," GOP voter Val Douis said outside a recent rally for Handel, a former Georgia secretary of state who has run unsuccessful statewide campaigns for both governor and the U.S. Senate.

Handel and Ossoff are vying to succeed former Rep. Tom Price, whom Trump picked as his health and human services secretary. Before he changed jobs, Price won re-election in 2016 by about 24 percentage points.

Trump just barely won the district in November, and the rapidly changing and diversifying Atlanta suburbs are like many other districts in the country where Democrats hope that frustration with the president can lead to wins in 2018 and possibly flip the House.

The Georgia contest has been a key trial balloon of that theory. But as Democrats have come close to victories in other special elections, the outsize attention and money involved has made the race a near must win for Democrats, too, in order to keep their base motivated and show they can put points on the board amid the uncertainty of the Trump administration.

There is another special election happening Tuesday, in South Carolina's 5th District to replace Trump's Office of Management and Budget director, Mick Mulvaney, but GOP nominee Ralph Norman is expected to easily best Democratic nominee Archie Parnell in an area where support for the president remains strong.

But in Georgia's 6th District, even Trump's allies have acknowledged he is not exactly a boon to the party. And while Handel hasn't entirely distanced herself from Trump, she certainly hasn't fully embraced him, either.

"Some Republicans may even be turned off by our president," Secretary of Agriculture Sonny Perdue, a former Georgia governor, said at a rally with Handel and Price over the weekend.

"There are really two groups of people out there today, politically, there's the 'turned off' and the 'turned on,' " said Perdue, encouraging the crowd of mostly GOP elected officials and party activists to tell their neighbors, friends and family to vote.

The race officially began in February with 18 candidates, including 11 Republicans.

Ossoff got 48 percent of the vote in an April all-party "jungle" primary. The GOP vote was divided, but Handel drew 20 percent of it, sending her and Ossoff into a runoff.

It's Taken So Long To Vote In Georgia, Countries Have Held Presidential Elections

Overall, more than $50 million has poured into the race from the candidates and well-heeled outside groups, nearly double the previous record for spending in a House contest.

While the bank accounts of local TV stations filled up, many voters said they were tired of flyers filling up their mailboxes and repeated phone calls and visits from volunteers.

"The earlier you vote, the sooner they stop coming to your house (and) hopefully stop calling your house," said an exasperated Bridgett Fields, outside a polling place.

More than 140,000 people voted early ahead of the deadline last Friday, and overall turnout is expected to surpass that of the 2014 midterms.

In an attempt to appeal to the district's moderate voters, both candidates have sounded bland at times, as they try to avoid stepping into the political fights embroiling Washington.

But the race has not been immune from national news, taking on a dark tenor in the final stretch after last week's shooting in Alexandria, Va., during a congressional GOP baseball practice. Five people were injured, and House Majority Whip Steve Scalise remains in the hospital in serious condition. An ad by a little-known super PAC sought to tie Ossoff to the alleged gunman, who appeared to be motivated by anger at the GOP and Trump.

"When will it stop?" a narrator asks in the ad. "It won't if Jon Ossoff wins on Tuesday, because the same unhinged leftists cheering last week's shooting are all backing Jon Ossoff. And if he wins, they win."

Both Ossoff and Handel have condemned the ad. And there have been security concerns among both candidates after the shooting. Handel and her neighbors recently received letters with a white powder, but it was later determined not to be hazardous. Ossoff said that his campaign has received threats and that he has hired a security detail.

But at least one local Republican official told The Washington Post that last week's tragedy could end up boosting the party's base turnout.

"I'll tell you what: I think the shooting is going to win this election for us," Brad Carver, the GOP chairman of the neighboring 11th Congressional District, said. "Because moderates and independents in this district are tired of left-wing extremism. I get that there's extremists on both sides, but we are not seeing them. We're seeing absolute resistance to everything this president does. Moderates and independents out there want to give him a chance. Democrats have never given this president a chance."

In an effort to save the seat, several top Republican politicians have made stops in the district. Trump held a fundraiser for Handel in April. More recently Vice President Pence and House Speaker Paul Ryan joined her on the campaign trail.

"Georgians are going to help determine the direction of this country. You know what we're going to do this summer, we've got to repeal and replace Obamacare," Ryan said when he visited the district last month. "We need [Handel]. We need her help."

Ossoff and Handel are clearly divided in their positions on health care, and that issue alone could be a deciding factor for many voters. Handel has cheered Republicans in the House for passing the controversial American Health Care Act, while Ossoff said he would have voted against it. A poll last week by The Atlanta Journal-Constitution, which gave Ossoff a slight lead, found that 62 percent of voters in the district had an unfavorable opinion of the AHCA and that 81 percent called health care a very important issue in deciding whom to vote for. 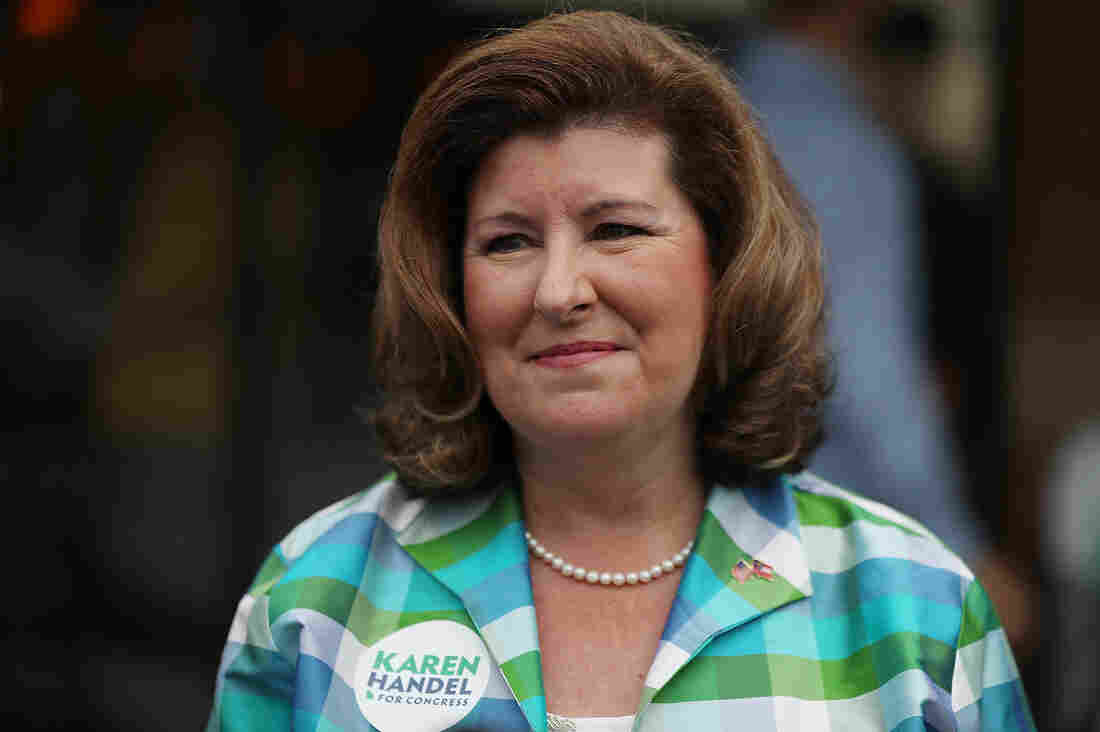 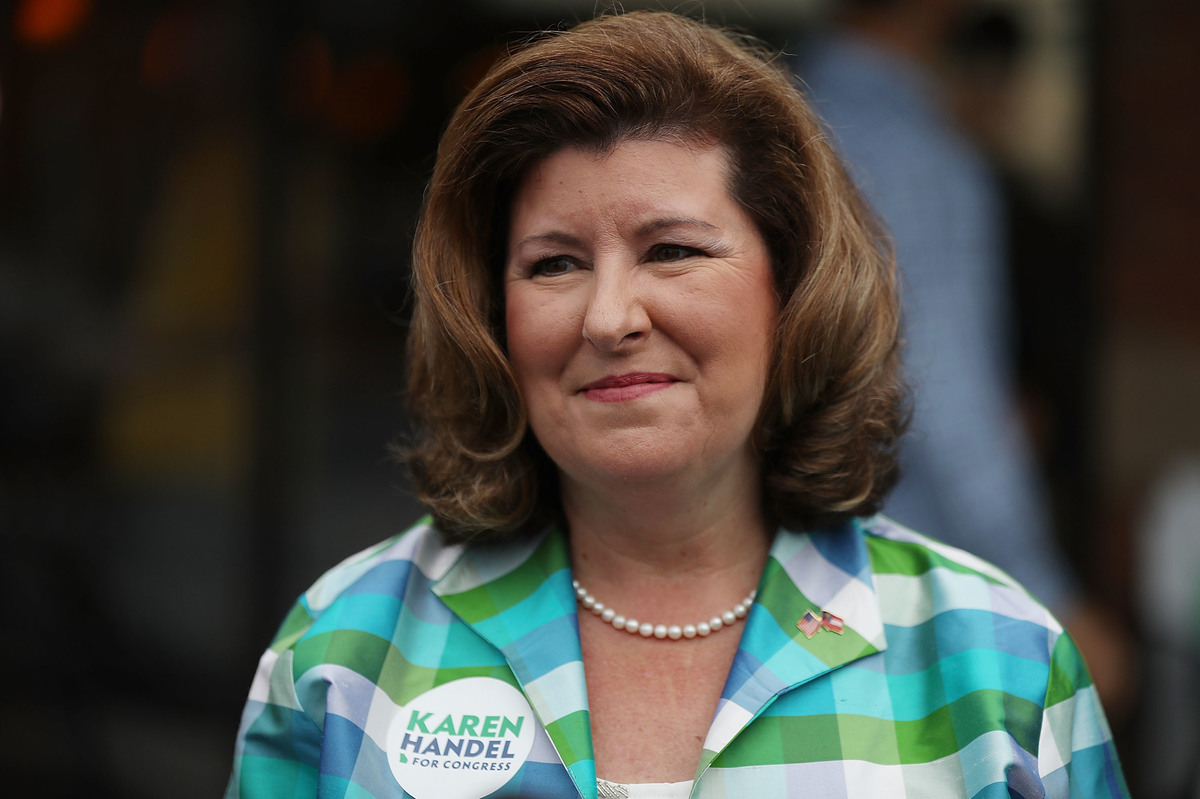 Republican candidate Karen Handel greets people during a campaign stop in her bid for Georgia's 6th District seat on Monday in Alpharetta.

Abortion has also been a central issue in the race. In 2012, Handel was vice president of the Susan G. Komen Foundation, a breast cancer nonprofit. She pushed for the group to stop funding Planned Parenthood, and Handel resigned after the move ignited backlash.

Democrats and Ossoff, who is backed by Planned Parenthood, have made that a key issue in the contest, and he is banking on heavy turnout by female voters to help him win.

Despite the national attention the race has received, big-name Democrats haven't shown up in the Atlanta suburbs to support Ossoff. While some of his early ads touted how he would stand up to Trump, the first-time candidate has tried to cut a centrist profile, calling for "cuts to wasteful spending" and high-tech job creation in his TV ads, which often don't say he is a Democrat.

On the campaign trail, Handel has repeatedly painted Ossoff as an outsider and a carpetbagger, tying him to House Minority Leader Nancy Pelosi. GOP attack ads have echoed that message, which Republicans believe is an effective one.

Although he grew up in the 6th District, Ossoff won't be able to vote for himself because he currently lives just south of the district with his fiancée while she attends medical school.

Ossoff's campaign has been boosted by an army of volunteers from inside and outside the state, many of whom had never been involved in politics before or were looking to be more involved after the 2016 election.

The news around that time was making Laura Phipps' stomach turn, so she signed up to ride on an Ossoff campaign bus from North Carolina with her son to volunteer in Georgia.

"It's much less frustrating when you're working, when you're doing something," Phipps said.

Whoever wins the 6th District race will only have a few months before the 2018 election campaign begins, and he or she will be the most junior member of Congress. But clearly the election is about much more than that.

"This is a harbinger of national politics," Perdue said Saturday. "And the world is looking; the nation is looking."