Accessibility links
Checking In On 'Better Call Saul' (And 'Breaking Bad') At The 3-Season Mark Both shows track the moral decay of their main characters, so we compare Jimmy McGill's arc, as of Sunday's Better Call Saul season finale, to that of Walter White after three seasons of Breaking Bad. 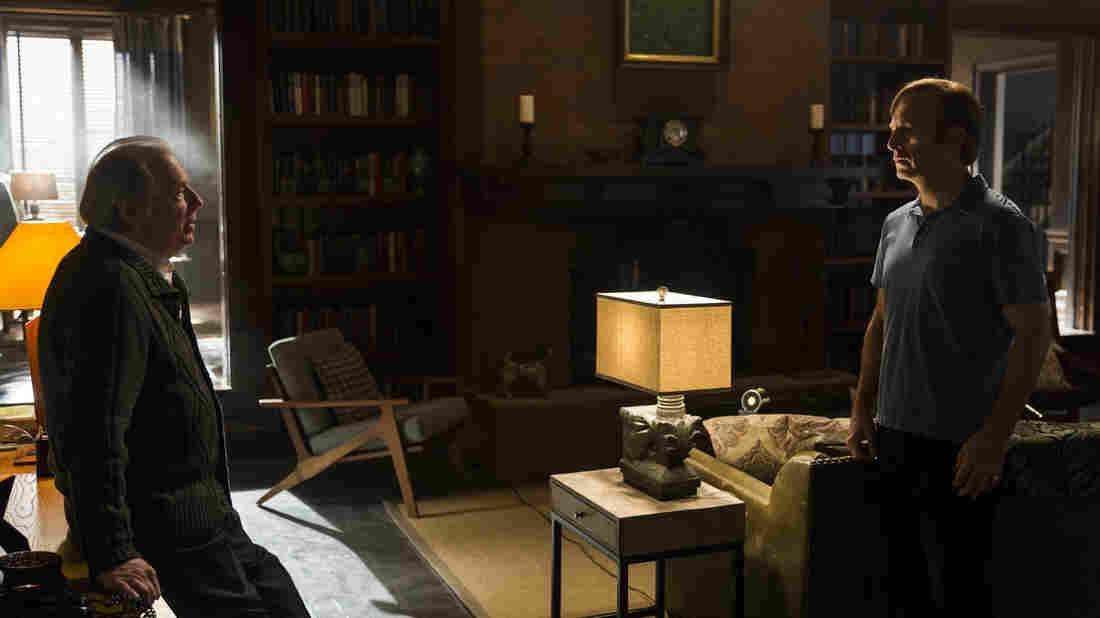 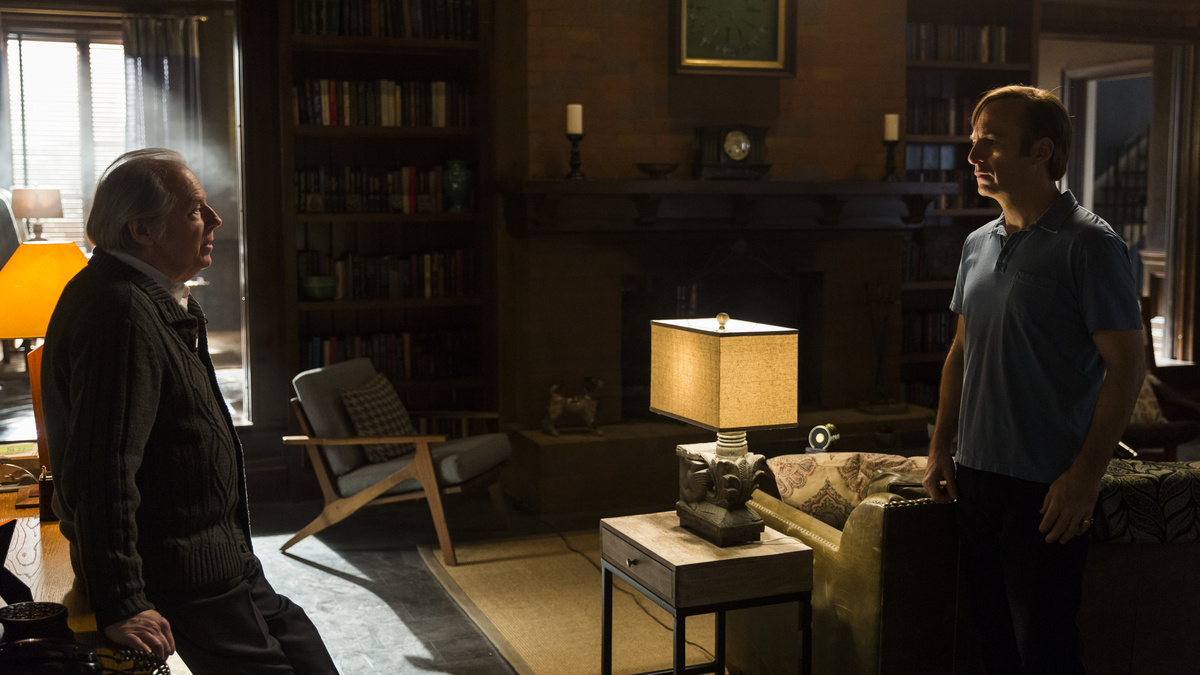 In "Lantern," the Season 3 finale of Better Call Saul, brothers Chuck (Michael McKean) and Jimmy (Bob Odenkirk) reach the end of their relationship.

Contains spoilers for both Better Call Saul and Breaking Bad.

Beginning in 2015, its spin-off/prequel Better Call Saul has tasked itself with following small-time lawyer/recovering scam-artist Jimmy McGill (Bob Odenkirk) as he gets drawn into the criminal underworld to become the gleefully corrupt, perennially hustling shyster known as Saul Goodman. Saul's third season wrapped up Sunday night.

But comparing where Walter White and Jimmy McGill find themselves along their respective downward trajectories as of the three-season mark helps to clarify the two shows' shared narrative DNA — and to underscore their stark differences.

By the end of "Full Measure," Breaking Bad's season-three finale, Byran Cranston's Walter White was not yet The One Who Knocks. Not quite.

He was more The One Who Calls Ahead And Asks Sort of Menacingly If He Could Pop By And Get A Few Minutes Of Your Time.

Oh sure, he'd violently murdered four people, ordered the killing of another, and was responsible for the death of many more, both through action (unleashing a prohibitively addictive drug upon the population) and inaction (failing to save the life of a young woman, whose death indirectly led to a massive airline disaster — look, it's a long story).

But after three seasons (a total of 33 episodes), Walter White was still convincing himself that his criminal career was a means to an end, a last-ditch gambit to provide for his family after his death. Throughout season three, he regularly displayed flashes of the imperious, proud and inflexible crime-lord he would become — particularly in his sneering, tetchily dismissive treatment of Aaron Paul's Jesse Pinkman — but Cranston also took pains to let the mild-mannered chemistry teacher's roots show. The actor was still leaning into the comedy of the role, letting White seem nervous, desperate, overmatched by the forces swirling around him.

There is no game-changing moment, no turning point, that transforms White into Heisenberg. That's the show's strength. Scene to scene, episode to episode, there is a constant push and pull. But the thing about "two steps forward, one step back" is that, over time, it will get you where you're going. And we all know where Walter White is going. 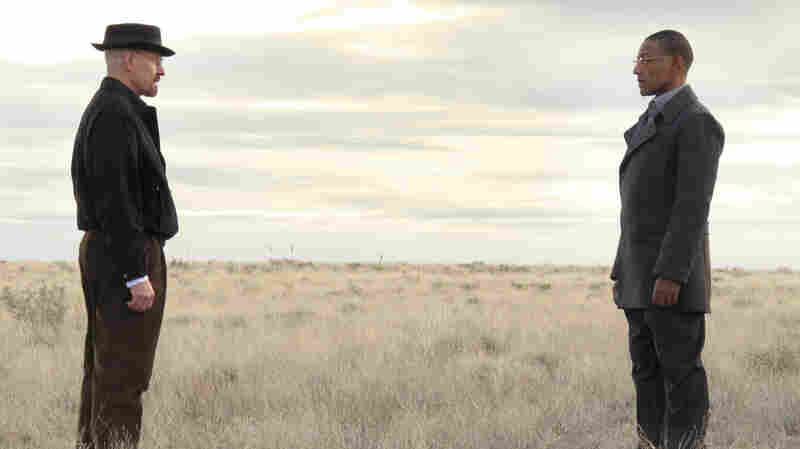 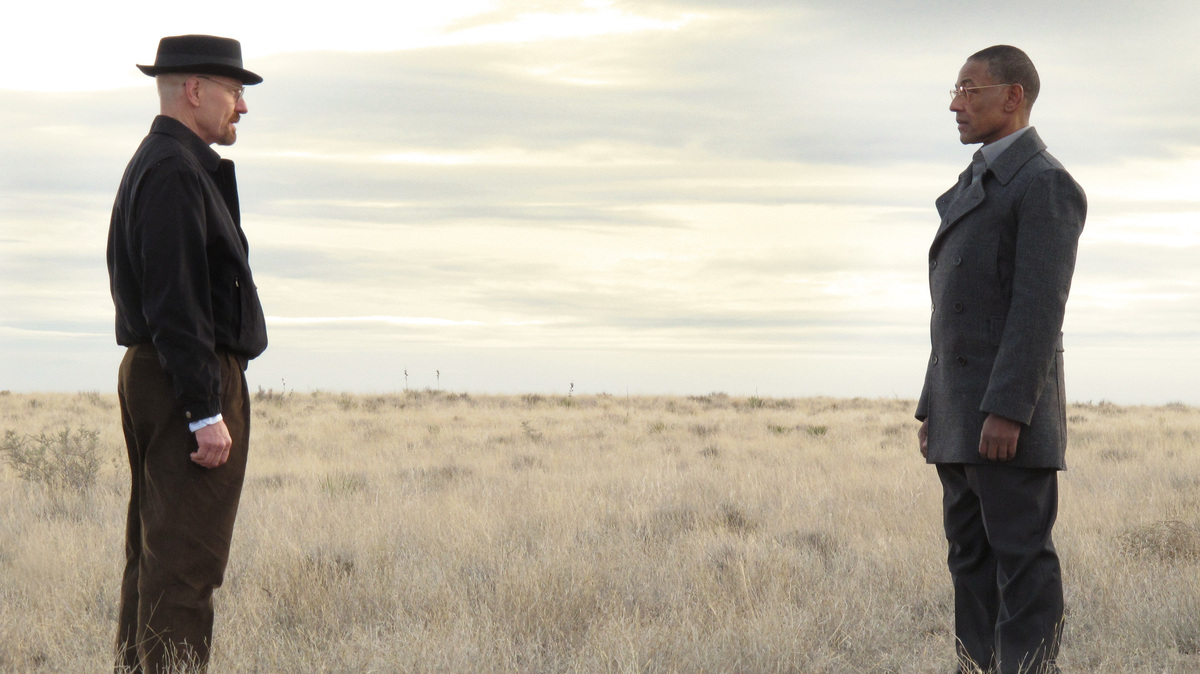 In "Full Measure"'s first act, the White who meets with drug-lord Gus Fring (Giancarlo Esposito) in the middle of the New Mexico desert is calm rational, and in control. It's an act, yes — White is assuming the mask of a man who can discuss, with a cool, scientific detachment, the very real possibility that Fring will murder him, there on that spot.

In the episode's final act, White adopts another mask — that of a man blindly panicking that he is about to be murdered by Fring's lackey Mike Ehrmantraut (Jonathan Banks). But with a phone call to Pinkman, in which he dispatches his partner to murder a colleague (David Costabile's placid Gale), the mask slips, and in that devious, victorious smirk, we see the face of Heisenberg.

Many more heinous acts lie in his future, over the next two seasons. But this is the man he will become, the man who knows himself thoroughly — who knows, as he will finally admit with pride in the series finale, that he did what he did because "I liked it. I was good at it. I was alive."

Saul, Midway On The Road To Damascus

The Jimmy McGill of the first three seasons of Better Call Saul has a lot in common with the Saul of Breaking Bad. He's clever, he's voluble and he's an inveterate cutter of corners.

When we learn of his past as a small-time con-man and perennial screw-up, it doesn't surprise us, exactly. It just helps us understand where some of Saul's very particular set of skills came from. We also see that Jimmy McGill is deeply conversant with the law, and its sundry loopholes. That checks out, too.

What we conspicuously haven't seen, in these first three seasons, is evidence of the very worst aspects of Breaking Bad's Saul — his coarseness, his unapologetic sliminess, and his blithe ability to recommend, for example, that murdering a witness represents an efficient way to avoid sticky legal trouble.

That's because for these first three seasons of Better Call Saul, Jimmy McGill has had three things outside of himself to care about, and care about deeply: Chuck (Michael McKean), his withholding older brother, Kim (Rhea Seehorn), his partner in life and law practice, and his surprising — and surprisingly sincere — passion for elder law.

Each of these three aspects of Jimmy's life ground him in an existence devoted to the service of others. With the season three finale, "Lantern," two of those tethers are severed forever.

Jimmy's life has been shaped by Chuck in uncountable ways. He's lived in his brother's shadow, even — especially — when he fought to escape it with a career as a scam artist. He's striven for Chuck's approval, following him into the law profession — an act that only served to incur Chuck's abiding disgust. And when Chuck succumbed to a debilitating condition, Jimmy dutifully assisted him, because to do anything else was not something Jimmy, as we know him, could imagine.

The perennially strained relationship reached its breaking point this season, and Jimmy's last-minute attempt to salvage it in the season finale only earned him an emotional disemboweling from which he'll never recover. Chuck won't be around to apologize, much less grant Jimmy the brotherly and professional approval and attention he's craved for so long. Jimmy will also spend the rest of the show's run dealing with the knowledge that all his selfless efforts on Chuck's behalf weren't enough.

And when we first witnessed Jimmy's attempts to work his way into the lives — and wills — of the elderly residents of Albuquerque, we naturally regarded it in the context of his past as a scammer. But we soon came to appreciate the surprising fact — which likely surprised Jimmy, too — that there was something more than smarm to his relationships with these men and women (well, women, mostly). He had their best interests at heart. And he was good at it.

All of that, too, came to an abrupt and shattering end in Sunday's season finale.

Better Call Saul, Season 4: It's All About Kim

Without Chuck or the residents of Sandpiper to counter his worst instincts, Jimmy McGill's preordained descent into the moral bankruptcy of Breaking Bad's Saul Goodman can only accelerate. How quickly this happens over the rest of the show's life, be it one season, two, or (please no) more, depends entirely upon Kim.

She's been a clear-eyed, completely equal partner for much of these first three seasons, a fact around which the rest of the show's run will likely revolve. Unlike Chuck, who understands Jimmy but regards him with disdain, or the Sandpiper clients, who see only the unctuous mask Jimmy puts on, Kim alone sees him for who he is, and accepts him. Loves him, even.

There are signs of stress in that relationship lately, which over the next season or so can only lead to fissures, and collapse. On the Better Call Saul Insider podcast, an episode-by-episode, behind-the-scenes discussion with the show's cast and crew, Seehorn, Odenkirk and show creators Vince Gilligan and Peter Gould have all half-jokingly asserted that it's perfectly conceivable for the Saul of Breaking Bad to still be together with Kim, even though we never saw her during that show's run.

It may be conceivable, but it's not possible.

The Breaking Bad Saul Goodman is not a good man. There's none of the interior conflict Odenkirk brings to his Better Call Saul's Jimmy. Which only makes sense — Saul Goodman is a secondary character, tasked with advancing the plot and delineating Walter White as a protagonist. But Jimmy McGill is a primary character, rounded and real, with nuances that keep us watching — and guessing.

For one to become the other, those nuances, those conflicts, have to get papered over, or swallowed, or discarded. And Kim, for her part, believes in Jimmy McGill, but she'd never believe in Saul Goodman. Which is why the story that remains to be told on the remaining episodes of Better Call Saul is, in a very real sense, Kim's story.

Which probably won't end well, for either of them.