Accessibility links
Senate Republicans Reveal Long-Awaited Obamacare Overhaul The Senate's long-awaited "Better Care Reconciliation Act" was written largely in secret, with even many Senate Republicans unaware of what was in it. 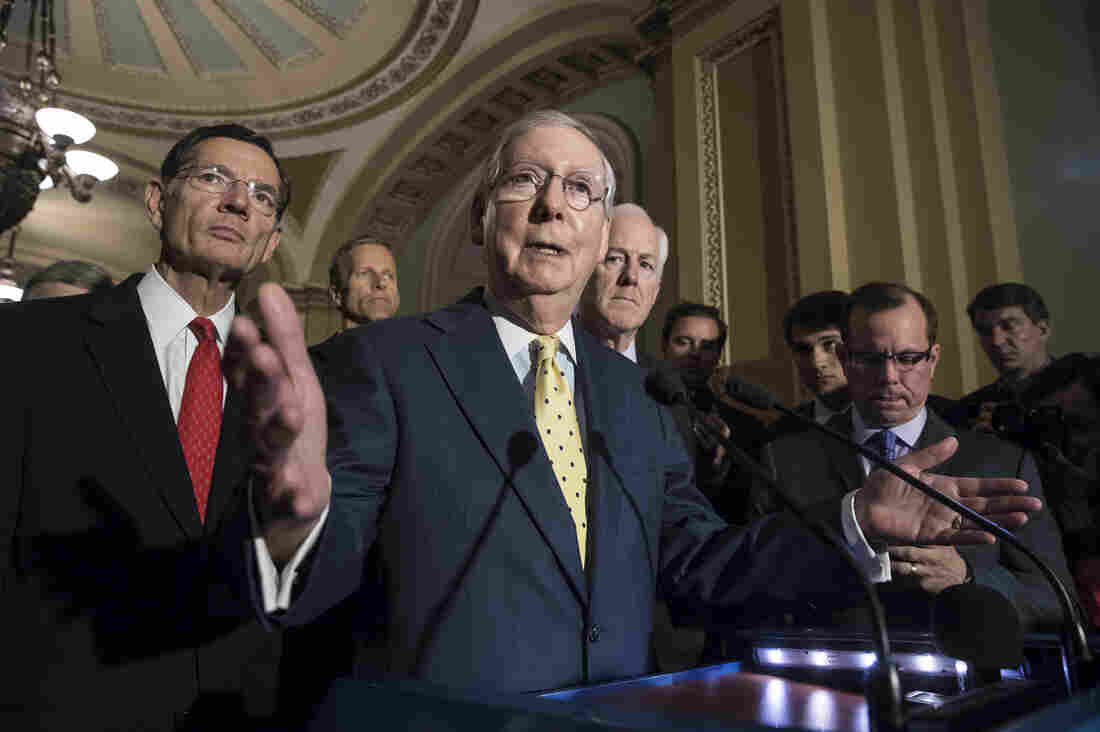 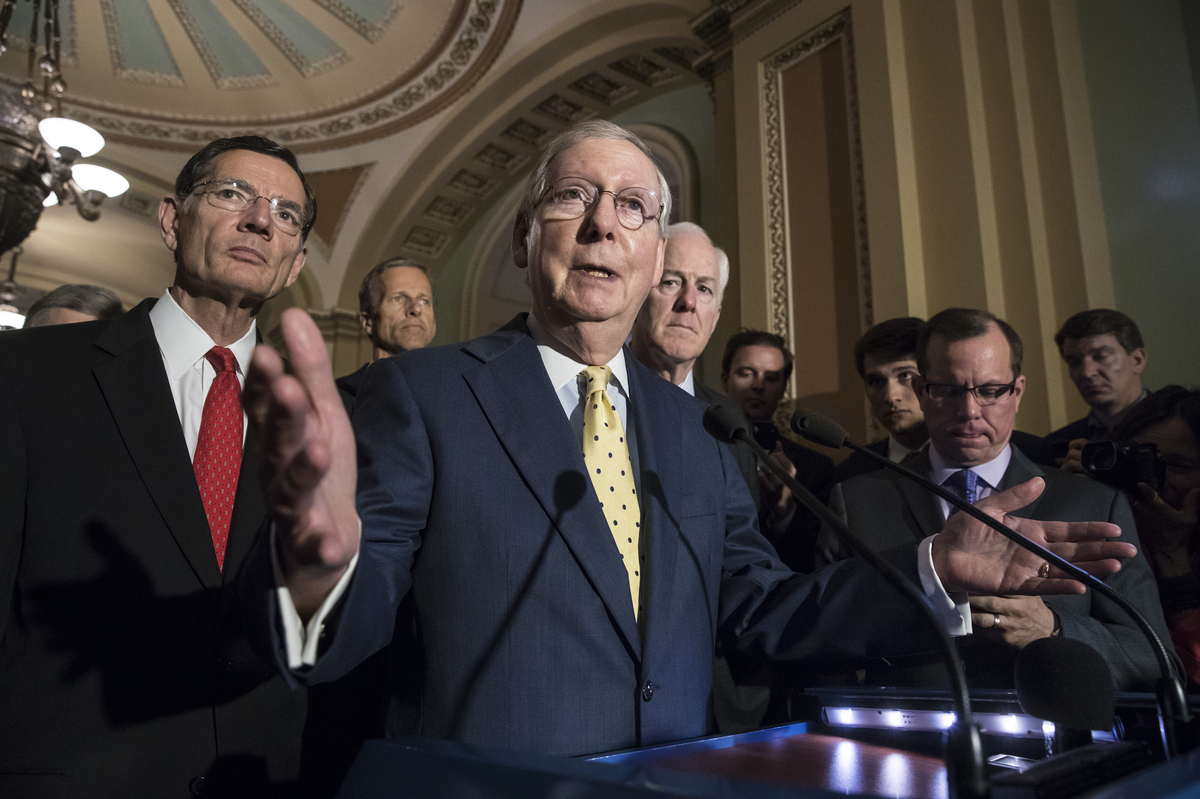 Senate Majority Leader Mitch McConnell, joined by other Republican senators, meets with reporters following a closed-door strategy session at the Capitol on Tuesday.

Senate Republicans unveiled their long-awaited health care overhaul proposal on Thursday. The Senate bill, called the "Better Care Reconciliation Act," would repeal major parts of the Affordable Care Act, also known as Obamacare. The broad outlines of it look a lot like the House bill, the American Health Care Act, which was passed in May.

It rolls back the ACA's Medicaid expansion — making for deep spending cuts to that program, compared with current law. The Senate bill also proposes eliminating many ACA taxes, and the employer penalties associated with the employer and individual mandates would be repealed retroactively, dating to the start of 2016. And as in the House bill, young adults up to the age of 26 could stay on their parents' health care plans.

Larry Levitt, a health policy expert at the Kaiser Family Foundation, summed up his thoughts on the bill Thursday on Twitter: "In broad strokes, the Senate bill is just like the House: Big tax cuts, big cut in federal heath spending, big increase in the uninsured."

As with the House bill, the Senate proposal also allows insurance companies to charge older people five times more than younger people — under the ACA, that ratio is 3 to 1. That's just one provision that could hit older Americans hard.

A small group of Republican senators has written the bill in secret in recent weeks, with many Americans and even some fellow Republicans eagerly awaiting details about what's in it. After the bill was released on Thursday, protesters gathered outside Senate Majority Leader Mitch McConnell's office. Video from NBC showed police removing some of those protesters from the hallway.

Some of the biggest changes this bill makes are to Medicaid, the entitlement program that provides health care to low-income Americans. In that sense, it looks like the House bill, which the CBO said would cut Medicaid by $834 billion over a decade (relative to current law), with a loss of 14 million beneficiaries.

Both bills roll back a Medicaid expansion undertaken under the Affordable Care Act. That law extended the program to some low-income Americans above the poverty level. The Senate proposal would roll back that expansion, though it would do so more slowly than the House bill proposes.

As did the House, the Senate also proposes giving states either a per capita cap on Medicaid spending or a block grant of funds. That's a fundamental change; currently the program is "open-ended," meaning funding increases as need increases.

"That's a big deal. It's a big shift," said John Corlett, president of the Center for Community Solutions, who also served as a director of Ohio's Medicaid program. "It means billions of dollars less in federal aid to states for their Medicaid programs."

The Senate bill is also much like the House bill in that it would repeal most of the taxes associated with Obamacare (it would bump out the implementation of the so-called Cadillac tax on expensive, employer-sponsored health care plans, from 2025 to 2026).

Repealing those taxes, as the Tax Policy Center reported in May (regarding the AHCA), would overwhelmingly benefit higher-income Americans. The taxes in the Affordable Care Act were largely progressive, as Kyle Pomerleau of the right-leaning Tax Foundation told NPR.

To one health policy expert, those tax cuts, combined with the cuts to Medicaid, mean the bill isn't a health care overhaul.

"It is a tax-cut bill, and they had to find a way to finance it, and Medicaid beneficiaries are going to be the ones who hurt," said Nicholas Bagley, a University of Michigan Law School professor who specializes in health law.

One other big change this bill could make is creating a new system for who gets premium tax credits, and how big those premiums are.

For example, it cuts the upper-income limit that determines who gets premium tax credits. Currently, that upper limit is at 400 percent of the poverty level. This bill would limit that to 350 percent.

It also would determine those credits based on age and income — that's a change from the House bill, which based credits mostly around age.

More similarities with the House plan

There are a few other ways the Senate bill mirrors the House bill. It bans the use of any federal funds for any health care plan that covers abortion, except in the cases of rape, incest or where the pregnancy puts the mother's life in danger. And it also would defund Planned Parenthood for one year.

As of 2020, the bill also eliminates cost-sharing subsidies that help low-income Americans pay for their insurance.

And the Senate's proposal allows states substantial freedom in determining their own health care programs — but it's even more freedom than the House bill allows for. Under the Affordable Care Act, states can apply for "innovation waivers" exempting them from parts of the law and allowing them to determine their own health care systems, to an extent.

However, there are strict rules in place — what health policy experts call "guardrails" — stating that states getting those waivers must provide coverage that is "at least as comprehensive" as they would otherwise provide, as the Centers for Medicare and Medicaid Services explains.

The Senate proposal changes those guardrails, saying that states can get those waivers, as long as their alternative plans simply don't increase the deficit. That allows states to make some big changes if they'd like — for example, changing the "essential health benefits" that insurers are required to provide under Obamacare.