Accessibility links
Meyers Chuck, AK, 99903 Meyers Chuck is off the grid, with no roads or cars; just a sprinkling of houses on the water, and a post office that's the social hub of town. 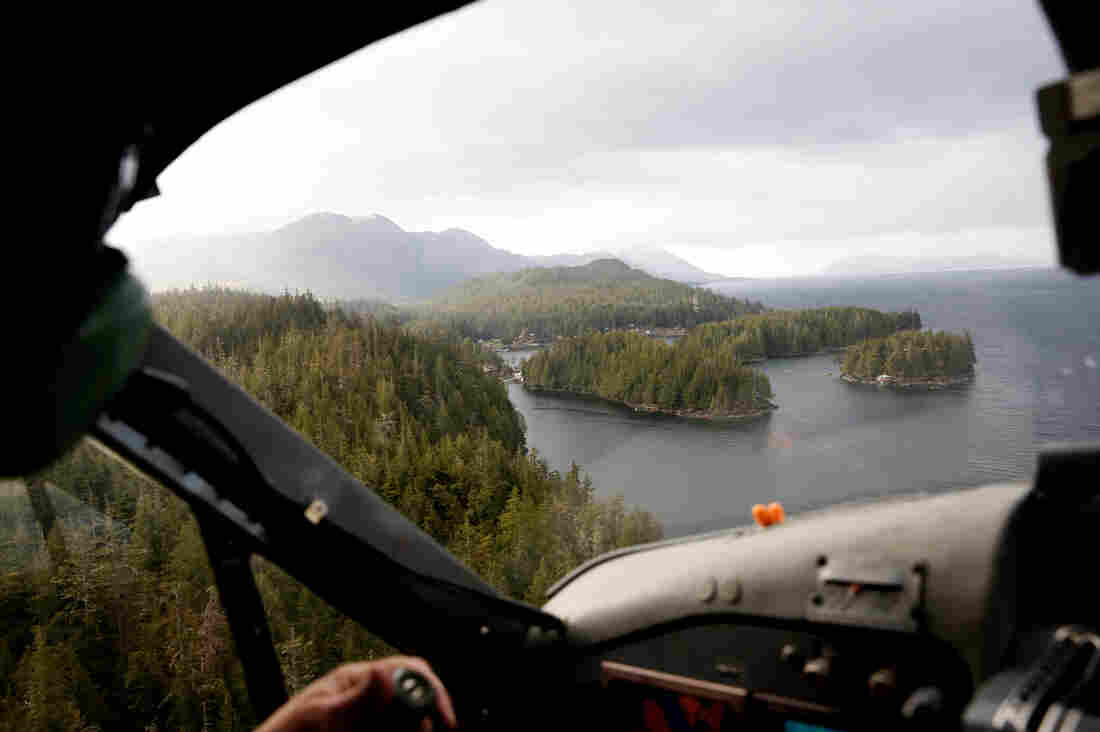 The mail plane flies into Meyers Chuck. Meyers Chuck is off the grid, with no roads or cars; just a sprinkling of houses on the water. Elissa Nadworny/NPR hide caption 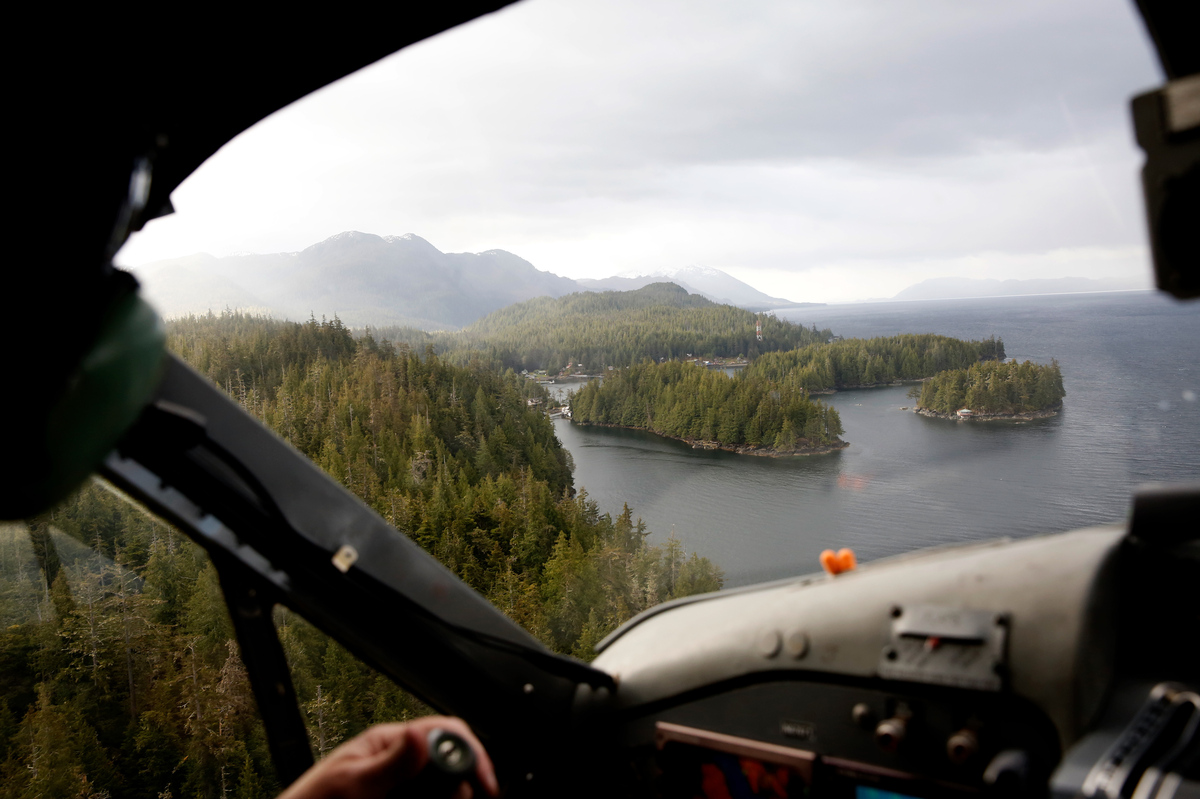 The mail plane flies into Meyers Chuck. Meyers Chuck is off the grid, with no roads or cars; just a sprinkling of houses on the water.

There are only two ways to get to Meyers Chuck, Alaska: by boat or float plane.

If you go by plane, you might hitch a ride on a de Havilland Beaver, circa 1958 — one of the planes that brings the mail every week. It comes in low over specks of islands and the forested Alaska coast, and curves into the protected inlet of Meyers Chuck, splashing down at high tide.

On the day we visit, a handful of boats are tied up along a floating mooring. Small wooden cabins are nestled among the trees.

Meyers Chuck is off the grid, with no roads or cars, and even by Alaska standards, it's tiny. Summer is the busy season, when people boat up to their cabins and swell the population to 25 or so.

In the winter, that drops to about five, or sometimes even just two: Cassy and Steve Peavey. 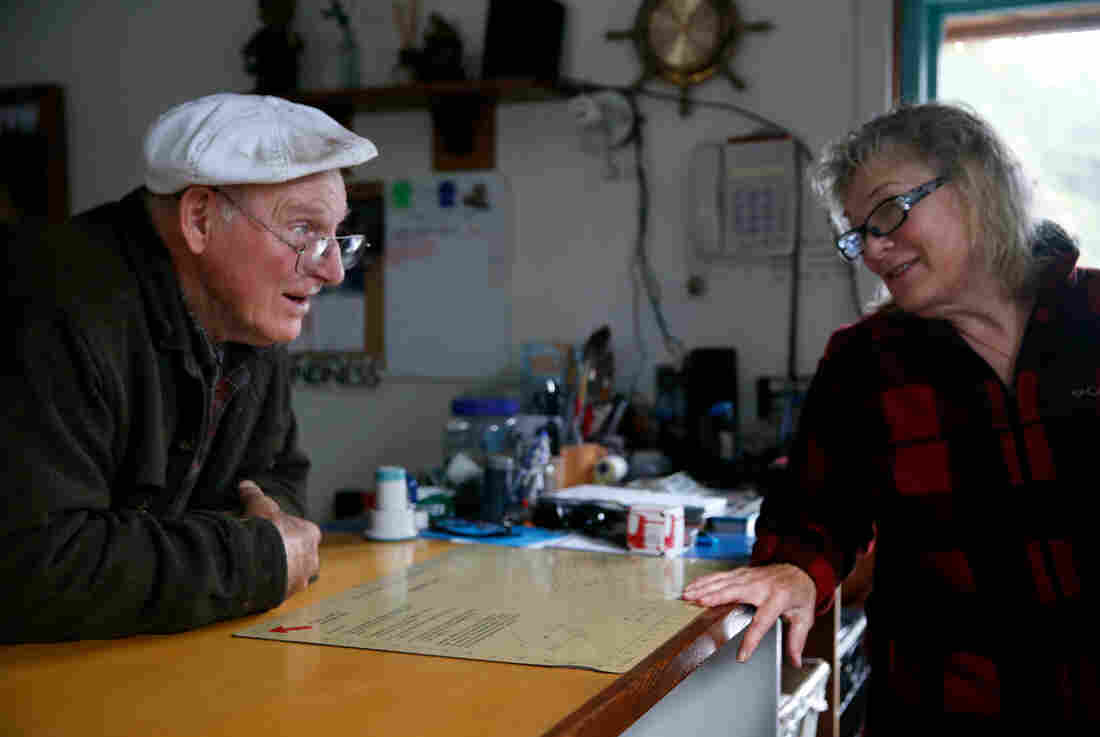 Cassy Peavey, with help from her husband Steve, runs the post office in the town of Meyers Chuck. Elissa Nadworny/NPR hide caption

Cassy Peavey, 74, is the postmistress of Meyers Chuck, and Steve, 79, is her husband. The Peaveys have heard the mail plane approach, and are waiting for us on the dock. Today, the plane is delivering about 90 pounds of mail and groceries to Meyers Chuck.

Together, Cassy and Steve haul the bags and boxes up the ramp from the dock and into the tiny post office, which is perched on pilings on the rocks.

Steve Peavey and some friends built this post office out of cedar two-by-fours; Cassy painted the wooden sign that hangs outside, facing the water, with Meyers Chuck's wonderful, edge-of-the-country zip code: 99903.

Cassy has been postmistress of Meyers Chuck for 15 years, and this is her domain. "She's the backbone of the community!" Steve says, proudly.

She gets busy opening the mail bags and sorting the week's influx of bills, catalogs and magazines (including, on the day we visit, the fishing newsletter Spawning News).

By now, she could probably sort this mail with her eyes closed. 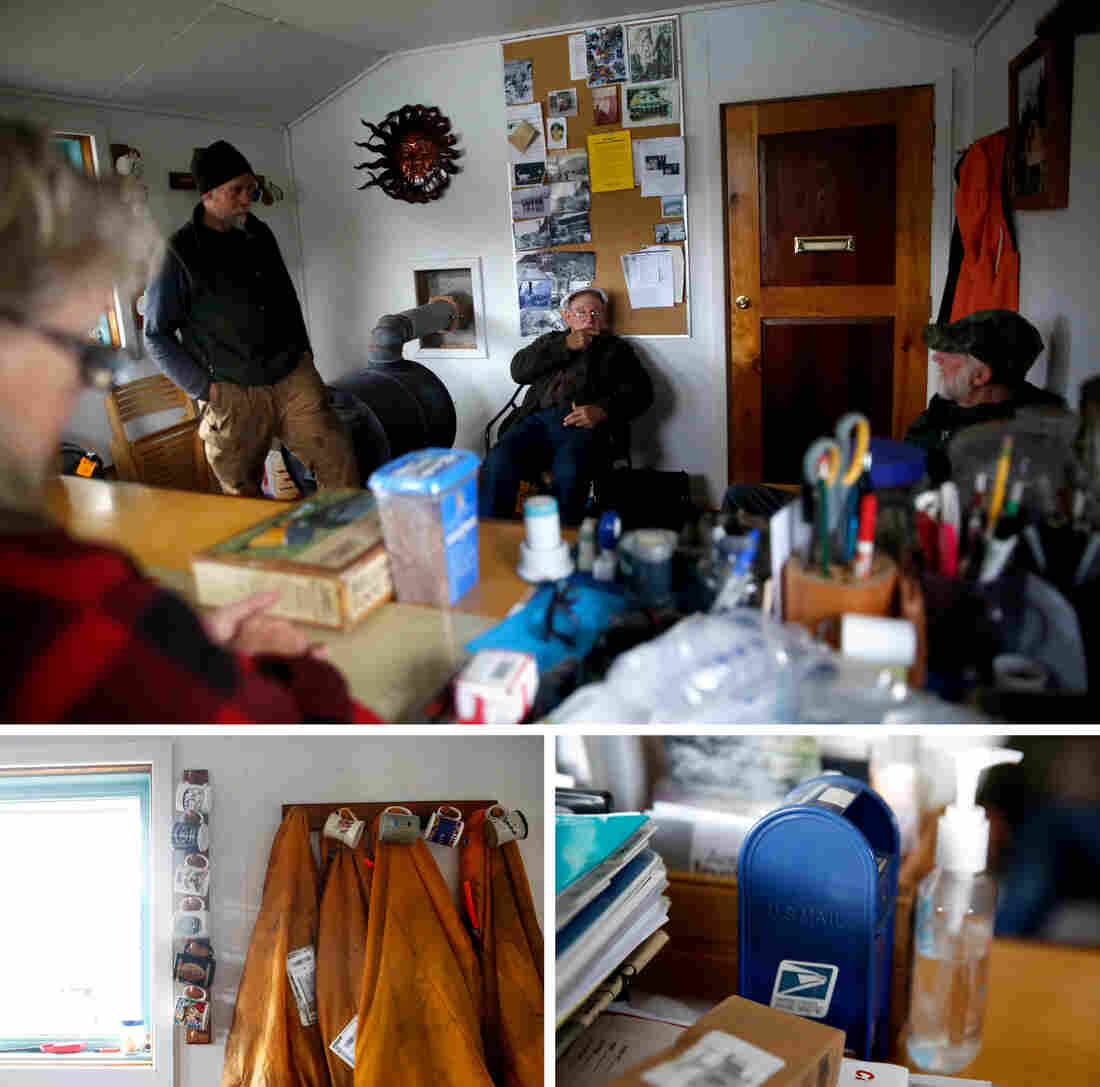 On Wednesdays, folks in Meyers Chuck flood the post office to pick up their mail. The office is small — a single room — and peppered with trinkets. Elissa Nadworny/NPR hide caption

There are just 18 mail slots for everyone in town.

Every Wednesday, when the mail is sorted, Cassy hangs the American flag outside, and that's the cue for folks to come by.

On this day, Darrell Lee is happy to see that his blackberry seeds have arrived in the mail. Bob Hunley swings by, and hurray! He's finally gotten a much-awaited part for his generator.

No mail for Dave Perry today, but it doesn't matter – a visit to the post office is a chance to shake off your solitude, see your neighbors, trade advice on outboard motors or comment on the weather. "Seemed like kind of a one-gust storm," Bob Hunley offers. "Seemed like we had one good gust there yesterday afternoon and then it just kinda fizzled out after that."

You can settle in by the crackling wood stove with a cup of coffee and one of the cookies or cinnamon rolls that Cassy will have baked that morning. 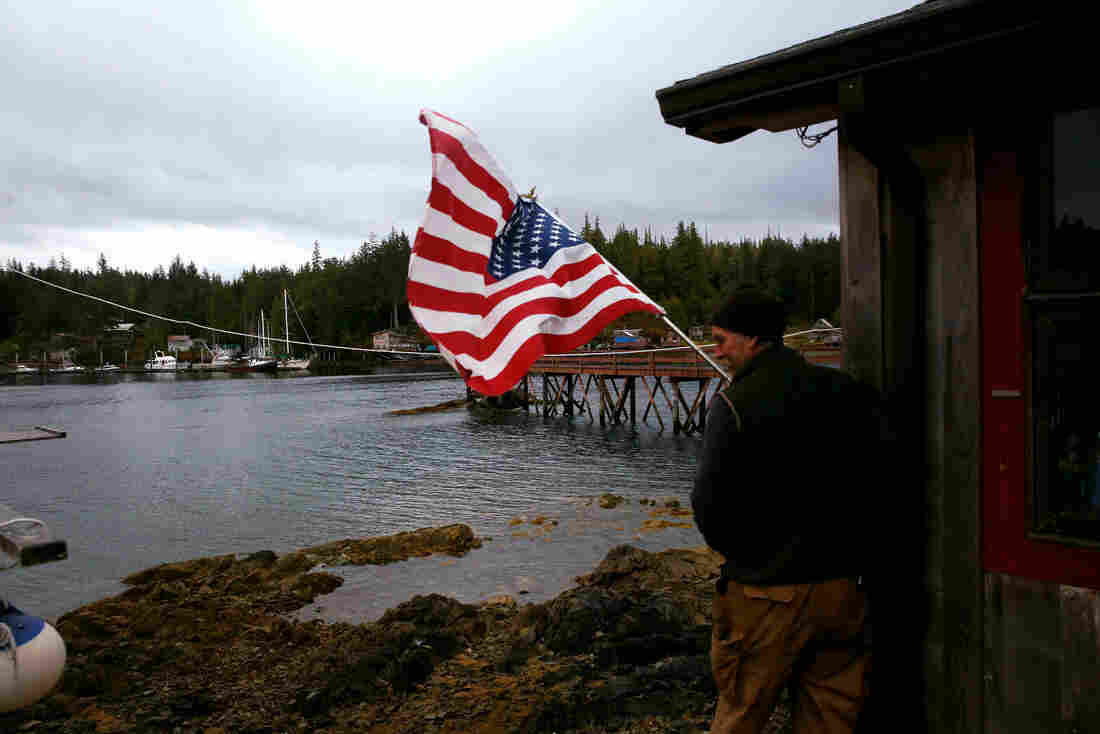 Darrell Lee, 54, puts up the American flag outside the post office — which signals that the mail has arrived in Meyers Chuck. Elissa Nadworny/NPR hide caption

The mugs are right there, hanging on hooks on the wall. "Everybody knows their own," Cassy says. "There's a couple of guys that are pretty touchy about people using their cup."

And if — like Gary Nielsen — you boat over to the post office in your skiff, and it's hard for you to climb up on the dock, well, Steve or Cassy will bring your mail down to you. "Thanks, Steve! See ya next week!" Nielsen calls as he motors away.

Cassy keeps a jar of red licorice sticks on the post office counter (5 cents apiece), right next to a jar for residents to leave their $50 contribution for the annual community fund, to help with village upkeep.

She has just one rule at the post office: Please, no talking about politics.

"Yeah, I get talked to every once in a while," Steve admits. 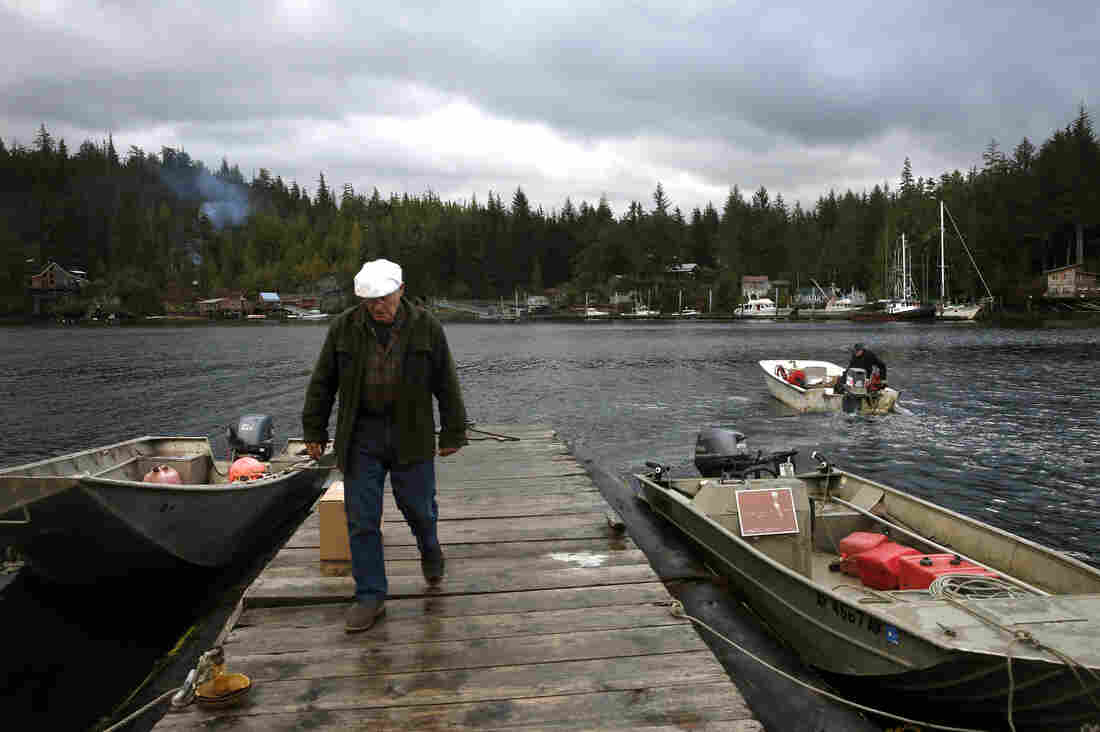 We've walked up to the Peaveys' cozy home, just a few steps up a path from the post office, where Cassy offers tea and her famous cinnamon rolls.

The Peaveys reminisce about days gone by, when Meyers Chuck was a busy fishing town, filled with characters known by their marvelous nicknames:

(Not to be confused with Greasy Gus.)

Now, those nicknames are a thing of the past.

Steve and Cassy Peavey share the sweet familiarity of two people who've known each other nearly their whole lives. They laugh easily, call each other "babe", and often finish each other's sentences. 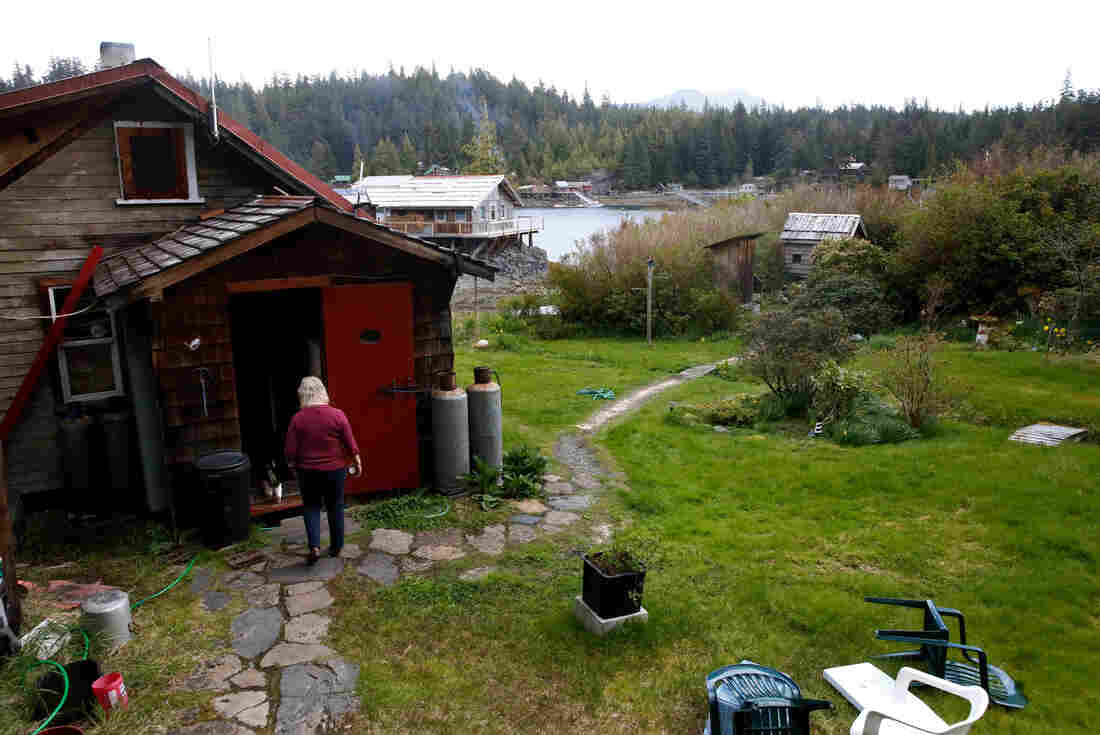 Cassy and the family cat walk across the Peaveys' property in Meyers Chuck, a view of the water in the distance. Elissa Nadworny/NPR hide caption

They met in school when she was 10 and he was 15, in Kasaan, Alaska, on nearby Prince of Wales Island.

Later, when they were courting, Steve would row from Meyers Chuck to Kasaan to visit Cassy: 30-some miles, in a rowboat. Crazy, but true.

Steve shrugs and laughs. "Just a little stroll in the park!"

He grew up in Meyers Chuck, and he and Cassy moved back here as newlyweds 56 years ago, when she was just 18. "He drug me over here!" Cassy jokes. "He had me handcuffed!"

Steve used to work as a logger, felling trees and bucking the timber into logs. Steve and Cassy also fished commercially together for many years, and raised their two sons in Meyers Chuck. "I'll tell ya, this was a great place to raise kids," Cassy says. "You stick your head out the window and whistle or yell and your kid usually says, 'OK, I'm on my way home!'"

But now, there are no more kids living in Meyers Chuck. There used to be a school, but with no kids, it's closed. 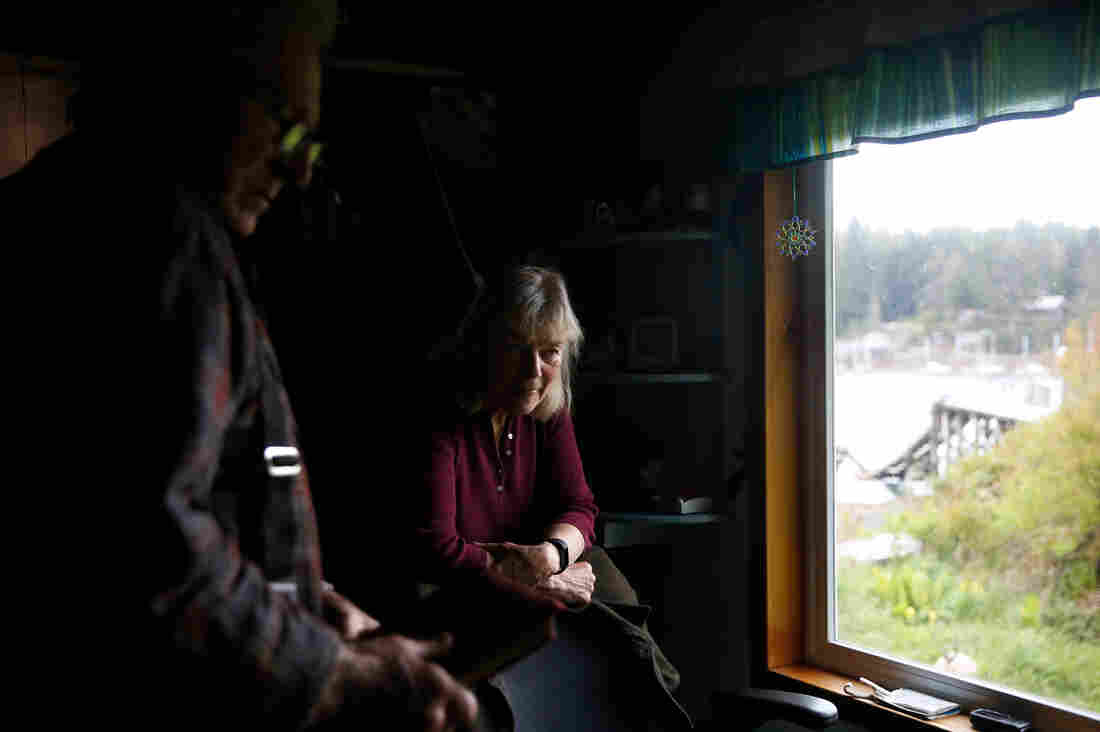 For a long time, there wasn't even a telephone here. Finally in the 1970s, Meyers Chuck got a phone. Just one.

"It was fastened to a tree," Cassy recalls. "And you'd have to stand in line to make your phone call."

If that phone happened to ring, someone – probably a kid – would run to answer it, and relay a message.

"You'd hotfoot it down the trail to whomever's house it was," says Mike Meyer, who was one of those messengers. "Tell 'em to call so and so."

Meyer grew up in Meyers Chuck, and family legend has it that one of his forebears gave the town its name. The "Chuck" part comes from a Chinook word. It means an inlet that fills at high tide.

Family photos can be found tucked away on shelves and adorning the walls in the Peaveys' home, along with the family cat. Elissa Nadworny/NPR hide caption

The people of Meyers Chuck are used to doing just about everything for themselves. Because they're off the grid, they provide their own power. The Peaveys have a little windmill that spins out on the dock; others have solar panels. Water is piped down from a lake about a mile away via a water line built by the townspeople themselves in the '80s. "Pretty darn nice," Cassy says.

In its heyday back in the 1930s, more than 100 people lived in Meyers Chuck, and the town was thriving, with a store, a barbershop, bakery, and bar.

By the time the Peaveys moved here, in 1961, it was smaller, but still humming.

"We had a little store here," Cassy recalls, "and of course the post office was here, and there was a fish-buying scow here. It was just really sweet. But it's just slowly, slowly ..." 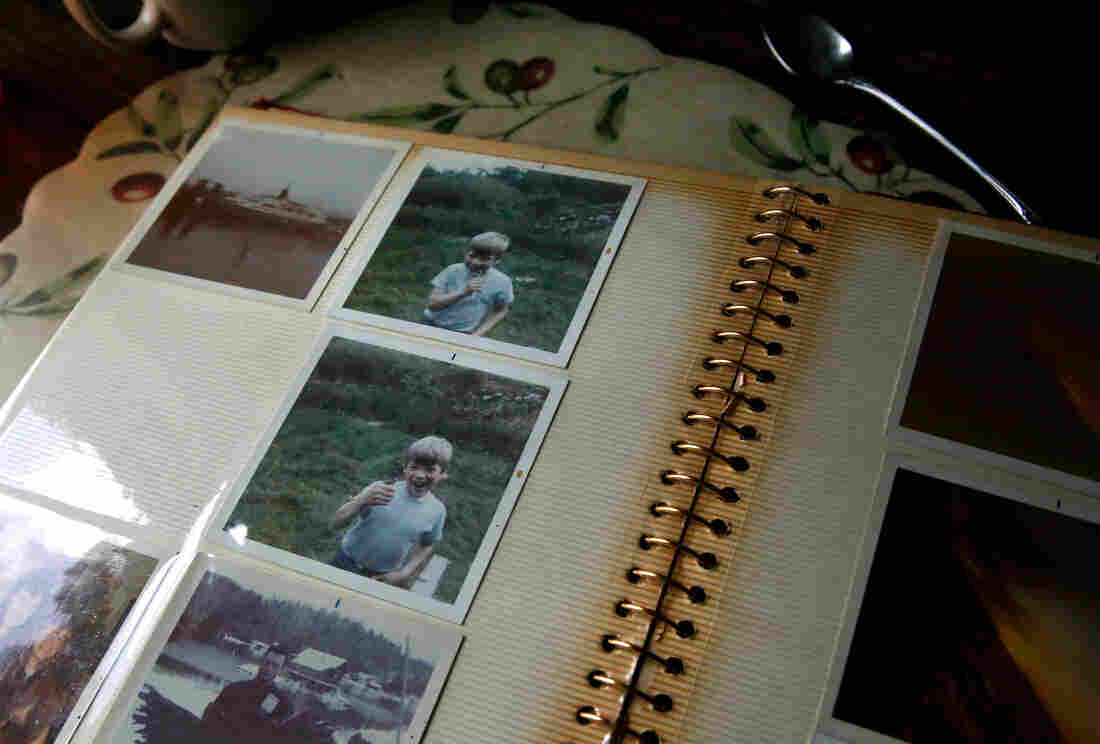 Steve flips through old photographs of their family, pausing on a set of pictures of his son pulling out his own tooth. The back of the photograph reads: the dentist. Elissa Nadworny/NPR hide caption

As much as she loves Meyers Chuck — loves that it's so small and independent — at age 74, Cassy finds herself wishing they could move away.

She'd love to spend more time with her kids, and grandkids.

"Steve isn't much of a family guy," she says. "He'd much rather just talk to the kids on the phone, and that's good enough for him. I like to have those hugs once in a while."

Cassy has talked about retiring as postmistress, but, she says, "I was told if I closed the post office it would never open again. So it kind of puts a little pressure on me. It'd be criminal to change it, the way it is now."

Steve points out that there's nobody who wants to take on the responsibility of running it. And so if the post office were to close, people would have to go by boat to get their mail over in Thorne Bay, 11 miles across Clarence Strait. "And 11 miles across the straits here would be impossible so many times in the wintertime," Cassy says.

So she figures she's pretty much stuck. 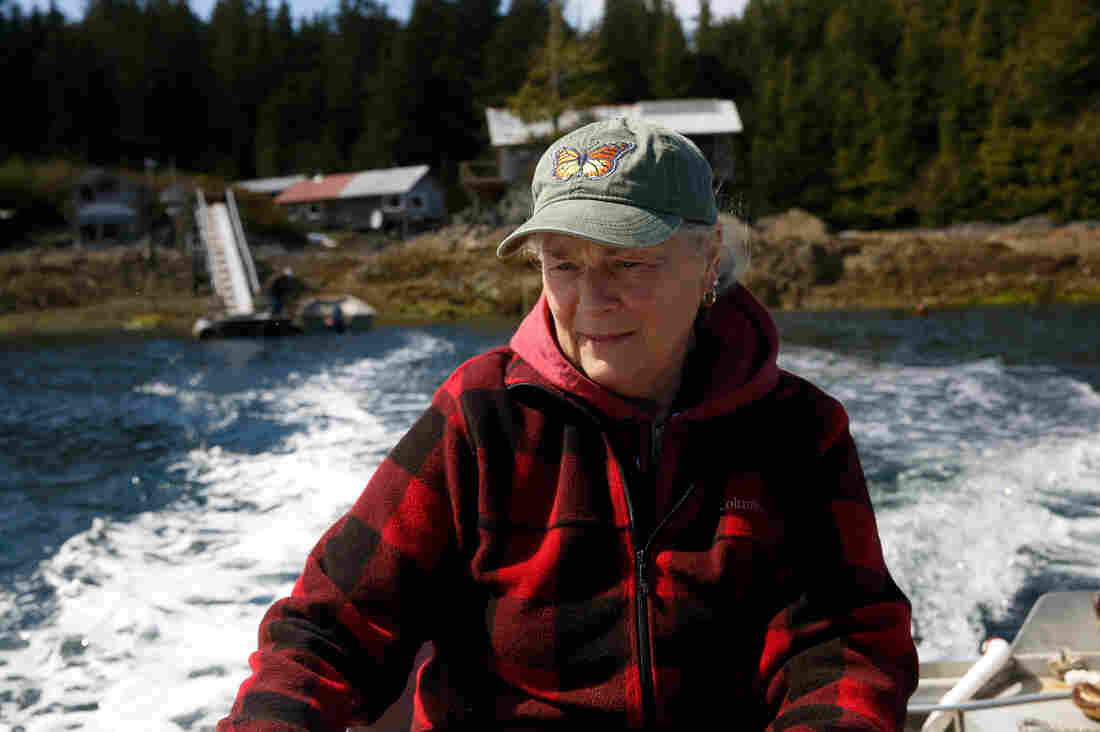 Also, she knows that Steve has absolutely no interest in ever living anywhere else.

When Steve Peavey says he can't imagine leaving this tiny place, Cassy shakes her head, and whispers, "no, no, no."

But you can tell Cassy is concerned about their future.

Steve has had a stroke that's left his left hand "pretty well devastated," as he puts it, and Cassy worries about how far they are from medical care. 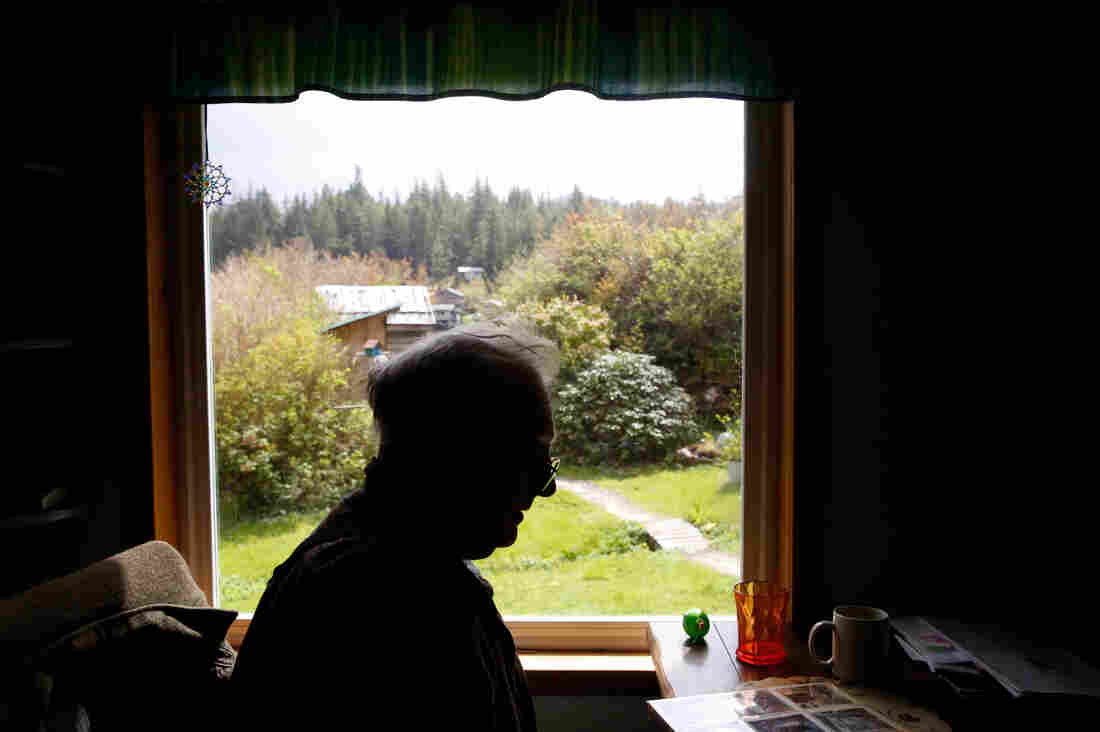 The Peaveys can't think of anyone they know who's managed to live out his life in Meyers Chuck, without having to move away eventually for health reasons.

Those questions hang over them, but right now, there are immediate things they need to tend to.

In the next few weeks, Steve Peavey plans to head out to Neets Bay, Alaska, for five straight weeks of salmon fishing on his boat, the Patsy. He fishes solo, managing it all on his own with his one good hand.

And Cassy? She'll be home. This is the busy season at the post office in Meyers Chuck. She knows the people need her there.