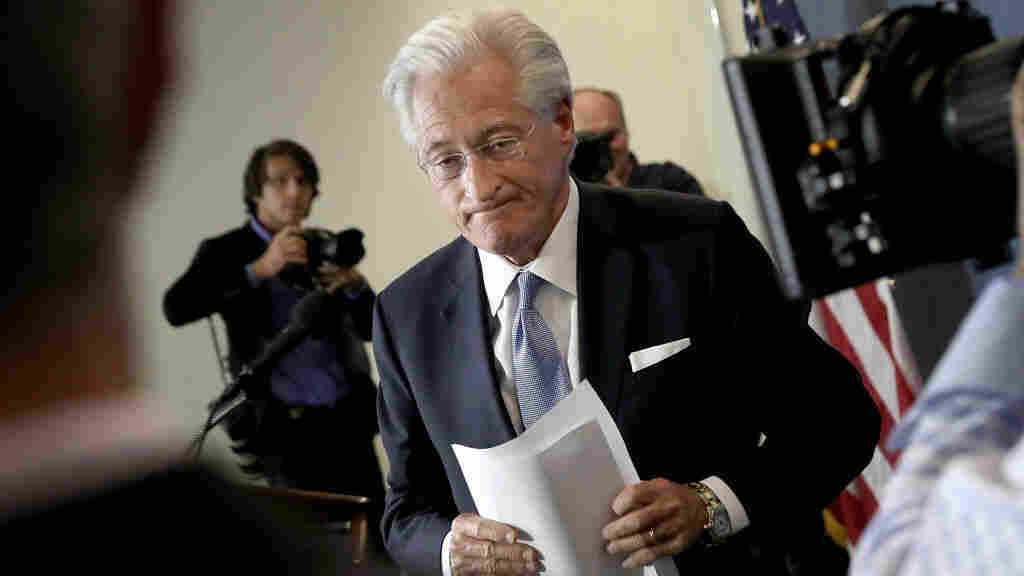 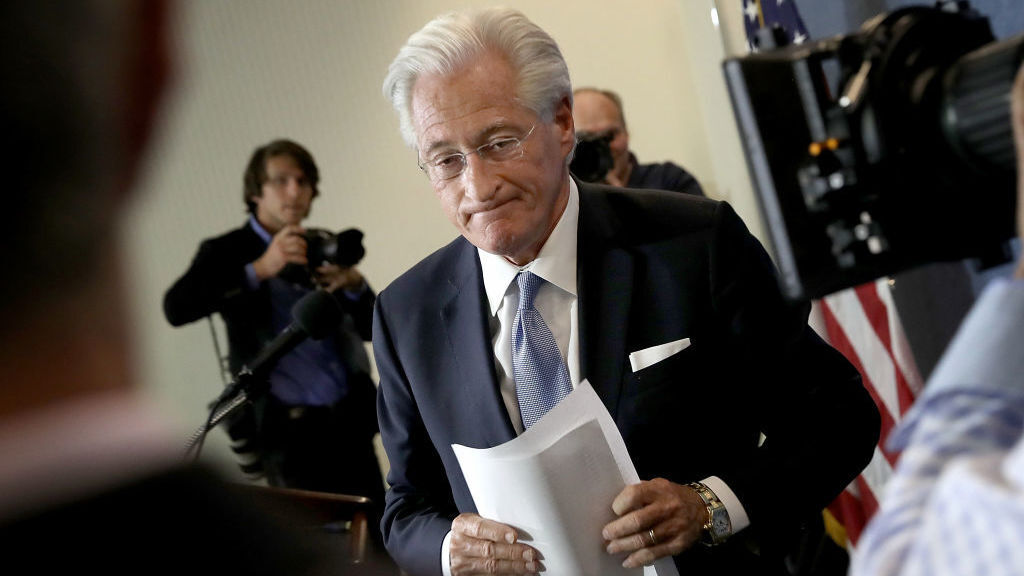 President Trump has brought on an eclectic team of outside lawyers to help him navigate the various investigations into Russian meddling in the election. At least six congressional committees are investigating. And, in addition to activities around the election, special counsel Robert Mueller is reportedly now also looking into possible obstruction of justice by the president.

If you asked a Washington insider to come up with a legal dream team for a situation like this, it's highly unlikely this is who they would come up with. But President Trump came into office as an outsider and continues to operate that way, and in a way his legal team is a reflection of that as well.

Here's an introduction to the men representing Trump:

Shortly after former FBI Director James Comey finished testifying before a Senate committee, a white-haired man in a suit walked up to a lectern at the National Press Club and faced reporters.

Kasowitz has represented Trump for 15 years in a wide range of cases related to Trump's business and personal life — and now he's leading the president's outside legal team.

"The president feels completely vindicated and is eager to continue moving forward with his agenda, with the business of this country and with this public cloud removed," Kasowitz read, then promptly left without taking questions.

He hasn't made any public remarks since.

Over the years, Kasowitz has represented Trump on real estate transactions, libel cases (Trump filed a lot of them) and in the Trump University fraud law suit, settled late last year for $25 million.

In the New York Times, he was described as "more of a scrappy upstart than a member of the city's white-shoe legal machine ... the Donald Trump of lawyering."

Kasowitz founded his own law firm in 1993, bringing with him a valuable client, Celanese Chemicals, involved in long-term product liability litigation over pipes installed in more than 6 million homes that had begun leaking. The firm started small and has grown to have some 300 lawyers, with offices in nine U.S. cities. On its website, Kasowitz Benson Torres LLP lists its primary focus as complex commercial litigation.

"He's a general, and I mean that in a very complimentary way," said Charles Barrett, an attorney at Neal & Harwell, who started his career at Kasowitz's firm. "He's very smart. He's a really good leader and great tactician. He's the one you want running point on an important operation."

That description is one Kasowitz seems to savor, as the word "toughest" appears in the first line of his bio.

Perhaps his highest profile case came just a couple of years after establishing his firm. Kasowitz represented Liggett — the smallest of the big tobacco companies. At his suggestion, Liggett broke with the industry and began settling lawsuits filed by smokers and states seeking damages for smoking-related illnesses. Up until that point the tobacco companies had been united in denying that cigarettes were addictive or dangerous.

"Today for the first time one of the five major tobacco companies in the United States is prepared to break this conspiracy," said Grant Woods, Arizona's attorney general at the time, as he announced one of the settlements. "Liggett will now fully cooperate in every sense with these 22 attorneys general as we fight the other four tobacco companies in courts across this country."

Liggett's move ultimately forced the other tobacco companies to settle, too.

Another one of Kasowitz's clients is Sberbank. As BuzzFeed has reported, Sberbank is fighting "claims that it helped a granite-mining company raid and kill off its main competitor in the Russian market."

Kasowitz's firm takes on cases other firms would shy away from — including whistleblower suits and going after big financial institutions.

But civil litigation and white-collar defense are two very different types of law.

"People who do real estate and commercial things really do not have the kind of experience that is useful when you're dealing with any prosecutor and especially somebody with the experience of Bob Mueller," said Stephen Saltzburg, a professor at the George Washington University Law School.

Saltzburg was part of the special prosecutor's team during the Iran Contra investigation, so he's seen one of these sorts of investigations from the inside. One thing Kasowitz does have going for him, Saltzburg said, is that the president knows him and respects him.

And Kasowitz has brought on other lawyers.

The face of Trump's team has become Jay Sekulow. On Sunday, he appeared on four different network and cable shows. The next day he did at least three more TV appearances. 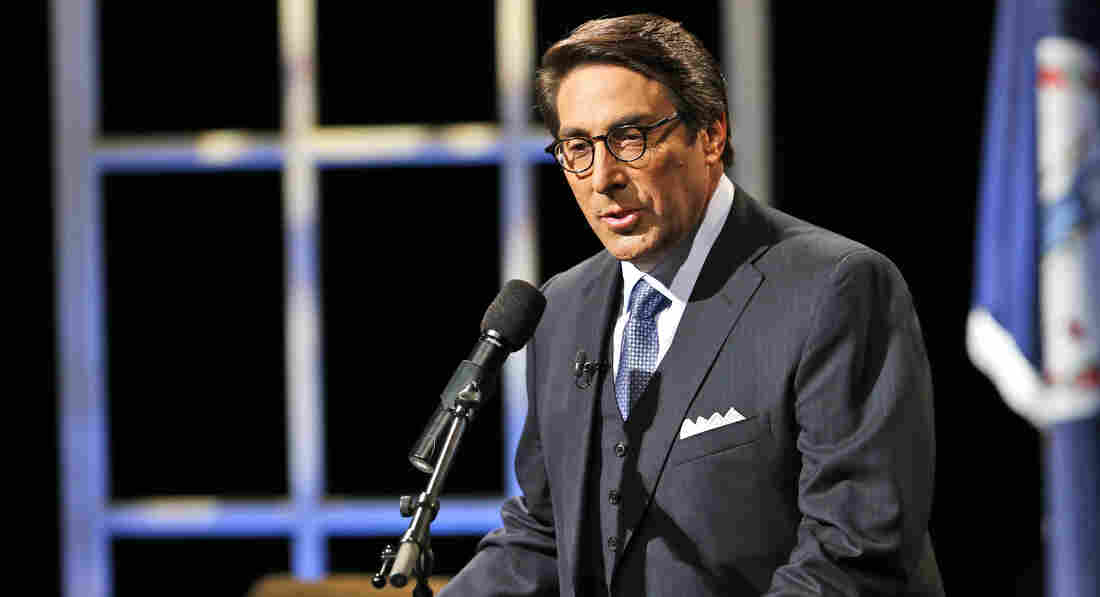 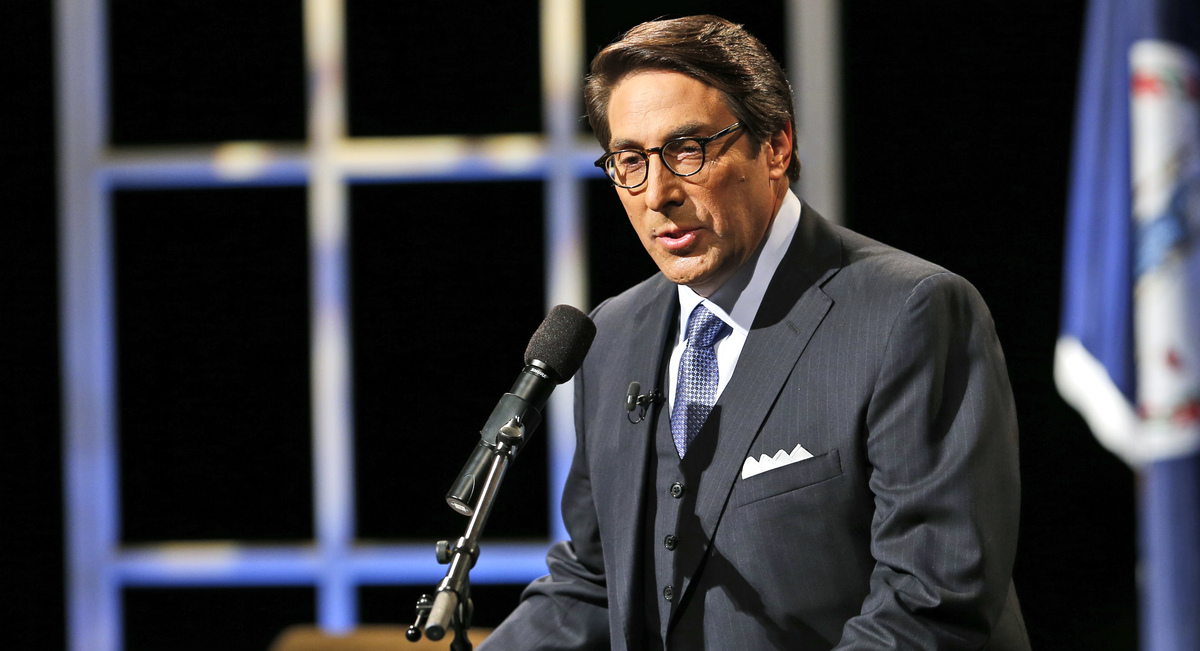 "Let me be crystal clear so you — you completely understand. We have not received nor are we aware of any investigation of the president of the United States, period," said Sekulow on Fox News Sunday.

That appearance turned south, with Sekulow getting tied up by questioning from Chris Wallace.

Sekulow later admitted he can't be sure the president isn't being looked at as part of the special counsel investigation. The Washington Post reported on June 14 that Mueller's team was looking into whether Trump obstructed justice and that investigators had reached out to national security officials for interviews.

For regular cable news viewers (like, say, President Trump), Sekulow is a familiar face. His specialty isn't white-collar defense, but rather religious liberty. He's argued 12 cases before the U.S. Supreme Court, starting in 1987 in a case that pitted the Los Angeles airport against Jews for Jesus. He argued members of the group should be able to pass out literature at the airport.

"There is no justification for a sweeping ban on First Amendment activities which would subordinate cherished First Amendment freedoms," he argued before facing a volley of questions from the justices.

Sekulow wasn't just the lawyer for Jews for Jesus. He grew up Jewish in Long Island and came to believe Jesus is the messiah while attending a Baptist college. Around that time he was introduced to Jews for Jesus.

The Supreme Court ruled unanimously in the group's favor, helping Sekulow make a name for himself.

In 1990 he founded the American Center for Law and Justice, or ACLJ, with evangelical minister Pat Robertson. ACLJ was meant to be a Christian conservative answer to the American Civil Liberties Union. Not only does ACLJ pursue religious liberty cases, it fought the building of a mosque near Ground Zero in Manhattan and even has a call-in show that airs on hundreds of stations nationwide. It's called Jay Sekulow Live! and is hosted by Sekulow and his sons. A spokesman says he plans to continue hosting the show even as he now represents Trump.

On top of all that, Sekulow plays drums in a Christian rock band, The Jay Sekulow Band. One of his bandmates was the frontman for the popular rock band Kansas in the early 1980s. On Facebook, more than 110,000 people follow the band, which has numerous slickly produced performance videos.

John Dowd is best known as the author of the Dowd Report, which led to Pete Rose's lifetime ban from baseball for gambling on the game.

"I'm very, very happy and very proud of the commissioner of baseball for protecting the game," Dowd told NPR two years ago, when Major League Baseball denied Rose's request to be reinstated. "In this day and age, protecting the integrity of anything is a big deal."

In 2011, Dowd represented Raj Rajaratnam in a major insider-trading case. Rajaratnam was convicted on all counts and walking out of the courtroom Dowd offered some choice words to a CNBC reporter, flipping off the camera. 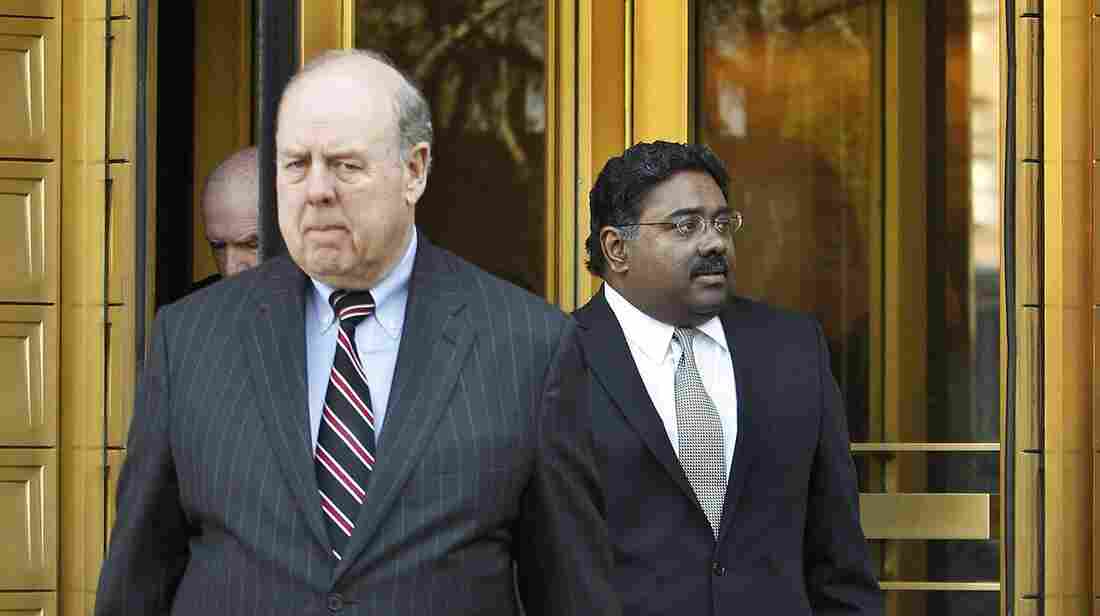 Attorney John Dowd (left), who now is part of the legal team working for Trump, leaves U.S. District Court with his client Raj Rajaratnam after jury deliberations about an insider trading case in New York in 2011. Kathy Willens/AP hide caption

But more to the point, Dowd is a seasoned Washington hand who represented Sen. John McCain, R-Ariz., in the Keating Five scandal (McCain was cleared) and helped a retired Air Force colonel get immunity to testify in the Iran Contra scandal.

That's experience that would be quite valuable if the president is in fact being investigated for obstruction of justice by the special counsel.

'The Quiet Man': The Powerful Conservative White House Lawyer In The Middle Of It All

Michael Bowe is a partner at Kasowitz's law firm and has worked on a number of high-profile cases. He went after a hedge fund that had been shorting his client Fairfax Financial. The deposition from that case played a prominent role in a Frontline documentary and also aided federal authorities in an investigation of that fund for insider trading.

His bio on the firm's website says Bowe "has successfully litigated virtually every type of high-stakes business and personal case, on both the plaintiff and defense side, and at both the trial and appellate level. He has also navigated to safety many companies and high net worth individuals facing serious law enforcement and regulatory jeopardy. And he has provided sage crisis management advice during these periods of substantial duress."