Accessibility links
Some U.S. States Relax Restrictions On Cladding Suspected In Grenfell Tower Fire Changes to building codes in some U.S. jurisdictions may allow the use of siding similar to that of Grenfell Tower in London. A fire at the apartment building killed at least 79 people last week. 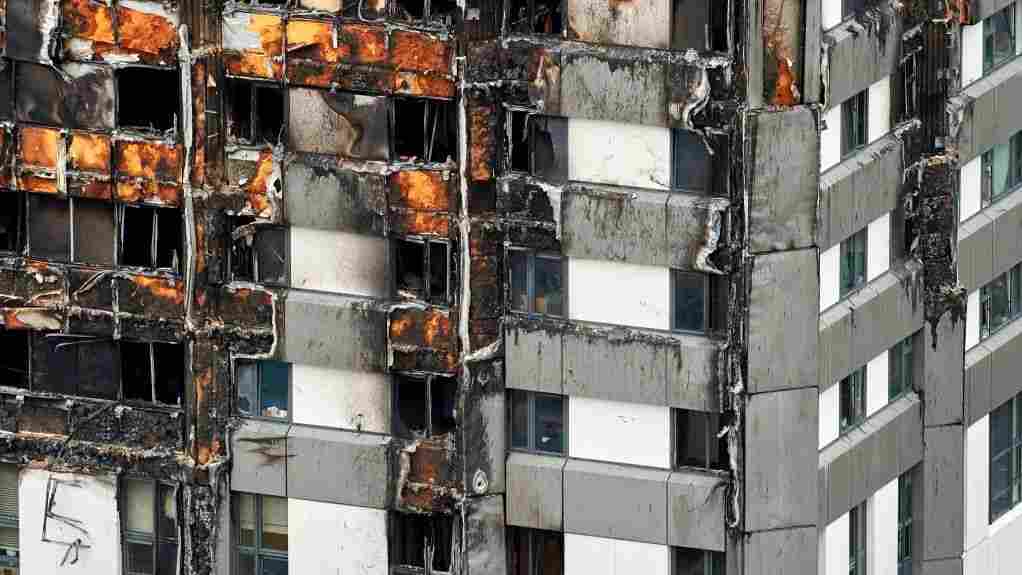 The cladding used in a 2016 refurbishing of Grenfell Tower in London helped last week's fatal fire spread. The combustible material is permitted in some parts of the U.S. Niklas Halle'n /AFP/Getty Images hide caption 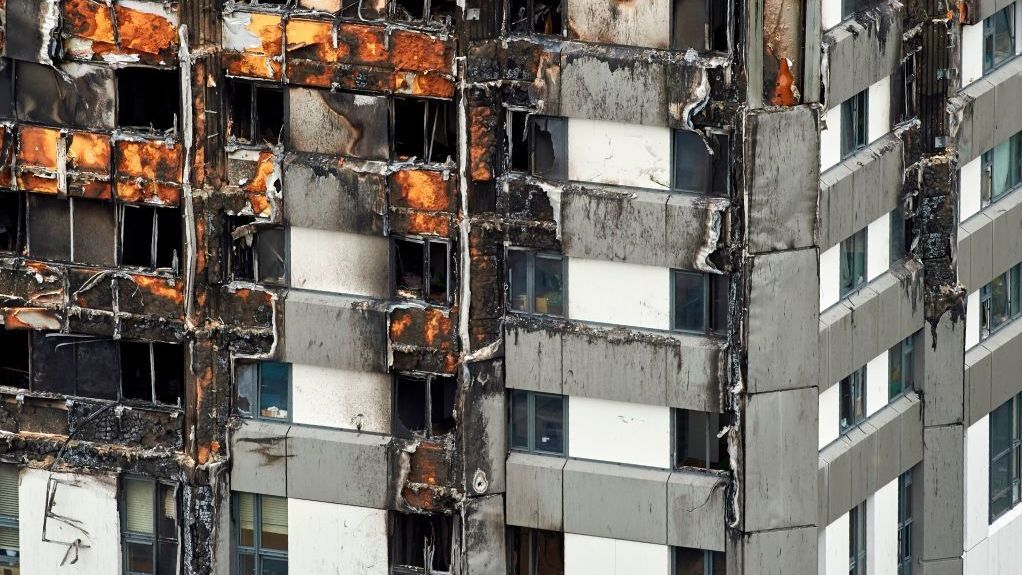 The cladding used in a 2016 refurbishing of Grenfell Tower in London helped last week's fatal fire spread. The combustible material is permitted in some parts of the U.S.

The type of siding or "cladding" used on the Grenfell Tower in London — and suspected of feeding the massive fire that killed dozens of residents — is not allowed on the exterior of tall buildings across most of the U.S.

But a few states and the District of Columbia have relaxed building codes in recent years and have started to permit the use of some cladding containing components that don't pass a fire test.

The cladding installed on Grenfell Tower as part of a 2016 refurbishing project has become a focus for investigators. NPR's Frank Langfitt has confirmed that the cladding had a combustible polyethylene core rather than a more fire-resistant mineral core.

At least 79 people died last week when the fire spread quickly through the 24-story public housing tower. Investigators say a refrigerator started the fire, which then spread to the cladding outside.

Prime Minister Theresa May told Parliament that similar cladding on other buildings has been found to be combustible. Reuters reports that at least 600 buildings in England use the same type of cladding and that authorities are testing the material to determine whether other buildings are at risk of fire.

In the United States, most jurisdictions don't allow this type of cladding for buildings higher than 40 feet. That is because they've adopted the International Building Code, which requires cladding for tall buildings to pass a rigorous test developed by the National Fire Protection Association called "NFPA 285." The purpose of the test is to ensure that installed cladding will be noncombustible.

Materials Used In London Building Under Scrutiny After Deadly Fire

Materials Used In London Building Under Scrutiny After Deadly Fire

In recent years, a few U.S. jurisdictions have eliminated this testing requirement when adopting the latest version of the International Building Code. They now permit cladding with combustible components similar to what was believed to be used on the Grenfell Tower, as long as the building has other fire safety measures in place, such as a working sprinkler system. (The Grenfell Tower reportedly did not have sprinklers.)

Valiulis wrote a report about the topic for the Fire Safe North America group. In it, he details a series of cladding fires around the world that were similar to the Grenfell Tower fire. None were in the U.S., and he says there is a good reason for that.

"The fire protection engineering profession in the U.S. is quite active and is often very proactive," says Valiulis.

Thirty years ago, when it became clear builders would start using more of this type of cladding, he says, the NFPA test was developed to determine whether combustible materials used within cladding might pose a fire danger.

But that test can be expensive — potentially costing $30,000 or more. And usually a new test must be conducted for each building because the cladding specifications change. 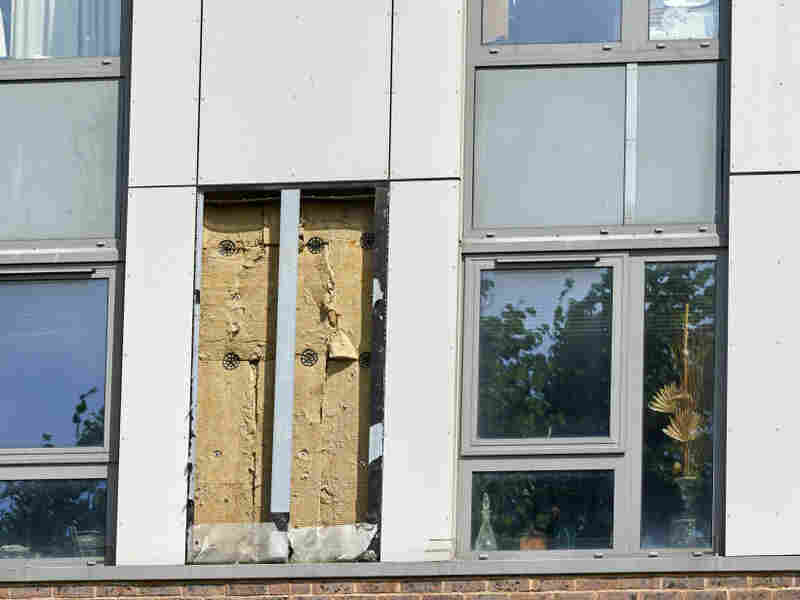 A panel of external cladding was removed from the Dorney tower block in north London. Tower blocks across England are being tested to check whether their outer coverings pose a serious fire risk following the Grenfell Tower disaster. Niklas Halle'n/AFP/Getty Images hide caption 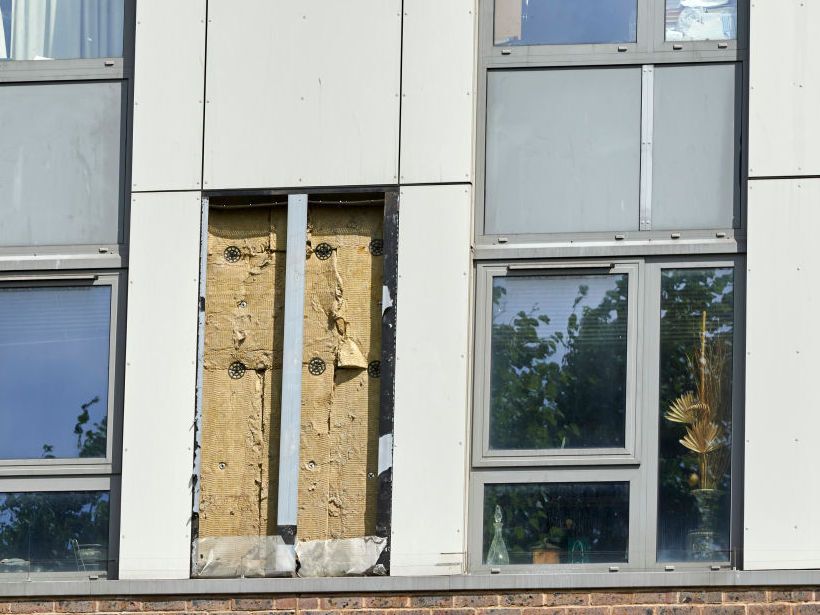 A panel of external cladding was removed from the Dorney tower block in north London. Tower blocks across England are being tested to check whether their outer coverings pose a serious fire risk following the Grenfell Tower disaster.

Cost is a primary reason the D.C. Construction Codes Coordinating Board, which is under the Department of Consumer and Regulatory Affairs, removed the testing requirement. DCRA spokesman Matt Orlins says that during a 2012 code review process, building designers said they were concerned about the difficulty of finding cladding that passed the NFPA 285 test.

"The board agreed that the concerns were valid and that other portions of the codes did provide safeguards," says Orlins. So the board eliminated the requirement.

Advocates for eliminating the NFPA 285 testing requirement have said it's a prudent cost-saving change, given the lack of dramatic fires in the United States like the Grenfell Tower fire. And they point out that most fires start inside a building, where required sprinklers are likely to keep a fire from spreading to the cladding outside.

NPR contacted firms that have pushed for code changes in the District and Minnesota, but those businesses either did not respond or declined to comment.

Valiulis doesn't accept their argument. Like most fire protection engineers, he wants multiple safety systems in place in case one fails.

"When a code is well-written and properly anticipates problems, people observe a lack of incidents, and often assume that the code must be asking for overkill," says Valiulis. But he says that also can be a sign that "the code got it exactly right."

Now, at least one of the jurisdictions that relaxed building codes may reverse course.

As more cladding options that comply with NFPA 285 have come onto the market in recent years, Orlins with the DCRA says the agency plans to put the testing requirement back into the next revision of the District's building code.

And Orlins says, "The District is also evaluating whether the change ought to be adopted as an amendment to the current code."

This article has been updated to clarify descriptions of the combustible materials allowed in the U.S.