Accessibility links
A New Delhi Family Learns To Navigate Wealth After A 'Windfall' Diksha Basu's new novel was inspired by the explosion of wealth she saw in 1990s India. She says money is a complex thing, and it takes a while for her characters to see that. 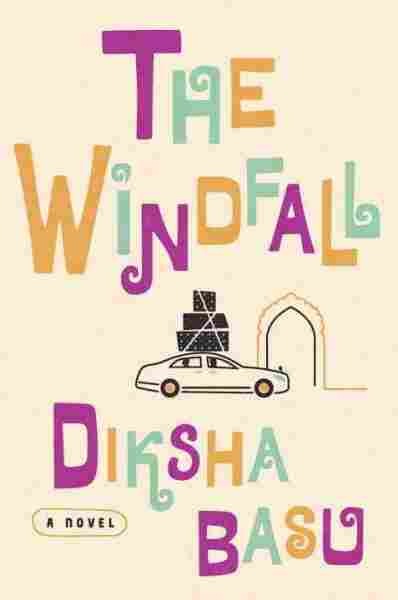 In the novel The Windfall, a newly minted tech millionaire buys a big fancy house, a flashy car and leaves his middle-class life behind to rub elbows with the superrich. What follows is a delightful comedy of errors where he and his family navigate the unexpected pressures and pleasures of newfound wealth in modern India.

The book is set in New Delhi and it follows the Jha family from the mid-1990s to present day. Author Diksha Basu says, "I myself grew up in New Delhi in the '90s and I saw the explosion of wealth all around me. And it was hard to ignore and that's what led to this novel."

On how the Jhas become superrich

The Jha family start off ... just an average middle-class, middle-aged couple, Mr. and Mrs. Jha. Their son, Rupak, is doing an M.B.A. in America and Mr. Jha suddenly comes into a large windfall of money. He sells a website — it's not money that comes from winning the lottery. He has worked hard in order to earn this money, but it comes in one lump sum as opposed to an accumulated income over a lifetime of work. So he gets this large windfall of money and decides to move him and his wife from their middle-class neighborhood to the flashy suburb of Gurgaon into a mini-mansion of their own.

On how the Jhas' new neighbors judge the couple for sending their son to study in the U.S.

For these wealthy neighbors, the fact that Rupak ... actually has to go and study is seen like something he does out of necessity, not a step toward his own success. It's looked at with sympathy that the poor fellow has to study in order to make a living for himself, whereas in their home, their son, in his late 20s, doesn't actually do anything. He plays tennis and flirts with girls and dates different women and doesn't actually work towards making anything of his own life. And that is a symbol of his parents' success, the fact that the son will never have to earn.

On Mrs. Ray, a character who ignores what her community expects of her, and the idea that women can never win

She's a young widow and she is enjoying widowhood, not that she didn't love her husband. She did. But he passed away, she's mourned, she's gotten over it. She's living her own life. She is not identified by a relationship to a man. There's no father, no husband, no son. She is living on her own. And within her society, where most of the women are identified as a relationship to a male figure, what she's doing is looked at with a lot of suspicion and often criticism.

And at the same time what I found while I was writing this book — I had just got engaged and then married. And in my circle — in my urban, elite, Indian, female circle — to get married and to have a child, which I just did, is ... sort of looked at as I shouldn't have chosen those conventional choices. And so I end up having to defend what's looked at as conventional choices, where someone like Mrs. Ray is having to defend what's looked at as unconventional choices. ... So for her not to have a man in her life is something that she almost has to apologize for; and I felt to be excited to get married was something I felt I had to apologize for. So I think at the end of the day it comes down to, no matter what we do, there's really no way to just win.

On the complexity of wealth

I don't think it is as simple as a tagline of how wealth destroys love. I don't think it does. I think it's much more complex than that. And I don't think it's as simple as, "Oh, look at the poor slum children smiling through their poverty," which is often how some literature from India is perceived. I don't think it is black and white. ... I think wealth can be destructive just as much as poverty can be destructive. And wealth can be irrelevant, and wealth can also bring a family together in a completely different and unexpected way. If it was as simple as a destructive power of wealth, I think less people would aspire to it. I think all of it is much more complex than that. And my characters fall into seeing that, and seeing that what their expectations were of wealth continuously gets challenged.