Accessibility links
'But Seriously,' Tennis Great John McEnroe Says He's Seeking 'Inner Peace' Known for his on-court outbursts, McEnroe famously yelled, "You cannot be serious!" at one official. Now, decades later, he says it's a "miracle" if he goes a full day without hearing that line. 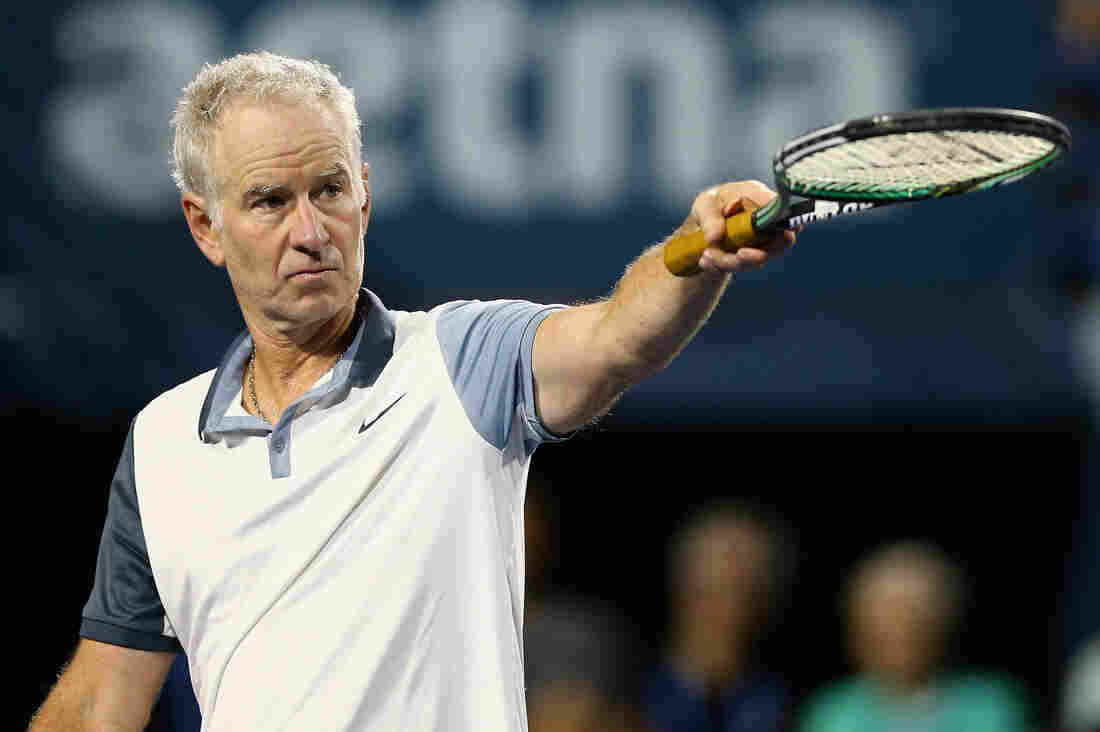 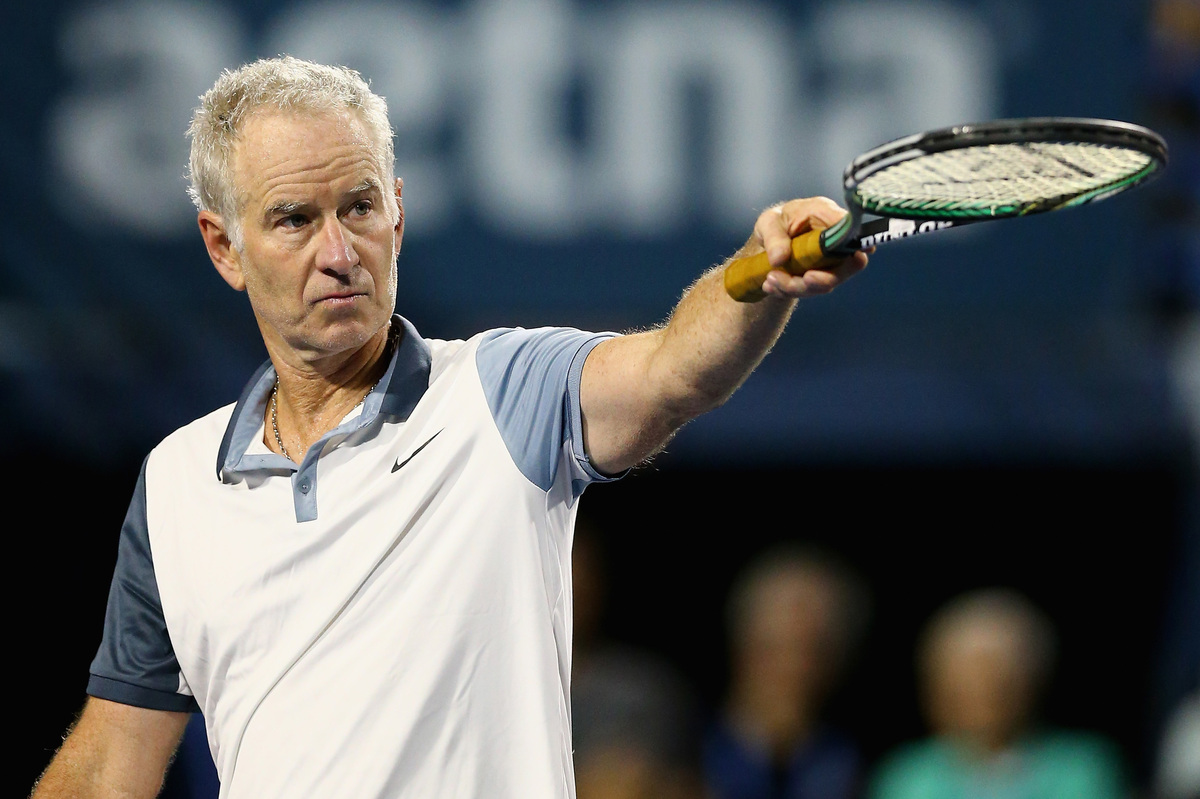 John McEnroe reacts during a Men's Legends match against Jim Courier at the Connecticut Open in August 2015.

In the late 1970s and early 1980s, tennis great John McEnroe triumphed three times at Wimbledon and four times at the U.S. Open. But all his achievements on the court did not prepare him for life off of it. After his professional career ended, he dabbled as a talk show host and as an art collector and appeared in movies and TV shows.

Above all, McEnroe wanted to be a rock guitarist in his wife's band, but, he admits: "That was not going to happen."

His wife, singer Patty Smyth, told him, "I want to play mixed doubles with you at Wimbledon." To which he replied, "Well, you don't play tennis."

And she said, "Exactly."

During his tennis career, McEnroe became known for outbursts on the court when he thought umpires had missed a call. In one classic exchange, he yelled at an official, "You cannot be serious! That ball was on the line!"

That line has followed him for decades. "If a day goes by where I don't hear that at least a couple times, it's a miracle," McEnroe says. So he has decided to embrace it: His first memoir was called You Cannot Be Serious, and his new memoir is called But Seriously.

On not taking himself too seriously

Believe it or not, I didn't take myself too seriously back then. ... Even though I'm extremely disappointed that the last seven years of my career I didn't play as well as I thought I was, or get better, or keep improving, I didn't want to quit tennis at 26 or 27. 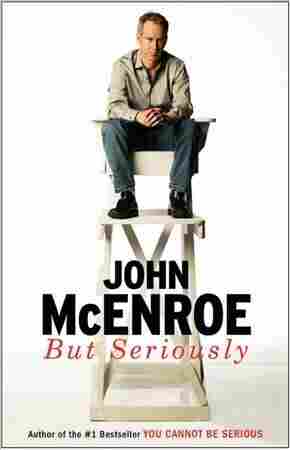 On reinventing himself after his pro career ended

I was actually going through what turned out to be a separation and divorce from my first wife, [actress Tatum O'Neal], so I was unable to really think about anything else. We had three kids together and my head was all over the place and I couldn't even think about ... the transition that I was anticipating I was going to be making. ...

I was sort of lost, but was open enough to experiment ... so that I can find myself again, which isn't easy when you've peaked in your career at 26 years old.

There's a lot of reasons, but the biggest one to me is the cost of it: the cost of play, the cost to train, the cost to get a court. All of this factors into the difficulty of getting a champion. The truth is ... the game has become more athletic than ever, and quicker, you need to be more athletic, and our best athletes mainly are playing in basketball or football. ...

If you take a court the size of a tennis court and you decide you want to use it for a soccer field, say, you could fit a lot more kids. ... When you talk about schools, they say: Well, it's better if we put a little soccer field in there and we get 20 kids running around kicking a ball. ... Whereas tennis doesn't come as easily.

Garcia-Navarro: We're talking about male players but there is of course wonderful female players. Let's talk about Serena Williams. You say she is the best female player in the world in the book.

Garcia-Navarro: Some wouldn't qualify it, some would say she's the best player in the world. Why qualify it?

McEnroe: Oh! Uh, she's not, you mean, the best player in the world, period?

Garcia-Navarro: Yeah, the best tennis player in the world. You know, why say female player?

McEnroe: Well because if she was in, if she played the men's circuit she'd be like 700 in the world.

Garcia-Navarro: You think so?

McEnroe: Yeah. That doesn't mean I don't think Serena is an incredible player. I do, but the reality of what would happen would be I think something that perhaps it'd be a little higher, perhaps it'd be a little lower. And on a given day, Serena could beat some players. I believe because she's so incredibly strong mentally that she could overcome some situations where players would choke 'cause she's been in it so many times, so many situations at Wimbledon, The U.S. Open, etc. But if she had to just play the circuit — the men's circuit — that would be an entirely different story.

Garcia-Navarro: Many people over the years, including, we should mention Donald Trump, the President, wanted you to play her, and you seemed to have at least thought about it.

McEnroe: Well I've thought about it. I didn't really want to do it, personally. I don't know, people always seemed — I would say why don't they go ask Roger Federer? Or someone, you know they added the old fart that's you know 25 years over the hill. And I think I can still play and I think I could still — I mean my kids don't think I can beat her anymore. Maybe I should get her now because she's pregnant, but the truth is that I think that sometimes --I don't know why in tennis, I get it's that one battle of the sexes when Bobby Riggs played Billie Jean.

Garcia-Navarro: Billie Jean one of the most famous, iconic and most watched, I think tennis matches at the time.

McEnroe: Yeah, it was no question. I think there was the most, the biggest attendance at the Houston Astrodome, and it was great that Billie Jean did that but...OK, but that doesn't mean, talk about other sports. If you go look at the times, for example, of the world's fastest females — and you know maybe it will change! You know my daughter, one the things she says is 'You're a feminist, Dad.' OK. I started with two boys, I got four girls now and I'm all for it and I'm trying to just get with it and figure it out.

Garcia-Navarro: So, you're a feminist.

Garcia-Navarro: You really think at 60, you could possibly beat Serena Williams? Maybe pregnant.

McEnroe: The way you put that makes me think that you have your doubts.

Garcia-Navarro: Far be it from me to question you Mr. McEnroe.

McEnroe: Well, you know, my kids do, so feel free to. But there's people that because of course as you get older — I'm not sure how athletic you are and how often you get out in whatever sport it is, but I have kept at it regularly. I've done it sort of doing this playing some other guys close to my age even though they keep getting younger and younger. Obviously, if I was going to do something like that, I would train very seriously for that to make sure my body was at, like, the peak it could be. Absolutely — to try and be as ready as I possibly could, but I bring things to the table, certainly until recently. I may be way past it, but I can still bring a few things to the table and so that's why I guess people still find it interesting to even talk about.

On where to go from here

I need to make sure that I enjoy the upcoming 10 — hopefully 20 — years of my life and just appreciate the ride that it's been, and be able to continue to ... find that inner peace, in a way, because that's difficult for me. I grew up a perfectionist getting pushed, pushed, pushed a lot. ... Especially when my dad passed away a few months ago, I said, Wait a second, you've got to just take a step back here and smell the roses a little bit more. That would be my Number One goal moving ahead.

A previous version of this story misspelled the name of tennis great Billie Jean King.