Accessibility links
Season 9 'RuPaul's Drag Race' Winner Sasha Velour Cut From A Different Fabric "I try to tune out all the drag that's out there and tap into the drag I was doing when I was a little kid — when I didn't even know the word 'queer' or that gay people were out there," Velour said. 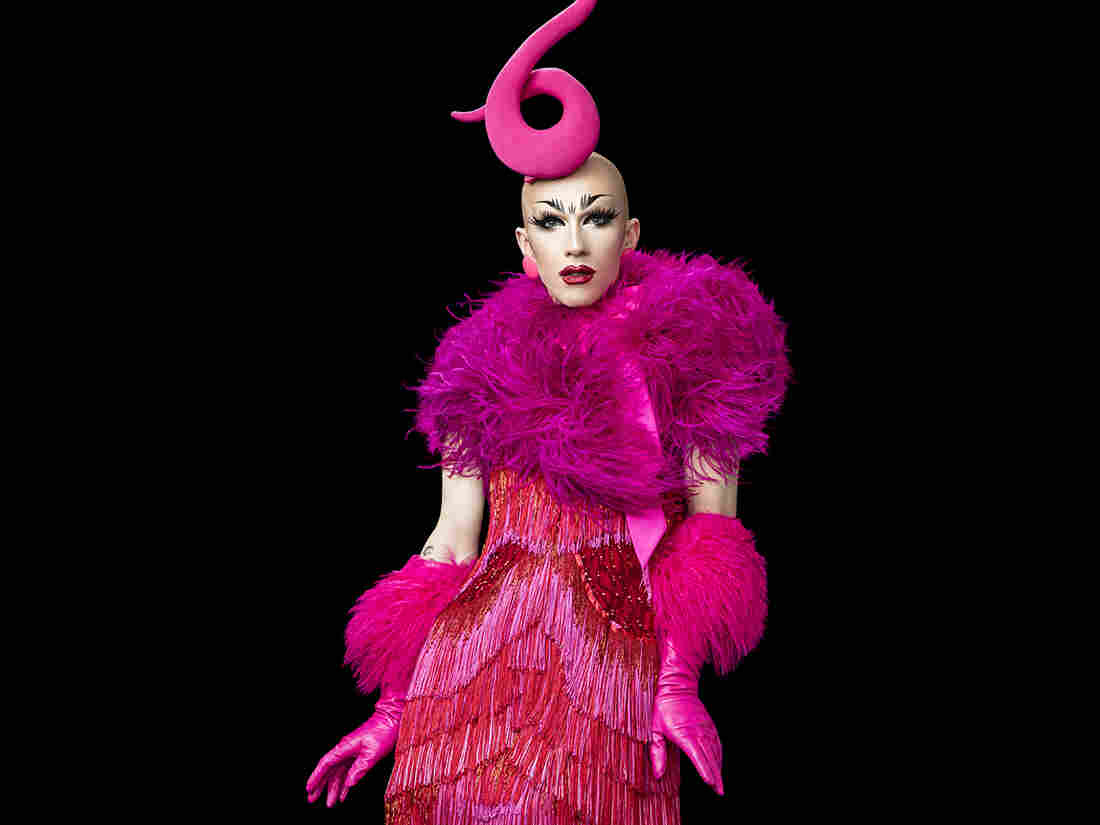 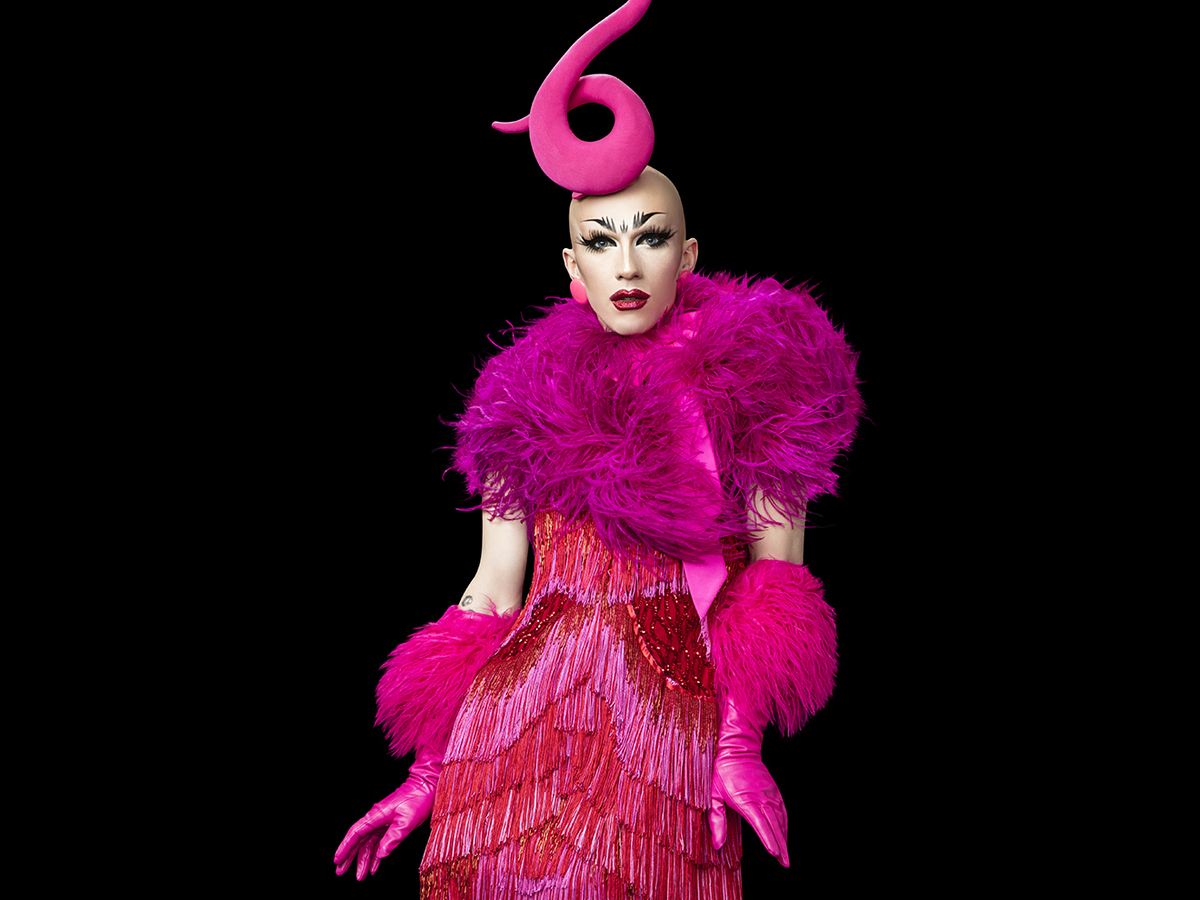 Sasha Velour, a Brooklyn drag queen known for her avant-garde style and performance, is the winner of RuPaul's Drag Race season nine.

On Friday night, a new American monarch rose to power beneath a cascade of rose petals, a cracked mask and the ballads of Whitney Houston.

But she didn't just use the glamour, comedy, acting and lip syncing prowess that fans of RuPaul's Drag Race have come to expect from America's Next Drag Superstar. Sasha Velour relies on brains.

When the 30-year-old queen is at home in Brooklyn, N.Y., she produces and stars in a monthly drag cabaret event called Nightgowns. She co-founded Velour, a magazine spotlighting lesser-known styles and issues in drag. She received an MFA from the Center for Cartoon Studies and studied political art as a Fulbright Scholar in Moscow.

She also considers herself an "amateur drag historian," acknowledging there have always been different schools of drag — all competing, warring, pushing the art in new directions.

But for Velour, her style comes from simultaneously paying tribute to the queens who came before her and blocking out any voices that might try to dictate what her drag should be.

"I want to do something that is not just a pastiche of drag that's come before, but is really authentically me," she said. "I try to tune out all the drag that's out there and tap into the drag that I was doing when I was a little kid — when I didn't even know the word 'queer' or that gay people were out there. ... Tapping into the things I've always loved and building a drag that honors those."

And now that season nine is a wrap, Velour can officially add being the ninth queen crowned on RuPaul's Drag Race to her resume — bringing her eclectic, academic and sometimes controversially intellectual brand of drag to the main stage of American queer culture.

Sasha Velour competed against 13 other drag queens in season nine of RuPaul's Drag Race to snatch the crown and a prize of $100,000. Courtesy of VH1 hide caption

Sasha Velour competed against 13 other drag queens in season nine of RuPaul's Drag Race to snatch the crown and a prize of $100,000.

"I mean, it's been one of the biggest things I've gotten pushback about, is being an intellectual and what that means," she said. "I grew up in this house of intellectuals, and for me it wasn't like a negative thing. And what I've discovered is for a lot of people it is. But I think knowing history, liking to talk about ideas — like, I just genuinely like to geek out and go on these intellectual thought journeys. I want to show people it's not elitist to be a deep thinker."

As reigning queen of the Drag Race empire, Velour said she plans to use her platform — and cash prize of $100,000 — to bring other LGBTQ artists across America into the spotlight. Over the next year, she hopes to take projects like Nightgowns and Velour magazine across the country, showcasing and connecting drag communities from America's big cities and small towns.

"I just want to be able to get kings and queens and nonbinary performers working together and having discussions about what drag is currently, what it has been and where we can move it to that is truly new," she said. "I think if we work together and have a conversation, we can really advance the art form."

Velour also plans to follow in the footsteps of other notable Drag Race alumni by dipping her toes into video production and music — albeit with an noticeably Velourian spin.

"When I was on the show, I said I will never create drag queen music. There's too much of it and it's horrible," she said. "But then they kind of tricked me into [doing] this weird, academic talk-rapping that's — it's not for everyone, but the people who love it are really into it."

The "talk-rapping" she's referring to, for the record, is in two collaborations with fellow season nine contestants — "C.L.A.T." and RuPaul's "Category Is..." remix, which was produced as a challenge on the show.

In one verse, Velour opens with: "Radical, magical, liberal art. Gender is a construct; tear it apart." Which, for her, is what the art of drag is all about — challenging gender and empowering people to follow their own paths.

"A lot of people still have the idea that drag goes from one end of the gender spectrum to the other end of the gender spectrum, and they expect drag queens to be masculine out of drag and hyper-feminine in drag," she said. "I think that portrays a lot of binary thinking and ultimately a lot of misogyny. I hope people appreciate that drag always has been more about the blurriness of gender rather than these two extremes."

"We make ourselves royals"

As Velour watched her victory Friday night as the first queen ever to be crowned on VH1, she had a moment thinking back to her childhood — before she had other LGBTQ people in her life or understood the world of gay culture.

"I imagined scrolling through channels and just discovering [Drag Race] on VH1. This, like, giant theater full of people cheering for queer people in the most glamorous, fabulous costumes — just being emotional, being angry about politics, being truly themselves. And I thought about how powerful that would be, and it was really humbling," Velour said. "That's really the message of drag in the end. We make ourselves royals."

"I hope that speaks to people and reminds them that America is full of scrappy, strange, beautiful people making magic for themselves."

The third issue of Velour comes out on July 5 and will include the contestants from season nine of RuPaul's Drag Race. It will also feature discussions on the connection between transgender politics, liberation and the drag community.

Shante, He Stays: RuPaul Reflects On Decades Of Drag — And 2 Emmy Nominations