The Anti-Trump 'Resistance' Tries To Rebuild After Stinging Georgia Loss

The Anti-Trump 'Resistance' Tries To Rebuild After Stinging Georgia Loss 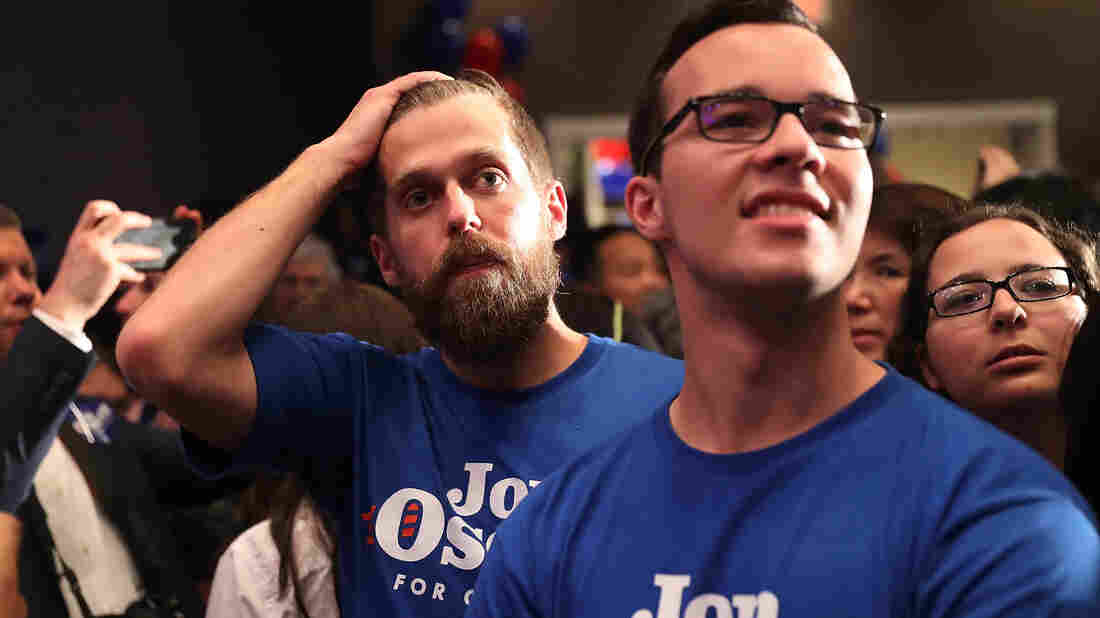 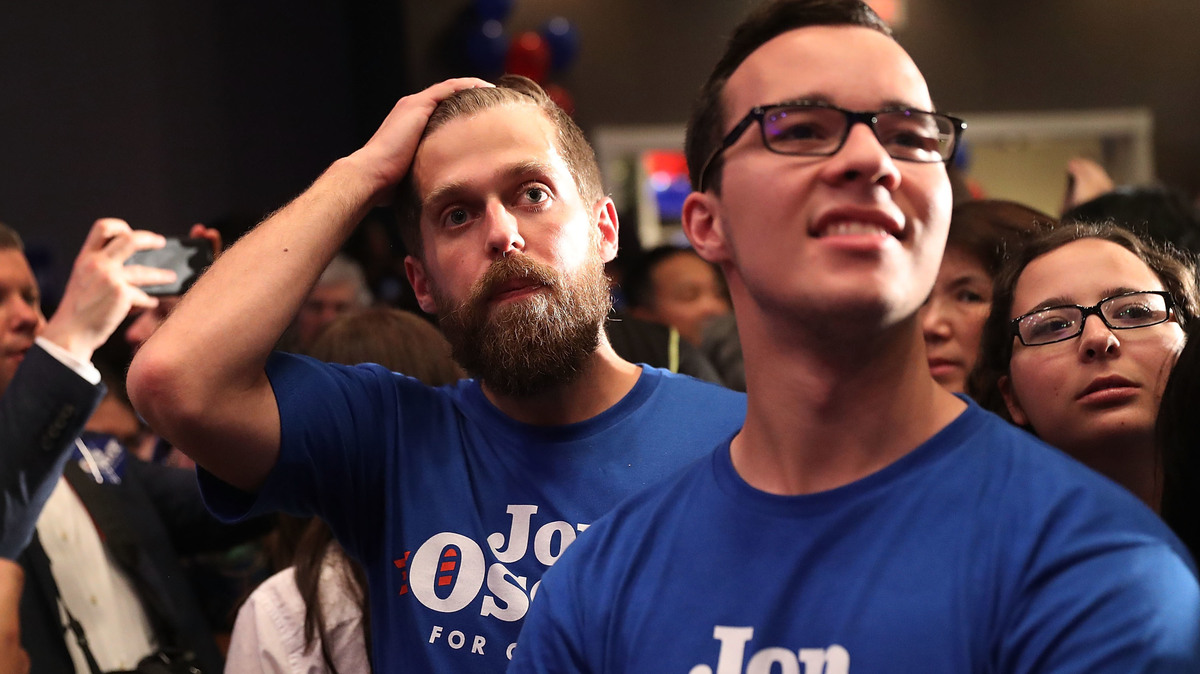 Some activists in Georgia were having flashbacks.

The 32-year-old works in the medical-device industry, but she spent the last few months also volunteering with the Georgia chapter of Indivisible, a liberal political movement that tried to boost Democratic newcomer Ossoff to a win.

"[We were] feeling pretty positive and thinking that this was actually going to happen and not only did it not happen," she said, "it was called quite early and she won by a bigger margin than I ever would have guessed."

For Ziegler, watching Tuesday night's results roll in took her back to Donald Trump's win in the 2016 presidential race.

After Georgia Win, A Triumphant Trump Returns To Campaign Trail In Iowa

Georgia's 6th Congressional District special election itself took on more significance than most would have guessed, becoming not only the most expensive House race in history but also a national proxy for the clash between Trump and the anti-Trump "resistance."

Despite their initial feelings of deflation, groups in that resistance say they are digging out and see a potential silver lining. One piece of cold comfort from the Georgia race, according to one local grass-roots group leader, is that the infrastructure built up during the campaign means Democrats won't be starting from square one in future elections.

"We're already seeing multiple Democrats launching campaigns for midterm open seats, whereas before they were uncontested," said Jen Cox, co-founder of Pave It Blue, a women's group aimed at electing Democrats in historically conservative districts. "The days of Republicans running uncontested are over, and that really is a win for us."

Georgia's Special Election Has Been Longer Than Some Countries' National Elections

For some grass-roots groups that were heavily involved in the Ossoff-Handel race, the focus now shifts to midterms. That focus will also widen out well beyond Georgia's 6th District.

"We're focused on taking back the House in 2018 for Democrats," said Ethan Todras-Whitehill, co-founder of Swing Left, a liberal group dedicated to electing Democrats. "So we have, well in advance of the Georgia 6th race, begun campaigns in 64 swing districts nationwide."

Right now, Republicans have 46 more seats in the House than Democrats do. Winning a wave of 24 more seats may seem like an impossible dream, particularly after a series of losses in five special House elections.

Georgia's race in particular showed that even the confluence of enthusiasm, anti-Trump sentiment among voters and an influx of resources — $30 million spent on Ossoff's behalf, for example — still isn't necessarily enough to win in a conservative district. Rep. Tom Price, who vacated the seat to join Trump's Cabinet, won the district by 23 points in November.

But that illustrates how unexpected it was for Democrats to even make this a close race. In fact, Democrats "overperformed the partisan lean" of the five right-leaning districts in this spring's special elections, the Cook Political Report's David Wasserman noted after the Georgia race.

"Republicans shouldn't be tempted to believe their House majority is safe," he wrote. "In fact, their majority is still very much at risk." 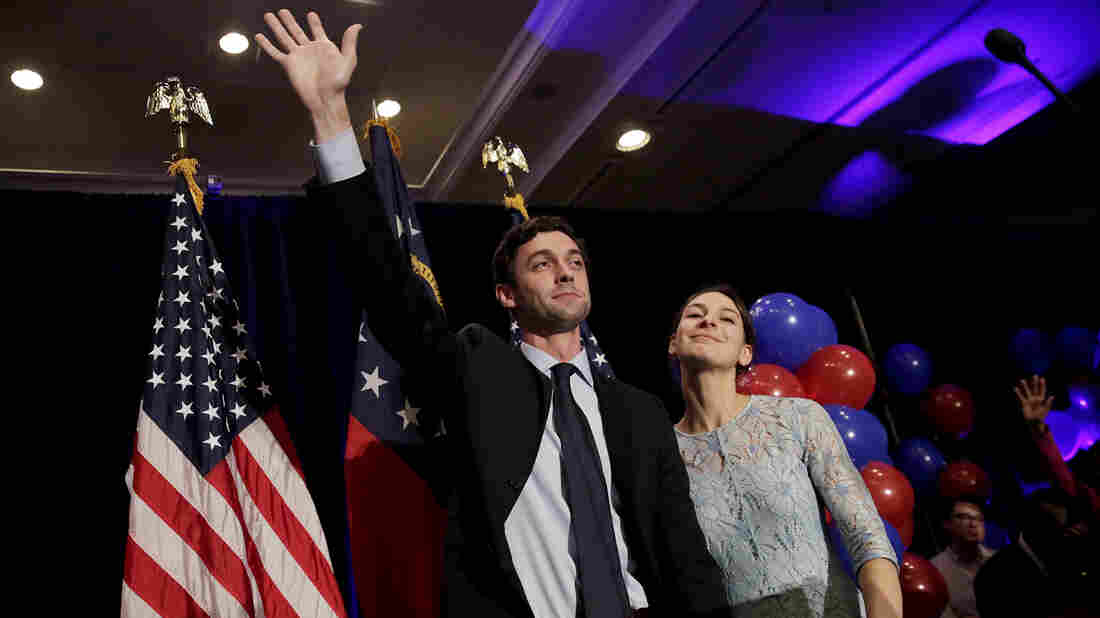 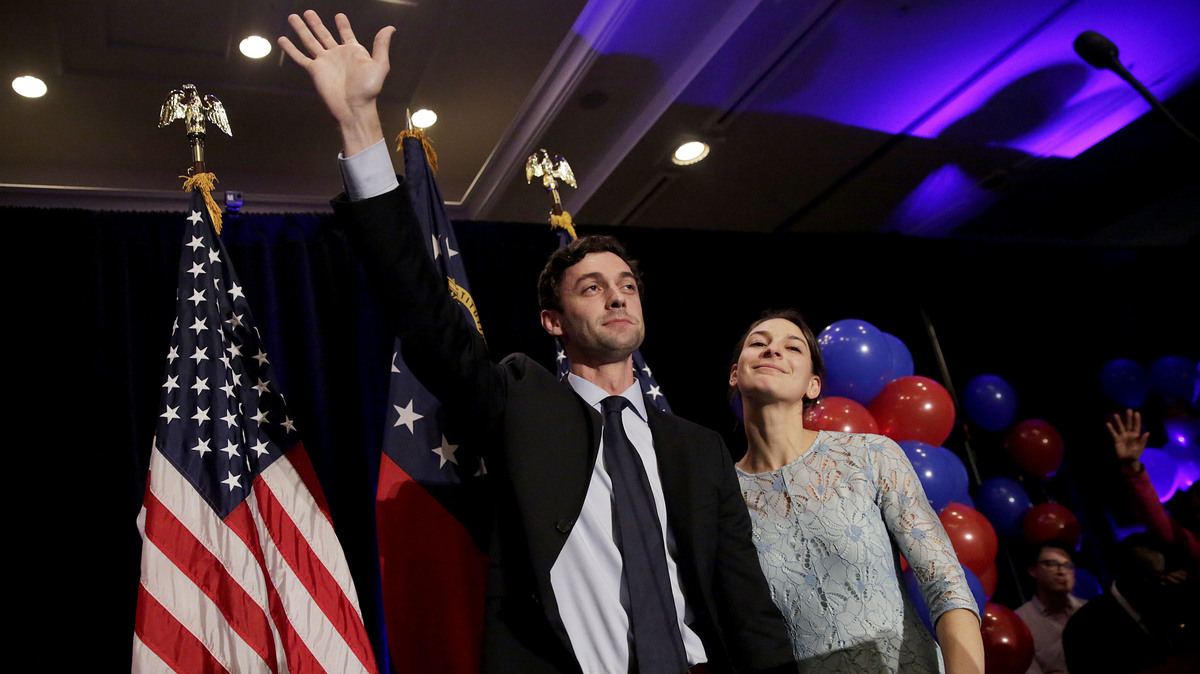 Ossoff, joined by fiancee Alisha Kramer on election night, ran a surprisingly close race in this traditionally conservative district, thanks to anti-Trump sentiment and $30 million spent.

Midterms are 16 months away, but Todras-Whitehill says his group is plenty busy already. Right now, the focus is on registering voters, getting people to pledge to vote, training volunteers and doing what he calls "deep listening" — asking voters in those districts what their particular concerns are.

His group is clearly focused on the House, but some other groups that sprouted after Trump's election have goals well beyond winning elections.

"This morning we did not get up and think about how are we going to turn the tide for 2018," said Ezra Levin, co-founder of Indivisible, the day after Georgia's election. "What we woke up this morning thinking about is Trumpcare," the name that some opponents have given to GOP attempts to repeal the Affordable Care Act, itself known as Obamacare.

Indivisible claims 5,900 local groups nationwide. They consider themselves "progressive," which Levin stressed is not necessarily synonymous with "Democratic": "We are not an arm of the Democratic party. We don't coordinate with the Democratic party." He pointed out that some Indivisible members protested against Democratic senators who voted to confirm Mike Pompeo's nomination to be director of the Central Intelligence Agency.

Aside from trying to elect Democrats and fighting Donald Trump's agenda, Indivisible also says it plans to work against gerrymandering. Some local chapters are calling representatives and collecting signatures on state redistricting initiatives.

Those are the game plans as outlined from a national level, but on a local level, groups are considering the particulars of their own districts. Activists in Georgia's 6th District are learning what they can from the special election.

For example, both Cox and Zeigler, with the local Indivisible group, said the election proved how powerful a political force women can be.

"In this area, yes, the effort is absolutely led by women," Zeigler said. "I do think that there's a lot of skills or life skills that women are transferring to activism. We are already the communicators in the community, right? We're the ones on PTAs and neighborhood organizing. It's largely women. So I think that that network is already there."

One of Cox's main lessons learned from this election is that building community among Democrats is important in a red district because they may not know that other like-minded people exist. To her, holding events where local Democrats can get to know one another can go further than simply assigning volunteers to phone banks and canvassing areas.

And some of the lessons learned were more concrete. Zeigler, for example, learned that typical outreach techniques — knocking on doors and setting up phone banks — aren't always great for reaching young voters.

"When you knock on the door of a 19-year old-target, you're almost guaranteed to be greeted by their Republican parents, at least in this district," she said. "It was a real problem. I think we probably mobilized Republicans who may not have been that motivated to vote."

Cox believes that the race showed one benefit of grass-roots groups: They can be nimble compared with the larger party apparatus.

"We were moving fast, and by the time the jungle primary was over and the Dems could finally get behind one candidate, we already had our game plan," she said. "I think that was what helped Pave It Blue galvanize so quickly — no red tape. But I think they are paying attention to grass-roots groups like ours and we hope to be part of changing the game on that front." 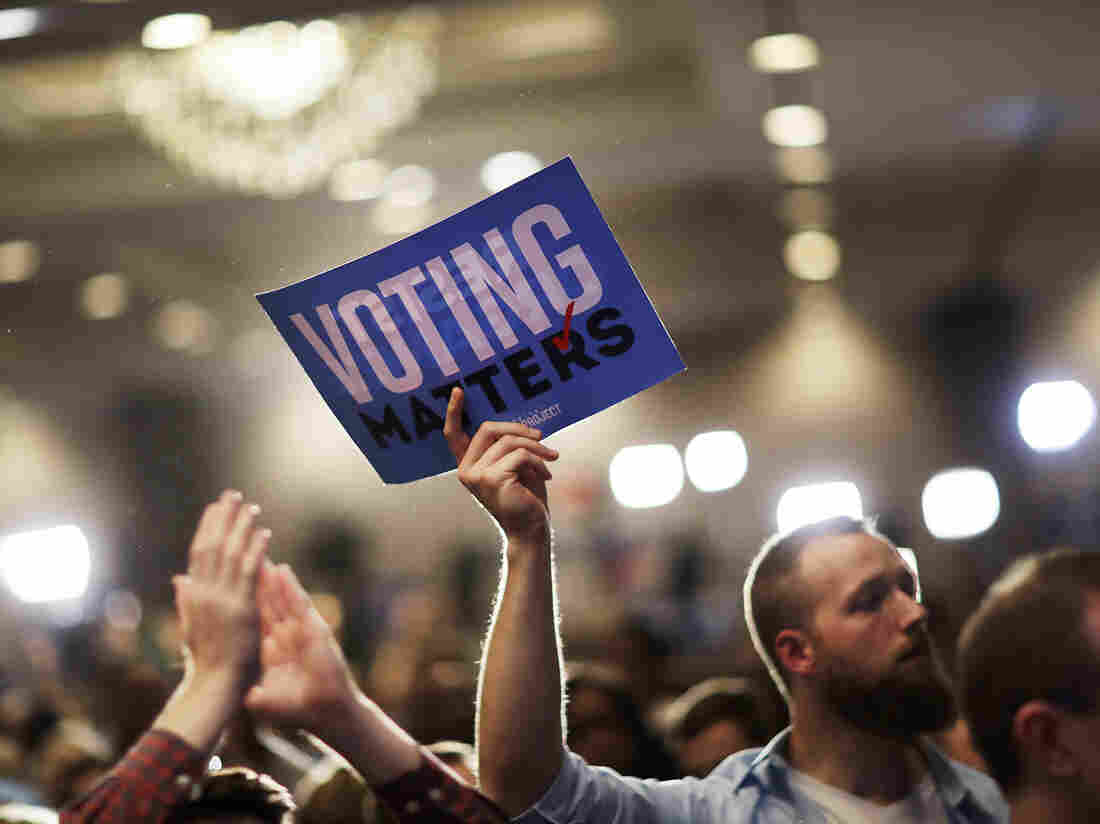 Despite Ossoff's loss, local activists think that the infrastructure set up and enthusiasm shown for the nationally watched race will allow Democrats to get an early start on the 2018 midterms. David Goldman/AP hide caption 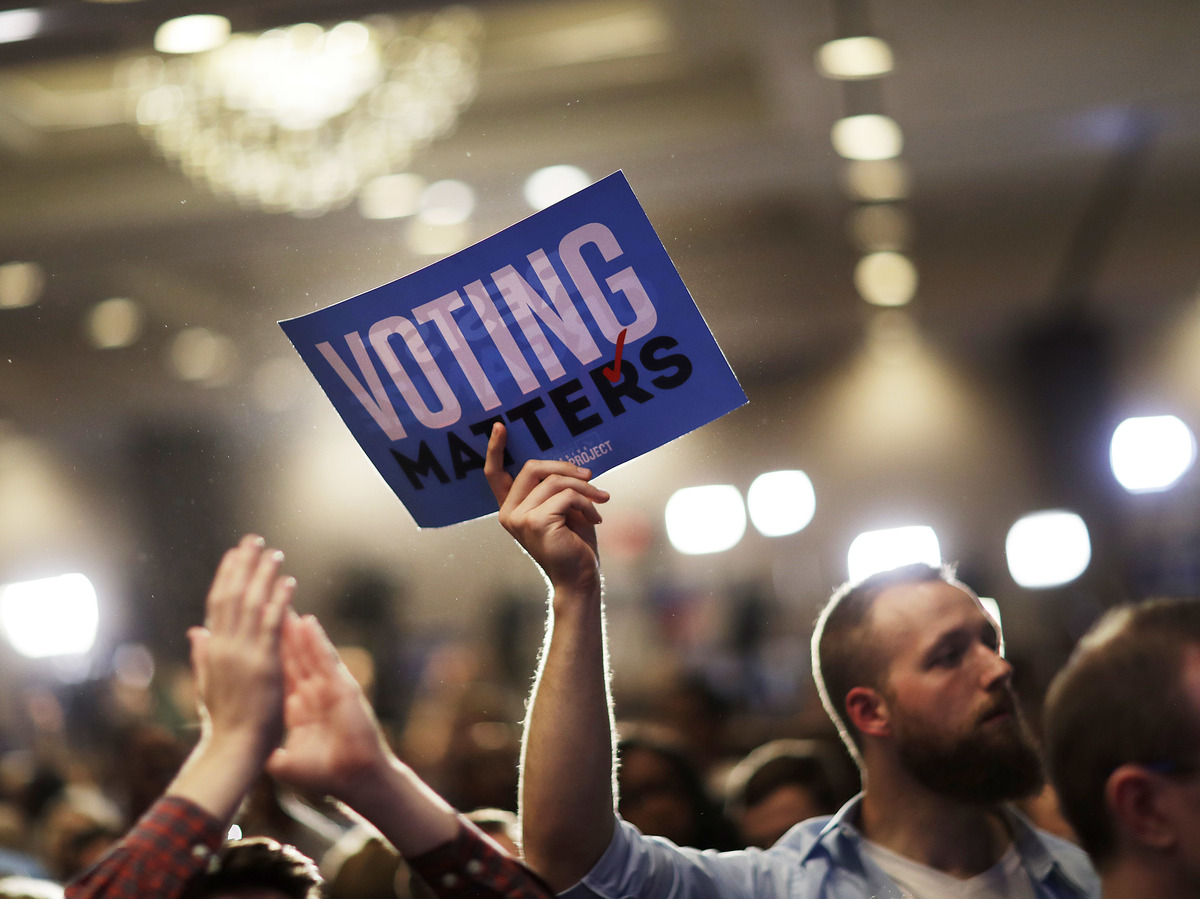 Despite Ossoff's loss, local activists think that the infrastructure set up and enthusiasm shown for the nationally watched race will allow Democrats to get an early start on the 2018 midterms.

While Cox is optimistic about working with the Democratic Party in the future, not all activists are so positive.

Zeigler and local Indivisible group co-founder Amy Nosek felt they didn't see eye to eye with the national party. The two women told NPR that they believe the national party got involved in the Georgia race too late (there are rules limiting party involvement in the "jungle primary") and that when the Democratic Congressional Campaign Committee did get involved in the district, it didn't listen to their group enough on issues such as where to canvass.

"The Democratic Party to me was not present in this race and didn't need to be," Zeigler said. "It was local volunteers who knew their communities, working directly with the campaign."

The DCCC disagrees with that assessment, however. A spokesperson pointed NPR to a memo listing the group's investments in the district, including field workers and millions of dollars in ads.

"This was not a race that we lost because of resources," said Cobb County Democrats Chair Michael Owens. "This race was lost because it's going to take a little more time to win this district."

"By and large, the grass-roots organizations were indispensable in helping us to do as well as we did," he added. 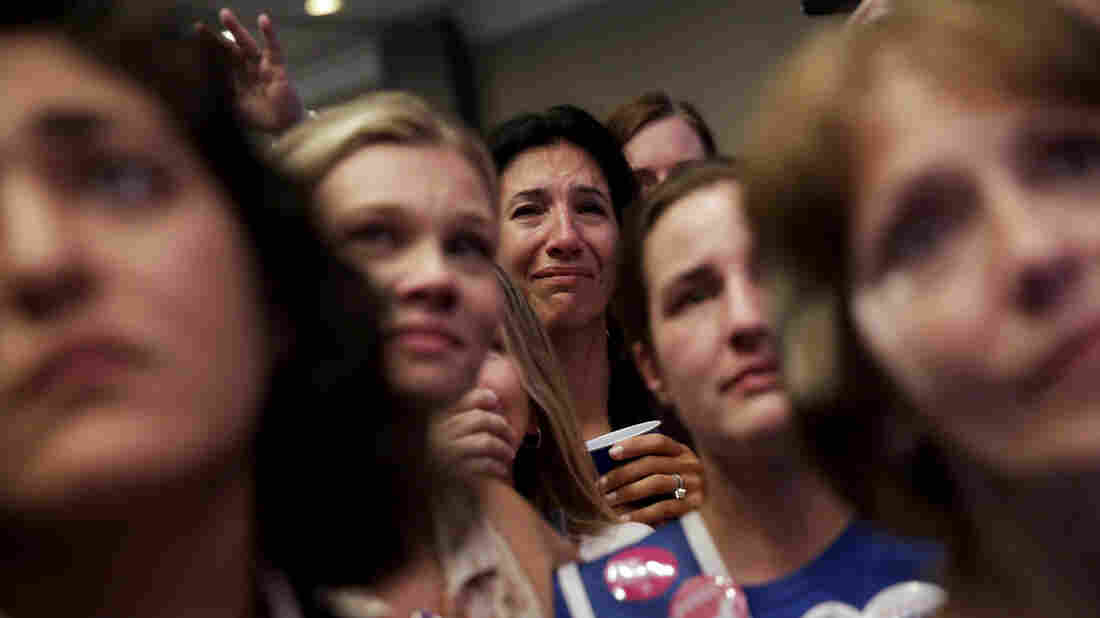 Disappointed Ossoff supporters say the race has already inspired Democrats to reach out to grass-roots groups and start making plans to take control of the House in 2018. David Goldman/AP hide caption 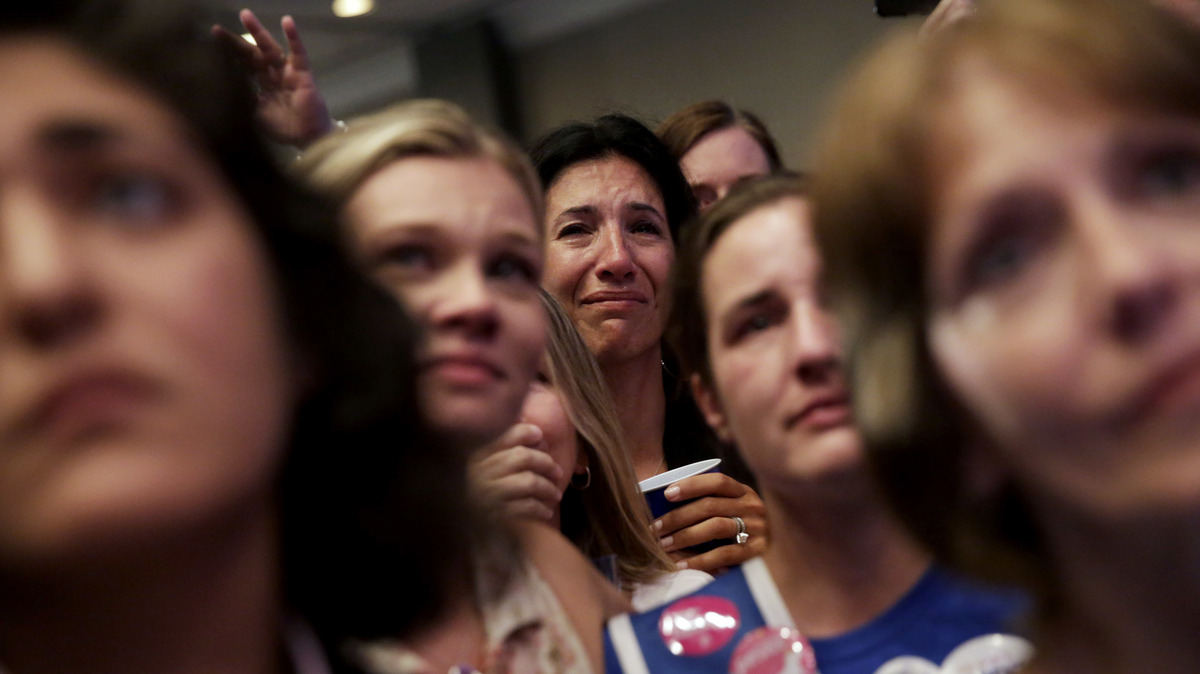 Disappointed Ossoff supporters say the race has already inspired Democrats to reach out to grass-roots groups and start making plans to take control of the House in 2018.

Despite a disappointing loss, groups like Pave It Blue are still proud of their performance and want to spread their new knowledge to other districts.

"We need a minute to catch our breath and get our legs under ourselves organizationally and structurally so that we can help people to form kits and templates and put it out there to the rest of the country so that they can understand what worked for us," Cox said. "And what really worked for us is to build the community."

And that community could be getting much larger. Leaders of anti-Trump groups say that the loss, plus the knowledge of that progress, has been more emboldening than discouraging.

The national group Run for Something, which encourages younger adults to run for office, claimed a modest surge in interest after last Tuesday night's special elections in Georgia and South Carolina. The group said it had 14 people express interest in running for office on Tuesday — about their average daily level of interest — but that between 7 and midnight on Tuesday, 17 more potential candidates reached out and then 13 more on Wednesday morning.

Pave It Blue and Indivisible Georgia are likewise seeing a surge in enthusiasm.

"The number of people who want to join Pave it Blue this morning is huge," Cox said the day after Handel's victor.

"I hadn't even gotten out of bed yet, and I had 35 messages about organizing and database feedback forms and strategy planning," Zeigler told NPR last Wednesday. "I thought we were going to take a nap today, and I guess not."