Accessibility links
Book Review: 'The Child' By Fiona Barton Fiona Barton's latest — a followup to last year's hit The Widow — picks up with journalist Kate Waters as she digs into another cold case, this one an infant skeleton found at a building site. 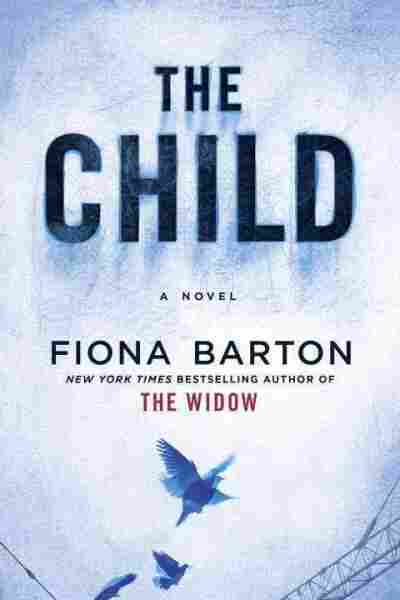 Some books tell you a great deal, while other books show even more. I'm happy to report that Fiona Barton's second novel, The Child, falls firmly into the second camp. That's not because of the usual "show, don't tell" dictum that so many novelists hear from instructors, but because Barton has a reason to keep readers firmly in the action. More on that shortly.

Like her 2016 smash-hit The Widow, Barton's new book centers on a cold case involving a little one. This time, and it's no spoiler to say so, the "child" is a newborn's skeleton, discovered at a building site in London. Kate Waters, the newspaper journalist who plied her wits against a canny murderer in the first book, is back and looking for something, anything, to impress her boss, Terry. When she sees a small mention of the skeleton's find, she convinces Terry to allow her out of the office to make some inquiries. Although he saddles her with a young male intern, Terry, like Kate, thinks this find might be a big story.

Also like The Widow, The Child is told from several perspectives — in this case, Kate's, a grieving mother named Angela, and a younger wife named Emma who is afflicted with terrible anxiety. Kate is looking for a story. Angela is looking for closure. Emma isn't sure what she's looking for, but she knows the answer lies in her past as the daughter of a single mother named Jude. All three women have reasons to be interested in the "building-site baby," as it comes to be known.

Lies We Tell Ourselves Propel 'The Widow'

Barton moves the story along with the same alacrity she used for The Widow, a method that works particularly well for this slightly quieter book. There's never a moment when the reader sits back on her heels and thinks, "Well, that might not matter" or "Forget it, it'll never work." You're in medias res with Kate, Angela, and Emma, and the spliced action-narration is an excellent way of reminding you that no crime affects just one person, and each person it affects has many other people in her life. The frequent, fast chapters (86 of them!) highlight all of those people and their daily routines.

However, more important — at least to Barton — is the idea of shoe-leather investigative reporting and how it can transform the lives it affects. As the book opens, things are grim at Kate's paper. While the newsroom is still full, most of its cubicles are filled, not with journalists, but with very young workers trolling the Internet for potential clickbait. "The Editor's focus had moved increasingly from investigative journalism to the sort of instant news that got the online community clicking and commenting. [Kate] now found herself evermore redundant in this new world order."

There's never a moment when the reader sits back on her heels and thinks, 'Well, that might not matter. or 'Forget it, it'll never work.'

Kate, however, won't be made redundant in her own mind, which still clicks and whirrs as fast or faster than her colleagues' browsers. Her professionalism, experience, and self-awareness make her highly sympathetic to readers, and they should — Barton, long a professional journalist herself, knows all of the tricks of Kate's trade. She also knows the limits of those tricks: This is a case that will be solved by hard science.

Even so, no one in The Child would have reached any scientific conclusions if Kate Waters hadn't been around to push them in the right direction. As she smiles, cajoles, and sticks her well-shod foot in various doors, Kate remembers her limits: Her ex-Fleet Street boss had once ordered her to take a camera into a hospital to take a photograph of a famous patient. "She hadn't done the sneaky hospital bed photographs ... She'd taken a photo of her coat and pretended the camera had gone wrong ... But it didn't matter who'd done what anymore. They were all guilty as far as the public was concerned, and they all had to face the reckoning."

The Child isn't a book about journalism — any more than The Girl on the Train is a book about alcoholism, or Harry Potter and the Philosopher's Stone is a book about being an orphan. Like her fellow novelists, Fiona Barton knows showing is better than telling because it allows for the reader's perspective. When the stories from Angela and Emma converge, whether the conclusion occasions a shock or an "aha!" doesn't matter; it's satisfying due to all the work that's gone into its discovery.