Accessibility links
Book Review: 'Off The Cliff,' By Becky Aikman Becky Aikman's new book is a fierce, funny chronicle of the making of Thelma & Louise — the Hollywood forces arrayed against it, and the effect it had on the industry on both sides of the camera.

How Thelma & Louise Drove Hollywood 'Off The Cliff'

How Thelma & Louise Drove Hollywood 'Off The Cliff' 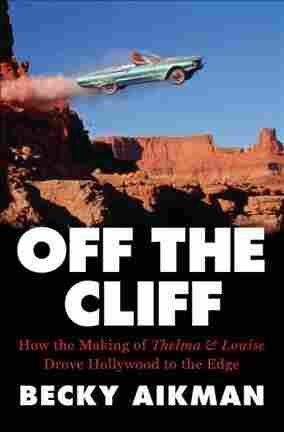 How the Making of Thelma & Louise Drove Hollywood to the Edge

It's the least surprising thing in the world that a nameless Hollywood executive had this reaction to Callie Khouri's script for Thelma & Louise. It could be a line from the movie itself — there's no shortage of men with that attitude. (Thelma and Louise pull one of them over and blow up his truck.) It's more surprising that, in a town where million-dollar business is shaped by such opinions, the movie ever got made.

Becky Aikman's Off the Cliff is subtitled How the Making of Thelma & Louise Drove Hollywood to the Edge. That sounds like hyperbole, except that this book crackles with frustration on all sides. Khouri bristled at the workplace chauvinism in music videos (which inspired her to write a script about fighting back); Geena Davis and Susan Sarandon were fed up with Hollywood misogyny; Ridley Scott bristled that Khouri didn't fully trust him with her script; the marketing department panicked at selling a two-woman film that begins as a weekend romp and ends with its vigilante heroines driving into the Grand Canyon.

Aikman carefully chronicles the minutiae of production for curious readers. There's casting near-misses (George Clooney nearly swept Thelma off her feet), the woes of set decoration (Bring Your Own Tumbleweeds), technical nitpicks about lighting, and the logistics of sending a car off a cliff. It's always fascinating to read about the combination of intensive planning and happy accidents behind any movie, and Aikman has done the legwork — nearly every stage of the process, from script agent to editor, is accounted for. At first it feels a bit rose-colored, and Aikman seems more interested in the process than in deconstructing the product. There's relatively little about the film's legacy: whether the film is feminist, whether it meant to be, whether it matters.

... in 'Off the Cliff,' you get the sense that Aikman isn't just taking note of the feminist ire at the heart of this movie: She's out to show how much of a fight it really was.

However, while easy answers aren't required, there's no way to talk about Thelma & Louise without talking about those things. And in Off the Cliff, you get the sense that Aikman isn't just taking note of the feminist ire at the heart of this movie: She's out to show how much of a fight it really was.

The men in the book seem determined to help. To be clear, a host of men championed the movie — producer Alan Ladd, director Ridley Scott, editor Thom Noble. But Aikman collects some doozies from her subjects. Khouri's ex-husband David Warfield gives her the rousing endorsement, "She could play pool with the boys ... Her attitude was essentially professional. She's not so fragile that she can't be around dancing bimbos" — a short but sweet summation of what "professional" means in showbiz.

That feeling pervades the book; there are dozens of cringeworthy asides from industry women, and the way Khouri, Davis, and Sarandon talk about each other sits at an interesting angle alongside the ways the men speak about women. Harvey Keitel saw a movie about "[women's] difficulties, our difficulties as men, what we have to confront within each other and within ourselves." Madsen and Sarandon argued against an over-the-top lovey-dovey scene between his character, Jimmy, and rape survivor Louise; Madsen says: "Because I'm a heterosexual male, and I know a little bit about women ... I don't think that Louise would have anything to do with anybody who wasn't a little volatile," he explains. Ridley Scott suggested to Davis on set that Thelma might celebrate freedom by taking her top off.

Honestly, despite plenty of on-the-ground trivia, the real story here is less the minutiae of movie production than it is these Hollywood habits — and the Thelma & Louise effect behind the camera. During the callback for the drifter whose hair-dryer monologue launched a career, Davis was "waiting to be asked to weigh in. What, she thought, would Susan Sarandon have said in this situation? She knew: Why are you not asking me what I thought?" She spoke up, and they cast Brad Pitt on her recommendation; later, their love scene reached Ozymandias levels of mythology among the production team.

But amid the frustration, there's also illuminating introspection. Aikman crafts a narrative of Thelma & Louise bringing out everyone's most introspective instincts — and their fighting spirit. Even amid the friction (Khouri and Scott in particular butted heads), Aikman assures us it was because everyone was so invested in a project they felt was important.

Everyone was right; 25 years later, Thelma & Louise has become a milestone movie, and also a depressing marker of Hollywood's reluctance to treat women as a storytelling force either onscreen or behind the scenes. On the surface, Off the Cliff sketches this one-in-a-million serendipity with breezy style; beneath it, this slice of movie history invites you to think about why it's one in a million at all.