Accessibility links
Ivanka Trump Isn't Just Any White House Staffer But How Much Influence Does She Have? Some progressives and women hoped Ivanka Trump would be a moderating force on her father. But, five months into his new administration, there is limited evidence that it's working out that way. 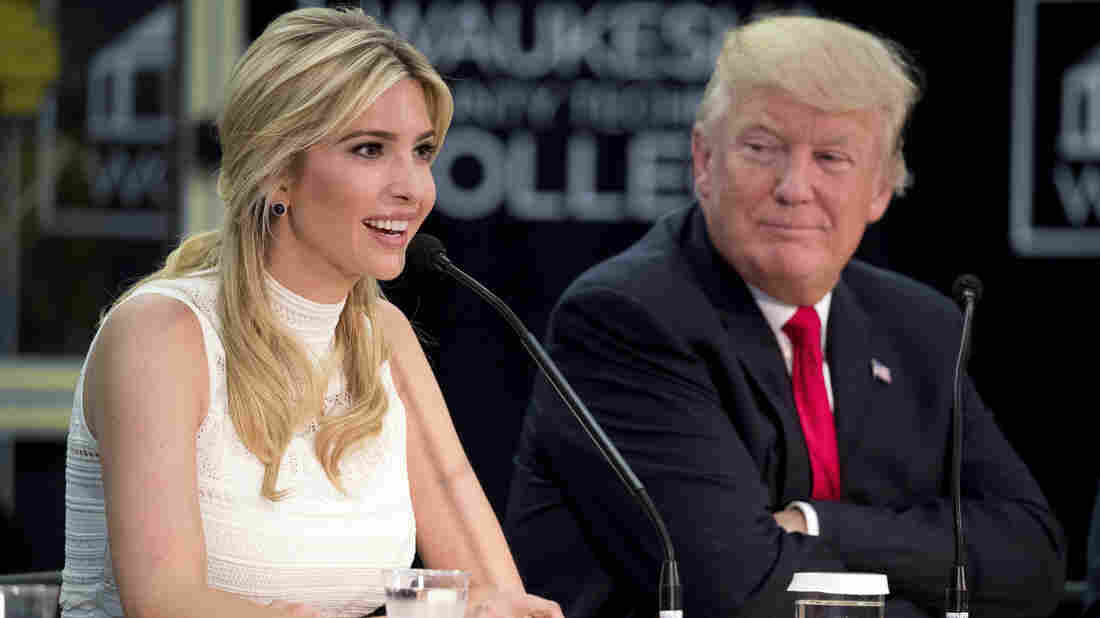 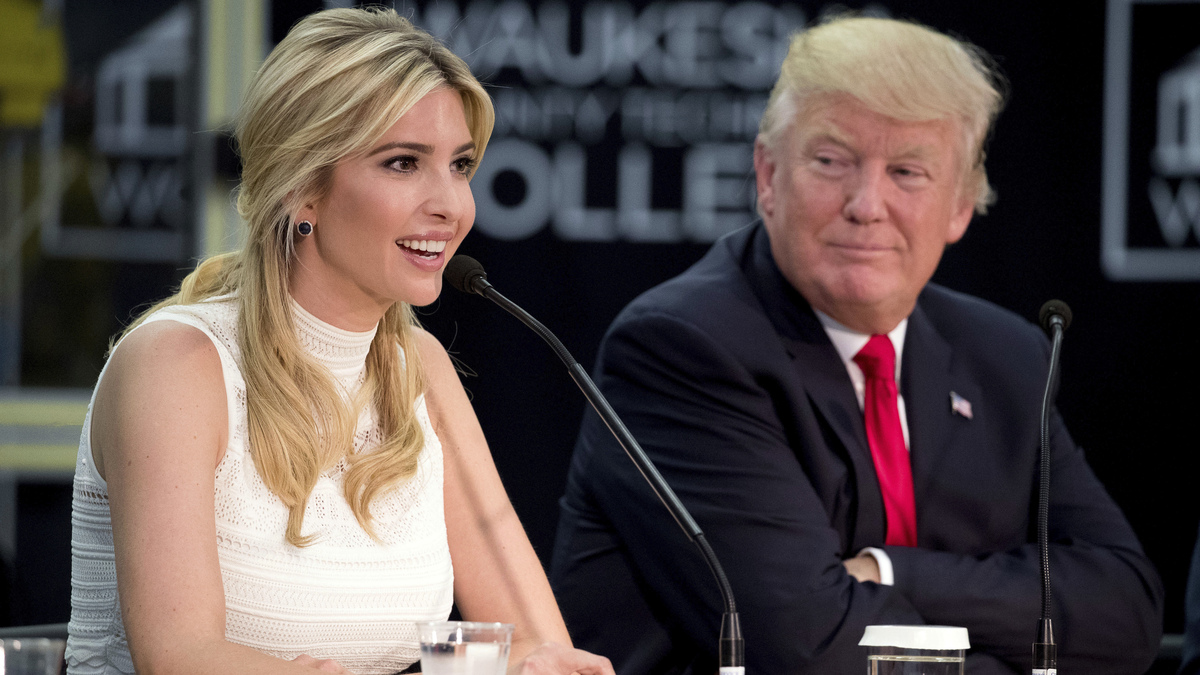 Ivanka Trump is a lot of things: a mother, a wife, an entrepreneur, an Instagram goddess and a first daughter. But there is one thing she recently said she is not:

"I don't profess to be a political savant," she confessed to Fox & Friends host Ainsley Earhardt in an interview.

"I try to stay out of politics," she said in a measured, half whisper.

It was an attempt to deflect a question about President Trump's controversial tweets — and that was before Trump's latest attack on MSNBC's Mika Brzezinski. But it was an odd statement to make for someone with a West Wing office who serves as an adviser to the president, someone who is widely considered to be one of the president's closest advisers and someone who is in a unique position potentially to influence policymaking.

And it set off an intense backlash from critics who argue that Ivanka Trump can't, in one instance, choose to be perceived as an influential voice within her father's inner circle, and then, in another, simply be a woman concerned with issues.

"When you're working for the president in the White House, it doesn't really seem like it should be an option," said Jill Filipovic, author of The H-spot: The Feminist Pursuit of Happiness.

"Donald Trump and Ivanka can't have it both ways," she added.

To try to do so is a great betrayal of the American public, Filipovic argued, because the 35-year-old Trump was first "trotted out," the author said, by her father's campaign team and now his administration, to tamp down the fears of moderates and of women who are concerned about the president's policies on everything from the environment to refugees to women's rights.

The tactic was extremely effective, Filipovic said, but is now devoid of all meaning in her view — as the first daughter is unwilling to publicly express where she and her father disagree.

"I don't see how they can put her out there as someone who is independent, who does take a different perspective from the administration, and then also refuse to say how," she said.

Filipovic fears women are being bamboozled: "Because what [Ivanaka Trump's] really doing is putting a pretty face, and a palatable face on what's a very, very ugly and very misogynist administration," she said.

She notes Trump's track record when it comes to some of the president's controversial policy positions in the last five months. Despite the first daughter's efforts to sway the president on the Paris Climate Agreement — she brought in Al Gore and, reportedly Leonardo DiCaprio as well, to meet with her father prior to Inauguration Day — he went the other the way and backed out of the international effort to battle climate change. In all of the advice she dispensed in her book, Women Who Work, she remained silent about reproductive rights. And, despite touting that she would be a champion for women's economic empowerment, Politico report Friday that the White House may dissolve the Council on Women and Girls.

But not everyone sees the first daughter's unique role and position that way.

For anyone out there arguing that Ivanka Trump is not fit to hold such an influential role within the administration because she has no prior policymaking experience, Wead points to history.

"All through [U.S.] history, the number of young men who served as secretaries to their father was almost a tradition," he said. In fact, when George Washington was about to leave office, he lobbied John Adams, the incoming president, to employ his own son, John Quincy Adams.

In all, Wead counted 14 instances in which a sitting president has informally entrusted a daughter or daughter-in-law to "virtually run the shop." Martha Johnson Patterson helped her father Andrew Johnson run parts of the government and even lobbied Congress to fund a restoration of the White House, which was in disrepair at the time. She won that battle by embarrassing Congress when she led a handful of cows onto the White House South Lawn demonstrating to the tight-fisted lawmakers that she ran a frugal household that produced its own milk.

Wead also cautioned critics not to judge too soon.

"It's very early to make any kind of observation," he said, adding that it's only now — more than 70 years later — that historians are learning the degree to which Anna Roosevelt contributed to Franklin Delano Roosevelt's administration. "She practically ran the White House in his last year in office."

Tina Tchen, who served as chief of staff to first lady Michelle Obama and as an adviser to President Obama, said she understands Ivanka Trump's predicament and empathizes with the position she is in.

"If you're doing your job you're not speaking out separately from the president of the United States because that's who you work for," she said.

The role of any staffer, whether they are related to the president or not, Tchen said, is to provide as much information and expertise as possible, express his or her viewpoints "behind closed doors" and not just accept but publicly support whatever decision the president makes.

Tchen also argued Ivanka Trump has achieved a few notable successes. Among them, the launch of a World Bank fund for women entrepreneurs. And while Trump may speak in general platitudes when it comes to some women's issues, Tchen remarked, the fact that child care and parental paid leave are topics of discussion among lawmakers, is a genuine feat and credit to the work that the mother of three is doing.

"It used to be the case that politicians didn't actually talk about paid leave. People didn't think that it was something that governments should do," Tchen said.

And Tchen's got some advice for progressives and feminists who blame Ivanka Trump for not being able to achieve more.

"Ultimately, the direction of the policy begins at the top," Tchen said. "So it's never any one adviser, it really starts with the president."