Accessibility links
Another July 4th Anniversary: Pathfinder's Landing On Mars In 1997, the spacecraft's mission paved the way for the more sophisticated rovers operating on the Red Planet today. 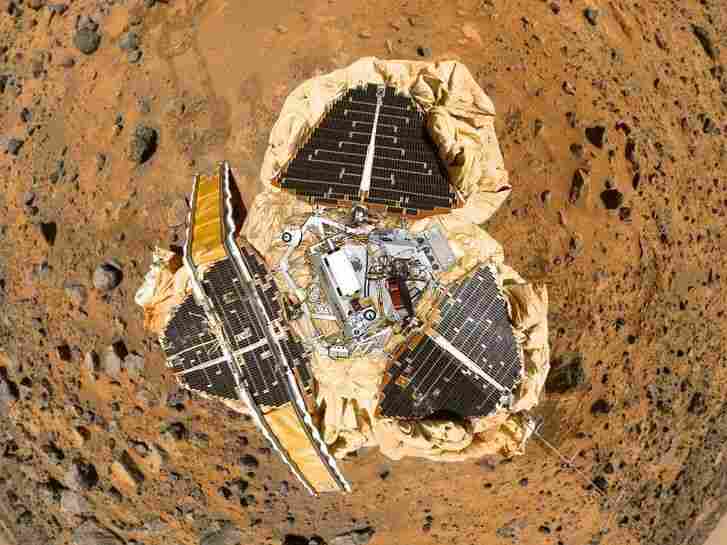 A composite self-portrait of the Mars Pathfinder. NASA/JPL hide caption 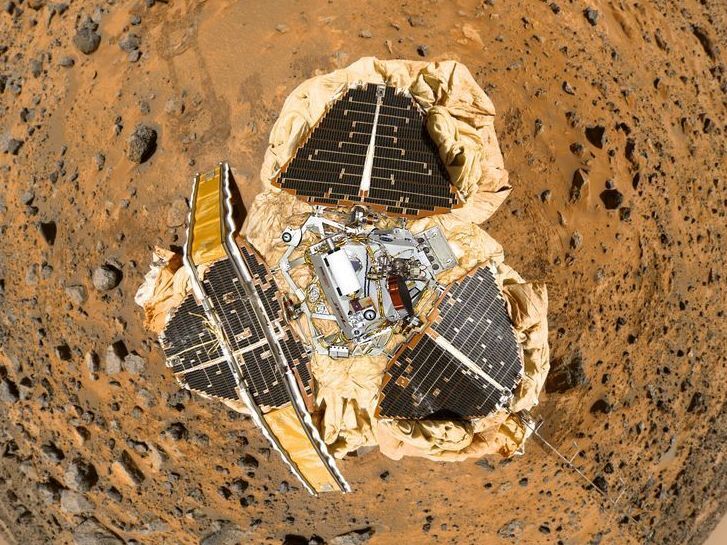 A composite self-portrait of the Mars Pathfinder.

Twenty years ago Tuesday, a plucky little probe named Pathfinder landed at Ares Vallis on the surface of Mars.

It didn't land in the traditional way, with retrorockets firing until it reached the surface. No, Pathfinder bounced down to its landing site, cushioned by giant air bags. It was a novel approach, and the successful maneuver paved the way for a similar system used by the twin rovers Spirit and Opportunity in 2003.

I was at NASA's Jet Propulsion Laboratory on landing day. JPL is the home of mission control for most of NASA's planetary missions. Prior to the landing at 10 a.m. PT, engineers nervously watched their consoles, even though there was really nothing they could do if there was a problem. It takes several minutes for a radio signal from Mars to reach Earth, so the landing sequence was already well underway when the first signals reached Earth.

I had spent a lot of time before landing day getting to know the scientists and engineers involved in the mission. I didn't talk to all of them, but it was a relatively small team, and I spoke with a lot of them. I knew well how hard they had worked on the mission, and how many things had to go just right to make it a success. I knew they had good reason to be apprehensive.

But the landing went flawlessly, and I witnessed anxiety turning into unbridled joy. That day is one of the highlights of my career in science journalism.

At a news conference after the successful landing, mission scientist Matthew Golombek was gushing. 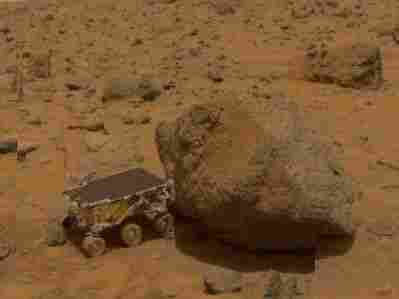 Close-up of the rover Sojourner taken by NASA's Mars Pathfinder next to a rock called "Yogi." NASA/JPL hide caption

The rover Golombek was talking about was called Sojourner, a pint-size version of the larger rovers NASA has subsequently sent to Mars. Sojourner lasted 83 days and traveled a whopping 100 yards.

Before they went silent, the lander and rover sent back a total of more than 17,000 pictures. The mission didn't exactly rewrite the textbooks about Mars, but the images and data from the probe's scientific instruments suggested that once upon a time the Red Planet was warm and wet, quite the opposite of the cold, dry place we see today.

On this 20th anniversary of the Pathfinder landing, I'd also like to take a moment to correct a misleading statement we made two decades ago on All Things Considered. In the introduction to a chat between me and host Robert Siegel, we said the following:

"After traveling for seven months and more than 300 miles, the U.S. spacecraft Pathfinder landed on Mars today."

Although strictly speaking that's true, I meant to write "300 million miles." I don't suppose too many people think Mars and Earth are only 300 miles apart, but I didn't mean to give the impression that I was one of them. I have felt bad about that ever since. It didn't help that a few years later, NPR decided to put a transcript from one of our shows on all of its business envelopes, and wouldn't you know, they chose the transcript with that misleading statement in it.

OK, I feel much better having gotten that off my chest.