Accessibility links
Xbox Bowling For Seniors? Visit Your Local Library The number of older people involved in the arts programs at the Brooklyn Public Library is up more than 50 percent since last year. They want a chance to write new chapters in a place for all ages. 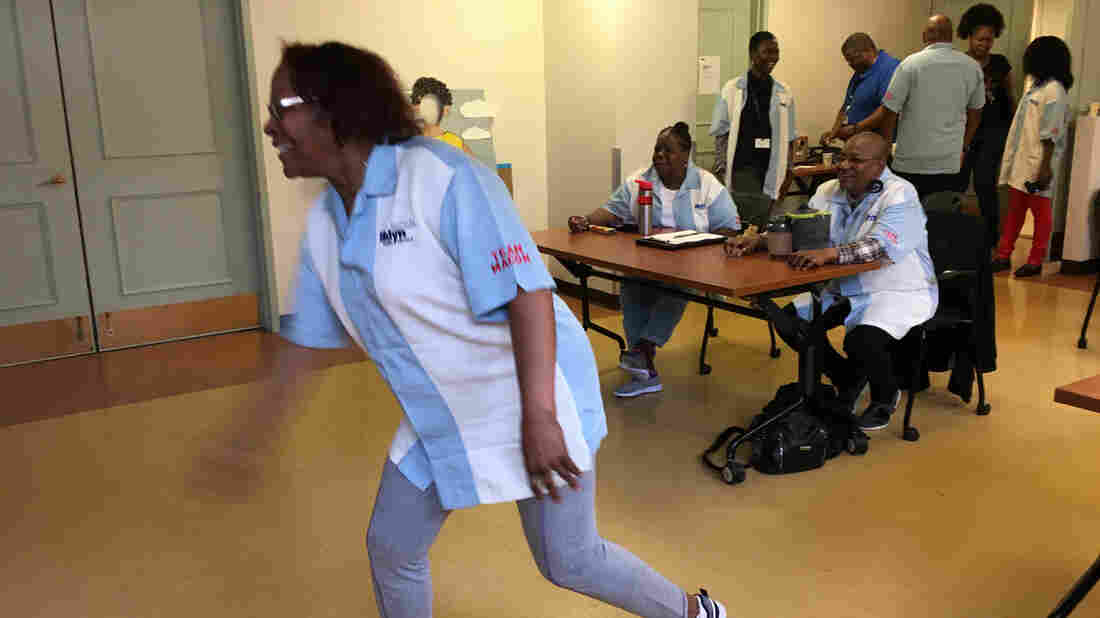 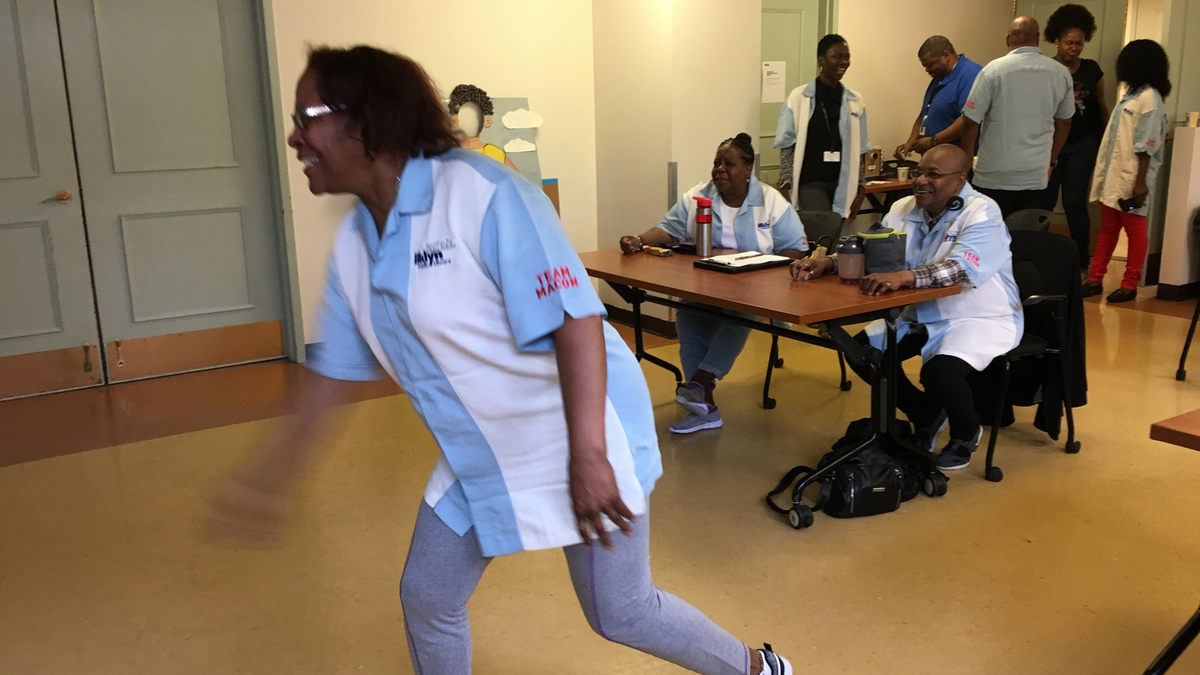 Adina Acevera and other seniors at Brooklyn's Macon Library have teams and tournaments, complete with matching shirts, for Xbox bowling.

For the past three years, 74-year-old Alice Baker has come to the Macon Branch Library in Brooklyn almost every Thursday morning.

That's when the wildly popular Xbox bowling league meets. But Baker also has learned to quilt at the library and says quilting is now a regular part of her life.

The two programs are a small part of efforts in Brooklyn and other cities to expand offerings for older adults at libraries. What appeals to Baker is that she can attend activities for people her own age in a place that welcomes people of every age.

"They have exercise, they have classes for kids. It brings everybody in," says Baker. "You can bring your family with you."

Some of the programs — virtual bowling, for instance — don't strike people as part of a library's mission. Nick Higgins, director of outreach for the Brooklyn Public Library, sees it differently.

"A good library reflects the needs of its particular community," he says. "Our older adult community is growing rapidly. ... They're starting to exhibit some mobility issues. They're looking for opportunities other than movie night, something active and social. And the public library is a perfect space for that to happen."

At Brooklyn's libraries, there are now twice as many Xbox bowling teams for seniors as there were last year.

One can see why at the Macon Branch. With a lot of team spirit on display, a dozen or so people are all wearing matching bowling shirts. They take turns facing a large screen displaying the alley and pins, then go through the motions of bowling as if they had a ball. As each one steps up to the line, the room echoes with shouts of encouragement, cheers for a strike, and groans for a missed spare.

But it's not only about fun and games. Arts courses for older adults have also expanded. And participation is up by more than 50 percent since last year, maybe because of the wide array of options, from watercolor painting to salsa dancing to story-telling. 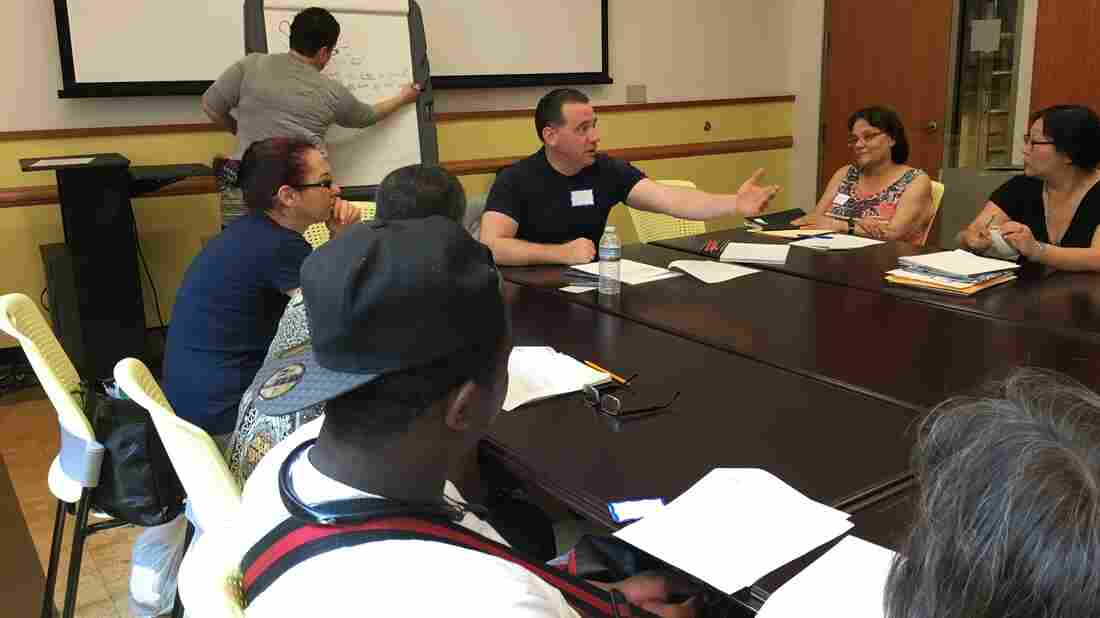 Poet Dave Johnson is one of the teachers of an 8-week memoir writing class at the Brooklyn Central Library. Ina Jaffe/NPR hide caption 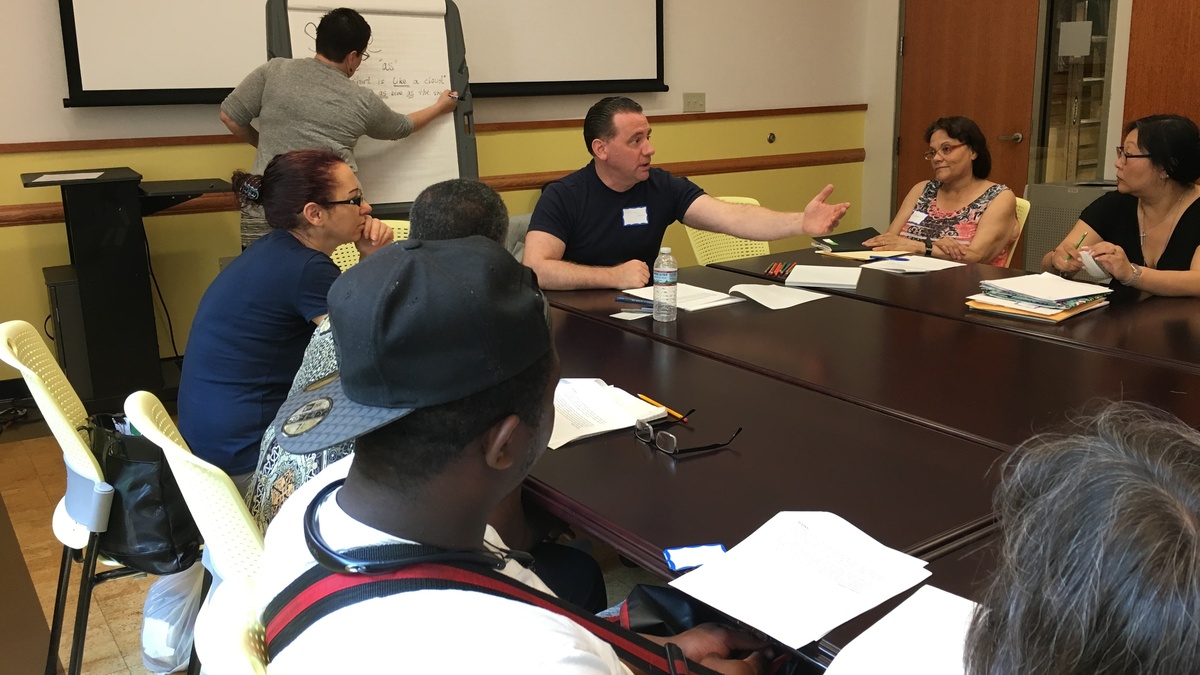 Poet Dave Johnson is one of the teachers of an 8-week memoir writing class at the Brooklyn Central Library.

On a Wednesday morning at the Brooklyn Central Library, the class is memoir writing. Poet and playwright Dave Johnson is one of the teachers.

"As you tell the story, I want you to also use simile and metaphor," says Johnson. "I mean, you might say, yeah, he's a little bit like a porcupine, right?"

None of the people in the class are experienced writers. A few have only recently learned to read and write in one of the library's adult literacy classes. For this day's class, they're supposed to write something about the differences between members of their families.

"Of course you can make it up," says Johnson, laughing. "We're not gonna know the difference."

He reads his work to the class: "My mother very religious, God-fearing, a good provider, but distant like Africa." His oldest brother the "symbol of success," his other brother "a mystery," his step-father "without a spine." He concludes, "Somehow I felt like a visitor there ... many different personalities, but all seeking something, all avoiding something."

The room is silent for a moment when he finishes reading. Then the spell is broken with applause from his classmates.

James says he comes to the library a lot. He says he prefers the mix of people there to what one would traditionally find at a senior center. But he concedes that's probably an unfair image of what senior centers are.

"I have this stereotype in my head," he explains. "Sometimes some centers limit the activities of seniors to like bingo, yoga, and some things that I'm just not interested in."

The memoir class is sponsored by an organization called Lifetime Arts, which develops a variety of arts classes for older adults. Contrary to James' image, Lifetime Arts also works with senior centers. But the organization is best known for its work with more than 80 public libraries in 13 states.

Maura O'Malley is the CEO and co-founder. She says that whether the classes are in writing or painting or choral singing or salsa dancing, all of them are taught by professional artists, and structured to result in a final project or performance.

"And that's the exciting thing about this work," she says. "It's about rebuilding connections as you age and about finding new ways of living and expressing yourself. It's not about entertainment."

It's about the opportunity to write new chapters in life, no matter one's age.