Accessibility links
Trump's Media Bashing Turns Teddy Roosevelt's Bully Pulpit Inside Out For Teddy Roosevelt, it was a way of saying the presidency was a matchless opportunity to raise consciousness, to lecture if you will — relying on independent media to convey the president's ideas.

Trump Puts A Twist On The Meaning Of 'Bully Pulpit'

Trump Puts A Twist On The Meaning Of 'Bully Pulpit' 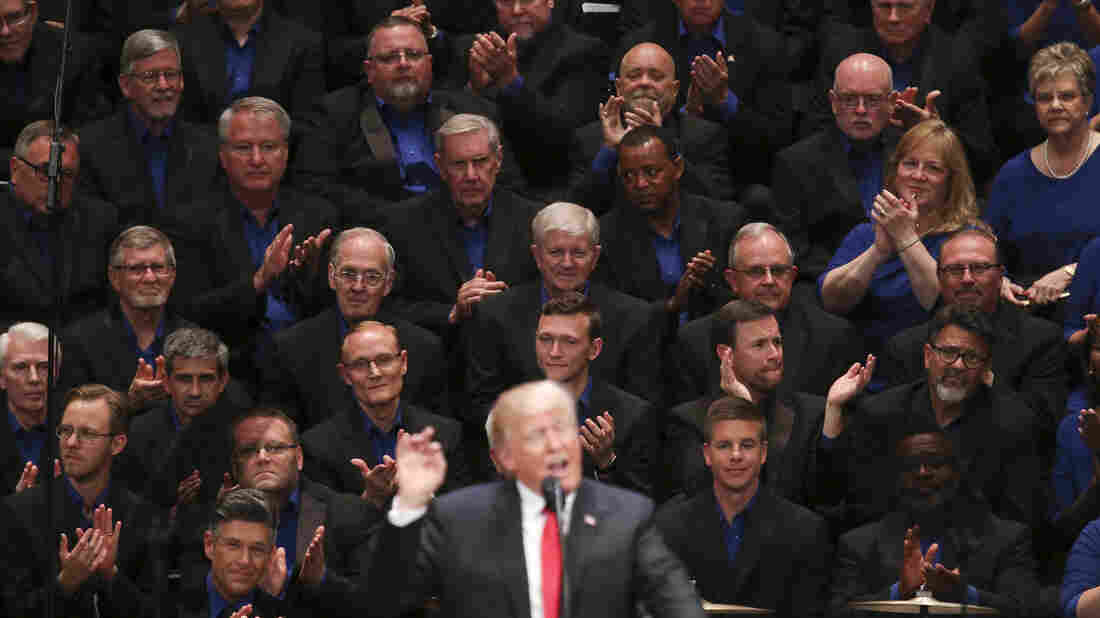 President Trump speaks on Saturday during an event celebrating veterans at the Kennedy Center for the Performing Arts in Washington, where he continued his rhetorical attacks on the media. Carolyn Kaster/AP hide caption 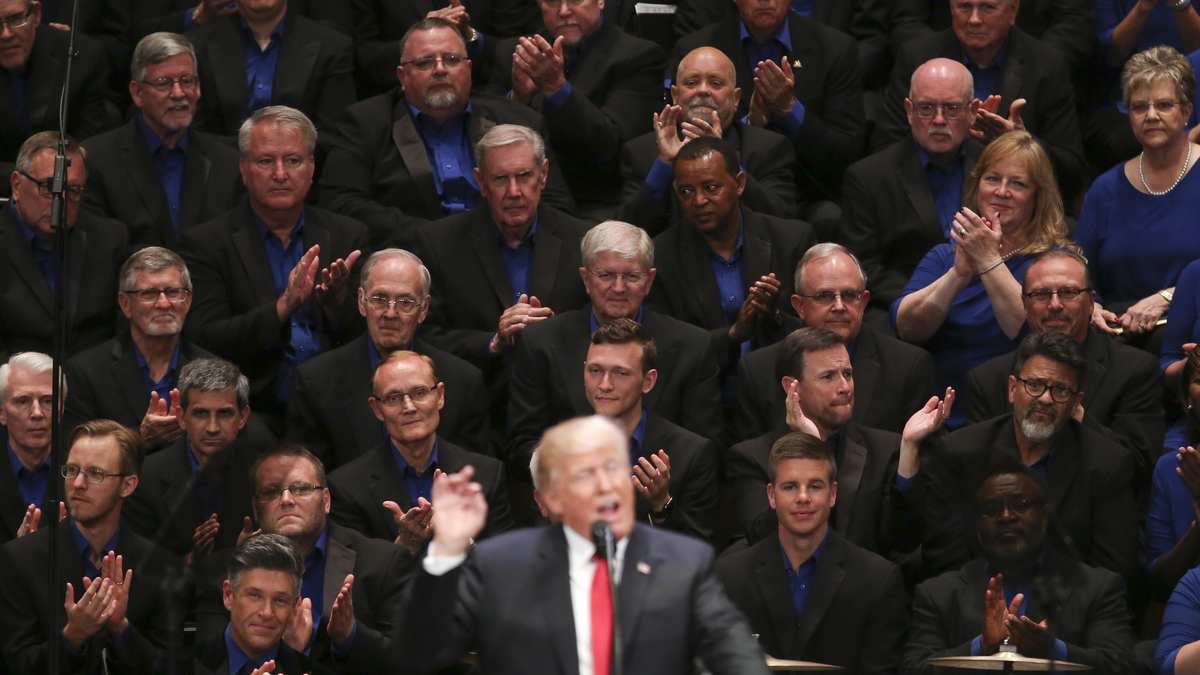 President Trump speaks on Saturday during an event celebrating veterans at the Kennedy Center for the Performing Arts in Washington, where he continued his rhetorical attacks on the media.

More than a century ago, President Theodore Roosevelt had a habit of inviting journalists to the White House to share some of his thoughts. In one such chat he coined a phrase that has been part of our political language ever since.

"Half a dozen of us were with the President in his library," recalled one participant. "He was sitting at his desk reading to us his forthcoming message. He had just finished reading a paragraph of a distinctly ethical character when he suddenly stopped, swung round in his swivel chair and said 'I suppose my critics will call that preaching, but I have got such a bully pulpit!' "

The participant who first repeated that phrase knew something of words with a "distinctly ethical character," and something of preaching as well. He was Lyman Abbott, a former Congregationalist minister who became a liberal theologian and editor of The Outlook, a magazine of the Progressive era.

Trump Tweets Clip Of Him Bodyslamming CNN; Network Says 'Do Your Job'

To Abbott, Roosevelt was saying that a president could reach the country with high-minded ideals through his public pronouncements and command of press attention. Indeed, within a week of Abbott's first printing the phrase in 1909 it was picked up by The New York Times.

The late William Safire, a Times columnist and lexicographer, also stressed the loftier intentions of Roosevelt's pulpit in Safire's Political Dictionary. He called it "the active use of the president's prestige and high visibility to inspire or moralize." (Emphasis added.)

The term also described the spirit of journalism in McClure's and other journals of the time, which fostered many of Roosevelt's reformist ideas, as chronicled in Doris Kearns Goodwin's 2013 book The Bully Pulpit.

But if that was T.R.'s understanding of his pulpit, what did he mean by the word bully? It was clearly not our contemporary sense of a "blustering or browbeating person ... habitually cruel, insulting or threatening to others who are weaker," as Merriam-Webster defines the word.

In the T.R. era, the word bully still had currency in its positive connotation, as in "bully for you." That usage apparently derived from a Dutch term for plenty, or an older Dutch term for a sweetheart or boon companion. Roosevelt used it a lot, including as a description for the Spanish-American War, which he called "a bully time and a bully fight" (with no trace of irony).

In his time, he might also have called his pulpit "splendid," perhaps. Today, Goodwin suggests, he might have said "awesome."

Interestingly, Merriam-Webster chose "bully pulpit" for its Word of the Day podcast on the day of our most recent presidential election.

In the months since, we have seen President-elect and President Trump actively use various platforms and media to exhort his followers and pursue his agenda. He has made an impact and an impression many times in doing so, and those who follow closely his public appearances and pronouncements had to find this past weekend particularly compelling.

On July 1 and 2, Trump brought forth his own redefinition of T.R.'s idea of the presidency in a most vivid manner.

The most arresting moments once again unfolded on Twitter.

The president continued his dreary and highly personal feud with the hosts of Morning Joe on MSNBC. But the new stunner was a presidential retweet of a 2007 video showing him knocking down and pummeling a person outside the ring at a wrestling match. The 28-second video had been altered to label Trump's chosen adversary CNN — and then to denounce "FNN: Fraud News Network."

On Saturday night, just hours earlier, the president had been the headliner for the "Celebration Freedom" at the Kennedy Center in Washington, a gathering of religious conservatives sponsored by the First Baptist Church of Dallas and Salem Media Group.

Choirs sang religious and patriotic songs and a new number featuring Trump's 2016 slogan — Make America Great Again — in its lyrics. Trump took the podium and declared: "Above all else, we know this: In America we don't worship government, we worship God."

Trump brought the faithful to their feet multiple times with promises to defend religious liberty and restore "Merry Christmas" over "Happy Holidays."

In the news and on social media, there were endless denunciations and defenses of the president's retweeted video, interspersed with images of him preaching to the choir at the Kennedy Center. The president seemed proud to present himself on Twitter as a bully, by contemporary definition, in one moment. Then he seemed just as proud to be in the pulpit in the next.

"Bully pulpit" was T.R.'s way of saying the presidency was a matchless opportunity to raise consciousness, or lecture if you will, regarding important issues of conscience and ethics — relying on independent media to convey the president's ideas.

Trump surely has that kind of command over some media outlets, or at least over certain media personalities or shows. But he has become increasingly focused, some would say obsessed, with the media shows and personalities who persist in criticizing him.

It seems to have become his prime focus, or at least that of his public persona. It absorbs him when he is in his pulpit.

"The fake media are trying to silence us, but we will not let them," Trump told his congregation on Saturday night. "The fake media tried to stop us from going to the White House, but I'm president and they're not."

Theodore Roosevelt seemed to understand how the relationship between his aims and the function of the media could work to mutual benefit. Reproducing that understanding remains a challenge for the relationship in the early months of the Trump era.