Accessibility links
Watching Foreign Movies Is Illegal In North Korea, But Some Do It Anyway "The idea that North Korea is an information black hole is simply not true anymore," says reporter James Pearson. There's a brisk black-market trade in illicit media on USB sticks and micro SD cards. 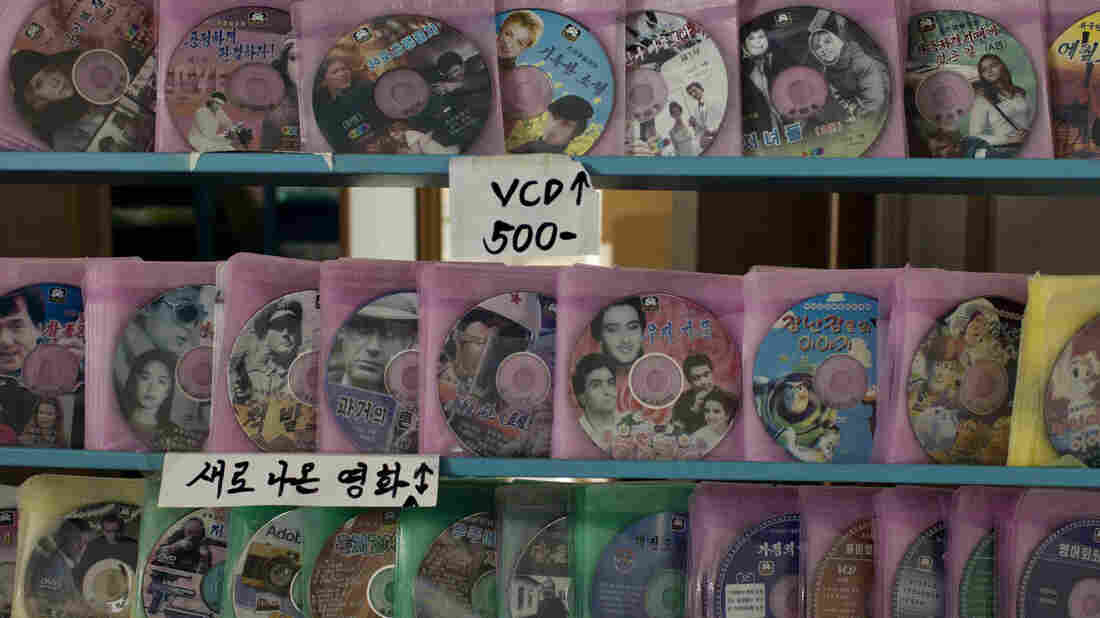 A recent study found that TVs and DVD players have "reached near ubiquity in North Korea across nearly all demographic, socio-economic and political class divides." Some shops in Pyongyang offer DVDs and video CDs for sale, as shown here. Foreign movies or videos are often stored instead on USB sticks or micro SD cards and sold on the black market. Alexander F. Yuan/AP hide caption 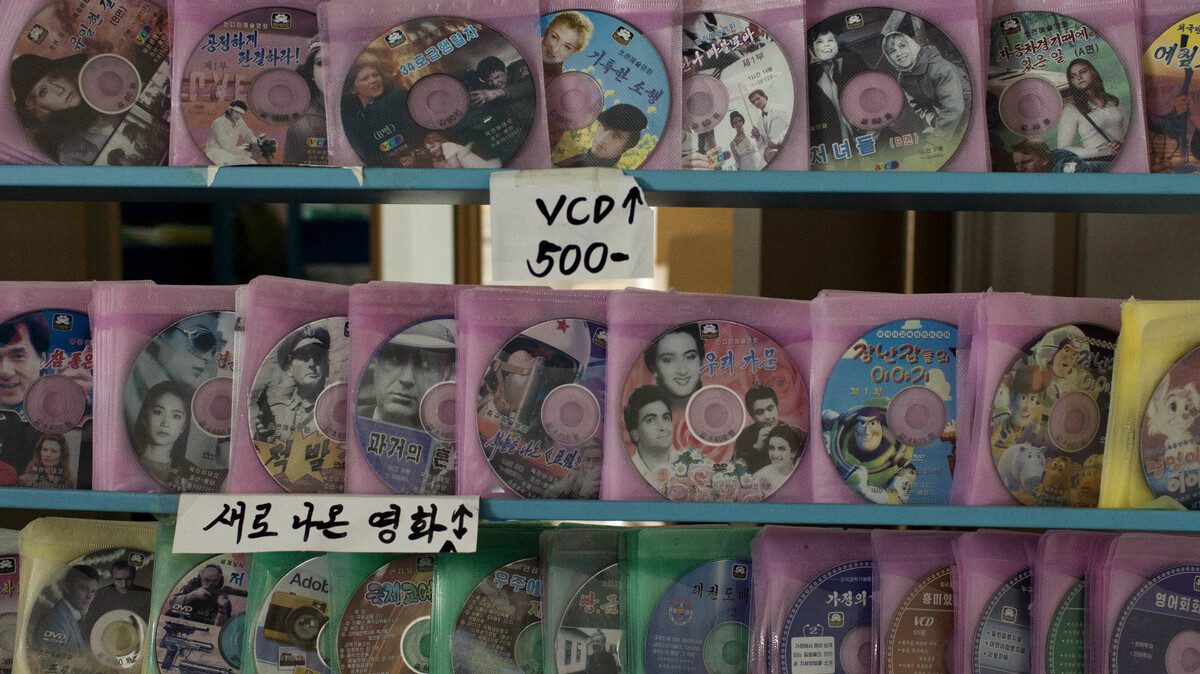 A recent study found that TVs and DVD players have "reached near ubiquity in North Korea across nearly all demographic, socio-economic and political class divides." Some shops in Pyongyang offer DVDs and video CDs for sale, as shown here. Foreign movies or videos are often stored instead on USB sticks or micro SD cards and sold on the black market.

When Yeonmi Park was a young girl in North Korea's Ryanggang Province, near the Chinese border, she went to her uncle's house to watch TV. But this wasn't the usual state-run broadcast praising the "Dear Leader." The movie she watched at her uncle's house was illegal.

She covered the windows with blankets, turned the volume down low and huddled in close around the TV. She watched a pirated copy of Titanic.

"When I saw that movie for the first time, I was very confused," Park says. "I never heard my father telling my mother that he loved her. And my mother never told me she loved me, either. To me, love was only expressed [for] the Dear Leader. So, it was a very odd concept to me — how can a man die for a woman?"

"Just for a couple of hours, you forget about how life is so hard," says Park, who now lives in the U.S. "Almost dreaming about a different planet."

Park's experience doesn't reflect the North Korea we think we know — and her story is not unique. 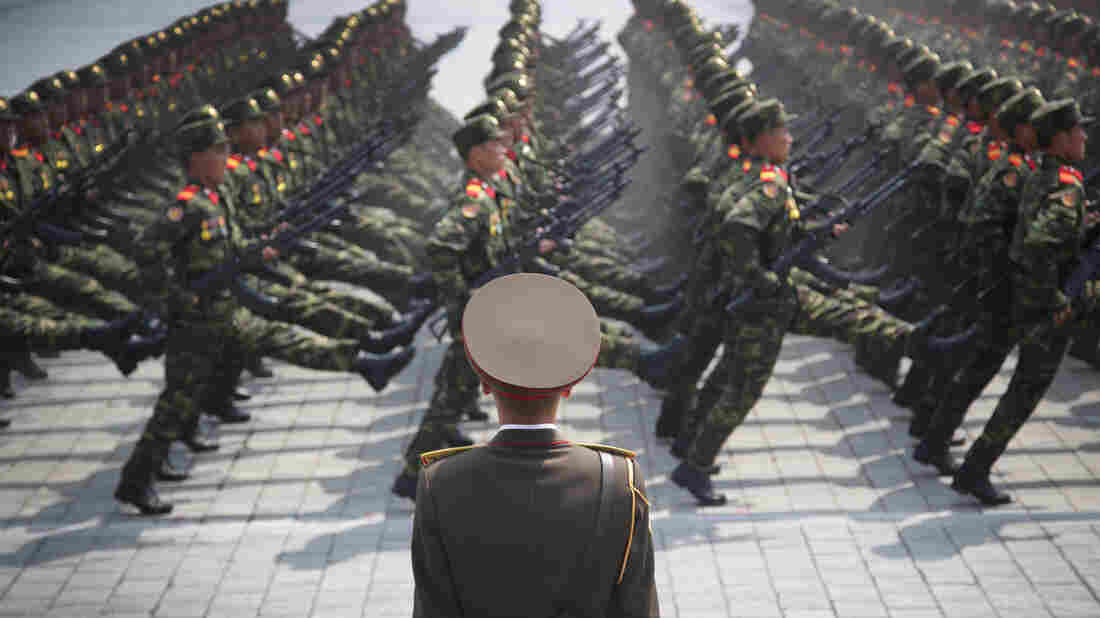 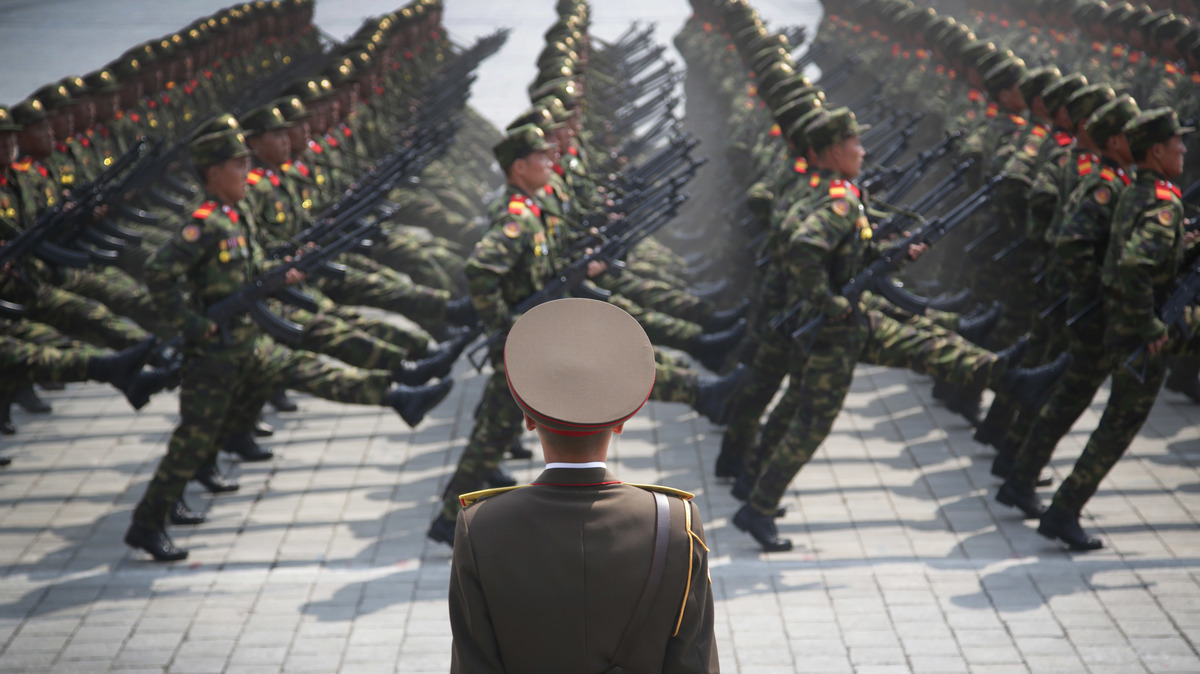 Soldiers march across Kim Il Sung Square during a military parade in Pyongyang.

We see a country in isolation, but in today's society, even the most repressive regime can't keep everything out.

"The idea that North Korea is an information black hole is simply not true anymore," says James Pearson, a reporter for Reuters in South Korea and co-author of the 2015 book North Korea Confidential.

Pearson says illicit media undermines the Pyongyang regime because even Hollywood movies like Titanic can be subversive.

"That can start to change people's thinking," he says. "When you talk to defectors who've left the country, many of them say, 'It was looking at foreign media that started to help me question what it is that I hear from the government. Perhaps things aren't OK here.' "

According to a recent report by the Washington-based research group InterMedia, "media devices such as televisions and DVD players have reached near ubiquity in North Korea, with access and ownership a common phenomenon across nearly all demographic, socio-economic and political class divides." In Intermedia's survey of a group of 350 North Korean defectors, refugees and travelers, 92 percent said they watched foreign content on a DVD player.

"You can find anything but a cat's horn"

To understand how illicit media reaches such a closed-off society, you have to look to the mid-1990s. The fall of the Soviet Union crushed North Korea's fragile economy, and floods helped bring a devastating famine. The North Korean government failed to feed its people.

In that time of crisis, when North Koreans could no longer rely on the state, signs of grass-roots capitalism emerged, Pearson says. Makeshift stands popped up around the country, where people traded goods and food.

"During the famine, people said that the ones who turned to capitalism and trading were the ones that survived," Pearson says. "And that has been the real economy ever since. In a way, it's kind of North Korea's biggest open secret."

The black market has grown, he says, because government officials benefit from it. State salaries are so low that border guards can easily be bribed. Goods flow in from China — and these days, that includes more than food.

"There's a saying in North Korea," Pearson says. "'You can find anything but a cat's horn.' Meaning that if it exists, you can probably find it in the markets."

Charles, a North Korean defector now in the United States, used to peddle bootleg DVDs to make money — he says he risked his life doing it.

NPR contacted Charles — the Americanized version of his Korean first name — through the U.S. nonprofit Liberty in North Korea. We're withholding his last name to protect relatives he left behind.

I was a kid — I was 14 or 15 — so nobody would suspect me. I'd hide [DVDs] under my clothes, and some of them in my jackets, inside the pockets in the jackets. Everywhere.

"One of my friend's father was a police officer," he says. "At midnight, he'd go out to residences and crack down on foreign media."

Despite being a government official, he kept the confiscated DVDs for himself, so Charles always knew where to find the best movies. Without his friend's father ever knowing, Charles secretly copied the confiscated discs and redistributed them right back onto the market.

"I was a kid — I was 14 or 15 — so nobody would suspect me. I'd hide [DVDs] under my clothes, and some of them in my jackets, inside the pockets in the jackets," Charles says. "Everywhere."

Since Charles, now 22, left North Korea, it has become much easier to conceal foreign content. Traders and smugglers have turned to USB sticks and micro SD cards instead of DVDs.

"That's been a really popular way to spread information," says Pearson. "You can hide them between the pages of a book — you can swallow them, even, if you're caught with them."

Demand is so high that some Chinese companies manufacture products geared to the North Korean market. Pearson has reported on a device called the "notel," a portable media player with a USB input. Users plug two things in at once: the illicit media on a USB stick, and in case of inspection, a state-approved propaganda disc.

"Like, 'Kim Jong Il's Greatest Hits,' " Pearson says. "Should there be a knock on the door from the bowibu, which is the Gestapo, Stasi-esque institution in North Korea, you can just pull out the USB stick, open up the DVD drive and say, 'Look, I was watching this.' "

Viewing and selling illicit media is still dangerous in North Korea. Under Kim Jong Un, defectors report stricter crackdowns by specialized government units that are much harder to bribe than their predecessors. But it doesn't seem to deter people from watching in secret.

"People crave to know what they don't know. People want to do what they're told not to do," says Jieun Baek, author of North Korea's Hidden Revolution.

She says this presents an opportunity for governments like the U.S. and South Korea to step in and take advantage of the demand for illegal foreign media.

"South Korea has both government- and independently funded programs that have been beaming information into North Korea for decades. Same with the U.S.," Baek says. "But all of this has to be ramped up substantially for there to be an effective counter-balance to North Korea's domestic propaganda machine."

She says it's a cost-effective way to lay the groundwork for long-term change. But it won't happen overnight.

"I think it's important to not over-romanticize the power of foreign information. 'Pyongyang Square' is not going to take place tomorrow because of a couple of USBs," Baek says. "But by flooding this country with foreign information, there will be dissenters in both thought and action who will emerge from within North Korean society."