Accessibility links
Trump To Meet With Putin At G-20 Gathering Of World Leaders President Trump is scheduled to have a face-to-face with Vladimir Putin at the G-20 summit. Trump has said he'd like closer ties between the countries, but Russia is under fire for election meddling. 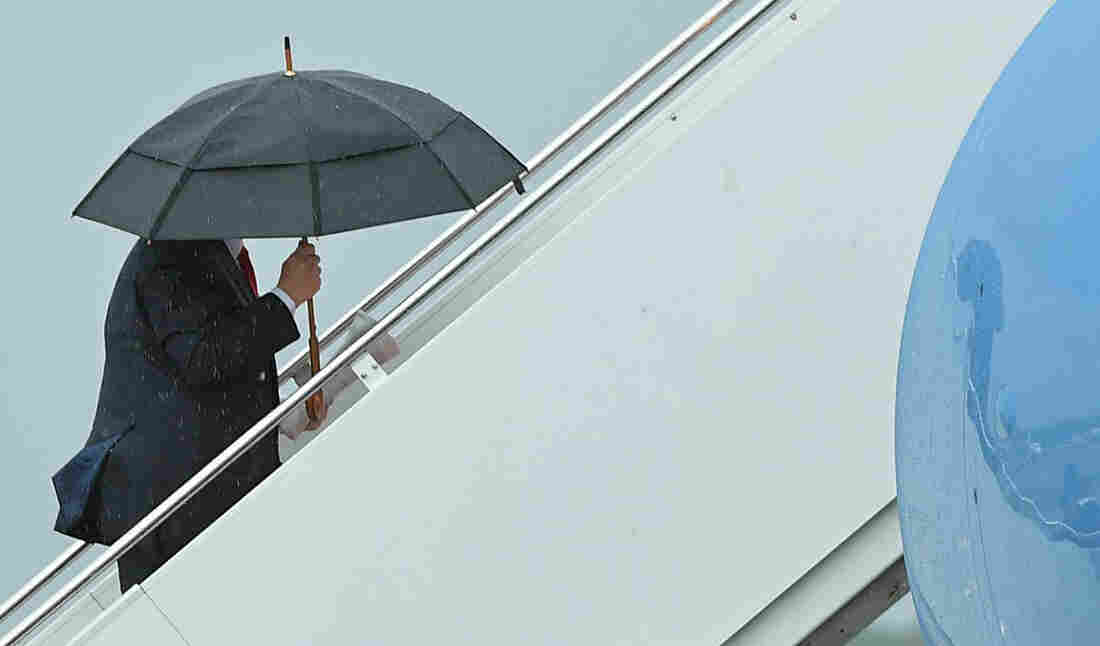 President Trump boards Air Force One before departing from Morristown Municipal Airport in New Jersey over the weekend. Trump is meeting with Russian President Vladimir Putin, among other heads of state, at the G-20 summit. Mandel Ngan/AFP/Getty Images hide caption 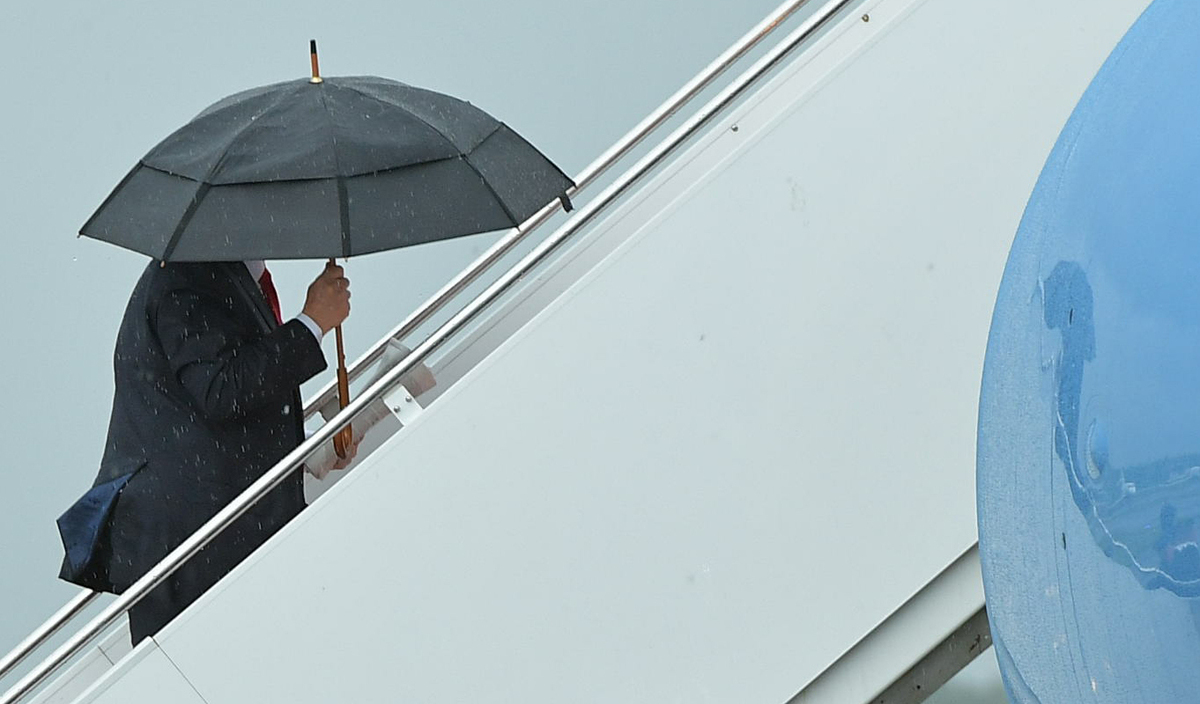 President Trump boards Air Force One before departing from Morristown Municipal Airport in New Jersey over the weekend. Trump is meeting with Russian President Vladimir Putin, among other heads of state, at the G-20 summit.

President Trump arrives in Poland on Wednesday afternoon. Over the next few days, he'll be attending a Group of 20 summit and meeting with a wide array of world leaders.

It's likely none of those meetings will be more closely scrutinized than Trump's first face-to-face sit-down with Russian President Vladimir Putin.

Trump has often said he would like to see closer ties between the U.S. and Russia. But that has been complicated by Russia's meddling in the 2016 presidential election.

Throughout the campaign, Trump routinely praised Putin as a strong leader, often contrasting him with then-President Barack Obama.

"I think in terms of leadership, he's getting an A, and our president is not doing so well," Trump told Bill O'Reilly of Fox News in 2015.

Now that Trump is in office, national security adviser H.R. McMaster says, he has pursued a two-track approach with Russia: looking for areas in which the two countries can cooperate, while confronting the Russians for their bad behavior around the world.

It's a mixed message, and Trump himself has tended to highlight the cooperative part.

"They're a very powerful nuclear country and so are we," Trump told reporters at a news conference in February. "If we have a good relationship with Russia, believe me, that's a good thing, not a bad thing."

Meanwhile, confronting the Russians has largely been left to others in the administration. After a chemical weapons strike in April by Russian ally Syria, Secretary of State Rex Tillerson complained that U.S.-Russia relations had hit a low point. Trump retaliated for the attack by launching a volley of cruise missiles at a Syrian air base. And Tillerson accused Russia of failing to enforce Syria's chemical weapons agreement.

"It is unclear whether Russia failed to take this obligation seriously or if Russia has been incompetent," Tillerson told Group of Seven foreign ministers. "But this distinction doesn't much matter to the dead."

Russia also continues to draw international criticism for its occupation of Crimea, its ongoing interference in Ukraine and its political meddling in the U.S. and elsewhere.

It's that last charge that makes Trump's meeting with Putin especially fraught. The president continues to challenge the conclusion of U.S. intelligence agencies that Russia interfered in the U.S. election to boost his chances of winning. And he fired the FBI director who was investigating possible ties between Russia and the Trump campaign.

A day after that firing, Russian agencies shared photos of an apparently chummy meeting Trump held in the Oval Office with Russian Foreign Minister Sergey Lavrov and Russian Ambassador to the U.S. Sergey Kislyak. That makes the optics of this Putin meeting especially important.

"It's not going to be good for the president's standing back at home if the pictures that come out of that meeting have a smiling, jovial President Trump yukking it up with President Putin the same way that you had the pictures come out of the Oval Office with President Trump and Foreign Minister Lavrov," said Steven Pifer, a retired foreign service officer who oversaw Russian affairs for the National Security Council during the Clinton administration.

Many members of Congress want the Trump White House to adopt a tougher stance on Russia. Last month, the Senate voted overwhelmingly to impose new sanctions on Moscow and make it harder for the White House to relax existing penalties.

As Trump Travels To Summit, Congress May Be Reasserting Itself On Foreign Affairs

Michael O'Hanlon of the Brookings Institution says that even if Trump wants to forge a more cooperative relationship with Putin, political pressures in the U.S. leave him little room to maneuver.

"Trump can't afford to put out any new ideas that he and Putin could engage on, because it's going to seem like he's just beholden to Putin or he's still in Putin's pocket," O'Hanlon said. "So he's got to make a pretty firm statement in this meeting of being frustrated and angered by Russia's behavior."

In his February news conference, Trump acknowledged it might not be possible to build a better relationship with Russia, but he blamed that not on Russia's conduct, but on the news media's.

"The false, horrible, fake reporting makes it much harder to make a deal with Russia," the president said.