'What To The Slave Is The Fourth Of July?' Frederick Douglass, Revisited

'What To The Slave Is The Fourth Of July?' Frederick Douglass, Revisited 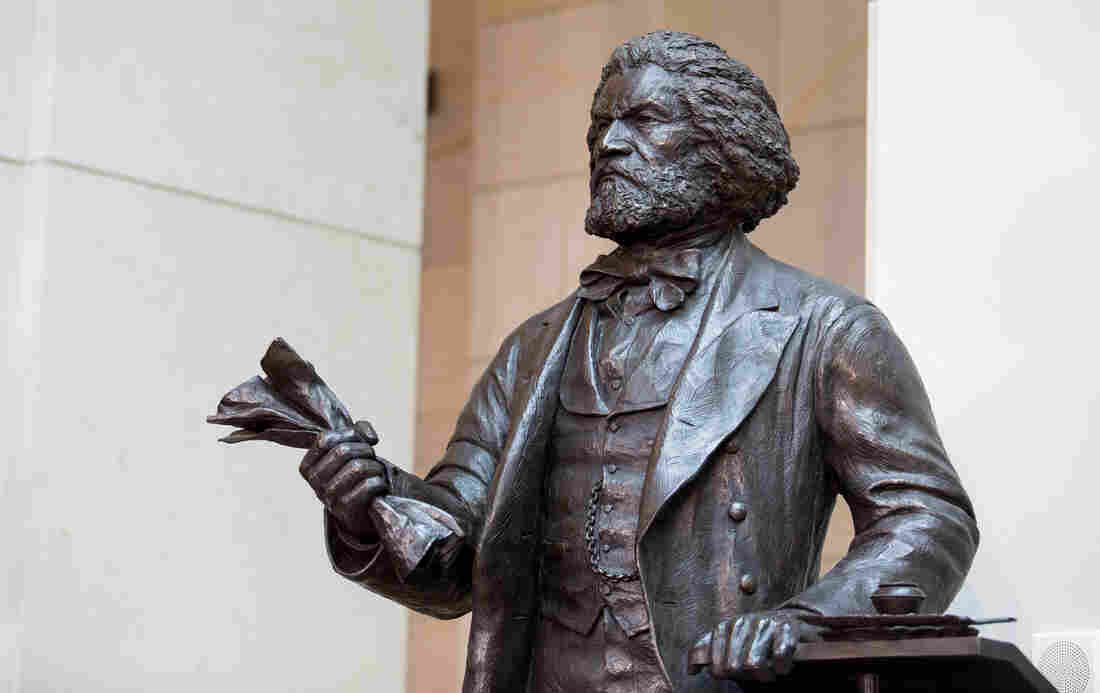 The Frederick Douglass Statue in Emancipation Hall at the U.S. Capitol in 2013. On July 3, the National Archives hosted a reading of Douglass' essay about the Fourth of July. Drew Angerer/Getty Images hide caption 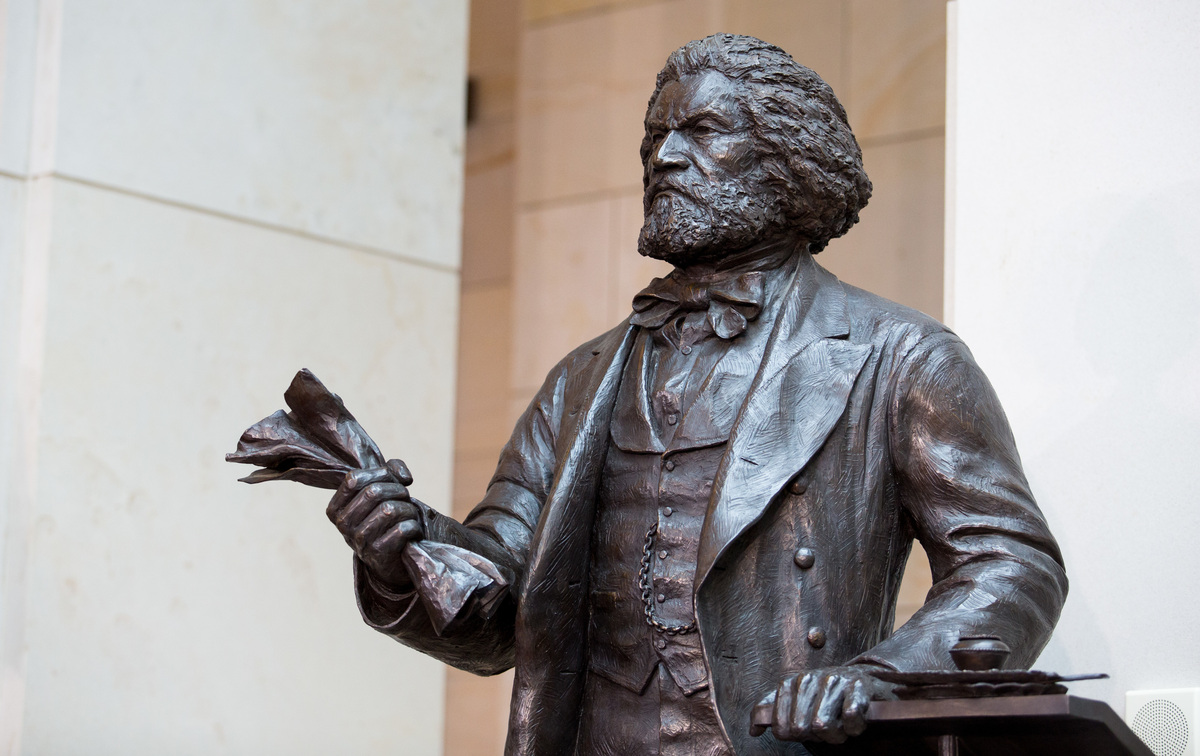 The Frederick Douglass Statue in Emancipation Hall at the U.S. Capitol in 2013. On July 3, the National Archives hosted a reading of Douglass' essay about the Fourth of July.

"What to the slave is the Fourth of July?" posed Frederick Douglass to a gathering of 500-600 abolitionists in Rochester, N.Y., in 1852. Admission to the speech was 12 cents, and the crowd at the Rochester Ladies' Anti-Slavery Society was enthusiastic, voting unanimously to endorse the speech at its end. This speech would be remembered as one of the most poignant addresses by Douglass, a former slave turned statesman. Douglass gave it on July 5, refusing to celebrate the Fourth of July until all slaves were emancipated.

A July 4th Tradition: The Declaration Of Independence, Read Aloud

On July 3, 165 years later, the same question was posed on a stage in the basement of the National Archives, in Washington, D.C. This time by an actor, dressed like Frederick Douglass and wearing a wig, speaking to a 100 or so people, plus the livestream audience, in the William G. McGowan Theater. The event was put on with the help of the Frederick Douglass National Historic Site, which hosts an annual reading of the speech, entitled The Meaning of July Fourth for the Negro.

The National Archives crowd was racially diverse and appeared to be a mix of people who intentionally showed up for the event, as well as sweaty tourists in baseball caps and visors, seeking refuge from the holiday crowds and humidity, in the cool marble depths of the Archives. Outside, men on coolers peddled ice-cold water and "Make America Great Again" hats to passersby.

Inside, Phil Darius Wallace, took on the persona of Frederick Douglass, the master orator, bellowing at the audience, "This Fourth [of] July is yours, not mine. You may rejoice, I must mourn. To drag a man in fetters to the grand illuminated temple of liberty, and call upon him to join you in joyous anthems, were inhuman mockery and sacrilegious irony. Do you mean citizens, to mock me, by asking me to speak to-day?"

The sincerity of the performance captivated the audience as Wallace qua Douglass said, "Hope is much needed, under the dark clouds which lower above the horizon. The eye of the reformer is met with angry flashes, portending disastrous times." Douglass delivered these words to abolitionists in the wake of the Compromise of 1850, a package of legislation that, among other things, amended the Fugitive Slave Act. From Douglass' point of view, the Compromise — which obliged citizens, including residents of the Northeast, to return fugitive slaves to their owners — equaled a nationalization of slavery. He hoped to inspire others to rise up in political resistance.

In today's climate of heightened political polarization and increasingly violent political rhetoric, the words resonated with the crowd and the performer. It has been just over a month since nooses were found on Smithsonian grounds; two men were stabbed to death on a Portland, Ore., train defending Muslim women from hate speech; and just three weeks since Rep. Steve Scalise, R-La. and four others were shot during a practice for the congressional baseball game in an incident that appeared to be politically motivated.

Asked why this speech has staying power, Wallace, the actor playing Douglass, said, "I will say that if it were maybe 15-20 years ago, I don't think we'd feel the heat of the speech the way we do in 2017 because of some of the events that have taken place in ... the past three or four years. ... It resonates with a lot of the things that have been happening today."

Attendee Alicia Cohen of Loudoun, Va., who is African-American, agreed. She remembered her father offering a similar sentiment to Douglass': "I remember when I was a little girl and, you know, how everybody gets really excited about July Fourth. And my father ... said, 'There's no reason to be excited about July Fourth.' He said, you know, that was not for us. And I was learning one thing from home and one thing from school, and I was conflicted. ... And my dad, although he was a smart man, he didn't necessarily articulate it the way Frederick Douglass did, but he felt the same way."

Douglass' speech is as much a brutal accounting of national hypocrisy on what he referred to as a day of "tumultuous joy" as it is a call to action. Douglass, indeed, wished for the Fourth of July to be celebrated — and viewed the Founding Fathers as figures to be exalted in national memory saying, "I cannot contemplate their great deeds with less than admiration. They were statesmen, patriots and heroes, and for the good they did, and the principles they contended for, I will unite with you to honor their memory."

But, Douglass continued, "your fathers, who had not adopted the fashionable idea of this day, of the infallibility of government, and the absolute character of its acts ... they went so far in their excitement as to pronounce the measures of government unjust, unreasonable, and oppressive, and altogether such as ought not to be quietly submitted to." Douglass noted the tone of complacency that had overtaken the country just 76 years after the Declaration of Independence. He chastised the politicians of the hour but noted that the ultimate responsibility rests on the shoulders of the citizens, not the government.

The fervent call to action is one of the most compelling and salient parts of the speech, said University of Maryland literature professor Bob Levine. "Part of the power of the speech is tapping into an American ideology and arguing that there is a powerful reform side to American ideology," said Levine, who specializes in American and African-American literature and is the author of The Lives of Frederick Douglass, "and that, history can change — things can change. Or else he wouldn't have given the speech."

After his address in Rochester, Douglass sold 700 copies of the speech on the spot, Levine said.

Picture This: Frederick Douglass Was The Most Photographed Man Of His Time

Picture This: Frederick Douglass Was The Most Photographed Man Of His Time

Douglass' call for, "not light that is needed, but fire; it is not the gentle shower, but thunder. We need the storm, the whirlwind, and the earthquake" is echoed in contemporary activism — by citizens and by some politicians — as the two major parties remain bitterly divided over a legislative agenda and just about everything else.

The biting and, at times, violent political rhetoric of today did not explicitly come up during the July 3 event. But, Levine said, sitting on a flight of marble stairs in the Archives, "the kind of eruption of racism in the culture, the [legitimization] of racism in the culture is precisely what makes today's speech all the more powerful." He added, "As I was signing books ... an African-American woman said to me, 'Do white people understand black people? Do they understand our relation to July Fourth?' So, if she can ask that question on July 3, 2017, then Douglass' speech from July 5, 1852, is still highly relevant."

Abigail Censky is an intern with NPR's Washington Desk.