Accessibility links
Book Review: 'Made For Love' By Alissa Nutting Alissa Nutting's new novel has a deviant instinct that makes it fascinating at first — but after a promising start, it falls back on shallow sex slapstick rather than authorial skill.

After A Wild Start, 'Made For Love' Stumbles

After A Wild Start, 'Made For Love' Stumbles 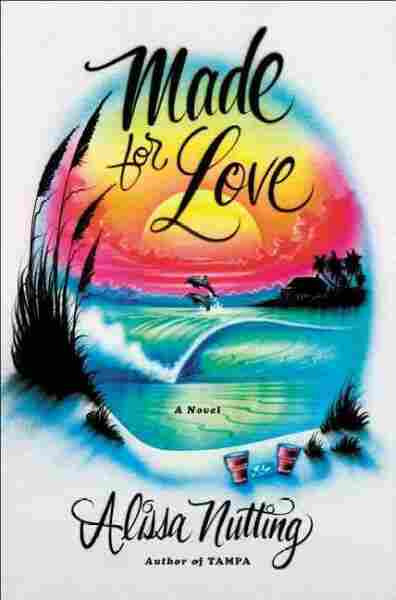 Alissa Nutting's plots arrive with all the irrepressible, grotesque flamboyance of a flasher at a funeral. Her last novel was the nauseating but addictive story of a female sexual predator. Her latest, Made for Love, opens with the protagonist, Hazel, arriving at her father's trailer to find him cohabitating with a sex doll named Diane, "the kind designed to provide a sexual experience that came as close as possible to having sex with a living (or maybe, Hazel thought, a more apt analogy was a very, very recently deceased) female."

Hazel is not there willingly: She's fled the chilly embraces of her husband, tech mogol Byron Gogol, of Gogol Industries, who wants to have a chip put in her brain that will give him access to all her thoughts, "like a file share thing," according to Hazel. Byron, whose skin feels "refrigerated," calls it an opportunity "TO FULLY NETWORK WITH YOUR BELOVED SPOUSE." Hazel's story is interspersed with that of Jasper, a former con artist who had a freak accident that left him only attracted to dolphins.

Intimacy exists for these characters only by proxy. Hazel's father has his sex dolls, Hazel falls asleep nestled with a plastic lawn flamingo, Jasper gets off on dolphins, Byron uses some sort of orgasm machine, a man Hazel sleeps with has a job as a substitute grave sitter for people whose relatives can't be bothered.

This kind of slapstick-with-a-dash-of-seminal-fluid relies on readers finding bodies/injuries/sex/fluids inherently funny, not on the author's skill.

"Do you know how when people are really hungry they will be driven to eat the inedible? Grass and soil and the like?" Hazel asks. "That also happens with love. If you want love badly enough, you will start gobbling harmful substitutes like attention and possessions." But the real truth is a little thornier, a little queasier; the characters in this novel sometimes choose grass over food. They use stand-ins because intimacy with real humans leaves them indifferent or repulsed.

That's the setup, which, for all its toomuchness, is seeded with promising ideas about intimacy, need, projection, and surveillance. But these ideas are never more interesting than in their first iterations. The novel's opening is satisfying: Hazel and Byron's courtship plays out as a perfect parody of Fifty Shades of Grey, and Nutting mocks wealthy tech culture with scorching glee. (Hazel, seeing a bowl of something she thought might be something as normal as snacks on his table, finds instead "small white rocks alight on a bed of flame.") But after this sketch of lurid alienation, the rest of the novel relies on the outrage of the premise when it should tease out these conceptual underpinnings.

If we're going to have nudes, let's make them live ones.

Good satire locates some bone-deep but unarticulated aspect of our human experience and whips the veil off of it when we least expect it. It's like charisma — some inexplicable combination of timing and electricity. Whereas Nutting introduces an ostensibly crazy concept (sex with dolphins!) very plainly at the outset, and then simply shades in the details. Her humor is not antic, mischievous, fleet, or unexpected — just shocking. Take, for instance, the long sequence where Hazel's arm is trapped in Diane's orgasm-optimized throat. This kind of slapstick-with-a-dash-of-seminal-fluid relies on readers finding bodies/injuries/sex/fluids inherently funny, not on the author's skill.

Made for Love has a deviant instinct that make it initially captivating — but it doesn't do the necessary other work of a good novel. For all the ostensible unexpectedness (again, dolphins), it rarely surprises. And, for all that it plays on the idea of intimacy, the book gives us little sense of why we might want it, if people are just screens for mishap and absurdist sex. If we're going to have nudes, let's make them live ones.