Accessibility links
Police Fatalities On The Rise More police have been killed on the job in 2017 than at the same time last year. Seven of the 67 police fatalities so far this year, have been in New York. 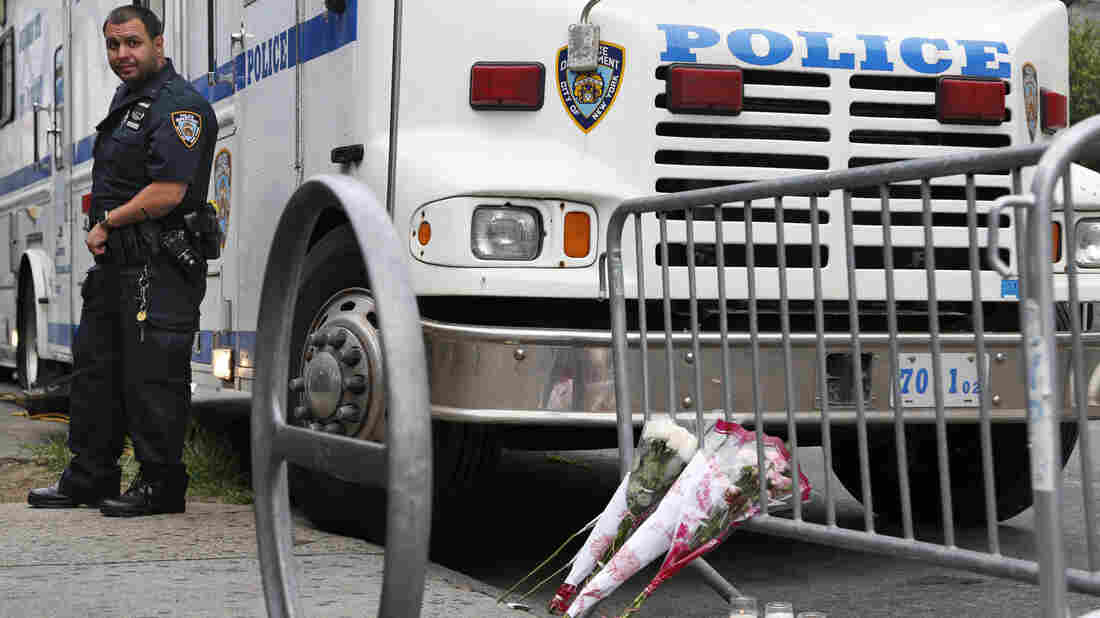 A police officer stands near the site where Officer Miosotis Familia was killed. Familia was shot to death early Wednesday, ambushed inside her command post by an ex-convict, authorities said. He was later killed after pulling a gun on police. Seth Wenig/AP hide caption 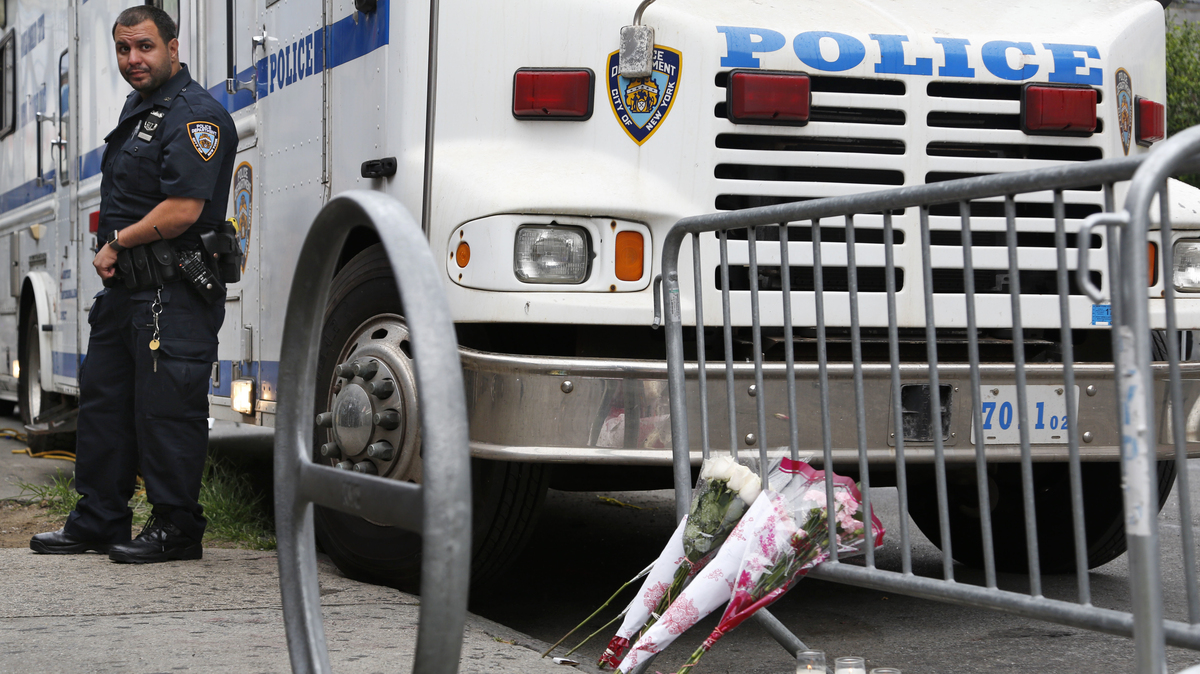 A police officer stands near the site where Officer Miosotis Familia was killed. Familia was shot to death early Wednesday, ambushed inside her command post by an ex-convict, authorities said. He was later killed after pulling a gun on police.

The New York City neighborhood where a gunman walked up to a truck-like mobile police command vehicle early Wednesday and shot into a window killing Officer Miosotis Familia, is in a high-crime area of the Bronx.

Authorities say they are still working to identify the shooter's motive, but still, Familia's death stunned residents such as Liz Fabers.

"Did she deserve to die, hell no, nobody shouldn't walked up on her and just killed her," she says.

Nick Bruel, safety director for the National Law Enforcement Memorial Fund, says there's been nearly an 18 percent jump in the number of police killed on the job since last time this year.

"New York is right now at the top of the list in terms of states that have suffered line-of-duty deaths," he explains.

Seven of the 67 police fatalities so far have been in New York, and of that 67, more than a third died from gunshot wounds.

City officials in New York are calling Familia's death an assassination. Police Commissioner James O'Neill says the 48-year-old was on the force for 12 years and working her normal midnight shift, sitting in the command vehicle writing in a notebook, when the shooting occurred.

"She was doing the job that she loved, keeping this great city safe," he says.

Police identified 34-year-old Alexander Bonds, an ex-convict, as the shooter. He posted a video on Facebook last September railing against police, but had no previous contact with Familia. He died after police officers caught up with him and fatally shot him.

It was a chilling deja vu for New York. In 2014, a man shot and killed two officers sitting in a police car before killing himself. Then-police commissioner William Bratton called those deaths an assassination.

Last year there was a marked increase in law enforcement fatalities. In Dallas, five police officers died in an ambush after a peaceful protest march over deadly police shootings was at its end. In Baton Rogue, La., Gov. John Bel Edwards, spoke out after two officers and a sheriff's deputy were killed, calling it "a diabolical attack on the very fabric of society." Last fall, two policemen in Iowa died in separate ambush attacks.

While the number of line-of-duty deaths has been on the decline since the 1970s, police say protests and investigations have left them demoralized.

"When you see someone that's making threats doing something against police officers, you need to let us know, you need to be our eyes and ears," says Pat Lynch, the head of New York's Patrolmen's Benevolent Association, expressing outrage over this latest police fatality.

And Bruel says a Justice Department initiative focuses in part on increasing safety for officers during ambush attacks.

"There are manufacturers who are now trying to come up with more protective materials for officers who are seated in cars, to make them less vulnerable in certain circumstances," he says.

New York's new patrol cars do have bulletproof glass, but in the final analysis, says Bruel, there may not be much that can be done except to make officers be very aware of their surroundings.