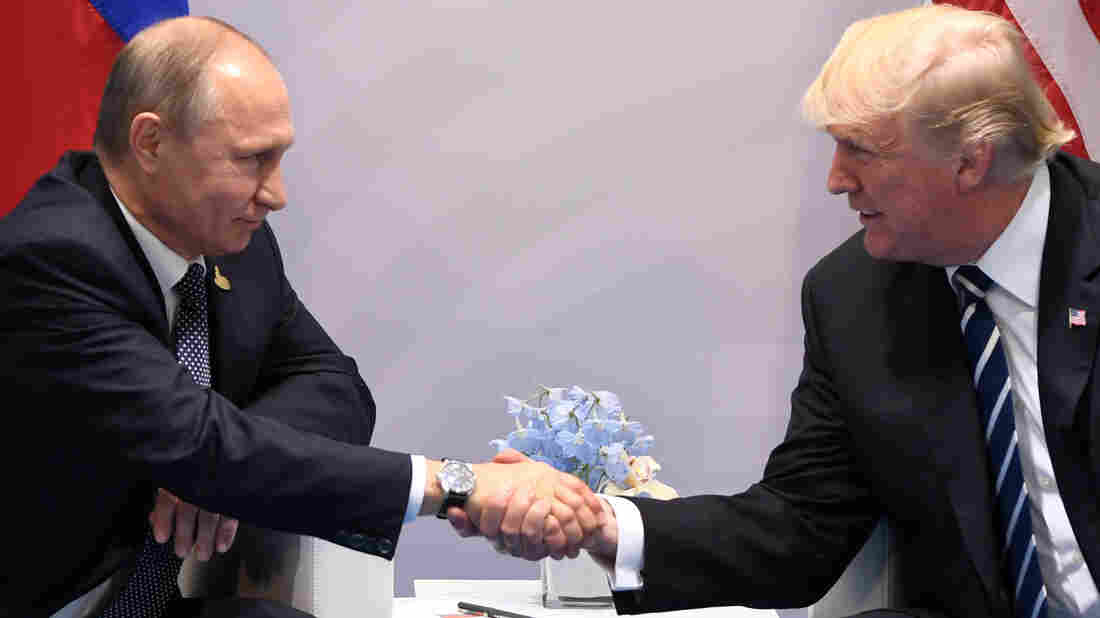 President Trump and Russian President Vladimir Putin shake hands during a meeting on the sidelines of the Group of 20 summit in Hamburg, Germany, on Friday. Saul Loeb/AFP/Getty Images hide caption 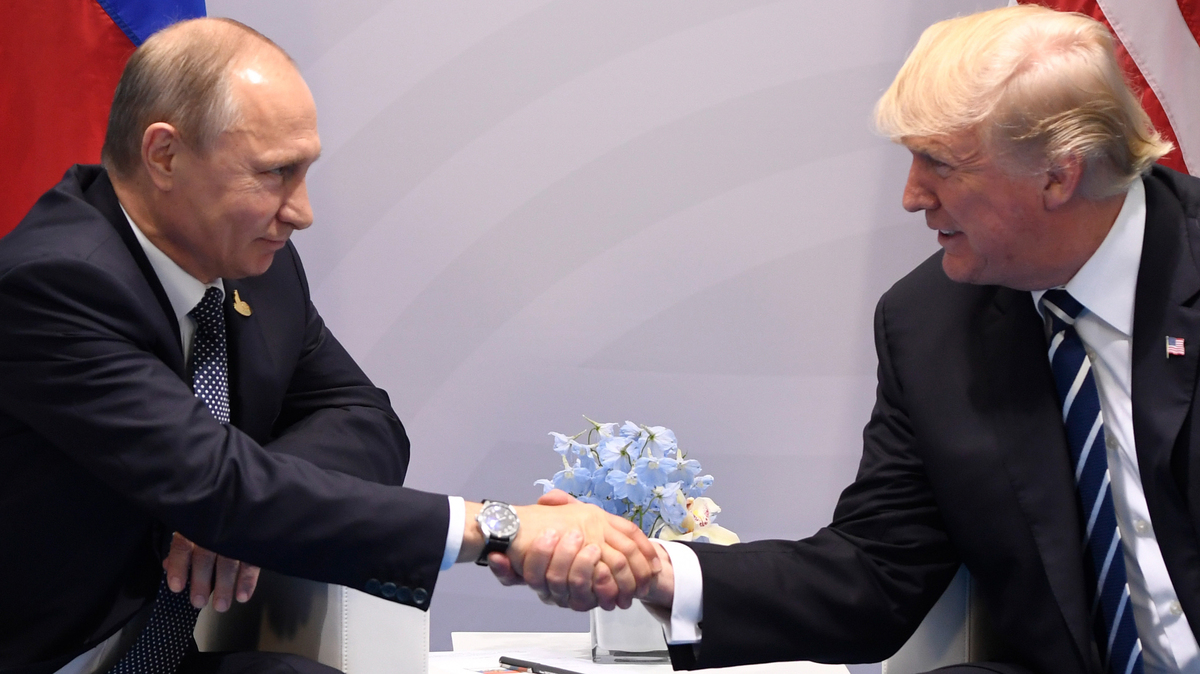 President Trump and Russian President Vladimir Putin shake hands during a meeting on the sidelines of the Group of 20 summit in Hamburg, Germany, on Friday.

Trump opened the more than two-hour meeting "by raising the concerns of the American people" about Russia's meddling in last year's presidential race, according to Tillerson. Trump and Putin had a "robust and lengthy exchange on the subject," the secretary of state said.

As he has done in the past, Putin denied involvement in any meddling in the election.

Trump and Putin agreed, however, that the issue of election interference was a substantial hindrance in their ability to move the U.S.-Russia relationship forward. The two world leaders also agreed to work on further commitments of noninterference in the affairs of the United States and in the democratic process in the U.S. as well as in other countries.

There is "more work to be done in that regard," Tillerson said.

The top U.S. diplomat spoke Friday at a press briefing after Trump held his first official meeting with Putin. Trump and Putin exchanged a warm handshake in a brief interlude with reporters and photographers before their meeting began.

"President Putin and I have been discussing various things, and I think it's going very well. We've had some very, very good talks," Trump told reporters before the meeting. "We're going to have a talk now and obviously that will continue, but we look forward to a lot of very positive things happening — for Russia, for the United States, and for everybody concerned. And it's an honor to be with you."

The two men were scheduled for a 30-minute meeting on the sidelines of the Group of 20 Summit in Hamburg, Germany, but ended up talking almost five times that long.

Beforehand, Putin mentioned that they have talked already a few times over the phone.

"But phone conversation is never enough," he said through a translator. "If we want to have positive results in bilaterals and be able to resolve most acute international topics and issues, definitely we need personal meetings.

"And I'm delighted to be able to meet you personally, Mr. President, and I hope, as you have said, our meeting will yield positive results for Russia and the U.S."

The two presidents were joined in the meeting by their translators and by Russian Foreign Minister Sergey Lavrov and Tillerson.

Speaking from Hamburg on Russian state TV, Lavrov said Trump "heard President Putin's clear statements that it's not true the Russian leadership intervened in the election, and that he accepts those statements."

Tillerson told reporters that his interpretation of the exchange was that the two men agreed on the need to move past the issue of election interference. The secretary of state said the focus is now on how the U.S. secures a commitment that Russia has no intention of interfering in U.S. elections in the future — and how the Trump administration creates a framework to judge whether Russia is keeping that commitment.

Last month, Putin told international journalists in St. Petersburg that it's possible that "patriotic" Russian hackers outside of his government might be trying to engage in cyberattacks against the world's democracies. "I must stress, on a state level, we are never engaged into these kind of activity," said Putin at the time, according to a media report.

The U.S. intelligence community has unanimously concluded, however, that Russian intelligence services did interfere with "active measures" including cyberattacks, social media bots and other techniques — and that they did so at Putin's direction.

The majority of the meeting, Tillerson said, was spent parsing out details of a cease-fire in southwest Syria that between the U.S. and Russia. Jordan and Israel are also part of the deal. A state-run news agency in Jordan reported that the cease-fire would go into effect on Sunday.

Putin and Trump also discussed the increasing threat posed by North Korea. Earlier this week, that country tested an intercontinental ballistic missile, which showed the theoretical potential to reach Alaska.

"I would say the Russians see (North Korea) a little differently than we do," Tillerson said. "We're going to continue those discussions and ask them to do more. Russia does have economic activity with North Korea. But, I would also hasten to add, Russia's official policy is the same as ours: a denuclearized Korean peninsula."

Friday's warm meeting between the two leaders also came just a day after Trump spoke in Poland, a country known for its distaste for Russia, and reiterated America's commitment to Article 5 of the NATO charter.

"The United States has demonstrated not merely with words, but with its actions, that we stand firmly behind Article 5, the mutual defense commitment," he said.

The statement would not have been newsworthy if not for Trump's decision in May to omit a line in a speech that reaffirmed the U.S. commitment. That decision raised eyebrows especially in Eastern Europe, as Putin has shown in Ukraine and Crimea that he is intent on projecting Russia's power and influence in Europe beyond his country's borders.

While Friday's meeting was the first time the two men have met since Trump became president, it's unclear whether they've met in person before.

In an interview in 2013 with David Letterman, the Late Show host asked Trump whether he had met Putin before.

But in 2016, Trump seemingly began to backtrack on that claim. In July, he told a CBS affiliate in Miami, "I never met Putin, I have nothing to do with Russia whatsoever."

He reiterated that at a news conference that month, too.

CNN put together a list of 80 times Trump talked about the Russian president over the past four years, which gives insight into how his rhetoric has and hasn't changed.

Compared with predecessor President Barack Obama, however, Trump has been noticeably warmer toward Russia. Whereas Obama once mentioned the threats posed by Ebola and "Russian aggression" in the same sentence back in 2014, Trump has repeatedly talked about wanting to improve relations with Russia.

What Putin Wants From His G-20 Meeting With President Trump

On Friday, the two presidents hit it off immediately, Tillerson said.

"There was a clear positive chemistry between the two," he added. "There was such a level of engagement and exchange, neither one of them wanted to stop."

He said that at one point the first lady was even sent into the meeting to try to persuade them to finish up, but "that didn't work either." They continued talking for another hour.

That is good news for many Americans. According to a recent NPR/PBS Newshour/Marist poll, 46 percent of adults view Trump's goal of improving relations as a mostly good thing, whereas 41 percent view it as a mostly bad thing.