Accessibility links
Book Review: 'Queen of Bebop' By Gwen Thompkins Elaine M. Hayes' new book traces the ups and downs of the singer known as the Queen of Bebop, from her great Town Hall debut in 1947 to the cheesy but profitable novelty songs that marred her legacy. 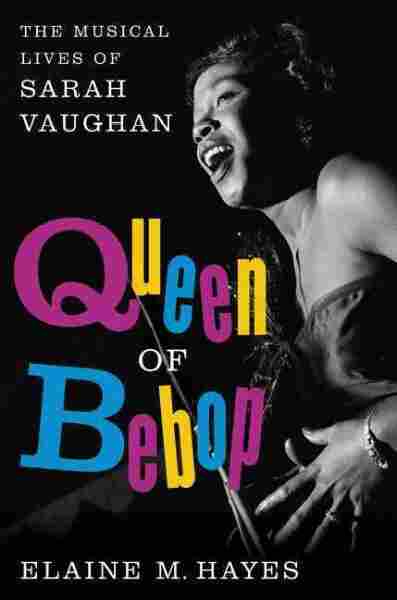 It's somehow fitting that a biography of Sarah Vaughan would emerge during the centennial of Ella Fitzgerald. That's been Vaughan's story from the get go. The brilliance of her instrument was, is and ever shall be compared to Fitzgerald's — the First Lady of Song, the darling of rhythm, the swinging-est singer on record.

Vaughan was born in Newark, N.J. in 1924, seven years after Fitzgerald. But in jazz, seven years — and particularly those seven — were a lifetime. That's how fast the music was changing. Or, more accurately, that's how fortunate music lovers were. The Queen of Swing and the Queen of Bebop sat concurrently on their thrones in the same lifetime. Each dipped her royal feet in the perpetual spring of pop music, and each paid a price with the critics for doing so. There were others, of course, but Fitzgerald and Vaughan were among the few who belonged on top.

Queen of Bebop, by Elaine M. Hayes, begins with a now familiar story in American music: The girl singer awaiting her history-making debut at an elite performance space in New York City. Vaughan first sang at Town Hall in 1947, following the sublime tenor saxophonist Lester Young on the program. Young, who'd played with Count Basie, and most memorably Billie Holiday, was an intimidating act to follow, but Vaughan managed nicely. In five songs or less, she introduced the well-heeled music lovers of Town Hall to a concept that had boggled the minds of her fellow musicians and touring audiences for some time. "It had not occurred to them that the human voice could be used this way" Hayes writes.

Hayes is at her best when describing Vaughan's talent this simply. Her understatement, like a time-release capsule, packs a — wait for it, wait for it — KABOOM. That's the kind of discipline needed to describe the aural calligraphy Vaughan brought to jazz, and why instrumentalists — who famously disliked girl singers — made an exception for her. It was that voice. That voice! Four octaves as supple as warm taffy pouring out of a saucepan.

'Queen of Bebop' adds detail to aspects of Vaughan's life that confounded even her most besotted fans.

Queen of Bebop depicts Vaughan as a musician's musician, tougher than the rest. As a singer and piano player, she took to the challenging structures of bebop as if she'd made up the modes herself. Her ballad singing, especially, could tempt any swing dancer to sit down and listen to the arrangement.

But it was Vaughan's hardiness off stage that made her one of the guys. Hayes quotes any number of sidemen who said so — in the Earl Hines band, Billy Eckstine's and in Vaughan's own ensembles. She swore and carried her own travel bags — like the guys. She smoked — like the guys. And she drank and stayed high on a variety of drugs — just like they did. But then she would pack herself into a form-fitting gown and present to an audience like a perfect parfait. As Hayes writes, Vaughan kept it up until 1990, when lung cancer killed her.

That's the plot and there are no spoilers here. But Queen of Bebop adds detail to aspects of Vaughan's life that confounded even her most besotted fans. The music critics, disc jockeys and promoters who championed her work early on became frustrated with Vaughan the jazz singer vs. Vaughan the pop singer.

Vaughan's novelty recordings, which even she reportedly despised, widened her audience and her commercial appeal. But songs like Broken-Hearted Melody and De Gas Pipe She's Leakin' Joe put her more in league with the novelties of Doris Day than with singers mentioned in the best jazz circles.

Hayes paints a picture of a self-possessed woman who, contrary to her nature, caved to the dictates of bad contracts and tiny-hearted industry executives. Not until the final stages of her career did Vaughan take control of her legacy. But, for many, the damage already had been done.

Queen of Bebop explores the hard choices of many a jazz singer when rock 'n roll began stealing audience focus, relying on a variety of performers to shed light on Vaughan's mindset.

Vocalist Billy Eckstine, for instance, unleashing on jazz purists who sneer at commercial pop music. "So I saw one of those creeps, a jazz critic, and I said, 'What are you, mad at me because I want to take care of my family? Is that what pisses you off?'" Eckstine says in the book. "You want me to wind up in a goddamn hotel room with a bottle of gin in my pocket and a needle in my arm, and let them discover me laying there? Then I'll be immortal, I guess, to you.'"

But Hayes offers little fresh insight into controversial decisions over which Vaughan had complete control — particularly in the hiring of inexperienced husbands and lovers to represent her in business. Vaughan rarely, if ever, spoke publicly on the matter and, as a storyteller, Hayes struggles with her subject's apparent silence. Like many performers, Vaughan was reluctant to be interviewed in-depth or at length. As a result, she's remote on the page — just out of reach. But her shyness and impatience with the press may have given critics undue influence in shaping her reputation in perpetuity.

"In their fervor to condemn her pop records ... jazz critics neglected her live performances," Hayes writes. "They overlooked what she did night after night, for hundreds and often thousands of listeners."

The breadth of Vaughan's career supports that statement. But Hayes — a devotee — cannot fully address the most damning criticism: That for all the technical merit Vaughan displayed — perhaps the greatest vocal range of this or the last century — she could not always connect with her listeners emotionally.

'Queen of Bebop' is a welcome and well-researched accounting of Vaughan's life story. It's also a testament to the singularity of her talent.

"I admire her, but she doesn't move me," Hayes quotes the much-celebrated poet and New Yorker jazz writer Whitney Balliett. "I have to be moved." While Balliett was underwhelmed by virtually all female jazz singers, he was not alone in his assessment. Hayes also describes producer John Hammond — an early Vaughan fan, who also helped introduce the world to Billie Holiday, Bob Dylan and Bruce Springsteen, among others — pointedly reading the newspaper while ringside at Vaughan concerts in New York.

It's not easy to counter that kind of emotional argument. Either a listener feels that a singer has communicated what a lyric has to say, or doesn't. In music, the transporting factor is, by nature, mysterious — difficult to define, or predict. Queen of Bebop suggests that these criticisms may have added to Vaughan's feeling under-appreciated near the end of her astounding career.

In June of 1989, when Vaughan saw festival producer George Wein in her dressing room at Carnegie Hall — she wanted to know only one thing: "Why do you pay Ella more than you pay me?"

Queen of Bebop is a welcome and well-researched accounting of Vaughan's life story. It's also a testament to the singularity of her talent. But perhaps the book's greatest accomplishment will be more ears on Vaughan's music – her nickname wasn't The Divine One for nothing. As her centennial approaches, now is an excellent time to listen anew.

Gwen Thompkins is a writer in New Orleans and host of public radio's Music Inside Out.