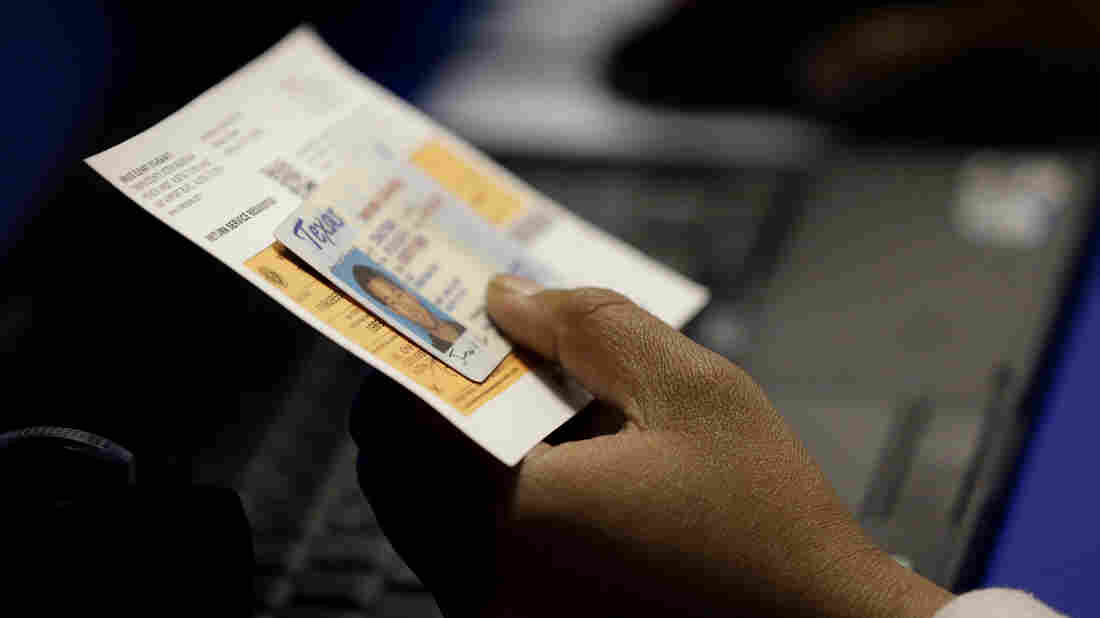 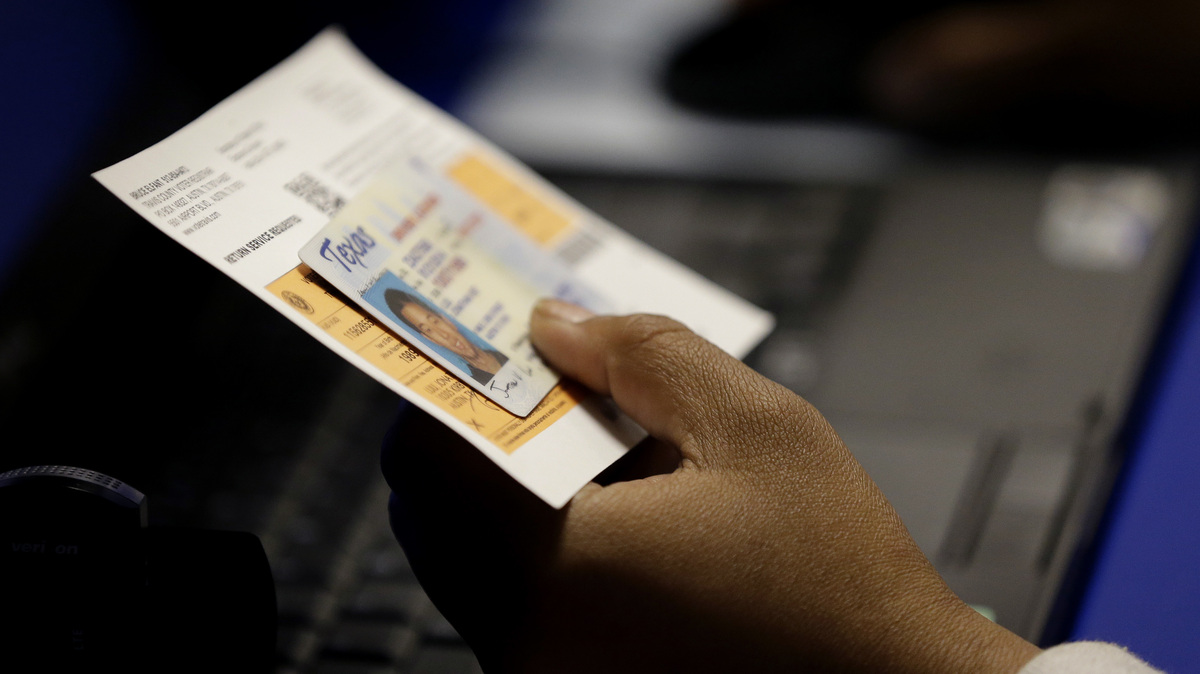 An election official checks a voter's photo identification at a polling site in Austin, Texas.

Lost in the uproar last week over a written request by a White House commission for state voter registration lists was another letter sent that same day. It came from the civil rights division of the U.S. Justice Department (DOJ), and asked states for details on how they're complying with a requirement in the National Voter Registration Act (NVRA) — also known as the motor-voter law — that election officials keep their voting lists accurate and up to date.

The timing and focus of the two letters — one from the commission and the other from DOJ — has made some voter advocacy groups nervous about what the Trump administration is up to, and whether its ultimate goal is to weaken or revamp the motor voter law.

"It's very concerning," said Brenda Wright, vice president of policy and legal strategies at Demos, a liberal advocacy group that's been fighting state efforts to purge voters from the rolls. Wright notes that the main purpose of the motor voter law is to expand opportunities to register to vote, but that millions of eligible Americans are still unregistered.

"The problems that DOJ should be focusing on are that too few eligible people have access to the vote and are voting. DOJ going after states to force them to do more purging is exactly the opposite of what the department should be doing," she said.

It's not clear how the DOJ request might be linked, if at all, to the commission's work — although both are focused on concerns that voter rolls are bloated with outdated or inaccurate registrations, including for those who have died, moved or are otherwise ineligible to vote.

In an interview last week with NPR, the commission's vice chair, Kansas Secretary of State Kris Kobach, said one reason they've requested state registration records is that he'd like to compare them with federal databases to see if any non-citizens or deceased voters are listed. He noted previous estimates that almost two million dead people are still registered.

"We can also look at voter history and see how many of those two million ... fraudulently, someone cast a vote in their name, after the date of death," Kobach said.

But many election experts and voter advocacy groups say such matching efforts are flawed, and often produce false positives. They worry that it could lead to legitimate voters being taken off the rolls, and efforts to impose more voting requirements in the name of preventing voter fraud.

Kobach is one of the few officials who agree with President Trump's allegations that such fraud is widespread. Kobach has also argued that the motor voter law adds to the problem by making it difficult to take ineligible people off the rolls.

"When you've got a system that allows people to mark, 'No, I am not a citizen,' and still get registered to vote, that system is broken," Adams said.

He was referring to cases where an individual applying for a driver's license is allowed simultaneously to register to vote, one of the key provisions of the motor voter law. Sometimes non-citizens end up registering, often by accident, and their name might remain on the rolls for awhile because the law protects against removing names too quickly so that eligible voters aren't mistakenly purged.

President Trump has called the problem of messy voter rolls "a really bad situation" and cited a 2012 Pew report that found millions of inaccurate registrations as one reason he wanted to establish the commission to look into voter fraud.

David Becker, who now runs the Center for Election Innovation and Research, was the author of the Pew report and said states could do more to clean up their voter rolls and get rid of inaccurate registrations, especially for those who have moved or passed away. He estimated there could still be hundreds of thousands, maybe millions, of outdated registrations.

But, he added, "I think also, very importantly, we know from the extensive research on voter fraud, that those people aren't voting."

Becker, a former DOJ attorney, also wonders about the timing of the two letters to states seeking information about their voter rolls, and whether it's a sign of coordination between the Justice Department and the voting commission on what to do about the motor voter law.

He says the DOJ letter, especially, seems to indicate a shift in focus from enforcing provisions intended to expand registration to those requiring list maintenance.

A DOJ spokesman said in a statement that the department sent the letters because it hasn't reviewed what states and localities are doing to maintain their voting lists under the NVRA for many years and "looks forward to working with state and local election officials to facilitate appropriate list-maintenance activities toward our common goal of free and fair elections for all voters."

For his part, Kobach said the presidential commission will follow the facts where they lead, and that he has no idea what, if anything, the panel will recommend.