Accessibility links
Book Review: 'Tropic of Kansas' By Christopher Brown Christopher Brown's new book plays out in a world where all our fears have become manifest — the nightly news, turned up to 11. And while there's a hint of hope at the end, this is not a happy book. 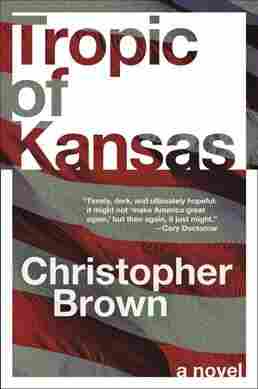 In the vast galaxy of science fiction, it is always three minutes 'til doomsday.

There is always some monster, some alien warlord, some catastrophe so imminent that no one has time to pee. Lives are always on the brink. More than ray guns, more than starships, this is the defining characteristic of sci-fi literature. Disaster, within and without.

And as has been said a thousand times by critics far smarter than me, there is nothing that happens in science fiction that is not a reflection of our own grubby reality. We have been afraid of nuclear war, of environmental calamity, of technology, plague and politics and the enmity of our fellow man, and these dreads have always made their way into our entertainment. The worse the days, the more baroque the diversions. And these days are very bad indeed.

Tropic Of Kansas is like a modern dystopian buffet. It plays out in a world where all of our terrors have become manifest — climate change, wealth disparity, terrorism, an authoritarian government in power suppressing its own citizens, corporate control of everything from food to media. It is, in this particular moment in history, frighteningly prescient. It is the nightly news with the volume turned up to 11.

'Tropic Of Kansas' is like a modern dystopian buffet ... It is, in this particular moment in history, frighteningly prescient. It is the nightly news with the volume turned up to 11.

And none of this is better typified than in the opening scene, which deals with illegal border crossers being deported back to their country of origin across a walled and heavily fortified border. Except that, in this case, the people being deported are American citizens and the border is with Canada.

Brown tells his story of righteous revolution through two lenses. The first, Sig, is a wild thing — child of a revolutionary mother, raised around armed insurrection, and half-a-swamp-rat himself. He is a creature of woods and rivers, more comfortable sleeping rough, tracking deer, living on garbage and stolen clothing. He's got a weird double-strand of DNA running through him, part John Rambo, part reality TV.

The second is Tania, a government employee with rebellion in her heart; who exemplifies the living pulse of dystopia because she is simply existing within it. She has a job, an apartment. She hates the state of the country and the president (a cartoon villain, who comes from a military-industrial background and is so patently, obviously evil that his own Vice President tried to assassinate him) but does nothing about it until one day she shouts at him, is detained and strong-armed into working for the Tropic Of Kansas equivalent of the FBI and Homeland security. Her job? Tracking down Sig, who — once upon a time — was her brother.

There's nothing pretty in Brown's future. Nothing purely good. But at the close, there is a spark of hope that things can get better.

Things get complicated, like things do. The narrative bounces back and forth between Sig (who quickly rises to folk hero status as some of his violent anti-government exploits get captured by security cameras and broadcast to the revolution fomenting all across the nation) and Tania on a one-to-one basis — short, choppy chapters that track them from Washington to the upper Midwest, through the Tropic of Kansas (a wasteland made by robot farms, agribusiness, poverty and national terrorism) and down into New Orleans. From about the hundredth page forward, you know how it is all going to go down.

But Brown, to his credit, uses the pages given to him to paint a frighteningly believable portrait of an American future that is closer than you want it to be. He sketches small-town fury and ultra-super-uber-right-wing nationalism in detail, showing a Midwest overrun by uniformed bullies in armored pick-ups, watching the movie star who plays the president in a series of action movies that are thinly disguised propaganda films and flying surveillance drones over million-acre farms sucked dry by corporate greed. He details the movements of his protagonists, but spends nearly as much time detailing the movements of the rebellion, describing communications networks and revolutionary cells, underground meetings and daring raids against government forces. That's the porn part. The wish fulfillment. The dreaming of (nearly) impossible things.

But by the end of things, he snaps back to reality. The finale is bloody, violent, quick and messy, like revolution always is. There's nothing pretty in Brown's future. Nothing purely good. But at the close, there is a spark of hope that things can get better.

At least for those who survive the violent delights that come before.

Jason Sheehan knows stuff about food, video games, books and Starblazers. He is currently the restaurant critic at Philadelphia magazine, but when no one is looking, he spends his time writing books about giant robots and ray guns. Tales From the Radiation Age is his latest book