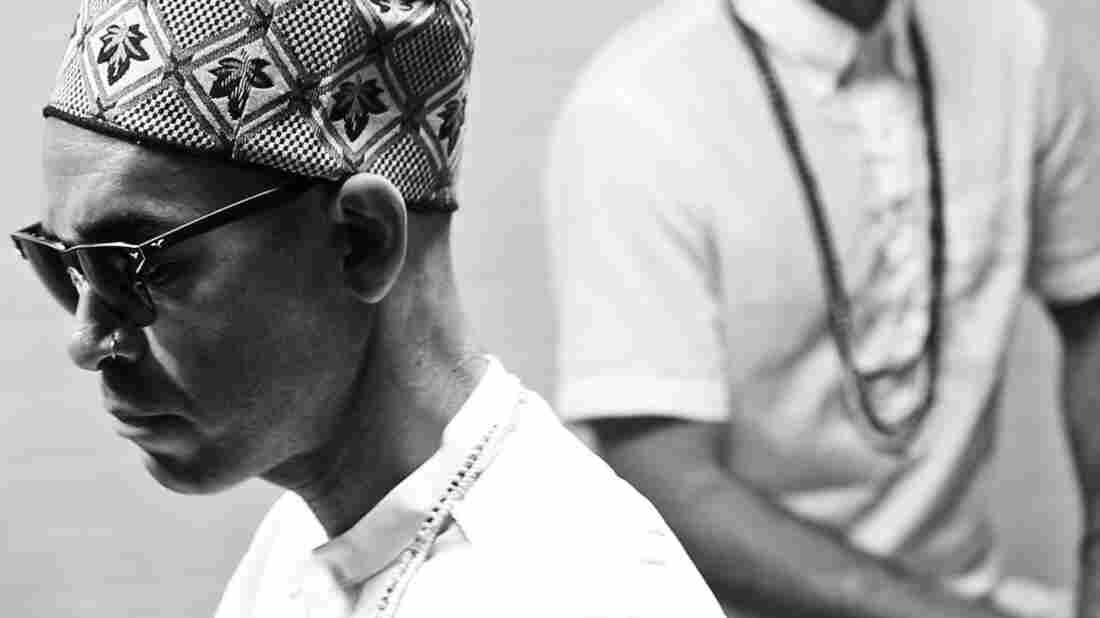 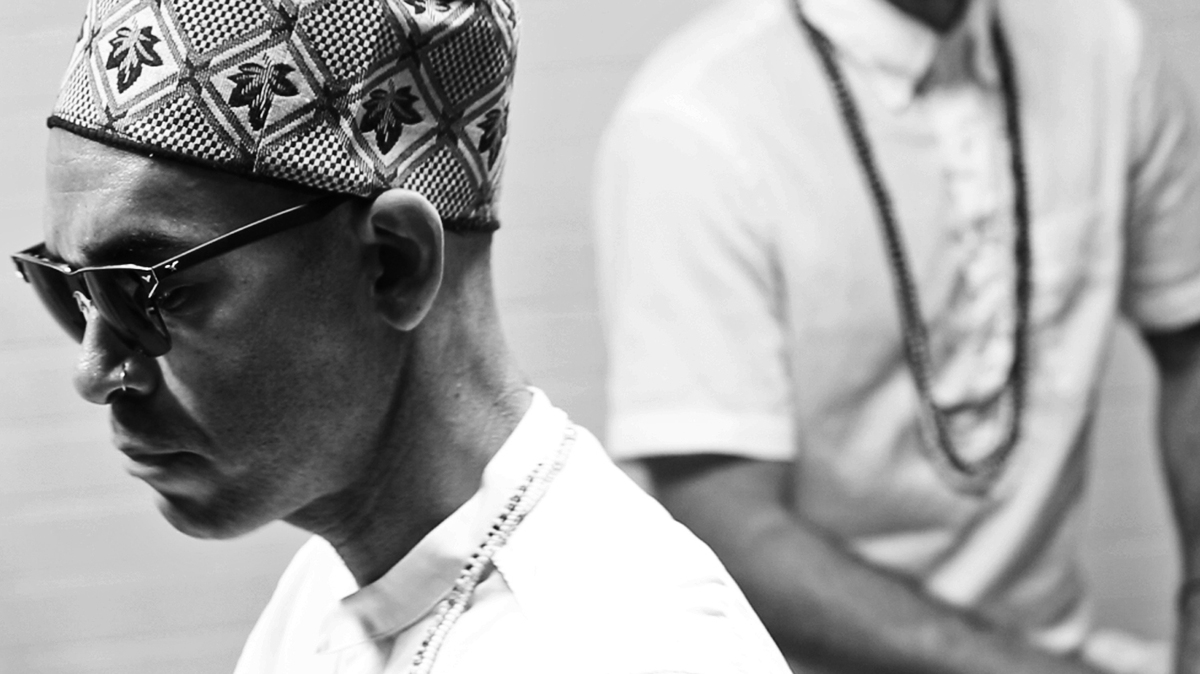 Otura Mun started out in the world as Mark Underwood, a Goshen, Ind., native whose parents were Mennonites and who managed to snag a coveted spot on the University of North Texas' drumline. But that was before a flight mixup landed the percussionist, composer, DJ and producer with a free trip to Puerto Rico. Two years later, he moved permanently to the island, became a Yoruban high priest and began creating electronic music that channeled the African diaspora.

These days, Otura Mun leads the Afro-Caribbean ensemble ÌFÉ, whose debut album is called IIII + IIII (pronounced "Edgy-Og-Beh"). He spoke with Weekend Edition Sunday guest host A Martínez about his remarkable story, the way his spirituality and music intersect and his myriad influences — from drumline to video games. Hear their conversation at the audio link, and read on for highlights.

Meet Me At The World Cafe: ÌFÉ Performs Live In Philadelphia

On how playing with the UNT drumline shapes his music today

I think now, coming back to ÌFÉ, what you see is a bit of the same concept ... in the sense that playing in a drumline, you sort of become anonymous. You're playing and trying to synchronize with the drummers that are around you, playing together to be able to make a higher expression, or a larger expression happen as a whole. ... There's room for improvisation and there's room to express yourself. But it's a group experience that's making something higher happen.

On how he came to move to Puerto Rico, and the cultural adjustment that demanded

At the time I was studying at the University of North Texas, I would travel back and forth from there to Indiana, and in '97 Delta kind of bust one of my flights and they gave me a voucher. Being from a lower-middle class family, the idea of travel on my own dime just didn't really occur to me. And so all of a sudden I had this plane ticket that was good for anywhere in the U.S., the Caribbean and South America. At the time I was really getting into Jamaican dancehall. And so I sat on the tickets for 11 months, called the airline in '97 and said, "Hey, I wanna go to Jamaica." They sort of batted that one away and said the only places they went in the Caribbean were St. Thomas, St. Croix and Puerto Rico. St. Thomas, nope. St. Croix, nope. All booked up. Puerto Rico was the last thing open. And so I just jumped on it. I wanted to see what the Caribbean was about.

And I just really enjoyed the experience that I had there, culturally. I mean, being from Indiana and being African American, it's just — the U.S. is a tough place to be black, let's put it that way. ... The things that I assumed about my relationships with other people, how they saw me, how I should understand them, even before having a conversation — were sort of deconstructed in Puerto Rico to a certain extent. Because the folks there don't necessarily build their identity on race first, like we do in the States. ... I think I took the way that I moved through the world with me to Puerto Rico and sort of had to find another way to move.

On the connection he felt with the Yoruba religion

In '99 I was booked to DJ a sort of millennial party in St. Thomas. And one of the groups that was also booked was a rumba group and most of the rumberos that were there were santeros or practicantes of the Yoruba religion. And then there was also a Nigerian drummer and dancer that was booked at the same party. ... And the Puerto Rican rumba group and the Nigerian got along really well, musically, because the Puerto Ricans were singing in Yoruba, and the Nigerian spoke Yoruba and he could understand them completely. He was really kind of blown away. He said, "Hey, you guys have an accent that sounds like my great-great-grandfather." And as an African American, seeing these guys from Puerto Rico being able to communicate directly on a spiritual level, on a musical level, with someone from the continent in such a profound way, was just very impacting for me.

In this practice, the idea of praying without singing, or singing without dance, just doesn't really exist. I think that's kinda what people are feeling, in some ways, when they listen to the ÌFÉ record — there's that deep sense of spirituality imbued into the music in a way that whether you understand English, Spanish or Yoruba, you're going to get a sense of what we're trying to get across, because the meaning and intent behind the words and the chants are so powerful.

On what he brings to traditional Yoruba devotional singing

Many of the songs and chants that are on ÌFÉ's record came through meditations about the particular orishas [divinities that interface between humans and the supreme being] themselves. ... And I was lucky enough in the writing process to be befriended by a gentleman named Emilio Barreto, who's probably the most famous singer in santería ceremonies in New York in the last 30 years. He just sort of walked into my studio randomly as I was writing the record. And so Emilio immediately sort of got what I was trying to do, on a musical end, with triggering these drums and reflecting on the energies of each orisha.

"Bangah" is a good example because I had sampled a knife sound or a sword strike from the video game Assassin's Creed. Now, Ogún is understood as the god of war in the Yoruba pantheon, and his main tools are the machete and the anvil. ... I wanted young kids to be able to identify or hear themselves in the sounds on the record, and so I chose new electronic sounds. ... So I took that sword strike — "Sha-keeng" — and hopefully kids are gonna get it. Now, Emilio heard it, and he heard it as the sound of Ogún's sword, which I meant it to be, but it also sounded like a word, which is "Bangah!" and that's part of a song for Ogún. And so he was able to help me get the song I needed, at the moment I needed it, into the music itself.

On debates surrounding cultural appropriation and the Yoruba faith

For me, race is another box, another source of confinement. I didn't choose to play that game. ... White Europeans are the winners in that game. They made it up, they defined it. And so I'm trying to shed those layers as much as possible, with all respect to the struggle that I'm a part of.

This is a practice that was waiting for me because of the trans-Atlantic slave trade, but it's a practice that anyone can gain from. ... The practice is powerful for everyone. I'm nobody's judge and jury either, man. If my neighbor, who ended up being a crack addict — [who] was a white kid — was able to find peace and guidance inside of this religion, more power to him. I mean, I'm never gonna try and hold anybody back from evolving as a person, as a human being. No one's going to hold me back either.