Accessibility links
Cities Grapple With Confederate Symbols Two Years After Charleston's Flag Came Down A Confederate flag came down at the South Carolina Statehouse weeks after the murders of nine people at a historically black church. Such symbols continue to generate controversy. 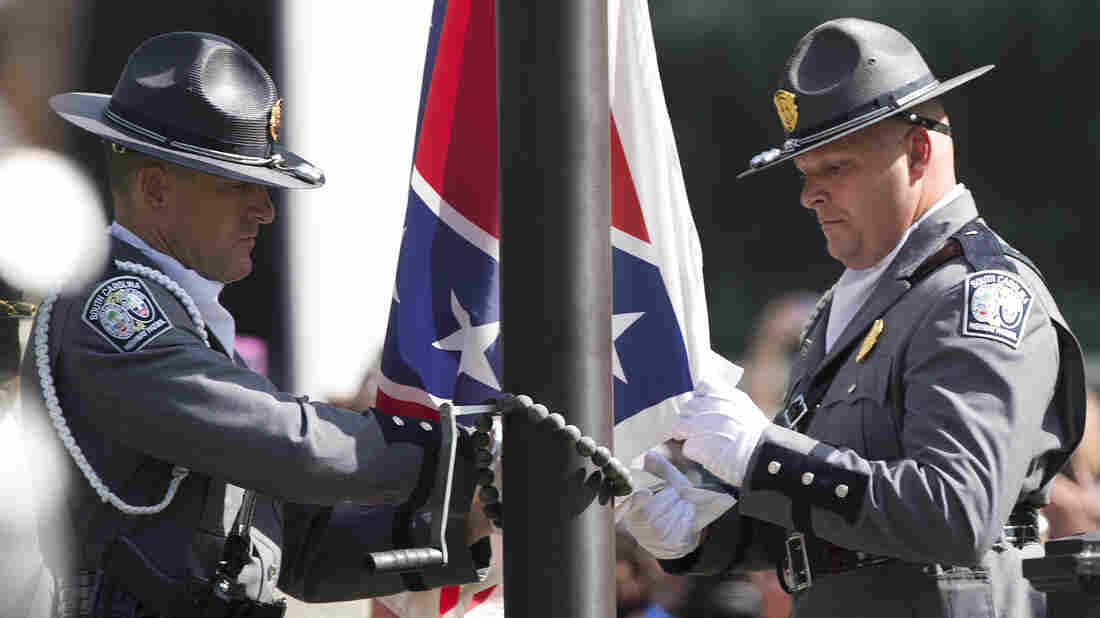 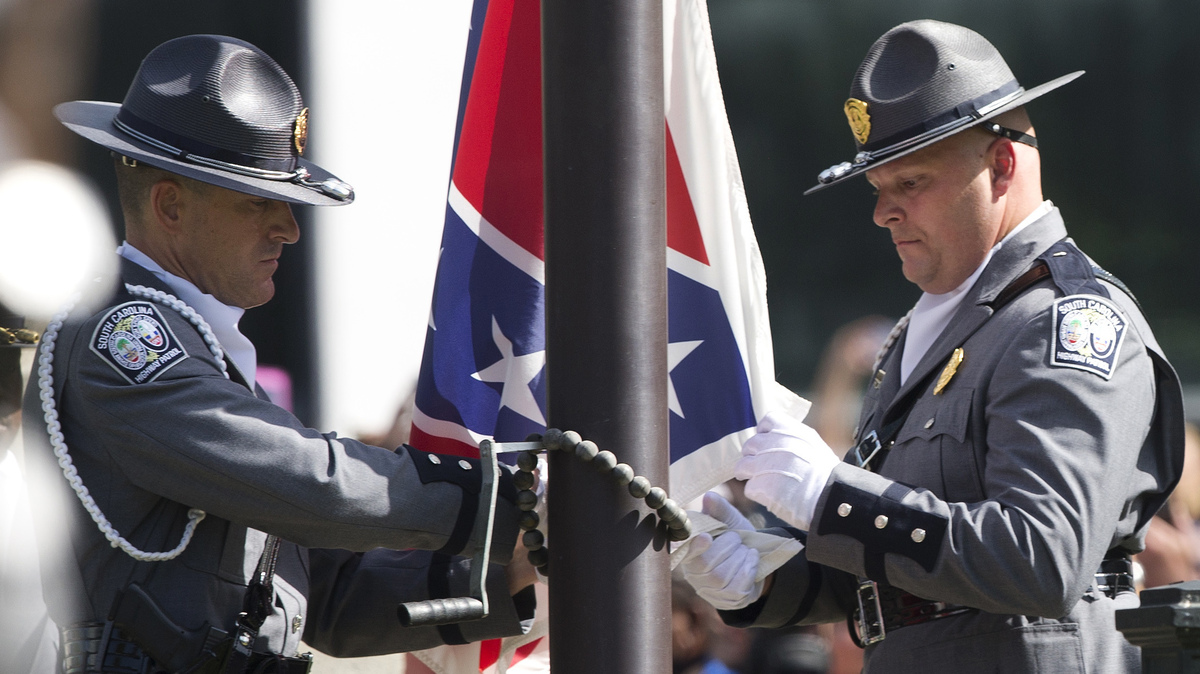 Under a clear sky on July 10, 2015, the Confederate flag that had flown on the South Carolina statehouse grounds since the Civil Rights era came down. That decision by state leaders — called for by black activists — followed the murders of nine people at a historically African American church in Charleston by a white supremacist who'd been photographed posing with the Confederate flag. 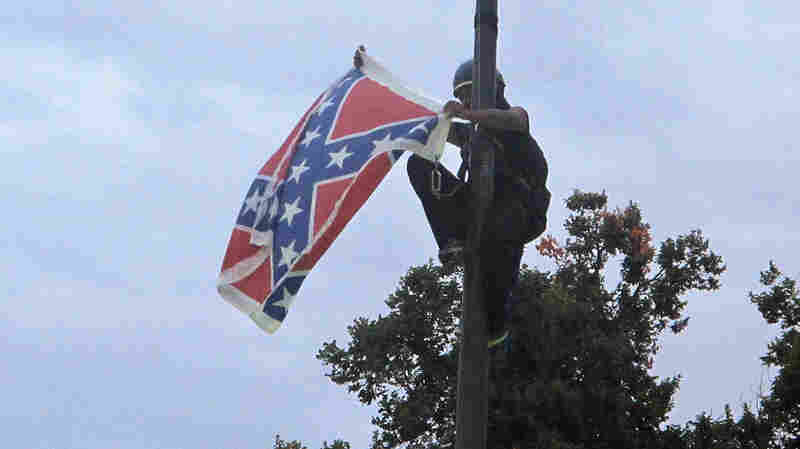 Activist Bree Newsome scaled a flagpole and removed the Confederate flag from a monument at the Statehouse in Columbia, S.C., following a deadly shooting at a historically black church in Charleston. The flag was officially removed from the grounds days later on July 10. Bruce Smith/AP hide caption 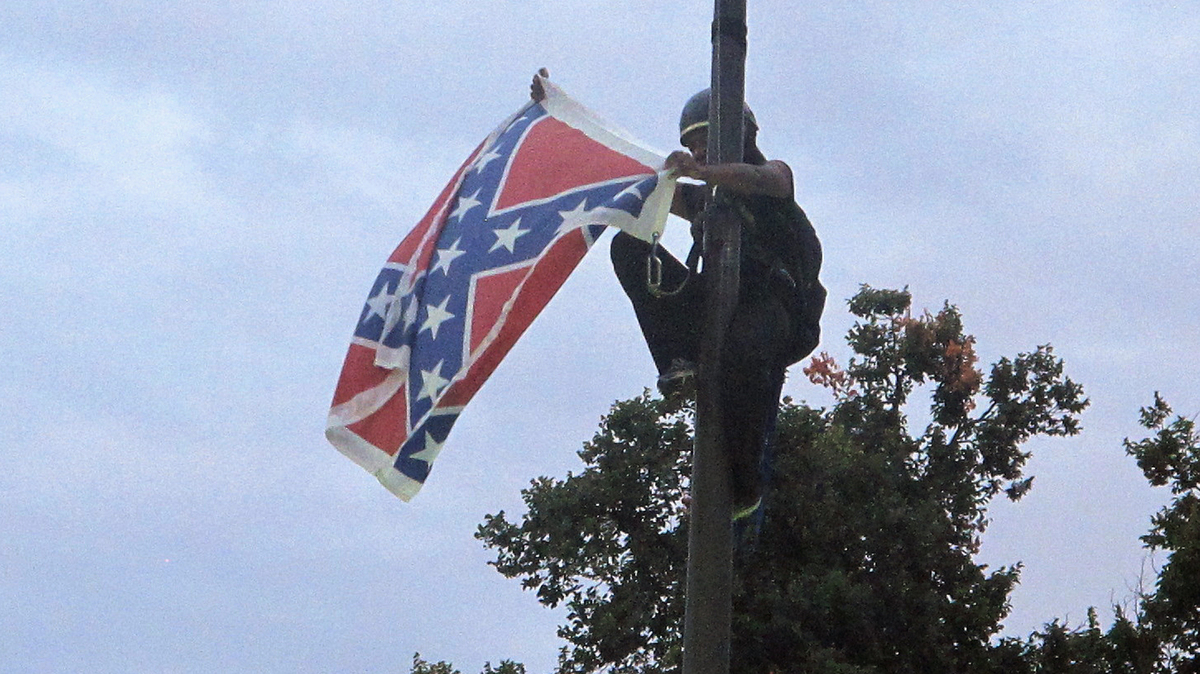 Activist Bree Newsome scaled a flagpole and removed the Confederate flag from a monument at the Statehouse in Columbia, S.C., following a deadly shooting at a historically black church in Charleston. The flag was officially removed from the grounds days later on July 10.

Since then, cities across the South – and beyond – have been grappling with what to do with their Confederate symbols. Here's a look at some of the places that have seen major public debate over Confederate memorials in recent months:

One of the most controversial decisions happened in New Orleans, where four monuments honoring the Confederacy and white supremacy came down earlier this year after tense protests. That decision was supported by New Orleans Mayor Mitch Landrieu — the city's first white mayor in more than 30 years.

"This is a history we should never forget and one that we should never, ever again put on a pedestal to be revered," Landrieu said in a speech praising the monuments' removal.

Over the weekend in Charlottesville, Va., about 1000 counter-protesters surrounded a few dozen KKK members who'd come to town to demonstrate against the planned removal of a statue of Confederate General Robert E. Lee. That was just the latest of several local disputes and over the issue. 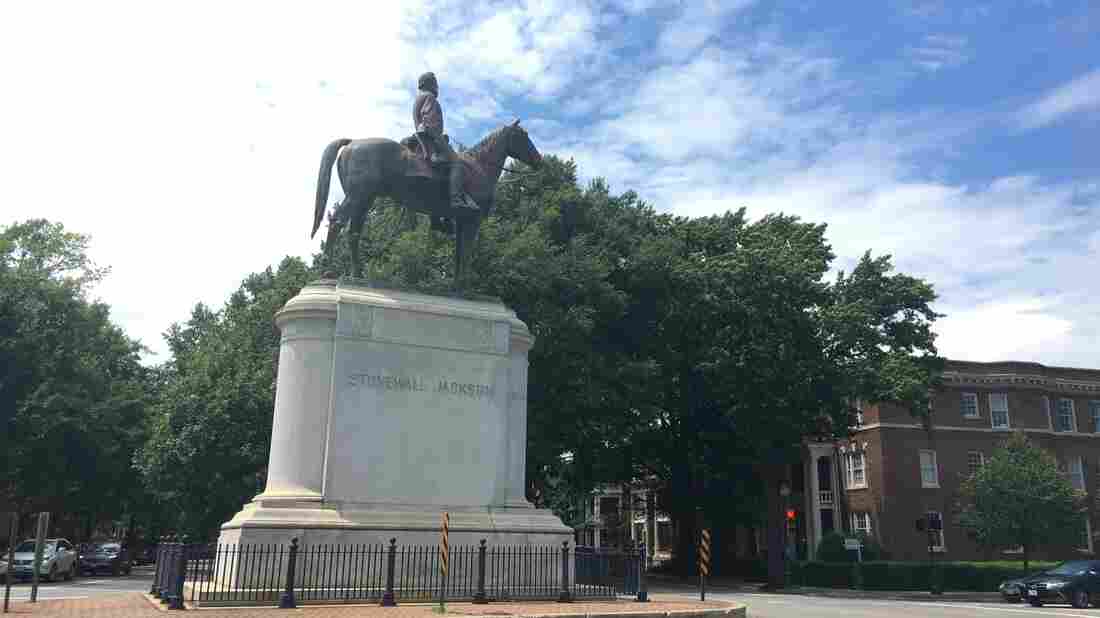 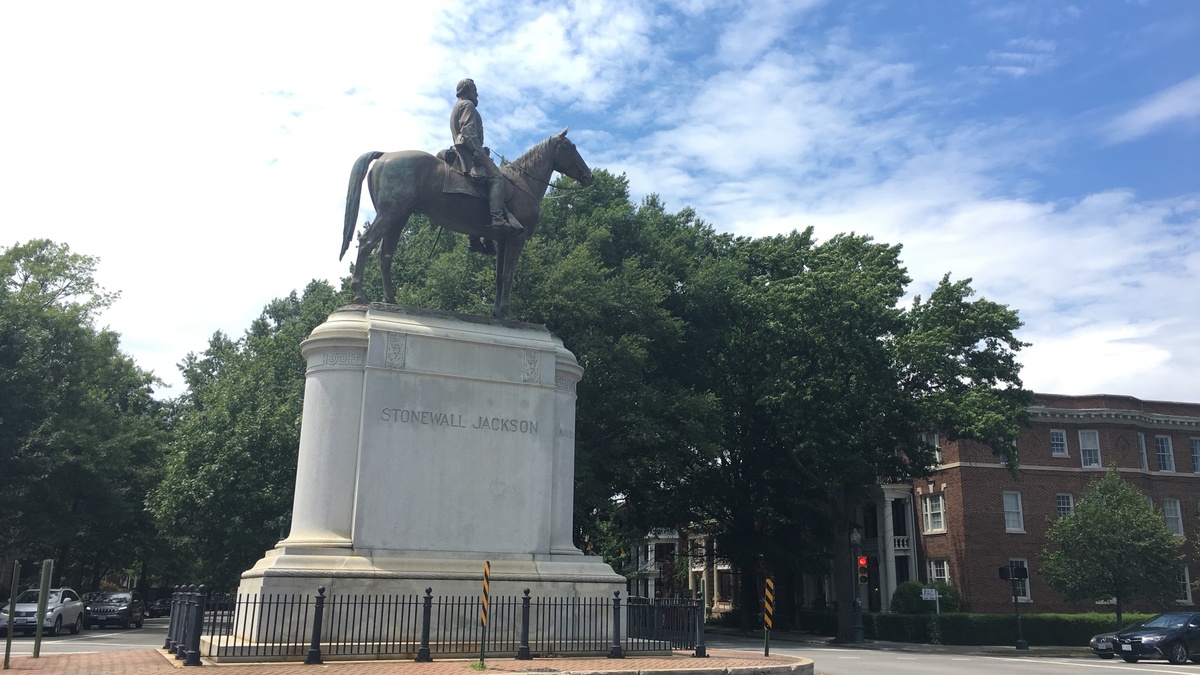 In one of the former capitals of the Confederacy – Richmond, Va. – the city's young, African-American mayor is trying to compromise. Mayor Levar Stoney recently created a commission charged with finding ways to contextualize memorials to Confederate leaders like Jefferson Davis and Robert E. Lee that line Monument Avenue, a stately historic street downtown.

"Removing monuments doesn't change race relations in our city; I'm just as insulted by those statues as anyone else," Stoney said at a press conference discussing the commission. "But what I'm most insulted by is the fact that those statues currently stand up there without telling an ounce of the truth."

Baltimore's Mayor, Catherine Pugh, has said she also wants to explore removing the city's monument to several Confederate leaders. Her predecessor, Stephanie Rawlings-Blake, had ordered interpretive signs to be placed alongside the monuments, a move she described as a short-term solution at the time. 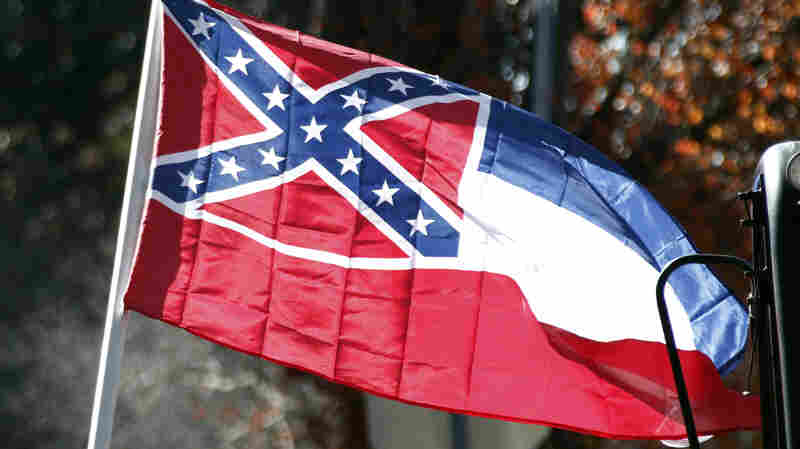 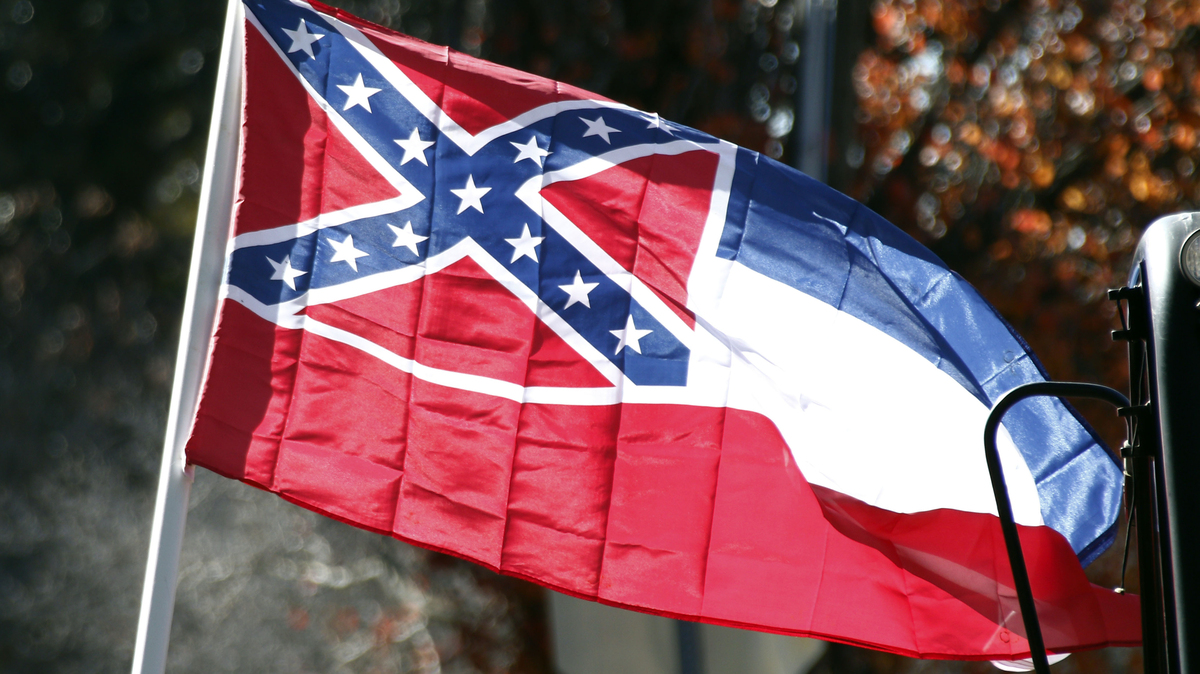 Mississippi's state flag still incorporates a Confederate battle symbol into its design. For that reason, the city of McComb recently stopped flying the flag – over some local objection. A black Mississippi resident, Carlos Moore, is challenging the flag in court, arguing that it is a symbol of white supremacy. And the University of Mississippi announced this month that it will put up a sign recognizing that some campus structures were built by slaves.

In Norfolk, Va., in late May, someone spray-painted the word "SHAME" in giant letters across the city's monument to the "Confederate Dead," which is positioned prominently downtown.

Rayla Young of Virginia Beach was walking by as a city crew cleaned off the paint. Young, who's African-American, said she's resigned to the statue's presence.

"I just walk past it like I don't even see it ... Of course it hurts, but I mean, there's nothing that I can do to tell anybody to take it down," Young said.

Steve Turner, a white construction worker from North Carolina's Outer Banks, was also passing by. He said there's no need to stir up controversy about things that happened in the past.

"I mean, everything's offensive nowadays. It doesn't matter what you do or what you say, it's still offensive," Turner said. "But it's American history – it should be left alone."

"I hate to say it, but you know, it's getting so bad we are the minority now ... white people are," he said. "Since Obama took over, back then, that's what created all this crap right now."

Whatever cities do with their Confederate symbols, there will still be deeper racial issues for the nation to confront. Brandy Faulkner, a political science professor at Virginia Tech who studies race and public policy, also points to President Obama's election as a turning point that sparked racial resentment among some white Americans.

"We like to think that we've made so much progress in this area, when in fact we haven't made very much at all. And what happens is the level of resentment grows depending on the visibility of progress," Faulkner said. "So with the election of Barack Obama, we had, for the every first time, a visible symbol of the nation that was African American, and I think it was a shock for so many people."

Faulkner says taking down monuments, or adding context to the ones that stay up, may temporarily settle local debates – but the larger conversation about race in America is far from over.

"We have yet as a country to be honest that we are still having a race problem, and until we can have that discussion openly and honestly, I don't think there will be a resolution," Faulkner said.