Accessibility links
Donald Trump Jr. Tells Sean Hannity 'In Retrospect' He Would've Handled Russia Meeting Differently "I had been reading about [Clinton] scandals that people were probably underreporting for a long time, so maybe it was something that had to do with one of those things," Donald Trump Jr. told Fox. 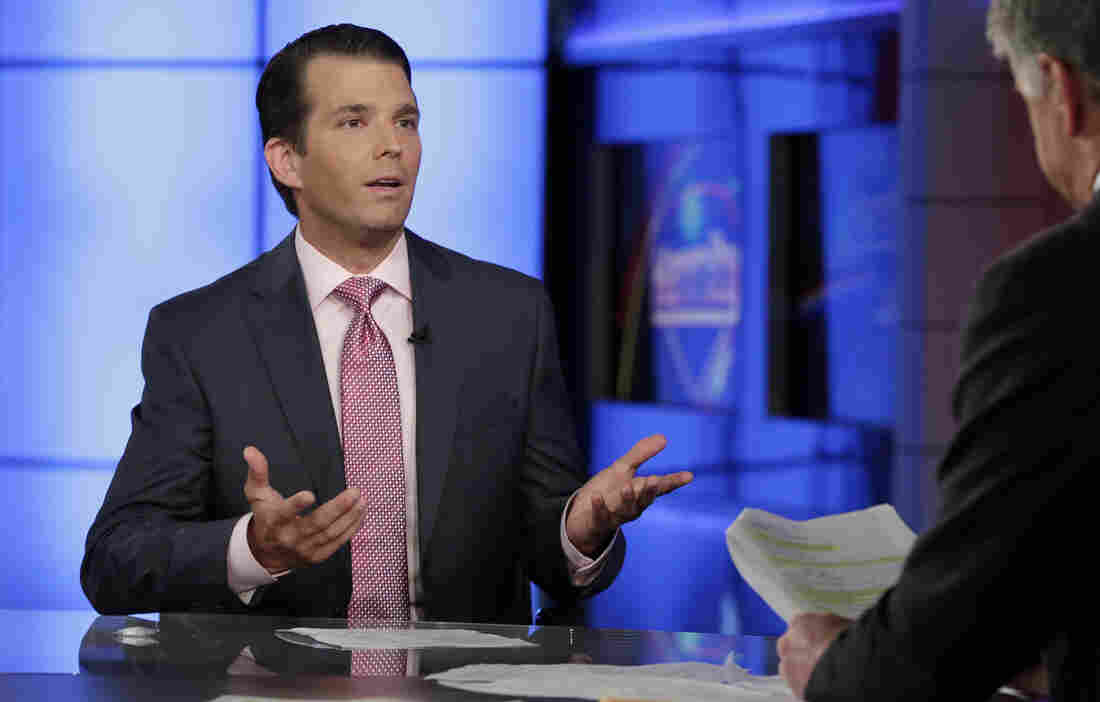 Donald Trump Jr. appears on Sean Hannity's Fox News program on Tuesday to discuss his meeting with a Russian lawyer in 2016 after promises of getting damaging information about Hillary Clinton. Richard Drew/AP hide caption 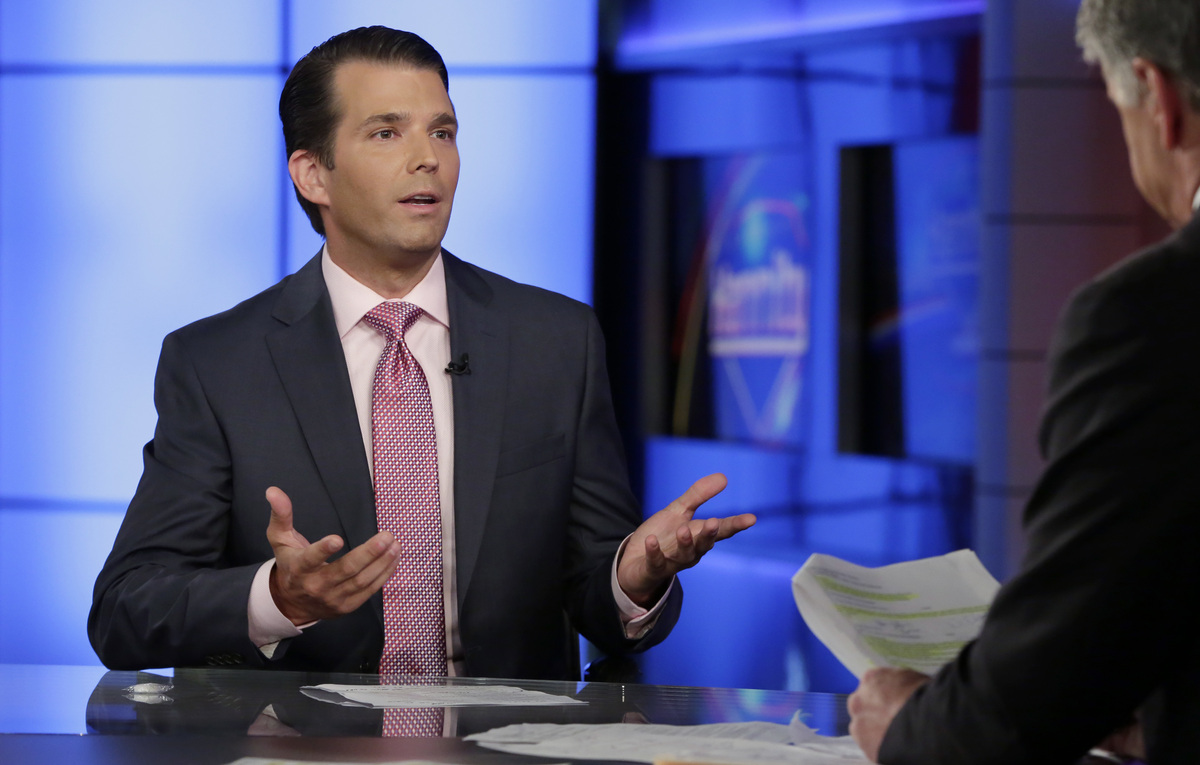 Donald Trump Jr. appears on Sean Hannity's Fox News program on Tuesday to discuss his meeting with a Russian lawyer in 2016 after promises of getting damaging information about Hillary Clinton.

Donald Trump Jr. acknowledged in an interview with Fox News on Tuesday that "in retrospect, I probably would have done things a little differently" when meeting last year with a Kremlin-linked attorney in hopes of gaining damaging information on Hillary Clinton.

In an interview with Fox News host Sean Hannity, President Trump's eldest son explained that he met with attorney Natalia Veselnitskaya at the urging of publicist Rob Goldstone because he "wanted to hear it out" to see what type of details they had.

"I had been reading about scandals that people were probably underreporting for a long time, so maybe it was something that had to do with one of those things," Trump Jr. said.

Goldstone described the information "that would incriminate" Clinton as "part of Russia and its government's support for Mr. Trump." He also described the woman Trump Jr. would later meet as a "Russian government attorney." Asked whether any "sirens" went off for him, Trump Jr. said, "Honestly, I don't know." He added it was "pre-Russia fever" and "pre-Russia mania."

"So I don't even think my sirens went up, or the antennas went up at this time, because it wasn't the issue that it's been made out to be over the last nine months, 10 months, since it really became a thing," Trump Jr. said.

He also characterized the meeting as a "courtesy" to Goldstone, a business acquaintance.

The president's son posted an email exchange about setting up the June 2016 meeting on Tuesday morning just before The New York Times, which initially broke the story of the meeting over the weekend, was about to publish the emails.

Trump Jr. reiterated that he was willing to cooperate with congressional committees that are investigating Russia and possible collusion with the Trump campaign, and he told Hannity that would include testifying under oath.

"I just want the truth to get out there," Trump Jr. said. "And that's part of why I released all the stuff today, I wanted to get it all out there."

Ultimately, the meeting — which was also attended by Trump's then-campaign chairman Paul Manafort and his son-in-law Jared Kushner, who now serves as a White House senior adviser — was a bust, Trump Jr. said. He added that Kushner left the meeting after about five minutes and Manafort spent most of the meeting on his phone.

"I wouldn't have even remembered it until you started scouring through this stuff," the president's son said. "It was literally just a wasted 20 minutes, which was a shame."

Trump Jr. also said he never told his father about the meeting, because "there was nothing to tell."

As to whether he has ever held additional meetings with Russians, Trump Jr. said, "I don't even know, I've probably met with other people from Russia ... not in the context of actual, a formalized meeting or anything like that, because why would I?"

In one of the June 2016 emails to Trump Jr., Goldstone said, "This is obviously very high level and sensitive information but is part of Russia and its government's support for Mr. Trump."

Trump Jr. wrote back, "if it's what you say I love it especially later in the summer."

Aside from the emails and meeting, Hannity focused much of his program on bashing the mainstream media, inviting Trump Jr. to do so as well.

As NPR's Peter Overby and Marilyn Geewax note, the situation has put Trump Jr. in legal hot water because there is a federal law that says "foreign nationals cannot 'directly or indirectly' give a 'thing of value' to American political campaigns. Moreover, the law says no one is allowed to 'solicit, accept, or receive' any thing of value from a foreign national to help a candidate."

The White House stood behind Trump Jr. on Tuesday as the controversy was unfolding, with White House spokeswoman Sarah Sanders reading a statement from the president saying, "My son is a high-quality person and I applaud his transparency." Ahead of the Hannity segment airing, Trump promoted the interview on his personal Twitter account, calling his son "a great person who loves our country!"