Accessibility links
Residents Of East Austin, Once A Bustling Black Enclave, Make A Suburban Exodus The community "doesn't really exist anymore as it did," one former resident of East Austin said. Even the local pastor, who served for 30 years, says he's been pushed out by rising home prices. 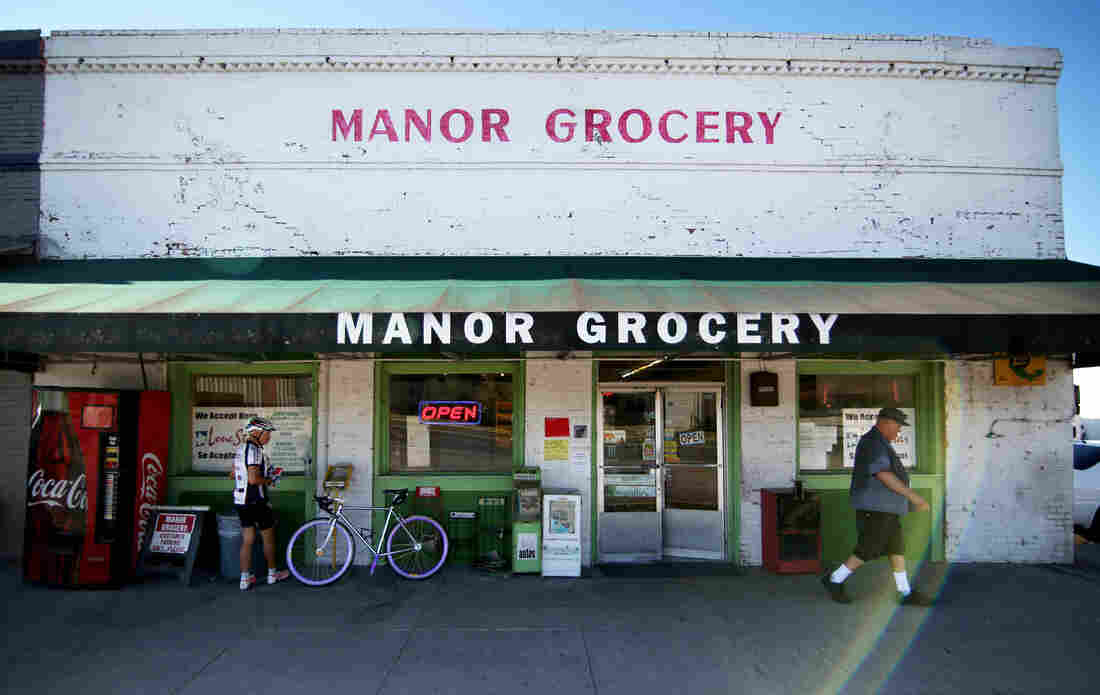 Many families who used to live in East Austin have relocated to nearby Manor, Texas. Jorge Sanhueza-Lyon/KUT hide caption 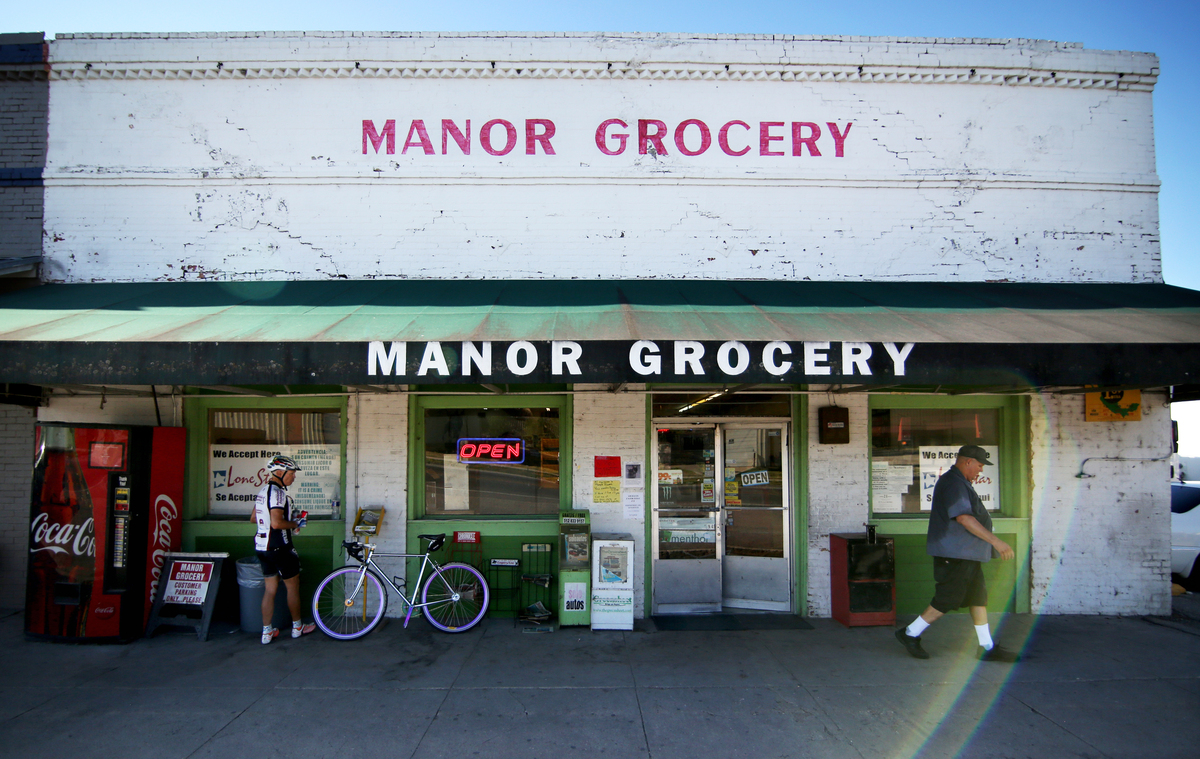 Many families who used to live in East Austin have relocated to nearby Manor, Texas.

On a Sunday in late April, Pastor Clarence Jones asked his congregation to join him.

"Oh magnify the Lord with me and let us exalt his name together. Congregation?" he said, his voice booming from the front of the church. Roughly 40 congregants seated in the pews responded: "I saw the Lord and he heard me..."

For 30 years, Jones has led the Greater St. John's Baptist Church in east Austin, the city's historically black neighborhood. The church has been here for more than 75 years.

"Back in 1944-45, somewhere in there, the members moved here, pitched a tent," said Jones. "And they worshiped in the tent until they was able to build this 'little port' right here."

This 'little port' is a small church on a corner lot in a residential neighborhood. The exterior white paint is chipped, and a steeple rises above the gabled roof. Around the time this church was built, single-story homes were cropping up around it. People like choir director Lisa Spearman have spent many Sundays in the area.

"I have belonged to this church since I was a little girl," said Spearman, who took over the job of choir director from her mother. "Maybe four years old." 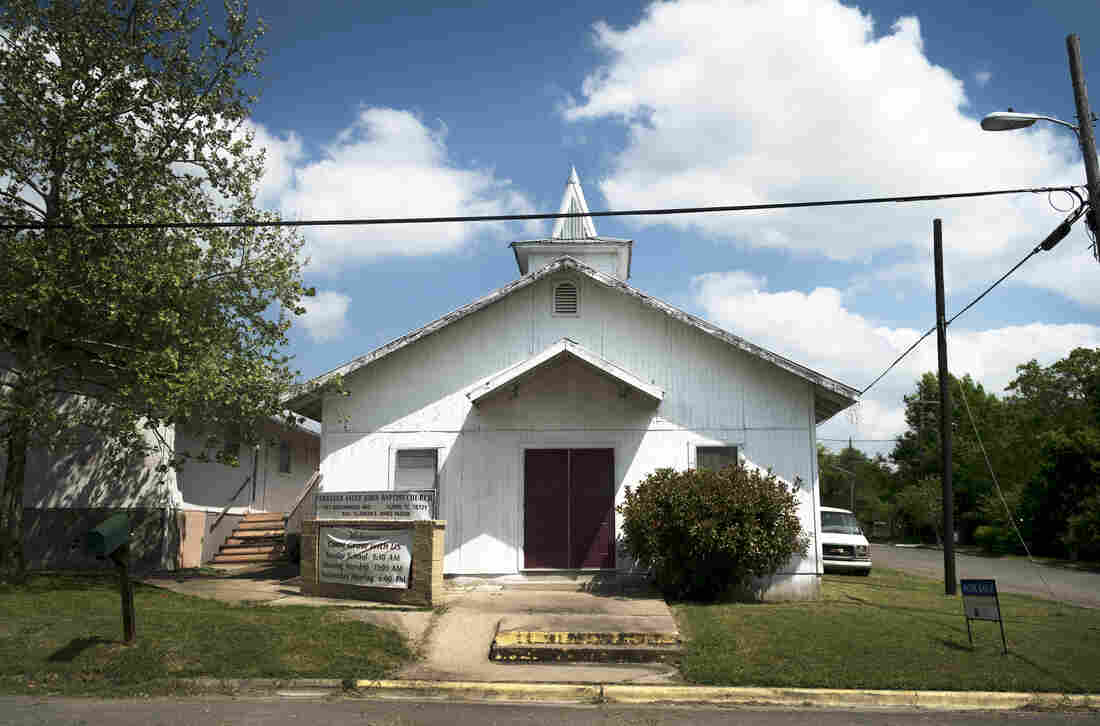 Greater Saint John Baptist Church, which has been in the East Austin neighborhood since 1945, is for sale. Jorge Sanhueza-Lyon/KUT hide caption 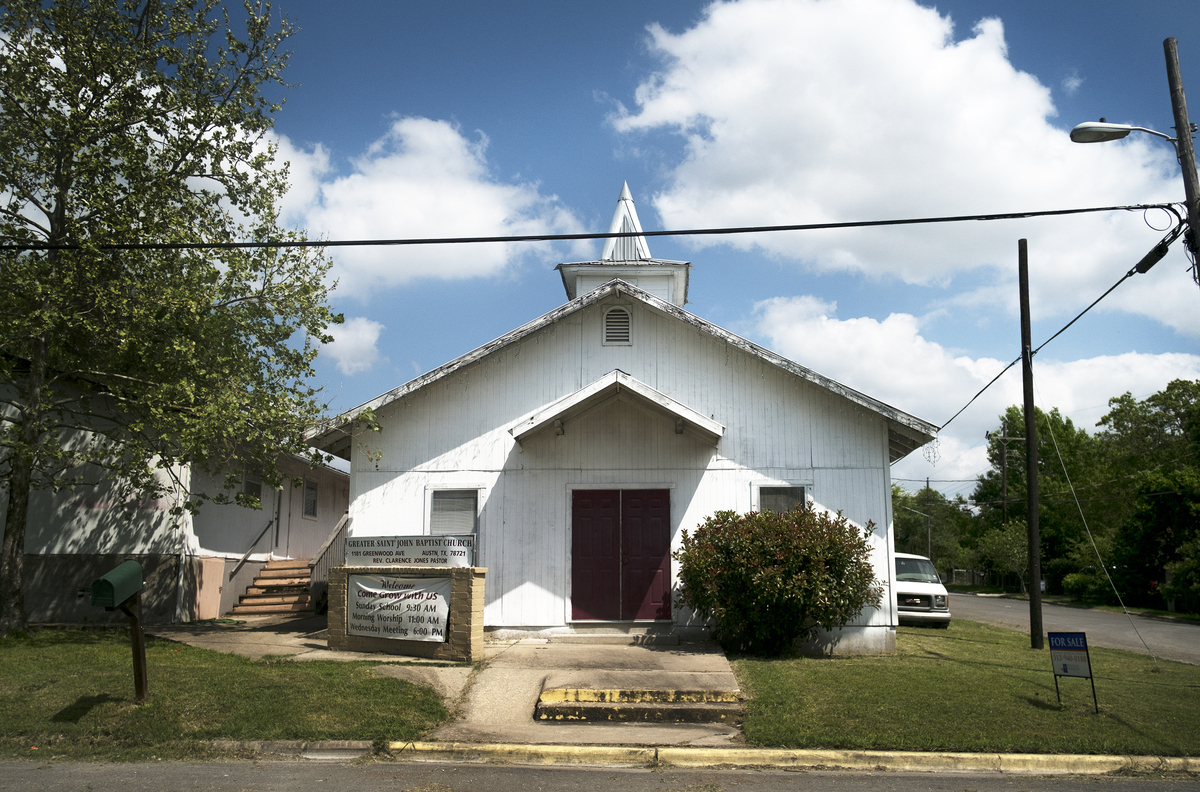 Greater Saint John Baptist Church, which has been in the East Austin neighborhood since 1945, is for sale.

But as the neighborhood around the church has begun to change — with two- and three-story homes replacing the older, ranch-style houses — Spearman and others have moved to surrounding suburbs. Spearman had been living in her grandmother's house when the family decided to sell.

"The taxes were too high – sky high," said Spearman, who three years ago moved to Manor, Texas, a small town about 15 miles east of Austin. "Houses around us were getting remodeled and sold for double, triple of what they paid for back in the day."

Ten years ago, Pastor Jones also left Austin for Manor. After renting in east Austin, Jones and his wife went looking for a house to buy. But they couldn't afford anything in the neighborhood they had lived in for most of their lives. So, like Spearman, they bought a home in Manor.

"We thank God that we found a beautiful home out there," said Jones.

Austin's E. 11th Street was once a business and entertainment corridor for the city's black residents. Back in the 1950s and 60s, nightclubs on the street hosted major music acts. Shops also served residents during the day.

"You had Hillside Pharmacy, which was the main pharmacy for African-American residents on the eastside," said University of Texas Professor Eric Tang, as he walked down the street.

And residents had few options of where to shop — or where to live. In 1928, the city of Austin approved a plan to cut off basic services to black residents unless they lived in east Austin. So, this area became a bustling black neighborhood, and remained that way for the next 60 years.

But recently, the businesses have changed. Tang pointed out what the pharmacy on E. 11th Street is now.

"Hillside Pharmacy, by name, still exists, and it's rather controversial," said Tang. "It is now a restaurant and Pharm, P-H-A-R-M has been replaced by Farm F-A-R-M to highlight the farm-to-table service that this restaurant provides to its customers."

Many longtime residents told Tang the the new businesses aren't catering to them — an anecdote indicating a larger shift. In 2014, Tang published a report detailing how among the fastest growing U.S. cities between 2000 and 2010, Austin was the only city to see a decline in its black population.

In the years since that report, Tang has published follow-up research, including a paper called "Those Who Left." Using the information collected from 100 interviews, Tang found that the majority of people left Austin because of unaffordable housing, while nearly one-fourth said they left in search of better schools for their kids. Many felt they had been pushed out.

And where were they going? Tang found that black residents left Austin for suburbs to the north and east of the city. Places such as Manor, Elgin and Round Rock. But these aren't suburbs as we often think of them. 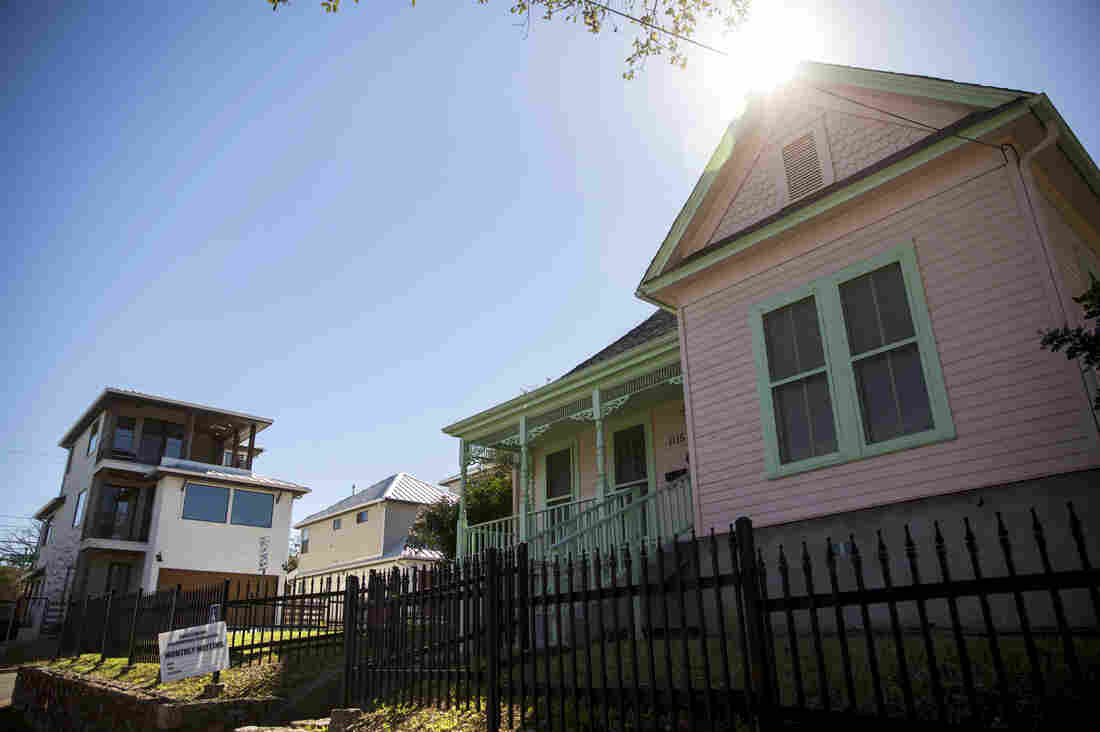 A new multi-story residential building (left) and an older style one-story space sit side by side on 12th Street in the East Austin neighborhood of Austin, Texas. The neighborhood has experienced a strong wave of gentrification, which often pushes people out of the now trendy area. Gabriel Cristóver Pérez/KUT hide caption 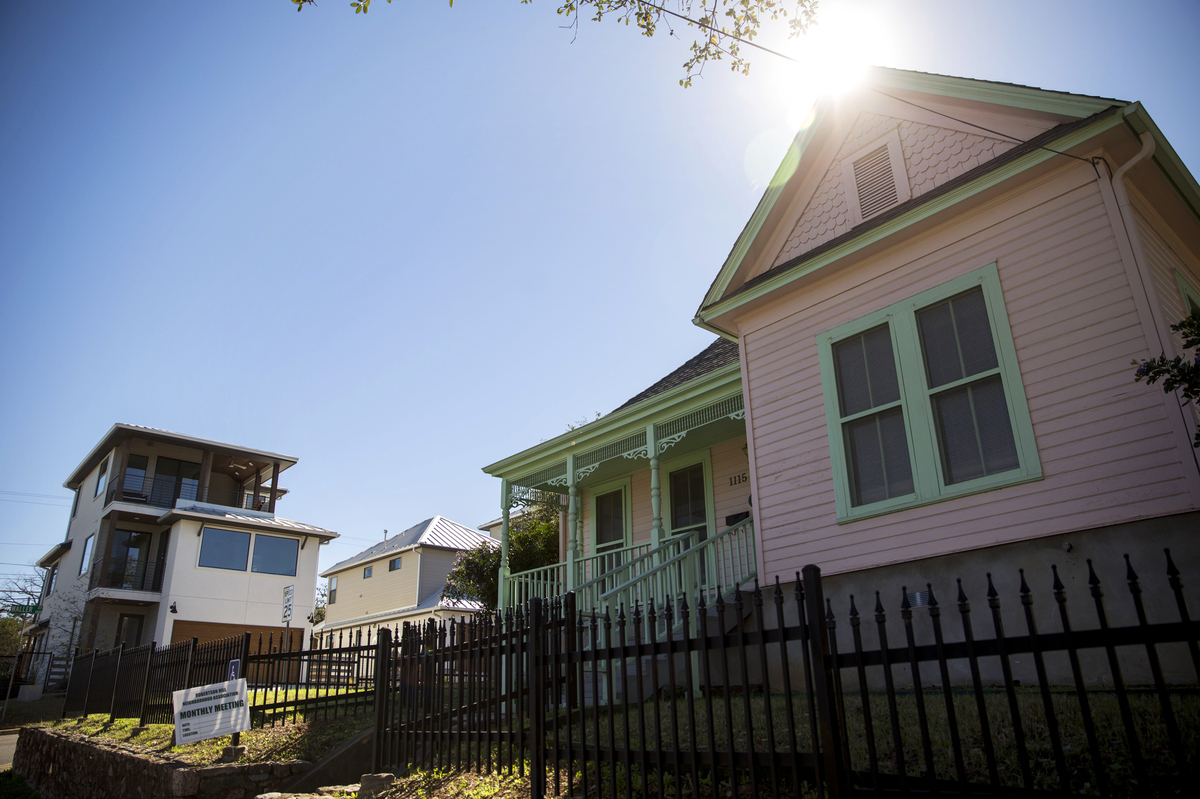 A new multi-story residential building (left) and an older style one-story space sit side by side on 12th Street in the East Austin neighborhood of Austin, Texas. The neighborhood has experienced a strong wave of gentrification, which often pushes people out of the now trendy area.

"These are areas which are largely isolated from the urban core where there are poor transportation options," said Tang. "They're known as food deserts. People feel like they have less access to health care and other amenities. So, these are suburbs to the extent that they're outside the urban core. But they are not a move up for people. They're simply a move out."

"That's pretty sad for me"

Leslie Perkins moved to Manor, Texas roughly 12 years ago. The town has a population of fewer than 10,000 residents.

Perkins stands on the town's main street, pointing to Manor Grocery, a convenience store that once served as one of the town's few grocery options.

"This is the grocery store that I used to go to when I first moved here," said Perkins, who's a former teacher and now works for an education non-profit. "It's very small, not very much fresh produce."

But while Austin has lost black residents, Manor's black population has increased by 10 percent since 2000, according to Census figures. Perkins left Austin for Manor when she began hunting for a home to buy.

"Even though I was a teacher, I could not afford to live in Austin," said Perkins. "So the closest and most direct to my job was Manor."

Soon, she transitioned jobs too, and began teaching in a Manor school. When she did, Perkins witnessed the migration of black families like her own.

"My students followed," said Perkins. "So, I would be teaching a new group of students, but I'd be like 'Oh, I know your cousin. Or you're the younger sibling of the student I already taught.'"

Perkins' family still drives into the city for things Manor can't offer: a museum or a dip in a pool. She misses living in Austin. But asked if she would move back, she said no.

"Moving back would not be an option because it doesn't feel as welcoming as it would," said Perkins. "I went to church in the area and I lived there. I was a part of the community. It doesn't really exist anymore as it did. And that's pretty sad for me."

Back at Greater St. John's Baptist Church in east Austin, the service is winding down. Congregants form a line along the pews, singing to and shaking the hands of fellow churchgoers as they walk to the door.

As people head to their cars, they pass a "for sale" on the front lawn. The church, soon, may follow its congregants.

"I see a whole lot of hope and growth out there in Manor," said Jones. "I think the church would do well to move in that direction."

In this report, professor Eric Tang says a store once called the Hillside Pharmacy is now a restaurant called Hillside Farmacy. In fact, while the business that was there before was known to local residents as the Hillside pharmacy, its name was Hillside Drugstore.