Accessibility links
Could Donald Trump Jr. Be Charged With Treason? Short Answer: No But he, and others in the Trump campaign, may have violated other laws. 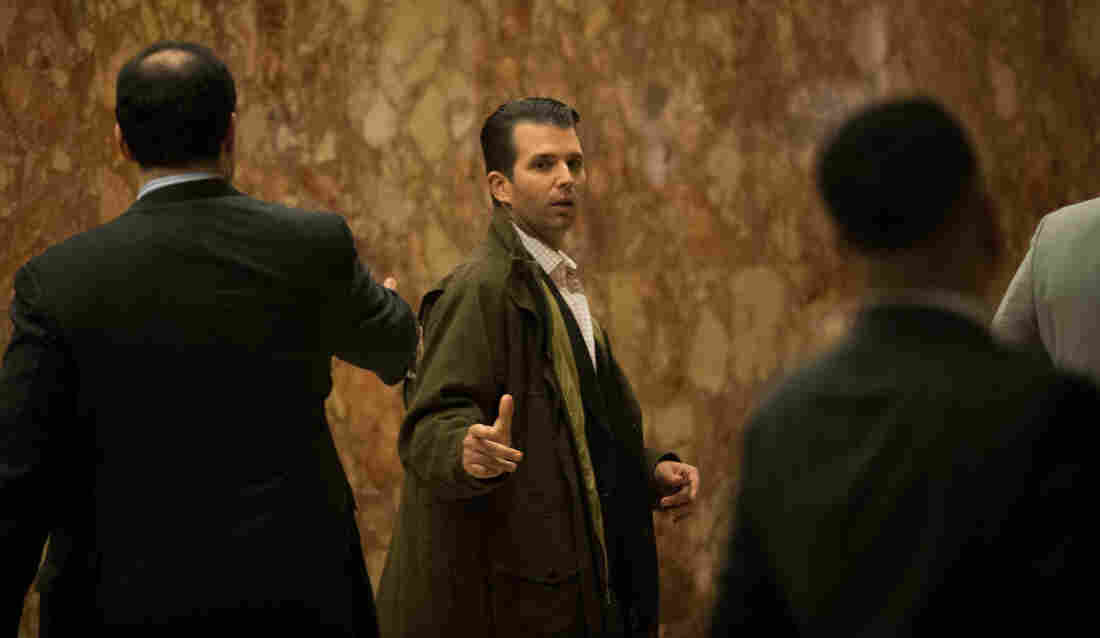 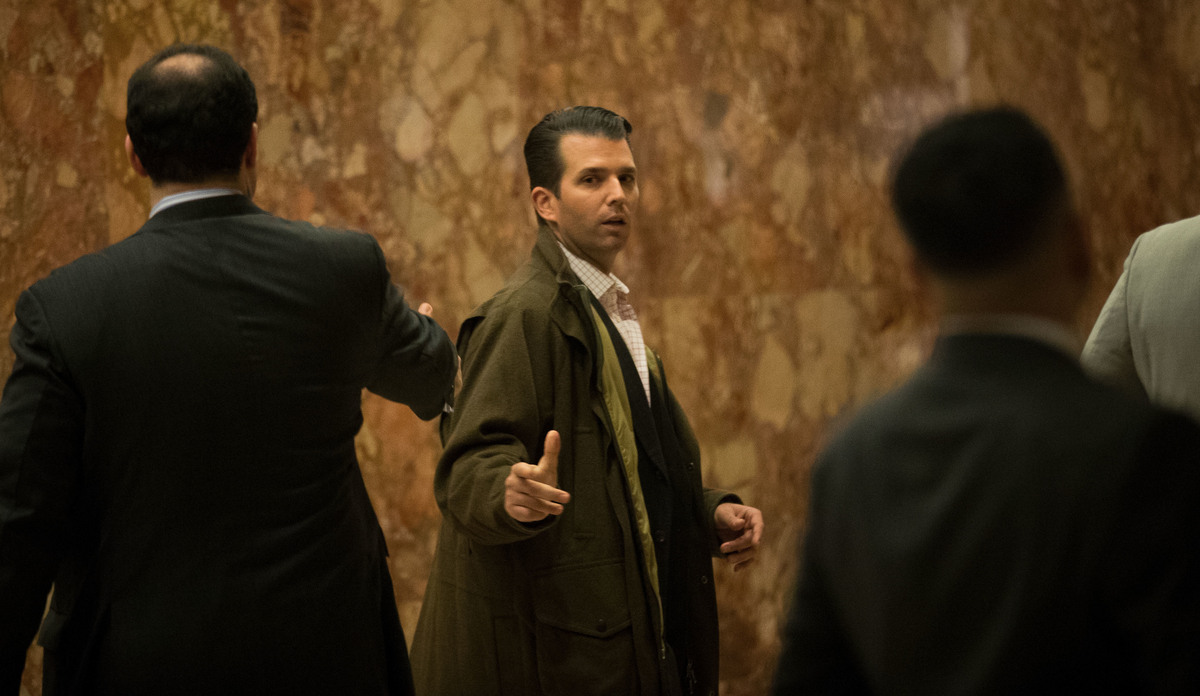 Donald Trump Jr., seen in the Trump Tower lobby in November 2016, met with a Russian lawyer after being promised damaging information about Hillary Clinton in June 2016.

The headlines get more breathless by the moment. "Explosive new charges!" "A bombshell!"

Was it a crime for Donald Trump Jr. to meet with a Russian government-connected lawyer who promised dirt on Hillary Clinton for use in the presidential campaign? Was it worse than a crime? Was it treason?

In terms of what is now being investigated, "we are now beyond obstruction of justice," Sen. Tim Kaine, Clinton's running mate, said Tuesday. "This is moving into perjury, false statements and even potentially treason."

Richard Painter, who served as the chief White House ethics lawyer in the George W. Bush administration, agrees, noting that "the dictionary definition" of treason and the "common understanding" is "a betrayal of one's country, and in particular, the helping of a foreign adversary against one's own country."

But Painter acknowledges that the crime of treason is rarely charged in the United States for a variety of reasons, including the fact that the Constitution requires either a declaration of war or some attempt to overthrow the government by violence. But, as he observed in an interview with NPR, "we just use other statutes because most of what is treason would have violated another statute anyway."

During the Cold War, for instance, when Americans gave secrets to the Soviet Union, the charge used to prosecute accused spies, including Julius and Ethel Rosenberg, was espionage. Most were sentenced to prison; the Rosenbergs were executed.

Today, other, less dire laws are in play. Painter and others, for instance, maintain there is the possibility that Trump Jr. violated campaign laws by seeking to acquire something of value — namely, opposition research to use against Clinton — from a foreigner. U.S. campaign finance laws explicitly bar obtaining money or other things of value from foreigners.

Indeed, Kushner and Manafort could be in legal jeopardy, too. They also met with the Russian lawyer after they were forwarded the email exchange promising that the lawyer had "information that would incriminate Hillary and her dealings with Russia," to which Trump Jr. responded, "I love it especially later in the summer."

Trump Jr. says the June 2016 meeting in Trump Tower did not produce the information that had been promised via email about Clinton. He said he did not discuss the meeting with his father, as "there was nothing to tell."

There are also laws barring perjury or making false statements to law enforcement officials. Painter says that he presumes Trump Jr., as well as Manafort and Kushner, were interviewed by the FBI in connection with Kushner's security clearance, for instance. Any potential false statements made during that process — denials about meetings with Russians, for example — could put any of the three in legal jeopardy, he says.

According to Painter, that is not the only issue. The Trumps "over and over again, have said, 'We did not collude with the Russians,' and they did not collude with the Russians, I guess, like President Clinton did not have sex with that woman." The difference, says Painter, is that "this is a lie we care about. This is about our national security."

Treason is deliberately hard to prove and rare in U.S. history

Using the word "treason" can be a fraught affair. As Yale Law School's Eugene Fidell observes, treason is the only crime specifically mentioned and defined in the Constitution because it was a charge so abused by the English monarchy. In rebelling against the Crown, the Founding Fathers put a narrow definition of treason into the Constitution as "a protection," according to Fidell. Under the Constitution, "treason against the United States shall consist only in levying war against them, or in adhering to their enemies, giving them aid and comfort."

Subsequent interpretations, by James Madison in the Federalist Papers and Chief Justice John Marshall in an 1807 Supreme Court opinion, have connected treason only to the "levying of war" or the use of force to overthrow the established institutions of government.

There is a second protection as well for those accused of treason. Under the explicit terms of Article III of the Constitution, "no person shall be convicted of treason unless on the testimony of two witnesses," both confirming the same overt act, "or on confession [of the accused] in open court."

That requirement is an unusually high bar to meet, which is part of why there have been relatively few successful treason prosecutions in the nation's history. Fewer than a handful of those convicted were put to death, and some were acquitted, including Aaron Burr of intending to found an independent nation in the Western states.

Perhaps the most infamous American turncoat was Benedict Arnold, the Revolutionary War general who switched sides and spied for the British. Although his co-conspirator was executed, Arnold escaped to Britain.

A more modern example was Iva Toguri D'Aquino, an American citizen dubbed "Tokyo Rose" by American servicemen in the Pacific during World War II. Stuck in Japan at the time of Pearl Harbor, and under pressure, she refused to renounce her U.S. citizenship but participated in propaganda broadcasts aimed at Allied servicemen. When she returned to the U.S. after the war, she was convicted of treason, served six years of a 10-year sentence. She was later pardoned by President Gerald Ford after the Chicago Tribune reported that the two major witnesses against her had been coached to give false testimony.

Fidell contends that it is a nasty practice to "immediately throw the treason card on the table, even in the context of mere political discourse." It has a "Queen of Spades flavor to it," he says — "off with their heads." He notes that during the campaign, Trump repeatedly labeled Sgt. Bowe Bergdahl a "traitor," even though the charges against Bergdahl are desertion and "misbehavior before the enemy by endangering the safety" of fellow troops.

Now that the "shoe is on the other foot," Fidell says, he still thinks that it is an "outrageous charge" and that the "sins of the father" should not be "visited upon the son."

In this story, Eugene Fidell refers to the Queen of Spades. He meant to say it was the Queen of Hearts who pronounced, "Off with their heads!"