Accessibility links
Donald Trump Jr.'s Emails: 5 Unanswered Questions About His Meeting With Natalia Veselnitskaya Trump Jr. revealed a lot in disclosing an email thread that described Russia's offer of help to his father's campaign — but he also raised many other questions about the story. 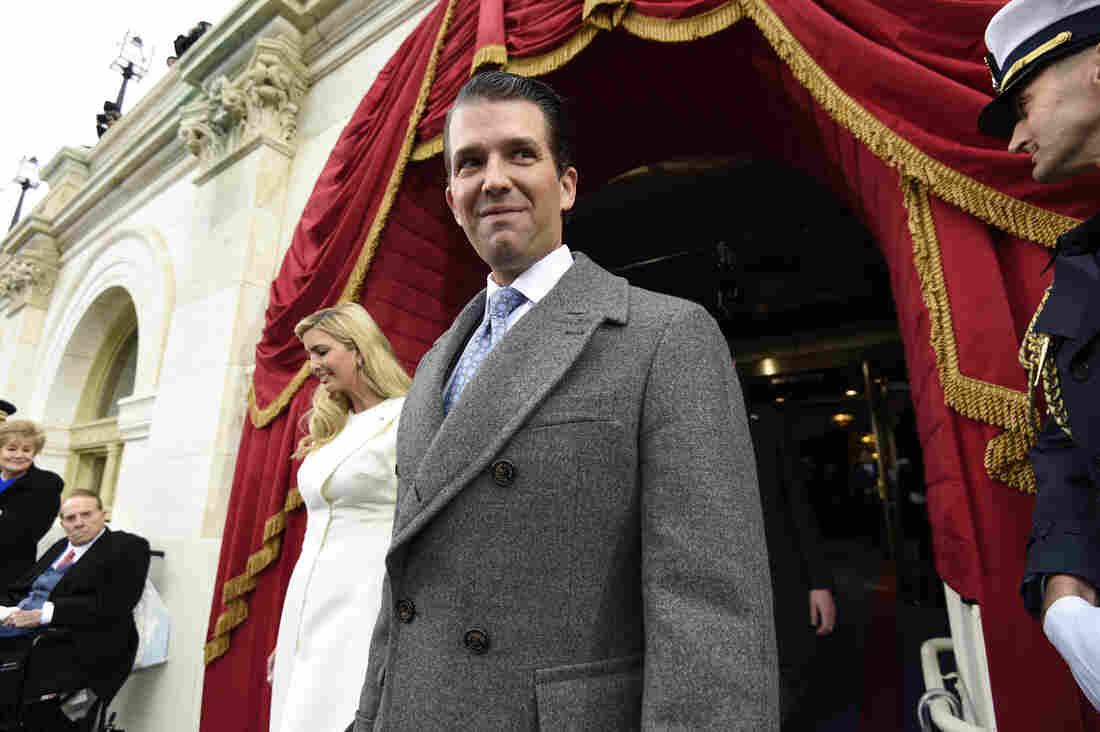 Donald Trump Jr. and Ivanka Trump arrive for President Trump's inauguration on Jan. 20. Trump Jr. is under scrutiny over revelations about a meeting he held with a Russian lawyer in 2016. Saul Loeb/Getty Images hide caption 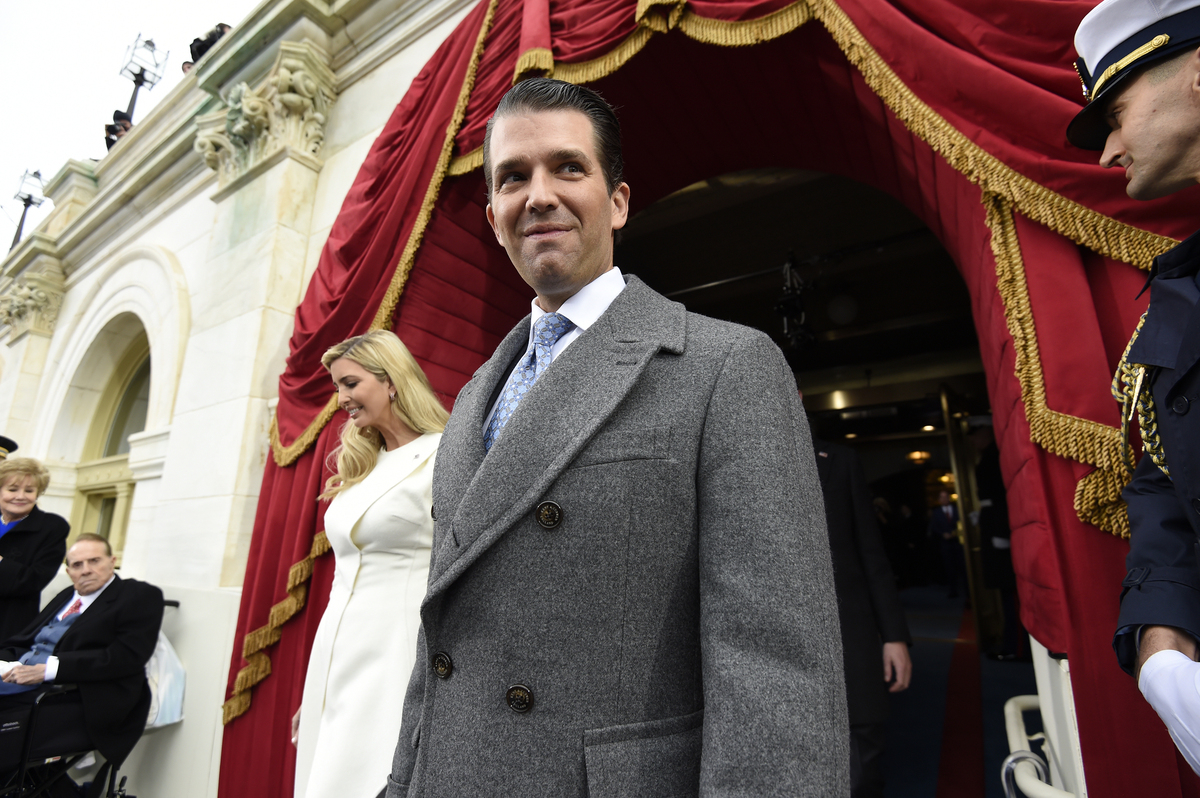 Donald Trump Jr. and Ivanka Trump arrive for President Trump's inauguration on Jan. 20. Trump Jr. is under scrutiny over revelations about a meeting he held with a Russian lawyer in 2016.

Donald Trump Jr.'s emails about Russian help for his father's campaign revealed a great deal about the imbroglio over the meddling in the 2016 election — but they also raised as many questions as they answered.

Trump Jr.'s bid for "transparency" laid out the whos, wheres, whats and hows, but left out some critical details.

For all the revelations that were contained within the Trump Jr. bombshell — the Russian government's offer of help, the Trump team's willingness to accept it and the primary confirmation of direct contact between the two sides — here are five questions to which there aren't yet tidy answers.

1. Who was the second person in the meeting?

The Russian government used intermediaries of Family Trump to offer "high level, confidential" information about Hillary Clinton that it believed would damage her and help Donald Trump be elected, as Trump Jr.'s correspondent wrote him. To that end, the emails say the Russian government dispatched attorney Natalia Veselnitskaya on a special trip from Moscow to New York for the meeting.

But Trump Jr.'s emails also include this promise: "I will send the names of the two people meeting with you for security when I have them later today."

Trump Jr. and Veselnitskaya have denied in separate statements that she actually had any dirt on Clinton. Even if that is so, neither of them have talked much about this other person. Veselnitskaya has suggested it was an interpreter to convey in English what she wanted to say in Russian to Trump Jr., campaign chairman Paul Manafort and President Trump's son-in-law Jared Kushner.

Trump Jr. and Veselnitskaya have confined their remarks about the meeting to each other and the other Trump employees — but more detail about the second person could offer additional clues about the nature of Moscow's overtures to the Trumps.

Was the person from the Russian Consulate in New York? A Foreign Ministry diplomat there to convey official assurances? Or was the person an intelligence officer there to give Moscow an independent account of what took place? Or was it simply someone Veselnitskaya hired for the day to serve as her interpreter?

The top Democrat on the House Intelligence Committee, Rep. Adam Schiff of California, suggested on Tuesday that the meeting described in Trump Jr.'s emails was "consistent with Russian tradecraft." But it isn't clear yet whether it was a venue to actually pass the dirt on Clinton or just a test to see whether the Trumps would let Veselnitskaya in the door or call the FBI.

2. How many other direct discussions took place between the Trump camp and the Russians?

But the following month, Trump campaign foreign policy adviser Carter Page made a visit to Moscow. While there, he gave a speech about Western hypocrisy in international affairs. Did he also use that trip to meet with Russian intelligence officials or government leaders?

There has been a great deal of speculation about Page's visit and his broader role in this Russia saga. The New York Times reported in April that U.S. law enforcement officials looked into Page's connections to an officer in Russia's foreign intelligence service, the SVR. Ultimately, the Times reported, the FBI concluded at the time that Page hadn't become a Russian agent.

If he had pre-existing connections with the Russian government, however — as did Manafort and a few other Trump aides — did the campaign send Page to Moscow in July to follow up on whatever Trump Jr., Manafort and Kushner discussed with the delegation they had hosted the month before?

There have also been other suggestions that Trump aides might have communicated electronically with Russians: Sen. Kamala Harris, D-Calif., asked former FBI Director James Comey when he appeared before the Senate Intelligence Committee whether the Americans had used encryption to conceal their messages from the U.S. intelligence community and whether they might have destroyed evidence of those communications.

"That's not a question I can answer in an open setting," Comey said.

As for Page's personal trip to Russia, it took place the same month, Comey later told Congress, that the FBI had begun its counterintelligence investigation into potential links between Russia and the Trump campaign.

Page has used TV and other appearances more recently to deny any inappropriate contacts with Russia.

3. How much did the Russians tell the Trumps about their other schemes, including the cyberattacks? And how much guidance did they request?

Trump Jr.'s email revealed that Russia's top government prosecutor, Yuri Chaika, wanted to use a series of cutouts to communicate information about Clinton to the Trumps to give them a hand in the election.

Chaika didn't want to talk directly to Trump. Instead, he spoke to a Moscow developer who helped Trump stage the Miss Universe pageant in Moscow in 2013. The developer spoke to his son. He spoke to his publicist, who then sent the email to Trump Jr. laying out the connection.

All this took place in June. But Comey told members of Congress that Russia's cyberattacks — against as many as a thousand targets in the U.S. — began as early as late 2015.

If the Trump campaign was in communication with the Russian government by June, did the Russians tell whomever they spoke with that they also had already begun a separate offensive against the United States? Or did the intelligence bosses at the SVR and its siblings — the military GRU and the more domestic-focused FSB — decide to "compartmentalize," as spies say, how much they told the Trumps?

There were overt indications at about this same time that Russian President Vladimir Putin was supporting Trump. The Russian leader had said in December 2015 that Trump was "colorful" and "talented," and Trump later said Putin called him "a genius."

Plus Russia's state media were supporting Trump. Political analyst Aleksandr Dugin, dubbed "Putin's Rasputin," endorsed Trump in the early summer and used some of his TV and YouTube commentaries to make the Russian case for why he would be a better president.

There are some indications that people in the Trump orbit were told at least something about the GRU's scheme: Adviser Roger Stone famously wrote on Twitter that Clinton's campaign chairman, John Podesta, would soon have his "time in the barrel," before WikiLeaks published Podesta's emails.

The U.S. intelligence community says Russian intelligence hacked Podesta's email and used WikiLeaks and other intermediaries to fence the release of the information. Stone has acknowledged that some middleman told him about WikiLeaks' plans, but he denied he had any inside knowledge about Russia's meddling.

Trump Jr.'s emails, however, show the care the Russian government took in using three or four steps' worth of connections, including no one who was technically a Russian government employee, to connect with the Trump campaign. And Trump Jr. not only said "I love it" in response to the Russian overtures, but he also said "particularly later in the summer" — in other words, not only do we want dirt on Clinton, but also having it at a specific time would help us.

How much other such communication took place and what roles were any other Trump aides playing in helping the GRU or others conduct their cyberattack on the United States?

4. Have the Russians turned on the Trumps?

Members of Congress and international commentators have warned over and over that Putin is not a Republican or a Democrat — what he wants is to sow chaos and expose what he calls the hypocrisy of a West that loves to preach to Russia but he views as just as venal.

In practical terms, Moscow hasn't actually gotten much from Trump and the West since the election: American sanctions remain in place — and could be strengthened under a new bill. American military deployments to Eastern Europe have continued. American support for Ukraine, which Russia invaded in 2014, has endured.

So does that mean Putin has decided to keep the United States off balance by fueling more political fires in Washington between the Republican and Democratic leaders, who are so strongly at odds over Trump and Russia?

The White House and the Justice Department have suggested that some of the unnamed sources in the explosive press reports about Trump might not be Americans, and the U.S. intelligence community has concluded that the Russian intelligence agencies are holding a cache of material about Republicans like the one they compiled about Democrats. Will they begin to release it?

Former Director of National Intelligence James Clapper and other leaders warned Congress that Russian hackers breached older GOP servers at the same time they had compromised the computer systems of the Democratic National Committee. So whatever material the Russians gleaned, it might be less current and less embarrassing than what they released about the Democrats.

But the Russians have another ace to play if they want to use it: They know everything about their dealings with the Trump campaign team and are in a position to reveal what they know when and if they choose.

That was the dilemma about which then-Acting Attorney General Sally Yates rushed to warn White House counsel Don McGahn about: The Russians knew then-national security adviser Mike Flynn hadn't told the truth about his conversations with Russian Ambassador Sergey Kislyak, and that, among other things, opened him up to the threat of blackmail.

5. How much did Trump know about it all?

The president goes back and forth about what he acknowledges and what he ridicules. He has said both that he accepts the U.S. intelligence conclusion that Russia attacked the election and that the whole thing is a "witch hunt." He said that he pitched Putin the idea of a joint, "impenetrable" U.S.-Russian cybersecurity unit, then said later that day it would not happen.

Trump Jr. told Fox's Sean Hannity on Tuesday that he never told his father about the June 2016 meeting with the Russian lawyer, and the White House says Trump didn't learn about any of this until Kushner updated his security disclosures with the latest details.

Spokeswoman Sarah Sanders referred reporters' questions about what Trump knew and when to the outside attorneys who have been enlisted to help manage the imbroglio.

Is it plausible that the president's eldest son, campaign chairman and son-in-law — who continues to serve as a top White House adviser — never told Trump about the Russian overtures? At least one point from the chronology suggests they did: Then-candidate Trump promised he would deliver "a major speech" attacking Clinton later in the same day that Trump Jr. scheduled his meeting with the Russians who had promised him dirt on her.

The younger Trump insisted to Hannity that this story is overblown and that, as he maintains, nothing actually came of it. He did, however, acknowledge that it has put the family in something of a jam.

"In retrospect," he said, "I probably would have done things a little differently."