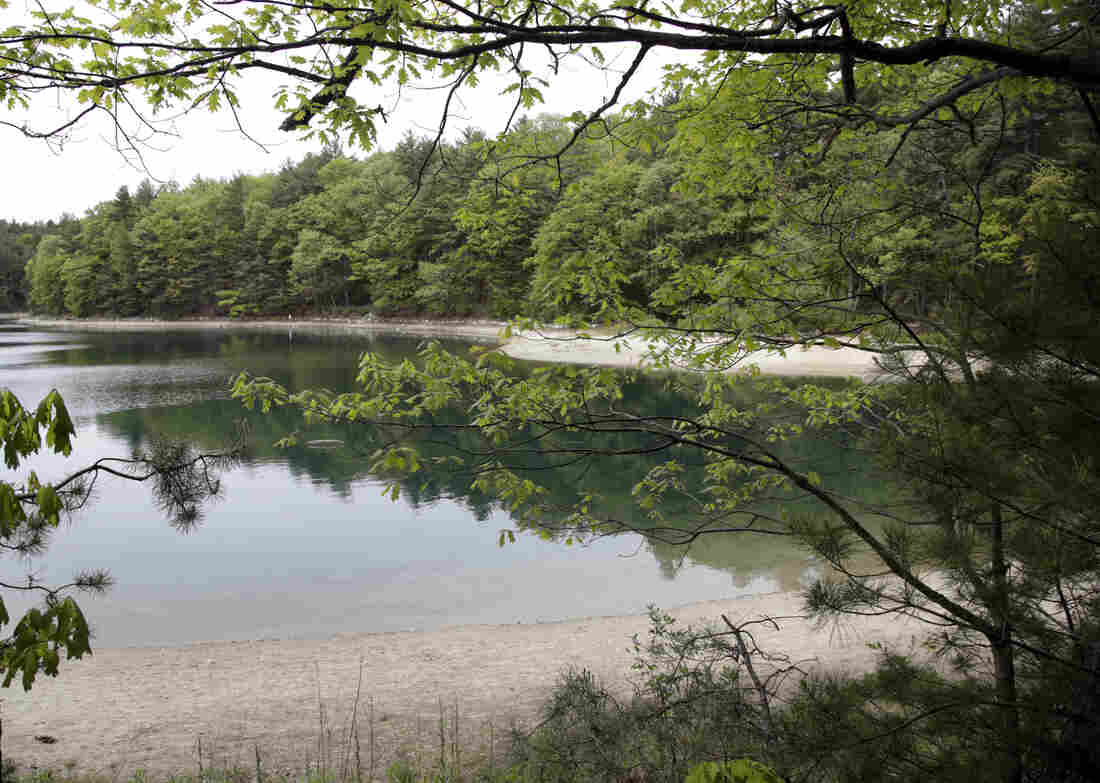 Thoreau was 27 years old when he built a small cabin on the shores of Walden Pond in Concord, Mass., in 1845. Elise Amendola/AP hide caption

Henry David Thoreau spent hours hiking in the woods near his small cabin on Walden Pond. "He figured out that the way to break through into his own way of doing things was to think as he walked," explains biographer Laura Dassow Walls.

Walls, an English literature professor at Notre Dame, has spent her career studying Thoreau. Her new 615-page biography comes out Tuesday, coinciding with the 200 anniversary of his birth. 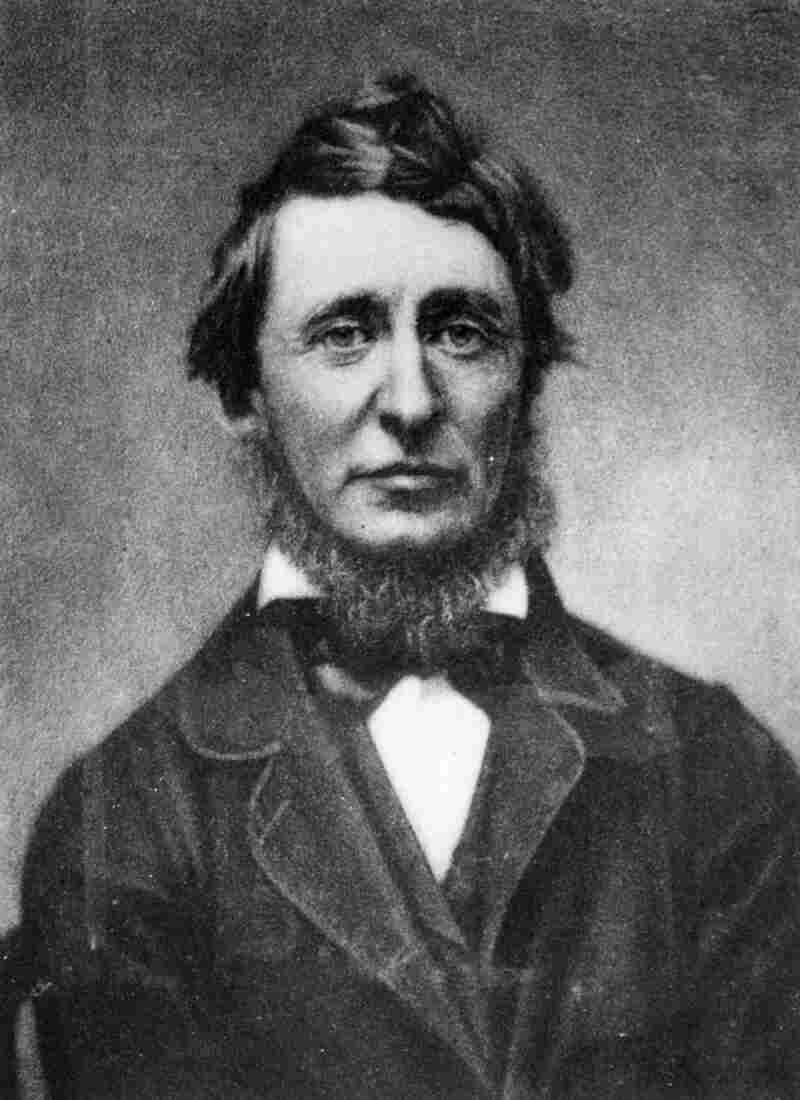 Thoreau was born 200 years ago, on July 12, 1817. He died of tuberculosis at age 44. Hulton Archive/Getty Images hide caption

Thoreau was 27 years old when he built his small cabin in the woods near Concord, Mass. He set out to live a simple, solitary life, and it was there that he ended up writing his best known works, Walden and Civil Disobedience.

Walls says Thoreau scribbled notes in pencil on scraps of paper — descriptions of the sights, sounds, smells and feel of the things around him.

"To do that is to break the wall between ourselves and nature," she says. "And to understand that we're always part of nature and nature is always a part of us. So to be here, and to be wholly immersed, to be hot when it's hot, and cold when it's cold, to be hearing the birds, and feeding the little mouse that lives under his cabin — is to completely demolish that barrier and understand something really fundamental about what it is to be human."

"When he moved to his little cabin at the pond he was on a quest for self-discovery ... he was declaring his own independence," says singer-songwriter Don Henley. The Eagles drummer was 22 when he discovered Thoreau in 1969.

"People who were my age in the '60s were on the same quest," he says. Walden was a very popular book back then. So I was just seeking spiritually, as Thoreau was, for something to ground me."

In 1990, Henley founded the Walden Woods Project and raised $20 million to purchase 200 acres of wooded land adjacent to Walden Pond so that it couldn't fall into the hands of real estate developers. That's in keeping, Henley believes, with Thoreau's philosophy.

"He stood up in the face of the Industrial Revolution," Henley explains. "He said: Wait a minute, wait a minute. We have to slow down, take a look around us, and not destroy what's left. His famous quote was: 'In wildness is the preservation of the world.' It's difficult to be 150 years of ahead of your time, but he was."

Thoreau moved to Walden Pond to think through his life, and also the life of the nation, Walls says: "He thinks something is going deeply wrong with America — and he's trying to figure out what is the foundational problem that gives rise to such destructive habits and patterns of life that we could imagine it's OK to enslave people."

Reading through his journal, reflections on nature are interspersed with rage-filled entries. Christine Nelson, curator of a Thoreau Bicentenary exhibition at the Morgan Library in New York City, points out one example from 1851, in which Thoreau writes: "Do we call this the land of the free? What is it to be free from King George ... and continue the slaves of prejudice?"

The Morgan exhibition includes the author's handwritten journals (you can see some of them here), along with artifacts from his life. Visitors can see the actual lock from the jail cell where Thoreau spent a night for refusing to pay his taxes to a government that sanctioned slavery, and waged what he considered an illegal war against Mexico. The experience inspired his essay, Civil Disobedience, a tract urging non-violent resistance to unjust laws, that later influenced Mahatma Gandhi and Martin Luther King, Jr. 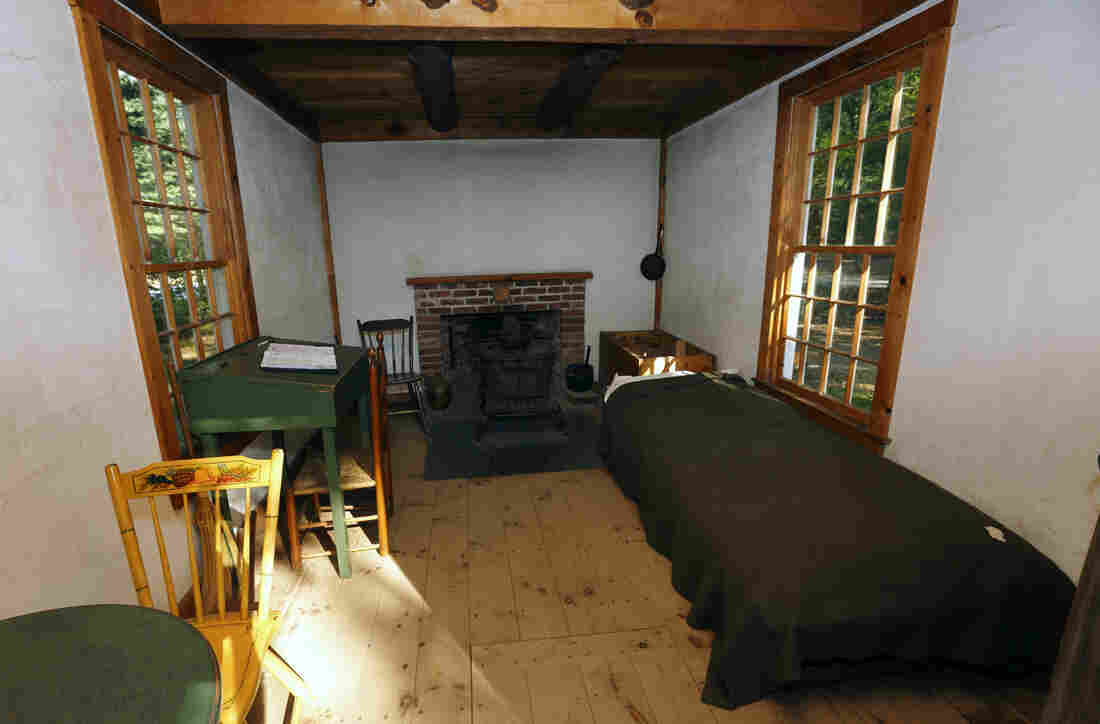 The interior of a replica of Thoreau's cabin on the shores of Walden Pond. Michael Dwyer/AP hide caption

Kevin Dann, author of another new Thoreau biography, says Thoreau's overriding theme of "the sovereignty of the individual" is why the author is more relevant now than ever. Just look, he says, at the nation's surveillance systems and police brutality.

"Everybody in this country is afraid," says Dann. If Thoreau were alive today, Dann believes "he would have been out there and he would have been shouting from the rafters: People, go into the street! You have no sovereignty anymore. It is gone."

Back at Walden Pond, Laura Walls points to a sign next to the site where Thoreau built his cabin. "It reads: I went to the woods because I wished to live deliberately, to front only the essential facts of life, and see if I could not learn what it had to teach, and not, when I came to die, discover that I had not lived."

Thoreau died from tuberculosis in 1862. He was 44 years old.

James Delahoussaye and Tom Cole produced and edited the audio of this story. Beth Novey adapted it for the Web.