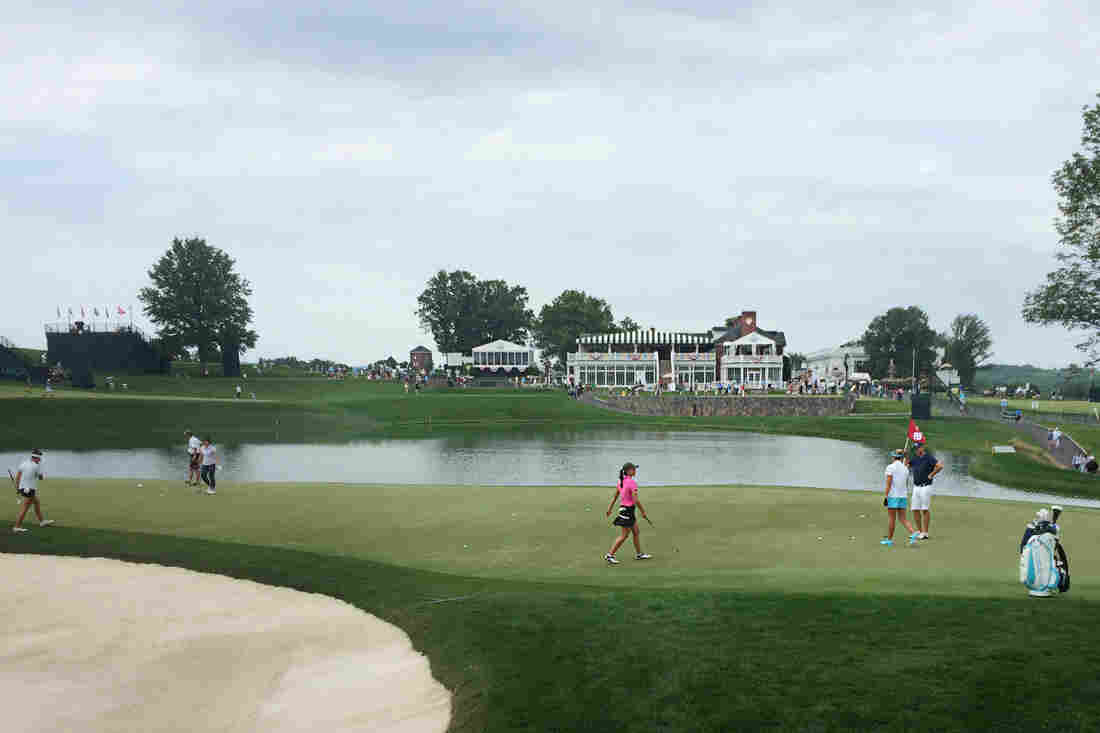 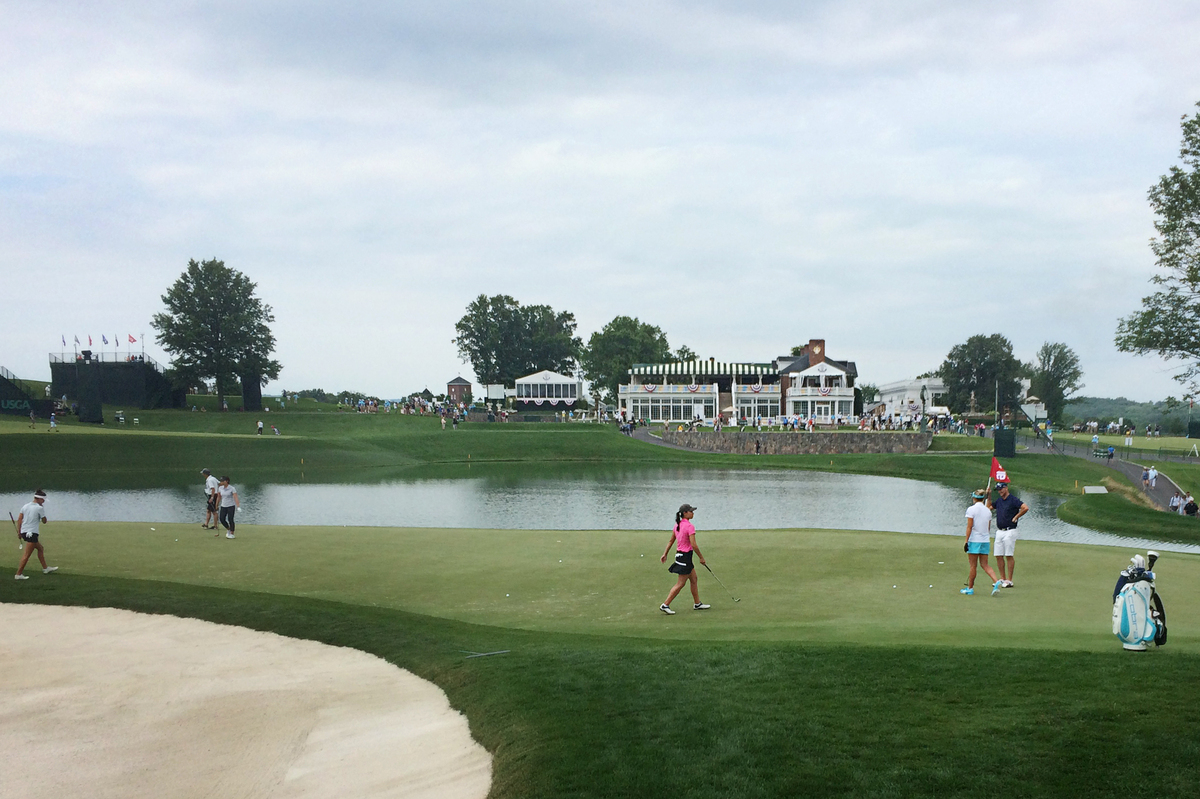 Golfers work on the 16th green during a practice round Wednesday at Trump National Golf Club in Bedminster, N.J. The U.S. Women's Open Golf Championship starts there today.

President Trump will loom over the U.S. Women's Open golf championship this weekend in Bedminster, N.J., whether he's there or not.

The tournament tees off Thursday at the Trump National Golf Club — despite the protests of women's rights activists, who urged the organizers to move the event somewhere else.

Now the best female golfers in the world may share the stage with the president. Although Trump's schedule has not yet been confirmed, tournament organizers have built a special glass-enclosed skybox overlooking the 16th tee so the president could watch the competition on what's said to be one of his favorite courses.

"It's absolutely gorgeous," says Chris Scofield, a golf fan who lives a few miles down the road from the course. "It's hilly, it's challenging. A lot of undulation on the greens — they're quick, the rough is deep."

Scofield is the kind of dedicated fan who comes to watch the practice rounds. He gets why the US Golf Association picked this course, but he hopes Trump will stay away this weekend.

"I hope he doesn't show up," Scofield says. "Because I think that would ruin the event, and take away from how good these women play."

The USGA chose this course in 2012 — years before Trump decided to run for president. And that was long before the release of the infamous Access Hollywood tape, where Trump is heard bragging about groping women. This marks the first time this course has hosted a major tournament.

"Holding the tournament on this course sends the exact wrong message," says Shaunna Thomas, co-founder of UltraViolet, a group that advocates for women's rights. It's been pushing the USGA for months to move this tournament to another course. UltraViolet even hired a plane to fly above the U.S. Open men's championship in Wisconsin last month pulling a banner that urged the USGA to "take a mulligan, dump Trump."

"They're giving millions in revenue, free advertising and branding, to his platform and policies," Thomas said, "which repeatedly degrade women, and encourage hate and division."

"We're a golf organization," said USGA CEO Mike Davis at a press conference in May. "We're simply not going to cross that line into politics. We can appreciate that some people do, but we're a golf association, and we're sticking to golf."

USA Today reports that Trump threatened to sue if the USGA moved the tournament, but the USGA won't confirm that. Davis skipped a press conference this week.

At least one player — Brittany Lincicome — said last week that she wants Trump to stay away. Other top golfers were asked this week if they agree. One by one, they politely dodged the question.

"I take my role as a female role model very seriously," said former U.S. Open champion Michelle Wie. "But this week is about the golf."

At a practice round this week, fans were more forthcoming. Some are conflicted about holding the tournament on Trump's course, including Leah Delacruz and Veo Cubero of Brooklyn.

"We don't want to buy something that has his name on it," Delacruz said.

"But we also want to support the ladies," Cubero interjected. "We love the LPGA."

"So, it's like, how can you not come and support your favorite players?" Delacruz asked.

Frank Hayn likes keeping the tournament here. He's a Trump supporter, and a member of this golf club.

"The players — male or female — deserve to play on some of the best tracks in this country," Hayn said. "And this is definitely one of them."

But even Hayn concedes that the competition on the course may be overshadowed by the president and the protesters.