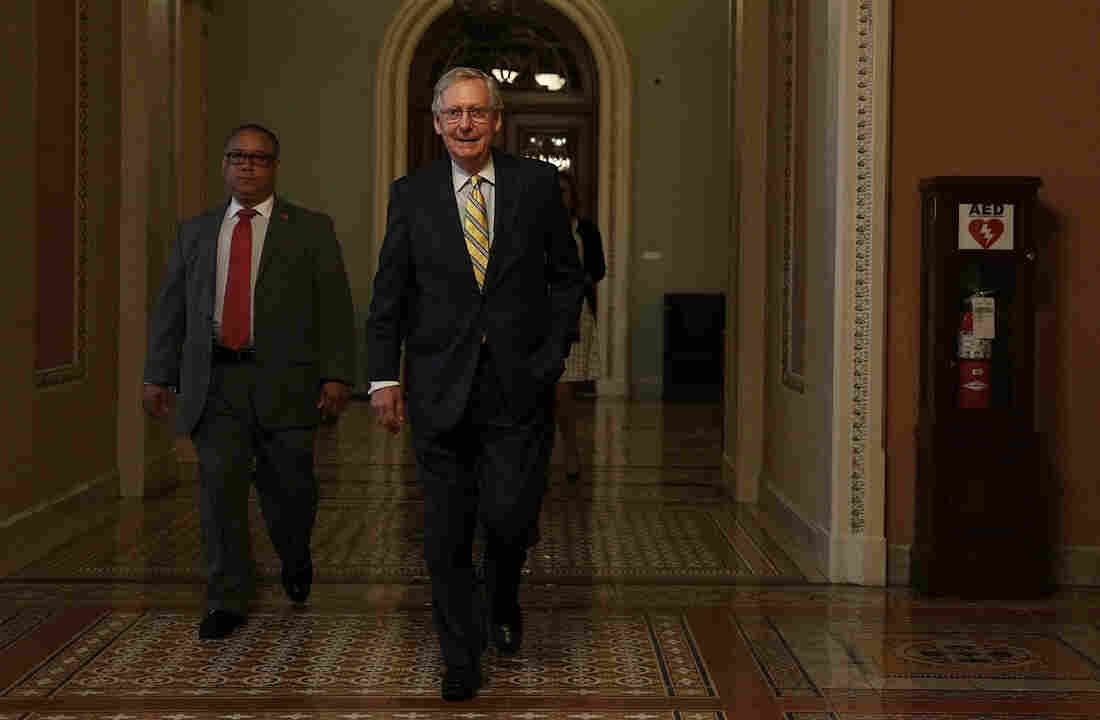 Senate Majority Leader Sen. Mitch McConnell, R-Ky., on his to his office on Thursday at the Capitol in Washington, D.C. Alex Wong/Getty Images hide caption 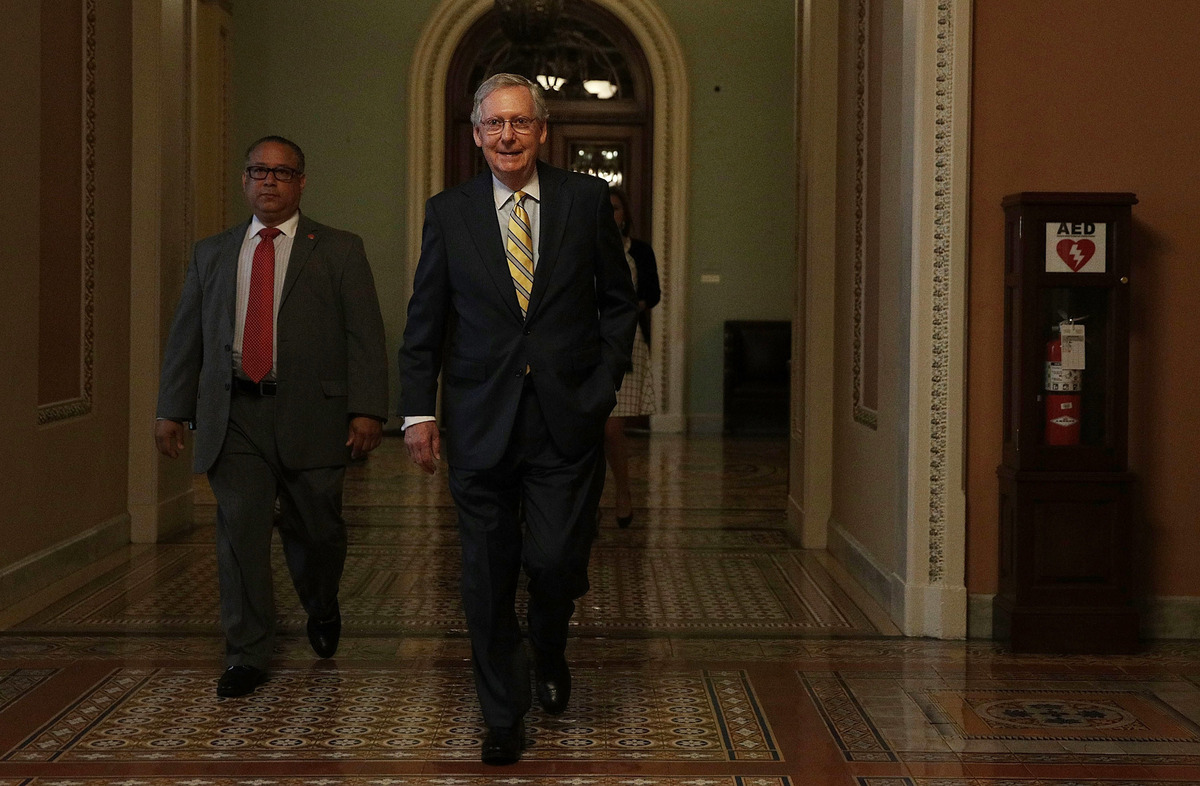 Senate Majority Leader Sen. Mitch McConnell, R-Ky., on his to his office on Thursday at the Capitol in Washington, D.C.

Senate Republicans on Thursday released a revised version of the Better Care Reconciliation Act, their plan to replace the Affordable Care Act.

The new version comes after the Congressional Budget Office found that the original BCRA would in the next decade increase the uninsured population by 22 million over what it would otherwise be. Senate Majority Leader Mitch McConnell had hoped for a vote before July 4, but was forced to delay that because he couldn't garner the 50 votes he needed among the 52 GOP senators.

Who's In, Who's Left Out With The Latest Senate Health Care Bill

The question now is whether this version of the bill could pass the Senate. Shortly after its release, Maine Sen. Susan Collins and Kentucky Sen. Rand Paul both said they intend to vote against letting the bill go forward. With two no votes, Vice President Pence could provide the 51st vote needed for passage. But if three Republican senators defect, the bill cannot pass.

The new bill makes some big changes from the last BCRA draft, but it also leaves some major parts of the original Senate proposal intact — it would still repeal the individual and employer mandates, it would still mean cuts to Medicaid spending, and it would still allow states to opt out of key parts of Obamacare.

In their summary of the bill, Senate Republicans laid out the major provisions. Here are some of those big changes that this new version of the bill would make to the original BCRA, and what they would mean:

Health savings accounts will be able to pay for premiums. Under IRS rules, people with high-deductible plans are eligible for health savings accounts (HSAs), accounts into which people can put money for health care expenses tax-free. Under this bill, people would for the first time be able to use that money for premiums. Americans' deposits in HSAs have ballooned over the last decade, according to HSA consulting firm Devenir. However, those accounts also tend to benefit higher-income people more than others, as Kaiser Health News' Michelle Andrews wrote in December — for example, richer people are more likely to have the extra money to sock away for health expenses.

More money for the opioid epidemic. The Senate's initial bill offered $2 billion to address the opioid crisis for 2018. This version would offer about $45 billion over 10 years, which is what Republicans Ohio GOP Sen. Rob Portman and West Virginia Sen. Shelley Moore Capito had requested at one point. However, some experts say that around $4.5 billion a year is nowhere near enough for combating America's massive opioid epidemic, as the New York Times reported in June.

Allowing insurers to offer non-Obamacare-qualified plans. This mirrors an idea that Texas Sen. Ted Cruz and Utah Sen. Mike Lee had proposed in recent weeks: The Senate's bill would allow an insurer to offer skimpier plans. As long as an insurer does offer a plan on the individual insurance exchanges that meets the demands of Obamacare's Title I (for example, covering certain areas like preventive care and protecting people with pre-existing conditions), that insurer will be allowed to offer additional plans off of the individual insurance exchanges that don't meet those criteria.

Extra stabilization money, in part for high-risk customers. The original version of the BCRA provided $112 billion that would have allowed states to stabilize their markets or help high-risk customers in a wide variety of ways. In this version, that is bumped up to $182 billion. One function of this money is to mitigate some of the two-tier issues created by new, nonqualified plans. If an insurer offers a plan that meets the Obamacare criteria, that insurer would be eligible for money to help high-risk customers.

This all means that the new version doesn't make major changes to one big part of the BCRA: Medicaid. Under the original Senate bill, the Obamacare Medicaid expansion would be rolled back, and Medicaid spending would be capped — states would either be allotted a certain amount per capita, or they could get a block grant instead. It also caps Medicaid spending growth in the medium-to-long-term. This bill doesn't change any of that.

According to the CBO, the original BCRA would have cut Medicaid spending by $772 billion over 10 years, and would have resulted in 15 million fewer Medicaid enrollees by 2026 than under current law.

A new CBO score on the bill is expected Monday or Tuesday. By the end of next week, there is likely to be a key procedural vote. That would put things on track for a final vote the following week.

Americans Don't Want Senate's Health Care Plan, But It's Unclear What They Do Want

Were this bill to pass the Senate, it would then have to be reconciled with the House's attempt to repeal and replace Obamacare, known as the American Health Care Act.

A summary of the bill is embedded below. You can read the full draft here, and see the previous Senate version here.

This report has been updated to reflect that the extra $70 billion for stabilization funding will be in part used for helping insurers defray the costs of high-risk individuals.