Accessibility links
Donald Trump Met Some of Russia's Rich and Powerful At The 2013 Miss Universe Contest In Moscow After revelations about Donald Trump Jr.'s meeting with a Kremlin-connected Russian lawyer and a Russian-American lobbyist, investigators want to know more about the Trump Sr.'s Moscow sojourn. 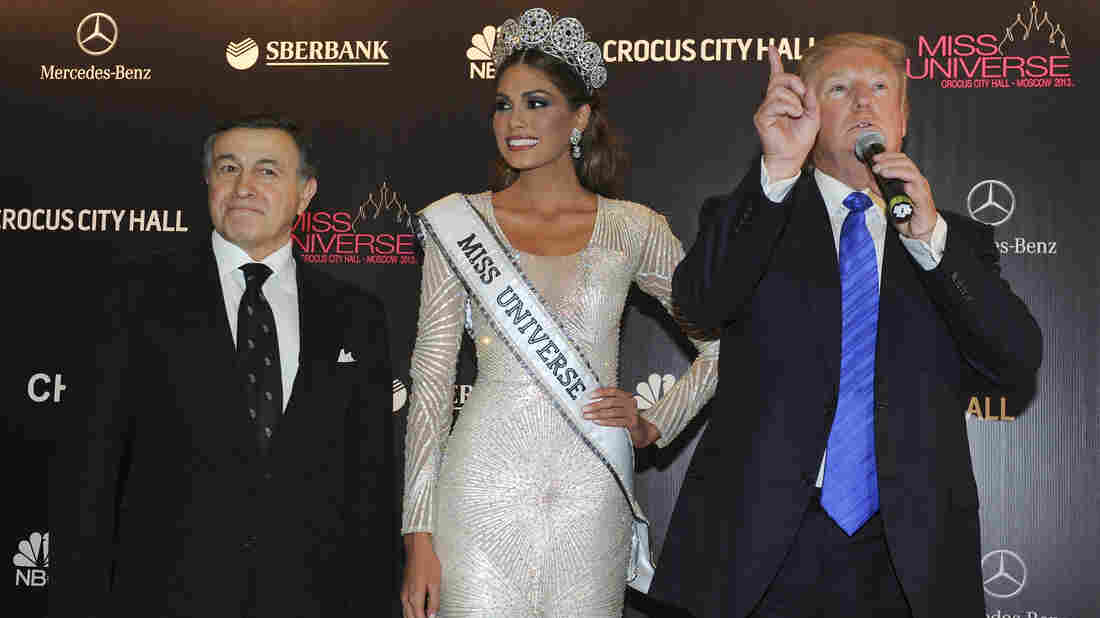 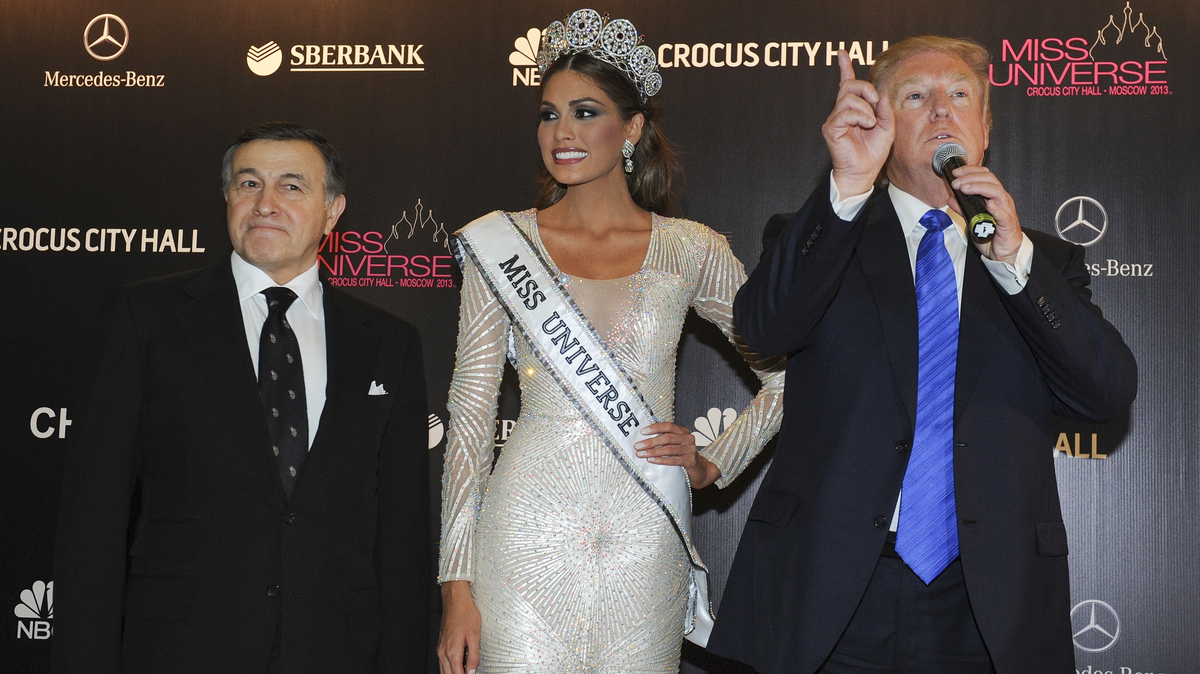 Russian businessman Aras Agalarov, left, Miss Universe Gabriela Isler and pageant owner Donald Trump at the Miss Universe pageant in Moscow in 2013. It was there that Trump — then the pageant's owner — spent several days hobnobbing with Russia's elite.

The political bomb that went off recently when Donald Trump Jr. revealed he met with a Kremlin-connected lawyer in hopes of getting damaging information about Hillary Clinton has raised new questions about the Trump family's connections to Russia.

And investigators are looking for clues in what might seem like an unlikely place: the glitzy November 2013 Miss Universe pageant in Moscow.

It was there that Trump — then the pageant's owner — spent several days hobnobbing with Russia's elite and getting to know a wealthy developer whose connections his son would later seek to capitalize on.

According to an email released last week by Donald Trump Jr., the developer, billionaire Aras Agalarov, offered to pass on information about Clinton from Russia's top prosecutor to help the Trump campaign. He denies the charge.

Trump was already well known in Russia when he decided to bring the pageant to Moscow.

"Everyone wanted to meet him, of course. He was like a big deal, and I'm pretty sure in Russia he was already a TV personality, so he was already famous," said Gabriel Rivera-Barraza, a New York-based publicist who served as a preliminary judge at the pageant.

The contest would be held at Crocus City Hall, a venue owned by Agalarov. The event would be a family affair: Agalarov's son, a pop singer named Emin, performed on stage and his wife was a judge.

The Agalarov family's involvement appears to have helped create some buzz for the pageant.

"Agalarov is somebody who's well connected. He would have been able to produce a lot of important people to come and watch the Miss Universe pageant," said Kathryn Stoner, a senior fellow at the Freeman Spogli Institute for International Studies at Stanford University.

Trump himself would later boast about the many highfliers he met in Moscow, during a 2015 appearance on Hugh Hewitt's radio show.

"I was with the top level people, both oligarchs and generals and top-of-the-government people. I can't go further than that, but I will tell you I met the top people," Trump said. 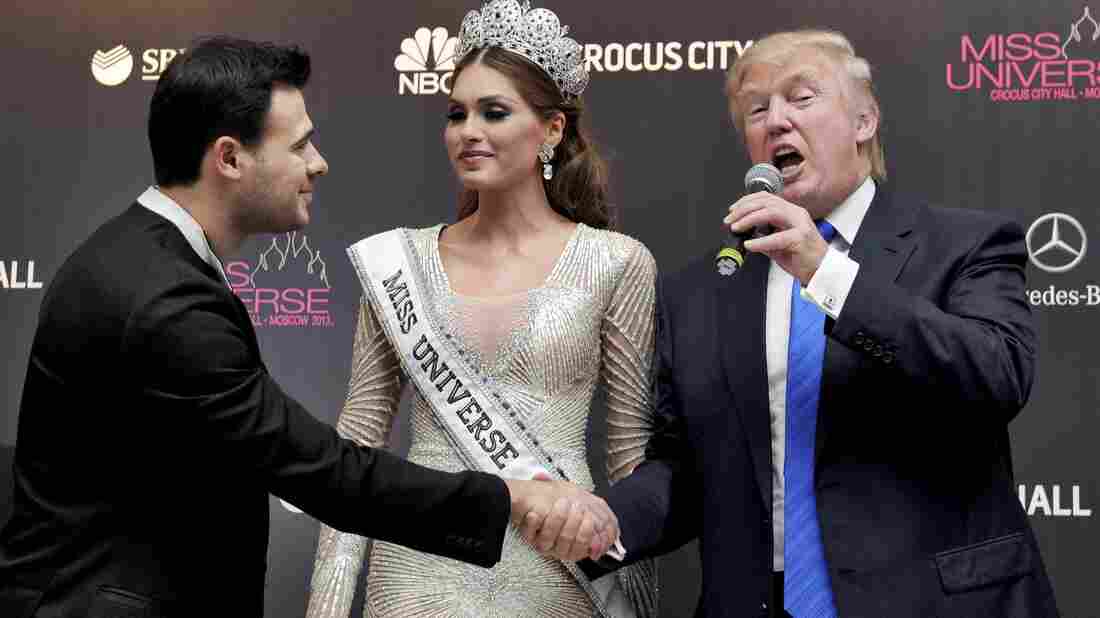 Trump would stay on good terms with the Agalarov family after the pageant, appearing in a music video with Emin and sending him a videotaped greeting on his 35th birthday. Irina Bujor/AP hide caption 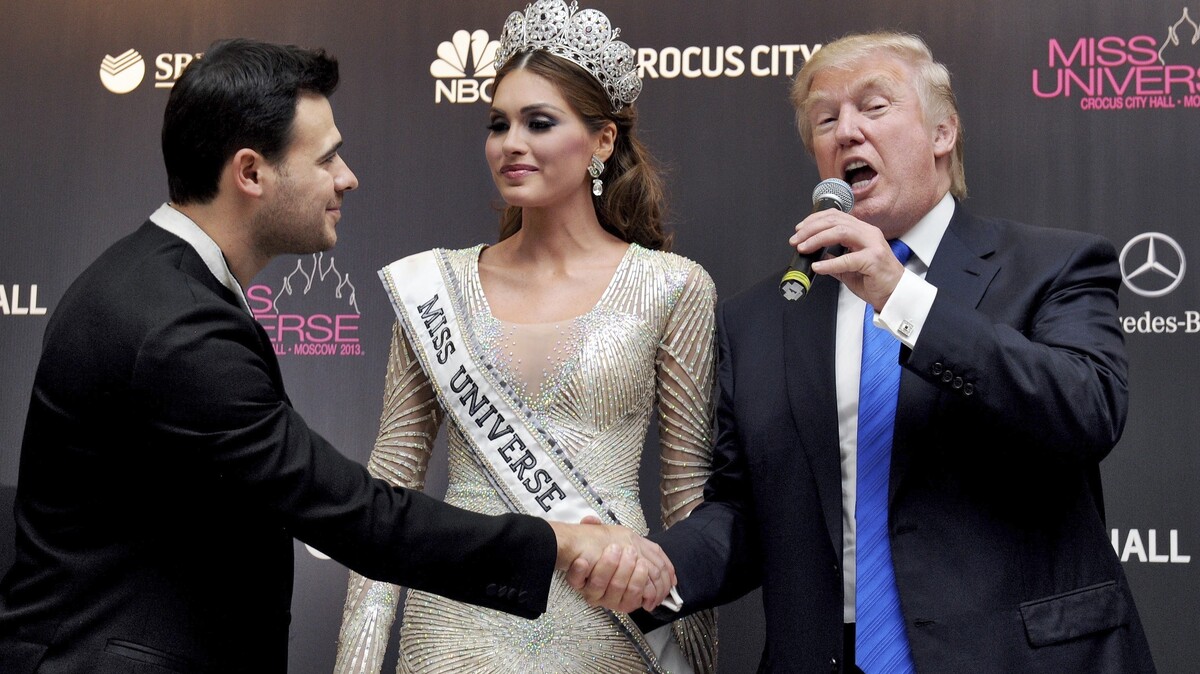 Trump would stay on good terms with the Agalarov family after the pageant, appearing in a music video with Emin and sending him a videotaped greeting on his 35th birthday.

For a while at least, it even appeared that Russian President Vladimir Putin might show up.

"There was certainly excitement within the organization, because the way that it had been described to us was that there was the likelihood that Putin would be attending," said MSNBC host Thomas Roberts, who emceed the event.

"We had to be certainly very careful. I was not allowed to make any type of political statement or go rogue," Roberts also said.

The pageant even warned Roberts and his co-host, Mel B of the Spice Girls, not to attempt to say any Russian words because a mispronunciation might offend Putin, Roberts added.

Trump himself seemed thrilled at the prospect of Putin attending, wondering in a tweet, "Will he become my new best friend?"

Do you think Putin will be going to The Miss Universe Pageant in November in Moscow - if so, will he become my new best friend?

In the end, Putin was unable to attend because of a last-minute visit from the King of the Netherlands. But Putin reportedly later sent Trump a gift — through Agalarov's daughter.

Trump would also stay on good terms with the Agalarov family, appearing in a music video with Emin and sending him a videotaped greeting on his 35th birthday.

Last week, Donald Trump Jr. acknowledged a June 2016 meeting with a Russian lawyer he was told had damaging information about Hillary Clinton. He said the meeting — which was also attended by the president's son-in-law, Jared Kushner, and then-campaign chairman Paul Manafort — was arranged by an acquaintance from the pageant later identified as music promoter Rob Goldstone.

In a subsequently released email, Goldstone was quoted telling the president's son that the information had been passed on to Aras Agalarov from Russian prosecutor-general Yuri Chaika.

The revelations have raised new questions about the extent of the president's ties to the Agalarovs and generated more speculation about the 2013 Miss Universe pageant, said Rep. Eric Swalwell, D-Calif.

"We would like to know what happened on that trip, whether... he met with any Russians connected to Russia's intelligence service, and also to clear up just when did he meet with Vladimir Putin?" said Swalwell, who sits on the House Intelligence Committee.

"By his own words during the campaign he said he had met with Putin, and when confronted, when Russia later became an issue, he backed away from that. So I think getting more clarity on that would be helpful to us," Swalwell said.