Accessibility links
Book Review: 'At The Table Of Wolves,' By Kay Kenyon Kay Kenyon's new thriller is set in an alternate-history version of World War II, where the traumas of the previous war caused a bloom of psychic talents — talents the Nazis want to exploit. 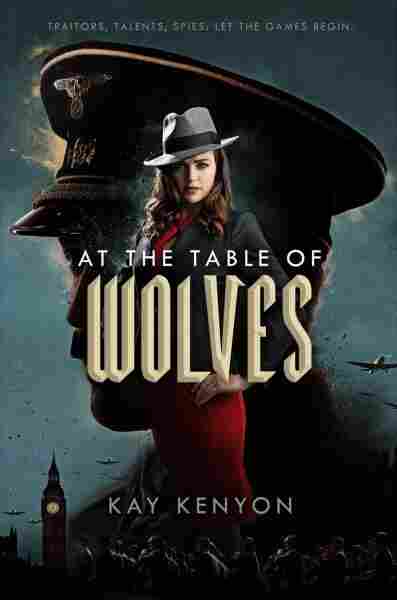 At the Table of Wolves

Title
At the Table of Wolves
Author
Kay Kenyon

"Earlier that evening, she had found an old revolver in her father's room. But she had left it where it lay, for what good would it do to carry it? If it came to guns, her enemies used them better."

Which is true, absolutely. If it comes down to a gun battle, Kim Tavistock, heroine of Kay Kenyon's new novel, At The Table Of Wolves, would be completely outmatched. Same could be said for a fistfight, a strident argument, a mild disagreement and, in one case, a walk over uneven ground in a sudden snow. She is a woman who, while strong, opinionated and independent, seems uniquely unqualified for just about any conflict.

Which is why, of course, Kenyon turns her into a spy against the Nazis.

But the above? None of that is a criticism. Most of it could be said about any great fictional spy (James Bond excepted, though he's really more superhero than spy). The greatest spy in the history of literature, John LeCarre's George Smiley, likely couldn't run for a bus or fight his way out of a knitting circle. But he has different strengths. As does Kim. And it is the weaknesses — the things that a main character can't do — which make spy stories fascinating.

Kim is a journalist on the outs — back in England after years in America, reuniting with her cold, distant father as the country inches closer to World War II. She cares more for animals than she does people, is overwhelmed by the restoration of the family's country house, seems quite often on the harumphy edge of a snit.

But she does have one thing going for her: Because Kenyon's book is not history but alternate history, she gets to mess with the ways of the world. And in her universe, the overwhelming trauma of WWI brought about a blossoming of psychic talents in the human race. So now there are people who can make things explode with their minds. People who can conjure storms. People who can move things, read thoughts, make ice or fire. And then there's Kim. Her talent? The Spill. People tell her secrets without meaning to. They can't help themselves. Nice trick for a journalist, sure, but even better for a spy.

Kenyon does a fine job of cranking the tension and making the mounting stakes plain. With each chapter, there is another complication, another side to a character revealed.

It's a good setup, and at it's heart is that question, as old as human imagination, "what if..." What if the Nazis invested all their time and energy into developing these psychically talented people into weapons? What if Hitler got a big jump on the more reserved and demure British who, just recently, have begun exploiting talents under the Official Secrets Act, at a place called Monkton Hall? What if Kim Tavistock ended up there, with her talent for acquiring secrets? And what if this completely unprepared woman suddenly became one of the most important spies that England has when it becomes apparent that the Germans are putting together a plan to invade England?

The book starts slow and rote. Creaky house, leaking pipes, a groundskeeper, his wife — the family cook — and their daughter Rose, who is special in her own way. Kim as a fish out of water, lying about doing a series on traveling in England to cover her trips to Monkton Hall and the small intrigues happening there. But Kenyon does a fine job of cranking the tension and making the mounting stakes plain. With each chapter, there is another complication, another side to a character revealed. She breathes an extraordinary amount of life into all of them as she judiciously shares perspective between Kim (who gets most of the chapters), her father Julian (who may or may not be a Nazi), and Rose, the groundskeeper's daughter (who gets the best reveal of the book, and the best twist).

And yes, there are spies, moles, double-crosses, escapes and secrets — all the stuff of spy novels. But At The Table Of Wolves is a story where most of the action is social, taking place over tea, scotch, supper and on street corners. It is a story where everyone knows one piece of the plot but no one knows all of it. And Kim is at the center of all of it, trying to put the pieces together before it's too late.

The irony is, in a story where so much depends on character, on conversation, on trust and faith and the delicate emotional lattices that exist between people, the plot mechanics of At The Table Of Wolves essentially hinge on people not talking. Because everyone knows something. Many of them are, knowingly or not, working for the same ends. And if, at any point, nearly any of the main characters had simply made a phone call or sat down for a cup of coffee with any other main character, all of England's most pressing problems could've been solved.

None of this ruins the story. There are reasons for some of this hesitation to speak, but it is the preponderance of moments that bothered me, and the sense that everyone could've been saved a lot of trouble with just one honest conversation between two people.