Accessibility links
As Coal Jobs Fade, A Mining County Struggles To Redefine Itself Somerset County in southwestern Pennsylvania is deep coal country. For years, it's been looking to remake itself. Wind energy and health care may be its future — if it can attract qualified workers. 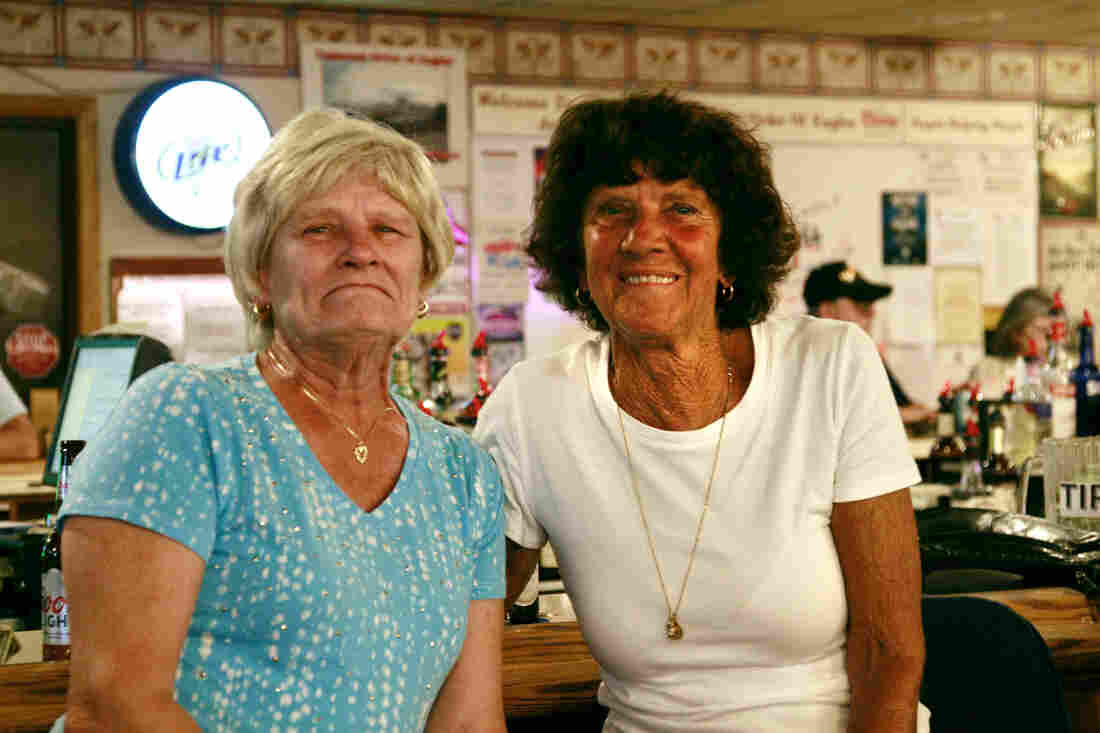 What opportunities are there for a coal-mining community after its main industry has waned?

In Somerset County in southwestern Pennsylvania, that's not an easy question to answer. For this county of roughly 76,000 residents, renewable energy and health care offer hopes for its future. But first it has to attract qualified workers.

Coal was once the economic backbone in Somerset. For years, thousands of county workers would head to dark, narrow mines. But the price of coal declined as cheaper natural gas became available. Tighter pollution control made mining more expensive. Mechanization shrank work crews. Many also blame the Obama administration's clean power policies for shaking investors' confidence. As a result, several coal companies went bankrupt and laid off their workers.

A Bother, A Brotherhood: Living Among The Mines In Coal Country

Coal reached a 30-year low in 2015. According to the Bureau of Labor Statistics, the number of miners fell nationwide from 90,000 in 2012 to 50,000 in 2015. For years, thousands worked in mining in Somerset County. But now the industry employs fewer than 700 people, which is down by half from five years ago.

Coal wasn't the only industry to dwindle in Somerset. In recent years, mainstay factories — from garden hoses to pop-up campers — in Somerset have shuttered. As its cornerstone industries faltered, the working class sought opportunity beyond the county.

Coal had once provided for them, and many hoped it would one day again.

In June, residents welcomed a new mine — called Acosta Deep Mine — for the first time in six years. For many, the mine is reminiscent to a time that once was; a remembrance of the brotherhood of coal mining and economic stability.

In reality, Acosta Deep Mine is expected to provide only 70 jobs, Corsa Coal says. Instead of bringing a new era of economic stability, the mine changes little in Somerset County. And residents are not shy about discussing their county's shortcomings.

"Our kids all leave," Elaine Latuch, 70, a homemaker, tells NPR's Steve Inskeep in one of two stories about Somerset that aired earlier this month. Latuch, sitting by the smoke-filled bar at the Fraternal Order of Eagles, is matter of fact when she discusses the county's problems. And she's surrounded by friends who echo the sentiment. "There's nothing here for them," she says.

(Left) For Barron Trucking, the opening of the mine has increased business. (Right) Jen Barron, who works at Barron Trucking, says they have brought on more mechanics since the mine opened but that it is still hard to find workers. Laura Roman/NPR hide caption

For Barron Trucking, the opening of the mine has increased business. Jen Barron, who works for her father's company, says they have brought on more mechanics since the mine opened. But she says it's still hard to find workers.

"The working class moved," Barron says. "Their jobs were gone."

"The working class moved. Their jobs were gone."

Around the county, "help wanted" signs hang in most windows. Barron is desperate for good workers who can work tough trucking shifts.

"Trying to find a blue collar worker in this area that can pass a drug test is the biggest challenge," Barron says.

The problem isn't a lack of jobs, but rather a lack of qualified workers. This is a common complaint in Somerset.

"Being rural like this, that can be a challenge at times," Jeremy Rogers says.

What Can Bring Jobs To Coal Country?

He moved to Somerset in 2010 to work for a medical device company, which employs 300. Finding qualified engineers is a problem, Rogers says, and many times positions remain unfilled.

Though Rogers expresses difficulty in finding highly skilled workers, in most other respects, business is going well.

"We do about $150 million in revenue here in Somerset," Rogers explains. Business is growing, and for some lower-level jobs, applications are on the rise.

"For the general equipment assembly positions that we fill, we probably get 80 applications for every one opening," he says. 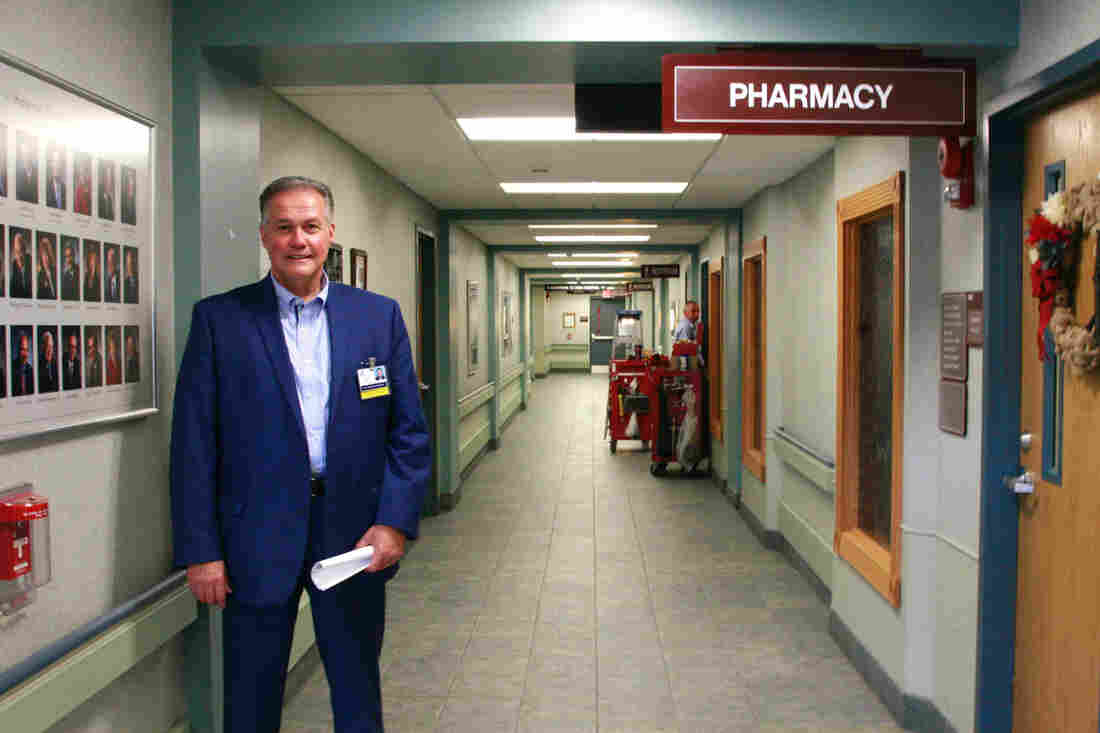 Craig Saylor, CEO of Somerset Hospital, says that even for one of the biggest employers in the county, the hospital often has trouble hiring people. Laura Roman/NPR hide caption

Health care is another promising industry in Somerset. Somerset Hospital employs around 900 people who care mainly for the aging population. Craig Saylor, the hospital's CEO, says that even though it's one of biggest employers in the county, it often has trouble hiring people.

"We average about 30 openings in our hospital at any given time," he says. "We do not have a job shortage, we have a labor shortage."

The hospital is actively working with the Somerset economic council and local high schools to provide health care training for young workers as well as displaced workers, like coal miners. 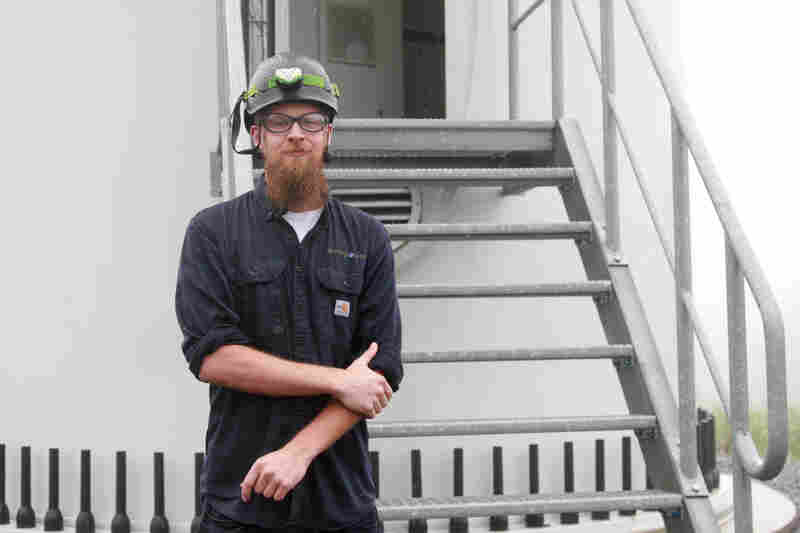 Erik Widner grew up in Somerset County but left to go to college and then returned to manage wind turbines on at Somerset Wind Farm. Laura Roman/NPR hide caption

For this rural community, the hospital is a lifeline. Many rely on it for a wide range of health needs — from general care to orthopedic surgery. For some, traveling across the state isn't an option.

"We have a largely senior community that does not want or cannot travel," Saylor says. Seniors depend on government health care. He says up to 80 percent of patients rely on Medicare or Medicaid.

If Medicaid spending was restrained, employees would have to take a pay cut or the hospital would need to absorb what he calls the "loss of care."

As coal faded in Somerset, another energy resource made its debut: wind turbines. Along the rolling hills of green farmland stand a few 100-foot-tall wind turbines.

Erik Widner grew up in Somerset but left to go to college and then returned to manage 68 EverPower wind turbines in Somerset.

"There's a lot of young people that are just leaving the area," he says.

These turbines were built in 2011 and became operational in 2012.

"With the wind industry coming in, there are a lot of good-paying jobs for technicians," Widner says.

In fact, wind turbine technician is the fast-growing occupation in the United States, according to the Bureau of Labor Statistics.

It seems unlikely that one industry can dominate Somerset like coal once did, and as the county looks to reinvent itself, it is sowing seeds of a more diverse economy.