Accessibility links
Stream Elvis Presley's Rare Early Recordings, 'A Boy From Tupelo' Stream a collection of rare early recordings, including a never-before released version of "I Forgot To Remember To Forget." 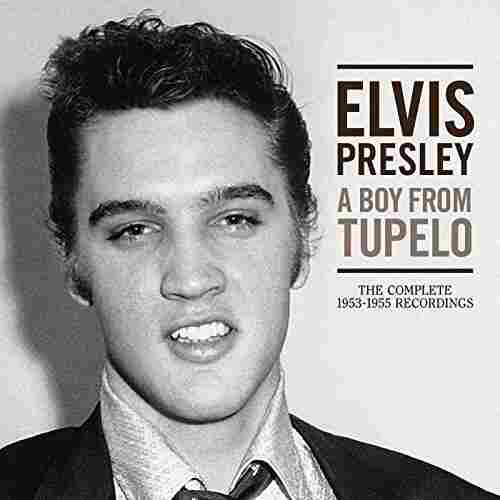 Elvis Presley, A Boy From Tupelo: The Complete 1953-1955 Recordings. Courtesy of the artist hide caption

Think of this three-disc set as The Rise of Elvis Presley: The Granular Detail Version.

The fabled personal recordings young Presley paid Sun Records $3.98 to make are here. The very early singles are all represented as well – and they've been put through a magical audio scrubber and buffed to diamond clarity. The set includes every available studio outtake, and some choice banter between takes. Naturally there are live performances, among them a rousing (and previously unissued) "I Forgot To Remember To Forget" from a 1955 Louisiana Hayride radio broadcast.

Cue the doubters' chorus: Haven't we been sold much of this stuff several times before?

Yes, we have. This is just the latest exhaustive dive into the unlikely beginnings of an icon whose cupboard gets swept for stray crumbs every few years, just to keep the myth alive. But this collection is different in a few crucial ways: The sound is astonishing, and there's an accompanying 120-page book that offers a lovingly researched account of every step along Presley's path from Tupelo to stardom.

Delightful in a way most catalog projects are not, A Boy From Tupelo presents the well-known biographical details from the Presley trajectory as they unfolded, week by week, with galvanic musical accidents followed by unremarkable contract signings and radio station visits. The timeline begins on July 4, 1954, with Presley visiting guitarist Scotty Moore's house to go over songs for a tryout session at Sun. The next day's session began with the torch songs they'd rehearsed, but soon detoured when Presley, between takes, sang a jittery reworking of Arthur Crudup's "That's All Right." Moore recalls that he and bassist Bill Black got swept up in Presley's "acting the fool," and eventually caught the attention of Sam Phillips in the control room, who told them "Back up, try to find a place to start, and do it again."

You Need To Watch These Cockatoos Listening To Elvis

Just savor this twist of fate. Presley shows up for his first big recording session expecting to sing tender romantic songs. On a whim, he starts "acting the fool," and the band follows, chasing a twitchy mix of rockabilly, R&B and country that was utterly new. Suddenly that became the art.

The book provides this kind of specific context for most of the highlight reel moments of Presley's time at Sun. It suggests that what can seem, in the biopic version, like an overnight success, is often something more routine: There's day-in and day-out work involved in developing a musical trademark. The blazing neon meteor of sound we associate with Elvis at Sun was also the story of a Crown Electric deliveryman making the transition to full-time musician, and figuring out how to present himself on stage.

Not all of this "process" stuff can be considered essential, but many of the studio alternates are worth hearing. The crew spent a long time pursuing a very particular stargazing mood on "Blue Moon of Kentucky," and the alternate takes show how they refined it, with Moore eventually doing muted guitar percussion to keep time. The live performance disc is arguably even more revealing, as it shows how quickly Presley grew into his role: Just a few weeks after the release of "That's Alright Mama," the 19-year-old Presley appears on the Louisiana Hayride to deliver a version of the song that bubbles over with teenage irreverence. It was just another gig in a career of thousands, but as this set makes clear, sometimes an ordinary gig (or song or clowning moment) can trigger a cultural contagion.