Accessibility links
'The Untamed': A Tale of Sexual Repression And Violence With Sci-Fi Trappings Don't focus on the space-squid: In Mexican director Amat Escalante's harrowing film, it's only a device to expose and explore the rifts in his characters' relationships.

'The Untamed': A Tale of Sexual Repression And Violence With Sci-Fi Trappings

'The Untamed': A Tale of Sexual Repression And Violence With Sci-Fi Trappings 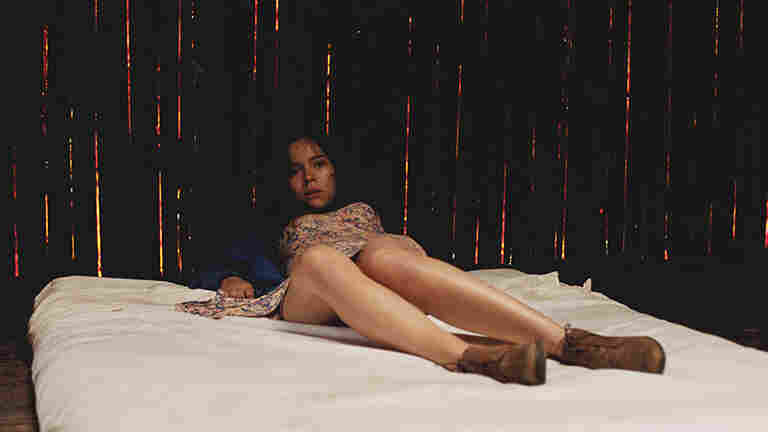 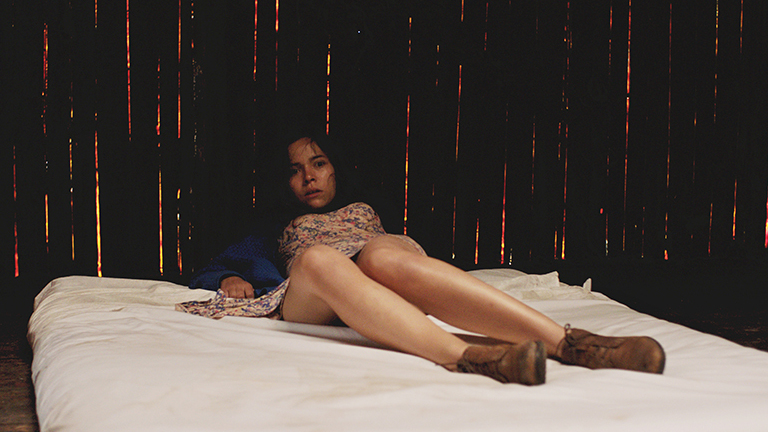 Alejandra (Ruth Ramos) visits a certain cabin in the woods in The Untamed.

It's pink and fleshy, it's a giant mass of tentacles and it's just crash-landed in Mexico from outer space. What should humankind do with such a marvel?

How about The Nasty?

Welcome to the artfully perverted world of La Región Salvaje (The Untamed), a psychological fantasy thriller about what it would be like to have sex with a freaky squid-alien thing. Turns out it's good in bed. Like, really good. As soon as the nameless, faceless creature wraps its appendages around its... er, "partner," some kind of animal instinct for pleasure takes over, sending the human convulsing in a state of continued, heated orgasm that will henceforth make regular, non-tentacle sex seem boring. Likely a factor: The thing has no mouth, so there is no awkward pillow talk.

But rest assured, there's a reason why this film is being released in art houses and not in the darkest corners of the Internet. Director Amat Escalante, who co-wrote the script with Gibrán Portela, treats his extraterrestrial kink machine as a metaphor for primitivity. It also serves as the secret sauce in a much more grounded story about the interconnected, damaged relationships that exist between four people. The beast only comes out at rare intervals, and always to serve a specific narrative: namely, that the purest pleasure tends to come as a package deal with pain, both literal and figurative.

After a quick glimpse of the alien in action, we get a disorienting jump into the life of an unhappily married young couple. Alejandra (Ruth Ramos), a working mother of two, receives no pleasure from her construction-worker husband Ángel (Jesús Meza) — only barely contained anger and contempt. And it's no wonder, because the aggressively macho Ángel is secretly having an affair with his brother-in-law: the slight, doe-eyed Fabián (Eden Villavicencio), whose fatalist demeanor seems to know from the beginning how this will end up for both of them.

It's the introduction of Veronica (Simone Bucio), a pretty, sex-starved loner, that sets off the sirens. After getting Fabián to treat a wound she seems to have picked up from the creature, Veronica comes onto him immediately; then, when she realizes that neither she nor any other lover can give this melancholy man what he needs, she sends him off toward the pink thing, which two older scientist friends are keeping in a secluded cabin in the woods. (Naturally.) Shortly after, Fabián is found naked and comatose in the mud... and when Alejandra finds Ángel's text messages on his phone, combined with the fact that Ángel was seen with him not long before his disappearance, it's enough to assume the worst of her husband's role in all this. There's another layer of social commentary here, since Ángel's environment has been a repressive force on his sexuality — as have his parents, wealthy local moguls who would probably be more willing to accept a tentacled son than a gay one.

Escalante, a protégé of Carlos Reygadas, previously shocked Cannes audiences with his nightmarishly violent 2013 drama Heli, a grim piece on Mexico's drug cartels that left none of their depravity to the imagination. Here, the elements of camp fantasy disguise the fact that this movie, too, emerged from a dark undercurrent of Mexico: It was inspired by two local news stories, one about a hospital worker who was drowned for being gay and another about a woman who survived an attempted rape only to be labeled a "slut" by the papers. A carefully controlled tone, which never jumps into full-blown luridness despite ample opportunity to do so, helps us believe in the severity of the situation and the struggles of the characters. Just when we think we're heading for late-night Cinemax territory, we jump to a tender scene of Alejandra putting one of her young sons to bed after a late-night scare.

The visuals depict such domestic scenes, as well as the harrowing discovery of Fabián's weak, pale and nude body, with a washed-out naturalism that keeps us unbalanced. In fact, the film's look signals that this, the "real world" of working-class parenthood, sexual repression and pointless, preventable violence, is where Escalante's attention truly lies, and not with the slimy sex beast or the animals at the impact crater who can't stop humping each other. There's certainly some degree of indulgence (a very long dolly zoom onto a crotch, for one), but the weird sex stuff is kept to a minimum. And yes, that's a good thing.